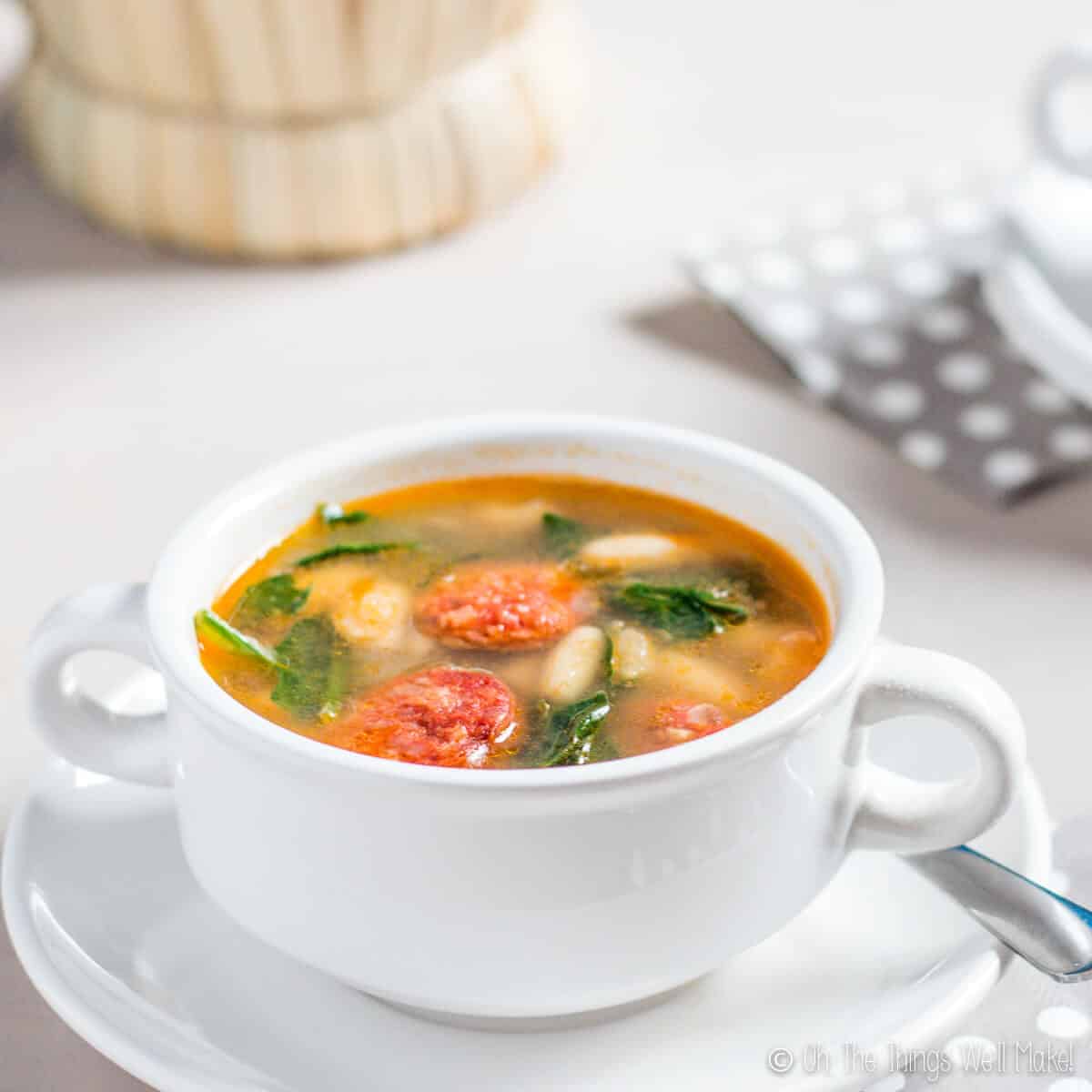 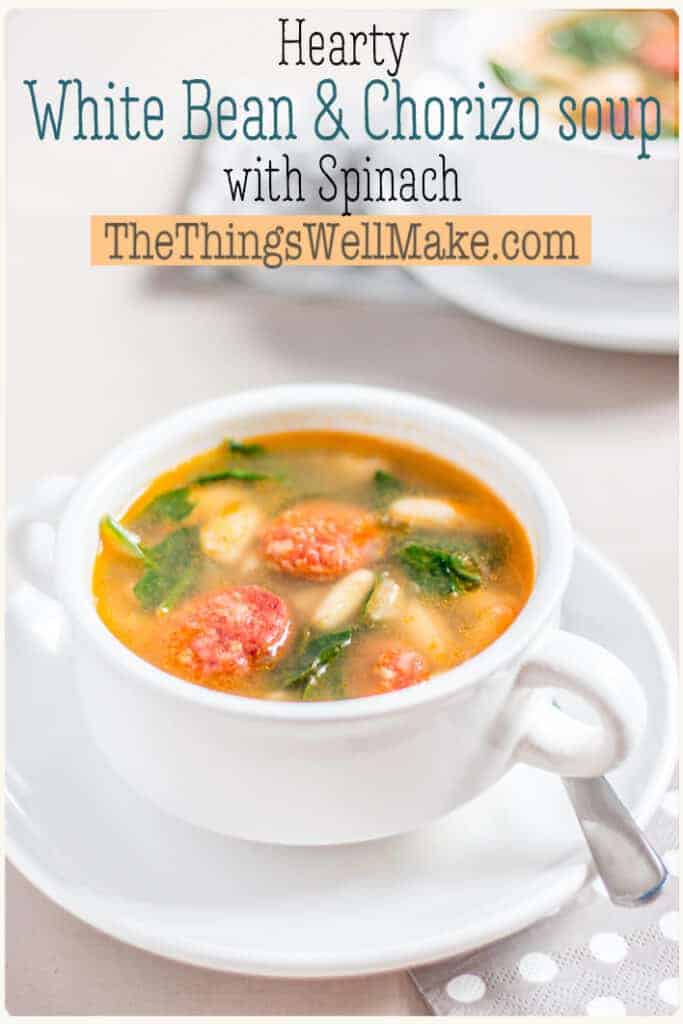 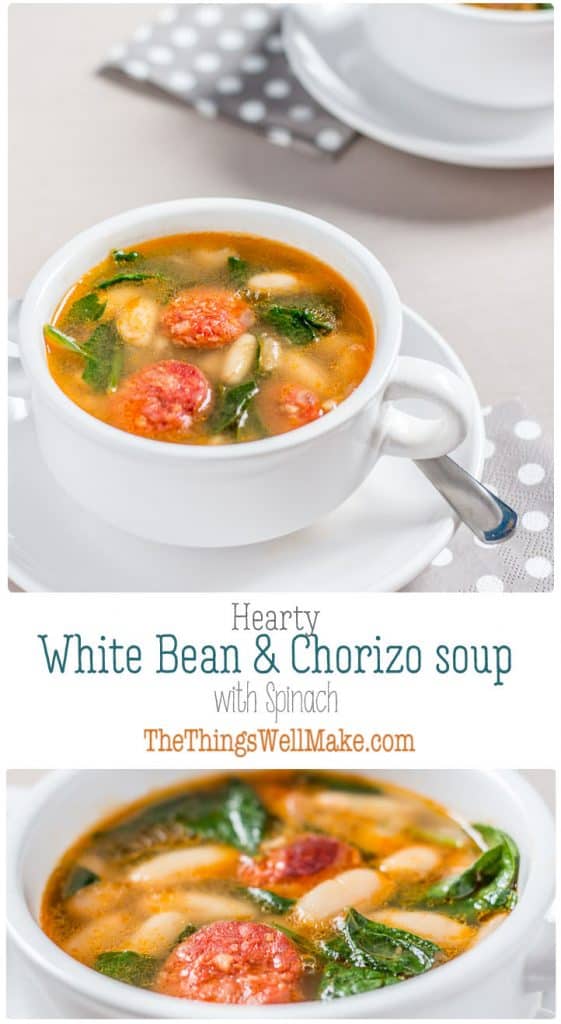 The perfect, hearty soup for a cold, rainy day, this white bean and chorizo soup with spinach is a flavorful comfort food that you’ll want to make again and again.

Now that the cooler weather has arrived, I’m craving more soups and stews and have been making lots of homemade stocks and homemade bone broth. Eating broths plain, though, can get boring.

The other day I decided to throw together a soup with what I had sitting in my fridge at home. I live in Spain, of course, so what I have in my fridge might be a little different than what you normally have in yours. I just happened to have some chorizo sausages, and love the way they add flavor to soup.

This soup is simple to make, with just a handful of ingredients. It’s mainly a white bean soup made from small white beans like the navy bean and some broth. (I usually use homemade chicken broth made from the leftover bones and bits from roasted chickens and turkeys.)

To add some flavor and a touch of color, I added chorizo to the soup. Here in Spain, it isn’t uncommon to add chorizo to dishes made with legumes like lentils and beans. (Fabada Asturiana, a typical dish of the North, is an example.)

I wanted to make something lighter, though. So, rather than add in more fatty meats and sausages, I used spinach. The Spinach adds color, and some healthy vitamins and minerals.

Which chorizo should you use?

To give this soup a Spanish flair, I think Spanish chorizo is the best option for this soup. There are two type of chorizo here in Spain, fresh chorizo, which needs refrigeration, and dry-cured (that doesn’t). Either works well in this dish.

Spanish chorizo is normally made with a few simple ingredients: pork, garlic, salt, and smoked paprika. The smoked paprika, or pimentón de la Vera, can be spicy or mild. Using smoked paprika is probably the main difference between Spanish and Mexican chorizo. Mexican chorizo not only lacks the smoky flavor, but it can also be beef-based or combine the two types of meat.

If you can’t find Spanish chorizo where you live, it’s actually quite simple to make your own Spanish chorizo! (Yes, even though I can easily find it here, I like to occasionally make my own.)

Adding in the greens (Spinach or Kale?)

When it’s cold in the winter, I don’t eat as many green salads. My veggies tend to be roasted veggies, homemade kale chips, or vegetable soups like my roasted pumpkin soup.

Adding spinach to a soup like this one is a great way to get in some healthy greens in the winter. The Spinach wilts in the soup and gets smaller so you can add quite a bit of it. It also adds vitamins and great color too!

If you prefer, you can add kale instead. It’s a superfood that also packs in a nutritious punch!

What about the white beans?

This soup can be made with a variety of white beans. I like using smaller white beans like navy beans. I also prefer using dry beans rather than cans.

If using dry beans, though, you’ll need to plan ahead to have time for pre-soaking the beans. The soup itself will also take longer to cook.

If you’re crunched on time, you can definitely use store-bought, pre-cooked beans. That said, I really prefer to plan ahead and make everything from scratch. Not only is it cheaper, but you can avoid the possible endocrine disruptors found in canned foods. If you are buying pre-cooked, I suggest choosing jars over cans!

Making the soup is simple, but you’ll have to plan ahead if you want to make it from scratch.

The night before you want to serve the soup, soak the white beans in plenty of filtered water. The beans will absorb the water and increase in size by quite a bit. So, use a large container and add lots of excess water.

I used to use a large water jug, but I now use large bowls instead. If you use a narrow container, the beans can get wedged into place when they expand in size, making them harder to remove. Using a wide container like a bowl simplifies things.

This soup can be made in either a pressure cooker like the Instant Pot, or over the stovetop.

The next day, after soaking the beans overnight, strain the excess water off the beans and give them a good rinse.

I used to cook the chorizo separately, towards the end of the beans’ cook time. I then added the chorizo to simmer with the beans for a few minutes before serving. Now, though, I’ve found that it’s easier to pan-fry the chorizo before adding the beans and broth and cook them together. (You can even skip the pan-frying if you really want.)

The real advantage of pan-frying the chorizo is that you can drain off some of the excess fat which can tend to form a layer of grease on the soup without really adding more flavor.

To save time and having to clean extra pots and pans, I directly pan-fry the chorizo in either the soup pot or the pressure cooker. Most pressure cookers will have a setting for sautee-ing. Once cooked, you can drain off some of the excess fat and add in the beans and liquid.

If using a pressure cooker, add around 4 cups of a stock or broth. You can use bone broth, vegetable broth, or chicken broth made from the bones after roasting a chicken. The liquid should fully cover the beans. If not, add a little water to your pot.

If using a pot on the stovetop, simmer for around an hour and a half and check the beans for tenderness. Add in extra water as needed to maintain the desired consistency.

Shortly before serving, add a few handfuls of spinach to the soup. Let the spinach wilt, adding more as it wilts and creates space, if desired.

Taste the soup and add seasonings like salt, freshly ground pepper, and possibly some smoked paprika to taste. It’s now ready to serve!

In my region of Spain, one of the typical rice dishes is called arroz con habichuelas. It is a rice dish which includes white beans and chorizo and isn’t served “dry” like a paella, but rather retains some of the broth like a soup.

This soup could be made in a similar way, adding in some rice. If you want to make this soup with rice, you should add in the rice towards the end, when you have 20-40 minutes left in the cooking time (depending on the type of rice you are using). You’ll also have to add more broth or water. 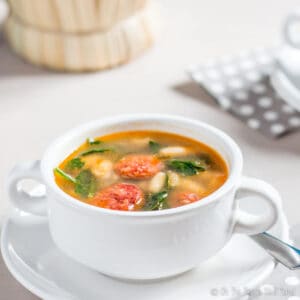 The day before, if using dried beans

Preparing the soup, the day of serving

I usually make this soup with small white beans like navy beans. You can use other legumes too. Just be sure to adjust the cook times accordingly. Kale, or even nettles, can be used in place of the spinach.

I use Spanish chorizo in this recipe because it adds a smoky flavor which comes from the smoked paprika, or pimentón de la Vera, used in Spanish chorizo. Either fresh chorizo or dried-cured chorizo can be used.

If you don’t have access to Spanish chorizo, you can make your own chorizo. If you don’t want to make the sausages, you can make simple chorizo-flavored meatballs instead. Follow the chorizo recipe and mix together the ground pork, salt, garlic, and smoked paprika. Rather than pressing the mixture into sausage casings, it can be rolled into meatballs. If you are using Mexican chorizo, consider adding some smoked paprika to the recipe, for flavor.

Don’t have time to pre-soak and cook the beans?

Yes, you can use jarred/canned beans instead. The soup can be made in under 20 minutes if using pre-cooked beans. Just pan-fry the chorizo, add the beans with some broth, and cook until the chorizo is fully cooked and the beans are fully heated through. Add the spinach at the last minute.

This soup has been featured in the community e-cookbook, Winter Soups, along with more than 50 soup recipes from real food bloggers.

Read more about it or buy here.

This post was originally published on December 6, 2013. It was rewritten and published again in January of 2021, adding new photos, clearer instructions, and video.

Authentic Spanish Tortilla Recipe
Next Post: How, Why, and When to Cure Soap?