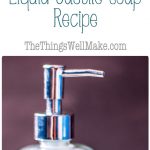 This DIY liquid castile soap recipe is easy and inexpensive to make. It’s a great multipurpose cleaner, perfect for both your body and around the house!

A couple of years ago, I showed you how easy it was to make a basic beginner soap, even if you’ve never done it before. I understand why making soap can sound intimidating, but once you give it a try, it can become very addicting. Seriously, not only is it a pretty thrifty hobby because you can make large batches that will last you a long time, but it’s fun to be able to customize the soap to be exactly the way you want it and not depend upon what’s on the market.

Even if you’re just a beginner, it’s easy enough to change up your soap by only using different essential oils, or exfoliants like poppy seeds, or other fun ingredients without having to do a lot of research into making a new viable recipe. As you get more experienced, you’ll probably want to take things a step forward and make new recipes of your own and add in milk or pumpkin or spices and colorants. Once you learn how to use a soap calculator, that isn’t really that difficult either.

But maybe, you’d just prefer something a little different?

I’ll have to admit that I was making soap for a very long time before I started making liquid soaps and coming up with a DIY liquid castile soap recipe for you to try. There aren’t as many resources available for making liquid soaps, so it’s a bit of trial and error at first, but once you find a recipe that works out well, it’s pretty simple to make. While it does take a little more time and effort than whipping up a batch of bars of soap, I think you’ll find that it’s well worth it, especially when you take a look at the price of a store bought liquid castile soap.

I want to call special attention to something. When making liquid soaps, you use KOH, potassium hydroxide, rather than NaOH, sodium hydroxide, the lye used in bar soaps like my easy, beginner soap.

What is castile soap?

Technically, Castile soap is a type of soap made with only olive oil, whose name originates here in Spain. (You can read more about the origin of Castile soap and other other soaps in my recipe for pure Castile bar soap.) Over the years, the definition of Castile soap has broadened to include other types of vegetable oils such as coconut oil. Dr. Bronner’s Soap, which has probably become the most famous commercial liquid castile soap, even has a greater percentage of coconut oil than olive oil.

When it comes to making a homemade castile soap, though, I was a bit of a purist, and wanted it to be the real deal and made with only olive oil.

Why did I decide to make a pure, liquid castile soap?

The great thing about liquid soaps over bars of soap, is that it is very versatile and you can make several different types and then mix them to the perfect combination for you after having made them!

Soaps made with different oils have different properties.

The ideal solution would really be to combine different oils when making your soap to get the qualities you want from the various oils you use. That’s exactly what they did when they formulated Dr. Bronner’s soap, and what I did when I showed you how to make a basic beginner soap using a combination of olive oil and coconut oil.

When you’re making a bar of soap, you have to decide what combination you want to use from the very beginning, and your entire batch will have that very same combination.

With liquid soaps, though, you have the advantage of being able to combine your various soaps after the fact, making it easier to experiment with smaller combinations until you find the perfect soap for your need.

The other great thing about making liquid soap is that, unlike with bar soap, you can also add in your additives like essential oils after the fact. This means that you don’t have to divide your batch at trace and work quickly to mix in your different essential oils to each part before the soap sets up. I, instead, make a concentrated liquid soap base, and as I dilute it and mix it using soaps made with various oils, I also decide what essential oils I want to add. This gives me the freedom even months after having made my soap base, to play with fun combinations.

So have I convinced you to give it a shot?

Once you have made your soap paste, you’ll need to dilute it as needed to get your liquid soap. For that, you’ll need to take some of the paste and let it dissolve into water over the course of several hours or over the stove. I used distilled water for my liquid soap to help make sure it will last as long as possible, but for small batches that are going to be used relatively quickly, you can probably get away with tap water without any issues. You can read more about how to dilute a soap paste here.

When I made my first batches last fall, I diluted my various soaps into thick, clear liquid soaps, but was disappointed to find that a week or two later, they started to turn opaque and much thicker.

Why did my DIY liquid soap turn opaque?

It turns out that as the weather got colder, my soaps turned more opaque and thicker just like coconut oil solidifies when in a cold environment!

I wouldn’t have been surprised that the coconut oil soap did that, but my beginner liquid castile soap did the exact same thing!!

I had my suspicions that that was the issue, but wasn’t able to confirm it until this spring when some of my thicker liquid soaps, left as is as an experiment, turned perfectly clear and beautiful again. (update: this winter, my soap has become very thick, opaque and a bit gloopy again. Keep this in mind if you are making this soap in winter!)

So, does that mean you can’t use homemade liquid soap in the winter/cold environments?

You can still use your soap, you’ll just need to dilute it a little more. I haven’t provided an exact amount of water to use for dilution because I’ve found that it depends upon the temperature outside, and what I’m looking for in consistency for each particular use of the soap.

I was curious to compare, so I recently bought some of Dr. Bronner’s soap to compare with mine, and I have noticed that the soap I bought was also quite a thin, diluted consistency. After some reading, I’ve learned that most commercial liquid soaps are later thickened with added ingredients. I prefer to keep mine as natural as possible, so I leave it as is… diluted until transparent and usable in a soap pump.

In the winter, then, my soap is a little bit thinner than it is in the summer, but that isn’t a problem for me.

Why did I add glycerin to the recipe?

This question has come up several times, so I thought it was best to update this post with an answer.

When I first wrote the post, I had studied several methods of making liquid soaps. One is called the glycerin method, and replaces part of the water with glycerin. In theory, that is done to help move the process along and make the liquid soap paste process more quickly. Because this was meant to be a beginner liquid soap recipe, I wanted things to be as quick and fool proof as possible, so I chose the glycerin method.

In the end, I don’t know if it really makes the process quicker and easier or not, but I have found several benefits to adding glycerin to the recipe:

I mix all of the ingredients together, and keep a bottle in the shower to use instead of shower gel.

I like to switch up the essential oils used in each batch, and have so far tried adding lavender essential oil with a bit of tea tree oil in one batch, and a citrus blend using lemon and bergamot in another.

I’d love to hear what blends are your favorites.