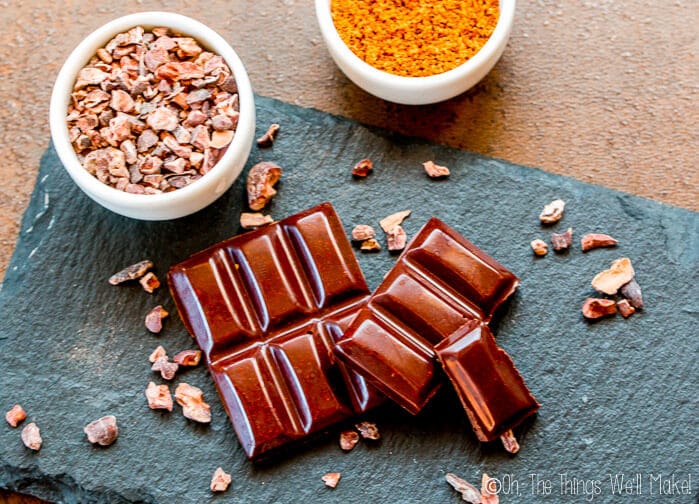 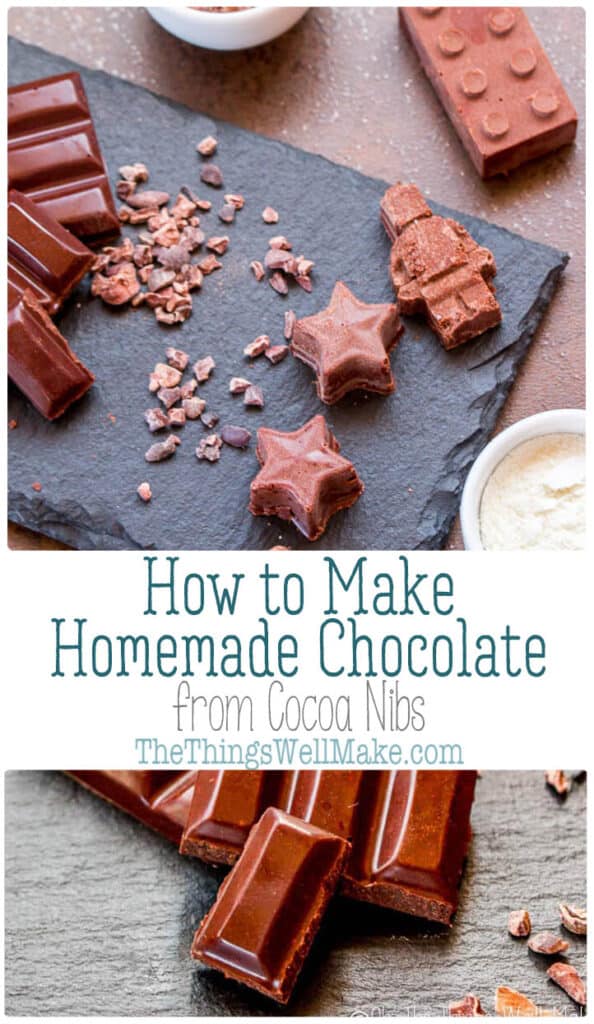 Avoid emulsifiers and other unwanted ingredients and control the process by making your own homemade chocolate bars from cocoa nibs.

This post comes as a result of experimentation after having bought some cocoa nibs. It was mostly out of curiosity to try to figure out how to make chocolate from scratch. I had read a bit about the whole chocolate making process before, but I hadn’t really experimented with using cocoa nibs for anything.

First, let’s tackle the whole “cocoa” vs. “cacao” issue. This is only an issue in English as in Spanish all cacao is called cacao because, well, “cacao” is really just “cocoa” in Spanish. When I was a kid, all cocoa powder and cocoa nibs were called just that, “cocoa” powder and nibs. That was also at a time when I remember my mom having carob chips at home as the healthy alternative to chocolate chips.

Since then, though, a lot has changed. Chocolate, or at least cocoa (or, if you prefer, cacao), has been found to have health benefits. Not all chocolates are equal, though, especially considering that milk chocolate has a lot of added sugar (and milk, of course). The same goes for hot “cocoa,” which is usually made from a highly processed drink powder filled with lots of sugars, emulsifiers, thickeners, and, well, cocoa powder.

The need to distinguish the “good” powder from the “bad” sweetened cocoa powders that have other additives is probably what spawned the use of different terminology in the first place. “Cacao” is now usually used to specify that the powder (and nibs, and butter) have been extracted without an excess amount of heat. It is marketed as a raw “superfood.” It is often said that cacao powder, then, is much healthier than cocoa powder because the heat doesn’t kill off all of its beneficial properties.

What does “raw cacao” even mean?

The problem is that the terminology is controversial. Those who make chocolate will argue that even the natural fermentation process used to process the cocoa beans will result in them reaching temperatures that are higher than those normally stated as the temperatures “raw” foods can’t reach. (“Raw” is sort of like “natural” in that it’s a term that isn’t really regulated, so you’re not really sure what it means most of the time.) You can read more about the fermenting process here.

While it is possible to process them without reaching high temperatures, most people say it’s not really a good idea because most cocoa beans aren’t processed in optimal hygiene conditions in the countries where most chocolate it processed.

The truth about cacao is that it’s almost impossible to know if you’re really getting a superior product when you buy cacao vs. cocoa powder as the terminology isn’t really regulated either. I’m not saying don’t buy cacao powder, but do want to make you aware of the situation so that you can make an informed decision and buy whatever cocoa or cacao you prefer.

How to make cocoa powder (or cacao powder)

As much as I’d love to share with you a tutorial for how to make cocoa powder, it isn’t something that I think we can easily accomplish at home, at least not if we want to approximate what we normally buy in the store. Common sense would have you believe that grinding up cocoa nibs would leave you with cocoa powder. I guess, in a way, that’s true, sort of. You can make a sort of cocoa powder by grinding up cocoa beans, but that’s not what we normally are buying in the store.

Here in Spain, the ingredient listed on unsweetened cocoa powder is “cacao desgrasado,” meaning cocoa with the fat removed. I was always curious about why they would want to remove the fat from the cocoa powder, but then, when trying to grind it too fine, I realized why.

Cocoa powder is made by grinding up the cocoa nibs, but that first result is basically melted chocolate. The light colored cocoa butter is then removed, which is great for using in lotions and balms, and the leftover dark colored material left behind can be finely ground into what we know as cocoa powder.

In the US, most cocoa powder is the “natural” kind. It is made, as I stated above, in the section about how to make cocoa powder. Here in Spain, though, the cocoa powder that is most typically sold in the store tends to be a much darker, flavorful cocoa powder. When I first wanted to make the switch from the supermarket brand cocoa powder to the stuff in the health food stores, I couldn’t figure out why all of the health food brands seemed so much lighter and less flavorful. I kept trying brand after brand until I finally figured out what was going on.

The supermarket brand cocoa powder had been alkalinized in what is called “Dutch processing.” The idea is that the pH of the cacao, which is normally on the acidic side, is alkalinized with potassium carbonate bringing it to a more neutral or even an alkaline pH. This gives the powder a darker hue and makes the flavor smoother and more reminiscent of black, dark chocolate. Being the type of person who loves dark chocolate and sticks her nose in the air up at milk chocolate, I have to admit that I prefer the color and flavor of Dutch processed cocoa.

The difference isn’t just in the appearance and flavor, though. Because the pH is different, it can react differently in recipes. If a recipe uses baking soda as the rising agent, it was probably meant to work with the acidity of “normal” cocoa powder. Just as vinegar and baking soda combine to give a bubbly chemical reaction that releases carbon dioxide, some recipes rely on the same sort of reaction where the gas released helps keep the cake from being too dense. Recipes meant for Dutch processed cocoa are more likely to call for baking powder, whose pH is more neutral. (Switching one for the other in recipes that don’t need a leavening agent is fine.)

I’ve already hinted at the process of making chocolate from scratch with cocoa (or cacao) nibs. It’s actually quite simple, and you really only need to blend the nibs until you end up with what is basically melted chocolate. The nibs include the fat of the cocoa beans, the cocoa butter, and the chocolate flavor and color you’re accustomed to seeing in cocoa powder and whatever is made with it.

As you process your cocoas nibs, they will release more of the fat, and the heat of the blending process liquifies the cocoa butter into an oil so you end up with a liquid. If you’ve ever made homemade coconut butter (or even almond butter or peanut butter), you’ll find that the process is very similar. How long it takes will depend on your food processor.

I love making my own chocolate from scratch using whatever cocoa nibs and whatever type of sugar I choose, but I would like to warn you that homemade chocolate made with a food processor will have a grainy texture. For somebody who eats chocolate by biting into it and chewing it, it isn’t too much of an issue. For those, like me, who like to have chocolate melt in your mouth slowly and to experience the smoothness of a well-milled chocolate, then food processor chocolate might not leave you 100% satisfied.

To make chocolate that is completely smooth, the cocoa nibs are normally ground for many hours using a wet grinder that is also known as a melanger or chocolate refiner. I haven’t had the pleasure of using one (yet!), but love the idea of using one for making perfectly smooth chocolate. It would also be great for grinding up some smooth coconut butter and almond butter!

Calculating the chocolate percentage (And should you add cocoa butter?)

Well, you could add 150g of sugar, or you can divide up those 150g and use several other ingredients.

Many people add cocoa butter. While it isn’t necessary (cocoa butter is already present in the cocoa nibs), it can make the process move along more quickly. This is especially helpful if your food processor isn’t especially potent. It may also help you get a slightly smoother chocolate. Normally one would add about 1/5th of the 30% in weight of cocoa butter.

I will say that his chocolate ended up a lot less smooth looking (as you can see in the photo above). It may be because of the addition of a lot of powdered milk, but it may also have something to do with the chocolate not being tempered. Be as it may, my son enjoyed the chocolate and was quite proud of having made it.

Should you temper homemade chocolate?

Tempering chocolate is a process done to get the fats in the cocoa butter to align correctly. Tempered chocolate is shiny in texture and snaps when broken into pieces. It’s prettier and has a nicer texture. Chocolate that hasn’t been tempered will be duller in appearance and can bloom quickly.

I didn’t bother trying to temper either of the chocolates, mainly because they were already going to be slightly grainy anyway. For me, this was more of a fun experiment. If I had a melanger (chocolate refiner) and were working to make a more professional grade chocolate, I would be more concerned with trying to temper the chocolate. I think I ended up being lucky with my homemade dark chocolate as it seemed to have fallen into temper on its own. You can help improve your luck by checking the temperature when you are about to pour the chocolate into the molds. If it’s around 31-32ºC (88-90ºF) it may fall into temper on its own.

How to temper homemade chocolate

I didn’t bother roasting the chocolate nibs before grinding them because I wanted to see what a “raw” homemade chocolate would taste like, but many people prefer roasting the nibs before grinding them into chocolate. To roast them, spread them out over a baking pan and bake them at around 150ºC (300ºF). You’ll want to check on them after around 10 minutes, and then after that keep a close eye on them to ensure they don’t burn. The roasting process should take 10-15 minutes, until the chocolate gives off a pleasant, baked chocolate aroma. 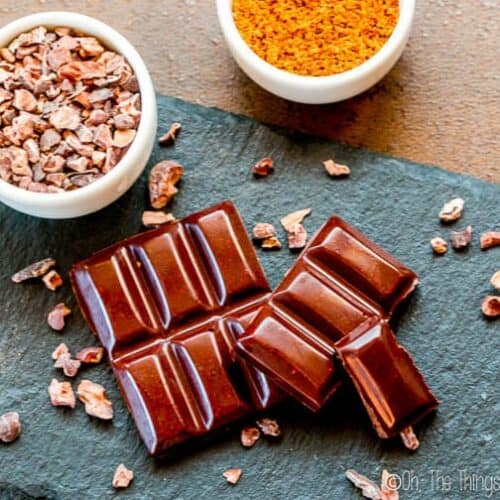 Make your own chocolate from cocoa nibs, without added emulsifiers or other additives. This recipe makes 500g, the equivalent of 5 bars of chocolate. Scale the recipe up or down as needed!
Nutritional information based on a 12.5g serving.
4.62 from 21 votes
Print Rate
Prep Time: 5 minutes
Total Time: 25 minutes
Servings: 40 servings
Calories: 68kcal
Author: Tracy Ariza, DDS