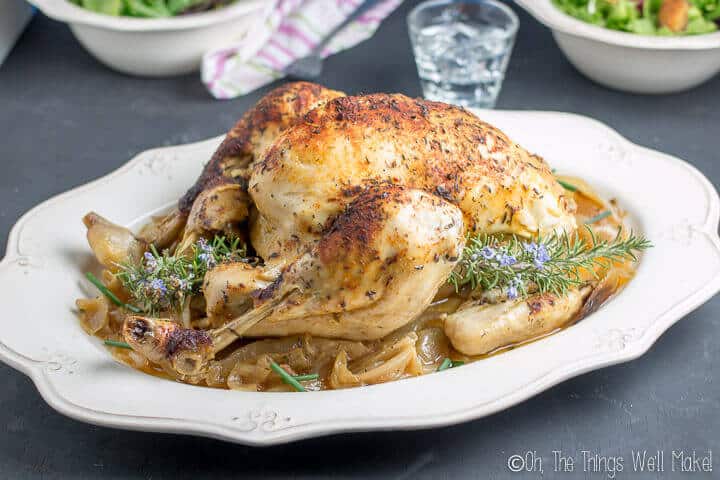 So many people rush to the grocery store on a weekly basis to buy a rotisserie chicken because it’s an easy, inexpensive meal.

I get it!
Despite my passion for trying to make just about anything myself, I also like to have things be simple and easy. That’s especially true on busy days when I get home and don’t feel like making dinner.

The problem with store bought rotisserie chickens is that you don’t know about the quality of the meat. From the inexpensive prices, you can make an educated guess, though. Am I right?

Even worse is the fact that you don’t know how they’ve been pre-seasoned. I’m not gonna lie, the store bought roasted chickens are tasty, and that’s likely because many times they’ve been brined in a solution with MSG and other flavor enhancers.

In comes the easy, slow cooker whole chicken to save the day (or night)!

Why make a whole chicken in the slow cooker?

I mean, you could go out and buy a rotisserie yourself and make it that way at home, but that would mean you’d have to spend money on just one more kitchen gadget that would take up a lot of space.

I’ve found that you can make a very tasty whole chicken in the slow cooker over a matter of around 5 hours.

For me, it’s a time saver, and it’s super convenient for me to make a slow cooker whole chicken on those days that I’m rushing my son around to his extracurricular activities in the evening.

Here in Spain we eat dinner around 8PM during the week. He gets out of school at 4:30, and I often spend the time between then and dinner bringing him to birthday parties or sports activities. By the time I get home, I’m too tired to want to cook.

Instead, right before I drop off my son at school for his afternoon classes at 3PM, I toss the whole chicken in the slow cooker. After that, it doesn’t matter if we decide to go to the park after school, if I have to take him to karate that day, or whatever other plans we have. At around 8PM, my dinner is already ready and waiting for me!

How to get a tasty, tender whole chicken with crispy skin

If you cook the chicken in your slow cooker on the low heat setting, you’ll end up with very tender meat that falls off the bone, but it ends up being almost too tender. I’d almost say that it ends up being mushy.

That’s why I prefer to cook it in around 5 hours on the high setting.

If we’re looking for a chicken with a crispy skin, though, all it takes is a few minutes under the broiler of the oven. (Just make sure to keep a watch on it so you don’t burn the skin!)

The resulting chicken is just about perfect: the meat is tender and falls of the bones, but the skin is nice and crispy.

I’ve always used onions when cooking the chicken in a slow cooker because that’s always the way I’ve made it over the stove. The onions give a great flavor to the chicken, and they also help slightly thicken the sauce released by the chicken.

I like to keep the recipe super simple, but it’s very easy to customize it to suit your taste. You can add other vegetables like carrots or celery, and can also add garlic and other herb combinations. Other people like to add lemon wedges to the chicken, to give it an acidic flavor, but I think the peel gives the chicken a slightly bitter flavor, so I normally don’t add it.

How to Make Homemade Croutons From Bread (Easy Enough for a Kid!)
Next Post: DIY Shaving Soap Recipe (& How to Use Shave Soap)