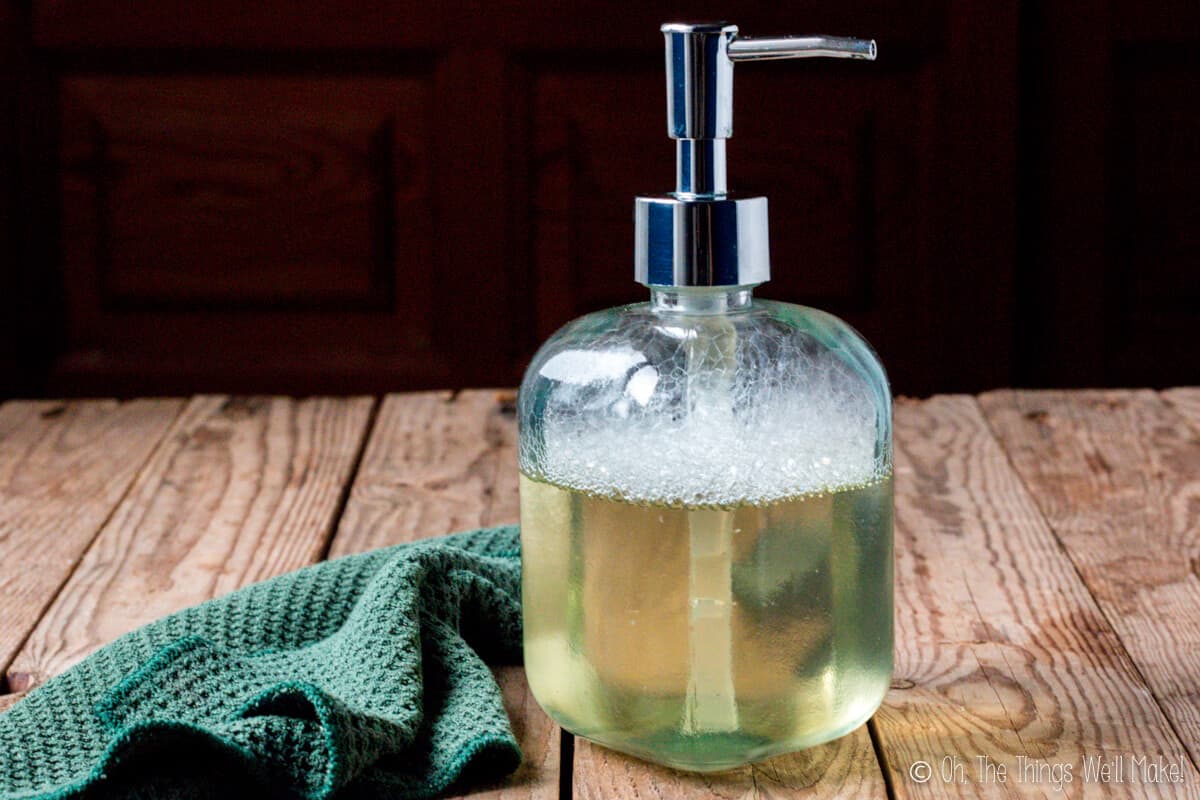 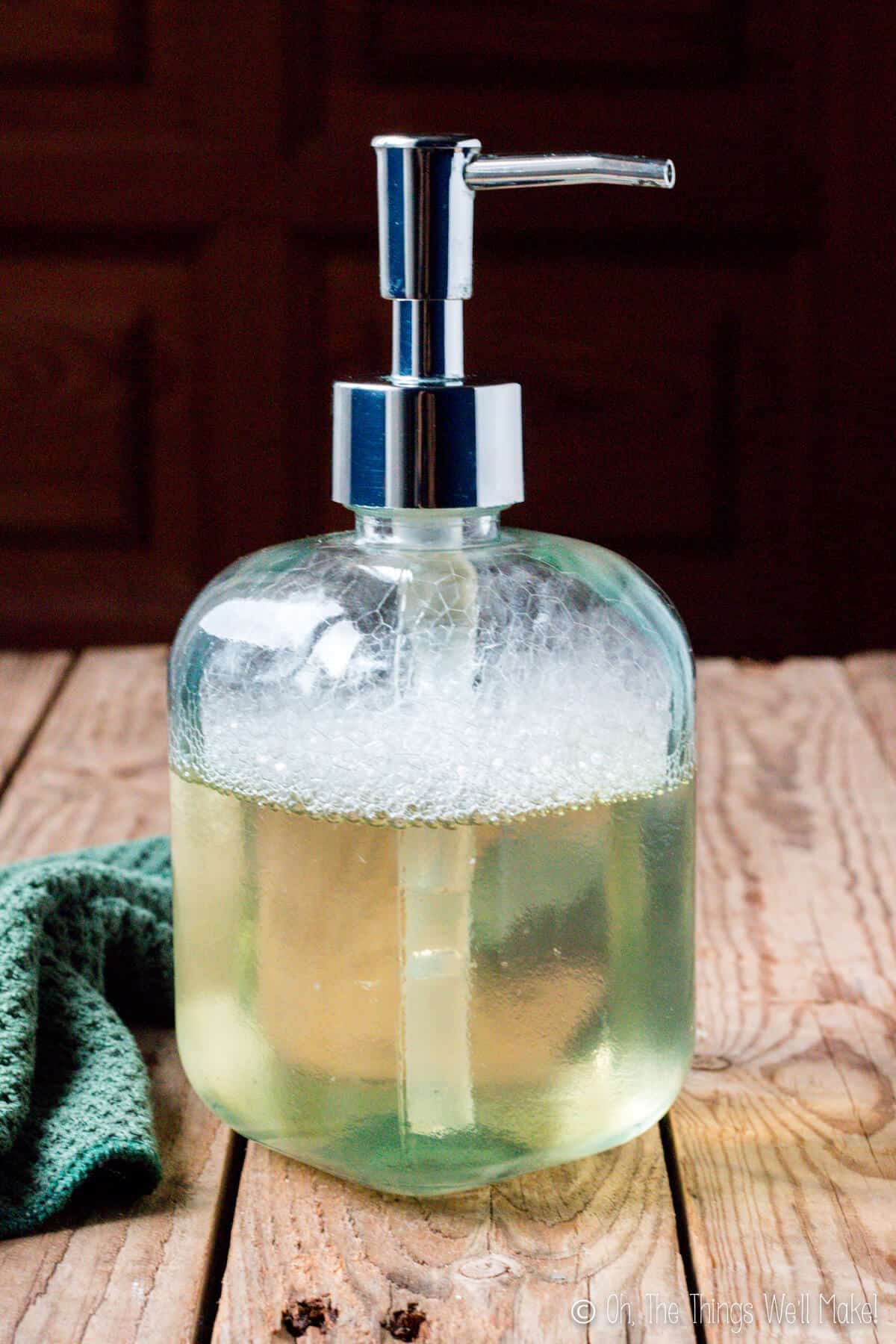 I should have posted this recipe quite a long time ago. I kept putting it off because I was working on other projects that I wanted to get out before summer was over, or before Halloween, or before…

Well, you know what I mean.

Choosing the oils for your soap

As I explained in my first recipe, rather than make a liquid soap using both olive oil and coconut oil together in the same soap, as I would with a bar soap, I decided to make a pure liquid castile soap with only olive oil and a separate liquid coconut oil soap instead.

While it may sound more complicated to make two separate soaps, I did have my reasons. Each oil brings different properties to the final soap. In a bar soap, you have to mix the oils and have the combination figured out before you make your soap. With a liquid soap, though, you have the advantage of being able to combine your finished soaps after the fact!

Because liquid soaps can be handy for so many different uses, whether it be for face and body, or for general cleansing around the house, I thought it would be great to have two separate soaps that I could combine as needed for each particular use.

Soaps made with coconut oil are cleansing and they provide a nice bubbly lather. On the other hand, they can be drying on the skin when used alone.

That’s why olive oil based soaps are so good for your face and body, and why I also added a bit of coconut oil to my easy beginner soap recipe. I wanted a conditioning soap that provided some lather. If you haven’t tried making soap yet, I will say that bar soaps are easier to make, and you may want to begin with that recipe to get your confidence up before moving on to liquid soaps.

My easy beginner soap recipe also uses only olive oil and coconut oil because I figured a soap with too many different type of strange oils would be intimidating for many newbie soap makers. In the end, though, while I like to try making soaps with different types of oils, I have to admit that I fall back on these classic oils as the main base of most of my soaps because they are relatively inexpensive, easy to find, and I love how they turn out in soap.

Ideally, I should have written this recipe out in the summer because during the summer, it’s easy to keep this soap clear and transparent. During the winter, though, just as coconut oil turns solid and opaque, so does the liquid soap made with coconut oil, to a certain extent.

My liquid coconut oil soap hasn’t turned solid, but it has become an opaque white and it is much thicker than it was when the weather was warmer. If you aren’t concerned with having a perfectly clear soap, then it isn’t a problem. The soap works just as well in the winter as it does in the summer, but you will probably find yourself diluting the soap more in the winter than you would in the summer.

All of that said, the photo at the very top of the page was just taken this week. It is pure liquid coconut oil soap that was made by taking some of the soap from the jar shown here and diluting it with distilled water. It took a couple of hours to settle, but I was able to take the photos in the afternoon, after mixing it up that morning. I haven’t kept diluted coconut oil liquid soap throughout the winter yet, so I’m not sure if it will stay clear as it gets even colder in our house, but for now dilution has worked to keep it clear.

Making a liquid castile soap with olive oil vs. a coconut oil based liquid soap

Basically, the process for both soaps is completely the same. You will notice that the instructions don’t vary much between making a liquid soap with olive oil and making this soap. 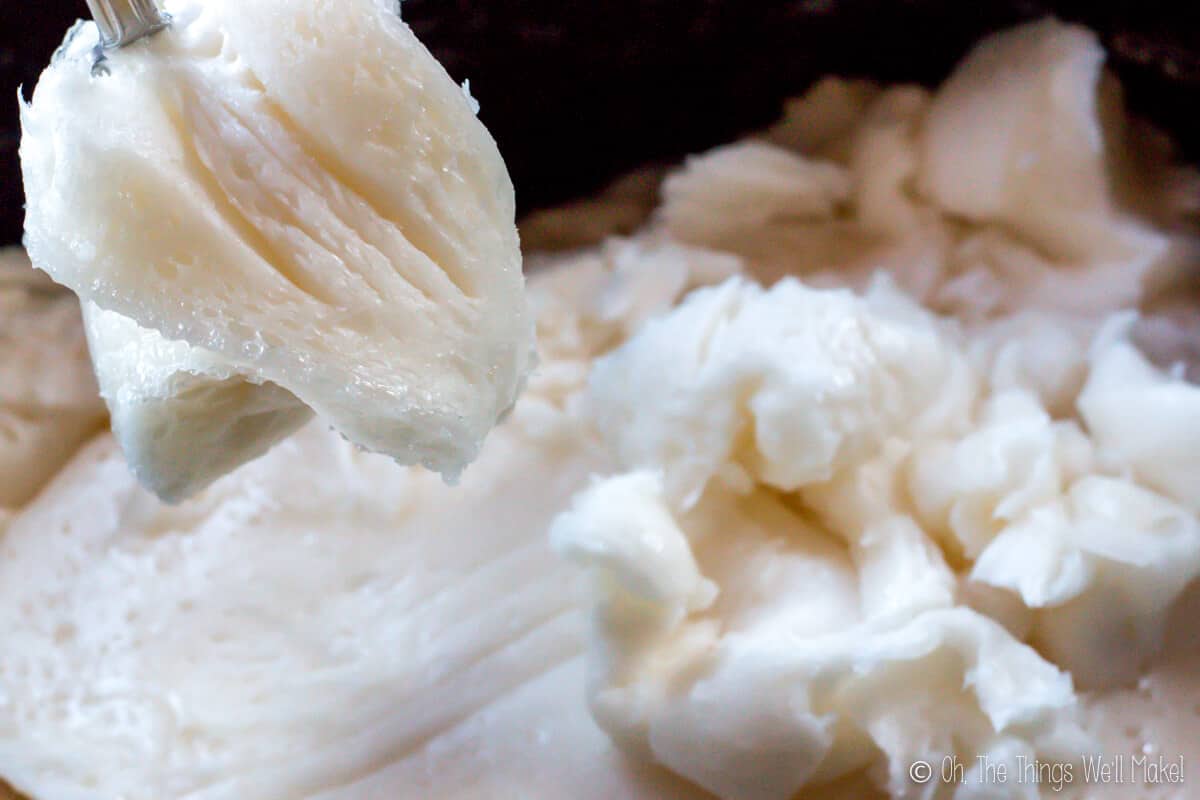 I was almost immediately forced to switch from the immersion blender to a wooden spatula, and later it got so solid and hard to work with, that I switched to a stainless steel fork.

Don’t let the thought of working with a big solid mass of soap paste scare you off, though. Most of this process is hands off and is really just cooking time. You only have to stir the mixture up as best as you can every half hour or so, and then let it do it’s thing.

Before we get started, I want to call attention to something very important, liquid soaps use KOH, potassium hydroxide, rather than the NaOH, sodium hydroxide, the lye that is used in bar soaps like my easy, beginner bar soap recipe! You can’t use them interchangeably. 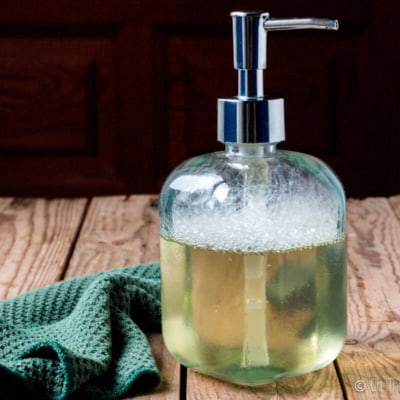 Diluting and balancing the pH of your liquid soap

I started to write out a lot of information about diluting your soap paste, but I realized that I was going to also have to update the recipe for the liquid castile soap with the same information. Reading over that post, I realized that there was a lot that I wanted to say that I never wrote out. Rather than write out duplicate content on both posts, I decided that it would be best to publish a new post talking about how to dilute your liquid soap paste, and how you can balance the pH (and why that is an issue with liquid soaps). Don’t worry, I’ve already started working on it, and it should be out in the next few days.

Read more about balancing the pH of liquid soaps here.

Happy soapmaking until then!