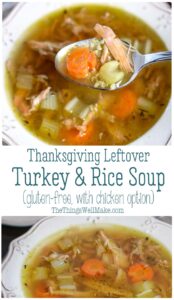 Don’t throw away the skin, bones and leftover turkey pieces, make this turkey rice soup, the best Thanksgiving leftover soup idea! You can also do this any time of year with leftover chicken!

What can you do with Thanksgiving leftovers?

So, you’ve gotten over the intimidation of roasting the perfect turkey, and now you have a bunch of leftover turkey!

Heating up the leftovers and eating the same meal over and over again for the next 3 days just isn’t going to cut it.

What if I told you, though, that you can transform the leftover skin and bones from your turkey, along with other veggie scraps and leftovers, into one of the best soups imaginable!

I get sick of leftover turkey, but once I found how wonderful leftover turkey soup can be, I look forward to having Thanksgiving leftovers each year.

How to make turkey stock from a turkey carcass

While most people think of making poultry stock from raw bones and veggies, you can also use the bones from already roasted turkeys and chickens to make a tasty soup.

Rather than throw away the carcass, skin, and bones from your turkey, you’d can transform them into my favorite Thanksgiving leftover soup, turkey rice soup.

Any time that you roast a turkey or chicken, instead of throwing away the skin, bones and other uneaten bits, they can be converted into a delicious and nourishing soup.

Let’s start with the stock base for your soup.

After you serve your turkey or chicken, save the skin and bones and uneaten parts. Separate and set aside any leftover meat, and throw the rest into a slow cooker with some water.

How long should you cook the turkey stock?

While you can get a lot of flavor from the bones, enough to make a decent soup, after simmering it for a couple of hours, I prefer to use a slow cooker instead. (If you’re short on time, an Instant Pot or electric pressure cooker would also be a great option!)

On Thanksgiving day, I’m not normally in the mood to do a lot of work after such a big meal, so I throw everything into the slow cooker with some water and leave it to do its thing all afternoon and overnight.

Not only do I find it easier that way, but the longer you cook it, the more nourishment you will extract from the bones. You can even use some of the stock, add more water, and keep simmering. It’s amazing how much stock you can obtain from a few bones!

For turkey, it takes much longer, but with chicken, the bones begin to disintegrate some time after 12 hours.

After around 24 hours, even the larger chicken bones start to completely fall apart.

When I make turkey stock from my turkey leftovers, I often save some of the larger bones in the freezer after obtaining my stock. The larger bones can be reused in your next batch of stock. Even the larger turkey bones eventually will disintegrate.

After the bones have disintegrated, and after I have strained out my stock, I save the broken-down skin and bones to feed to my dogs. They love it. You’ve probably heard that you shouldn’t feed cooked chicken bones to dogs and other pets. That’s because poultry bones can splinter and be dangerous for them. Once the bones begin to completely fall apart and no longer splinter, you can safely give the bone mush to your pets. 😉

Once you have obtained your stock, making the rest of the soup is simple.

I like to simmer the stock with some cut up vegetables like celery, onion, and carrots, and when the veggies start to get tender, I add in some rice. If you are using a brown rice that takes longer to cook, add it in at the beginning of cooking.

Near the end of the cooking time, shred the leftover meat and add it into the soup so that it warms before you serve it.

How to use other Thanksgiving leftovers

Sweet potatoes make a lovely addition to the soup, as does leftover stuffing. Not only does the stuffing help thicken the soup slightly, but it also adds a wonderful flavor to the soup that lets you relive your Thanksgiving feast. Just throw the leftovers into your soup at the end of the cooking time to warm them.

In the past, I never loved eating Thanksgiving leftovers, but ever since I started making this soup, I have to admit that I look forward to the day after Thanksgiving. 🙂

Nutritional information depends upon the amount of meat and other leftovers added to the soup. The given information assumes stock obtained from the bones along with rice and veggies. Added meat and other added ingredients will need to be figured in to obtain more accurate information.