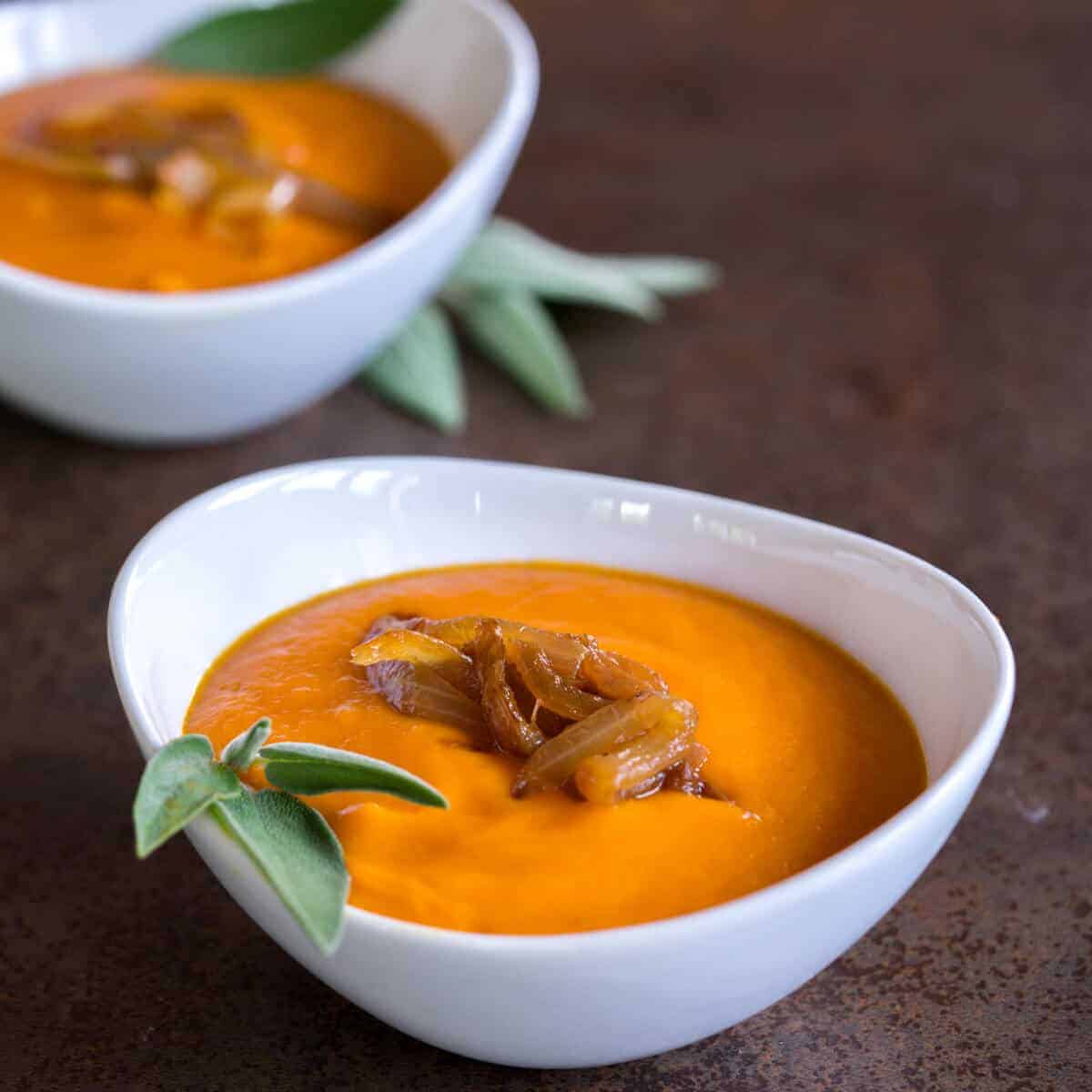 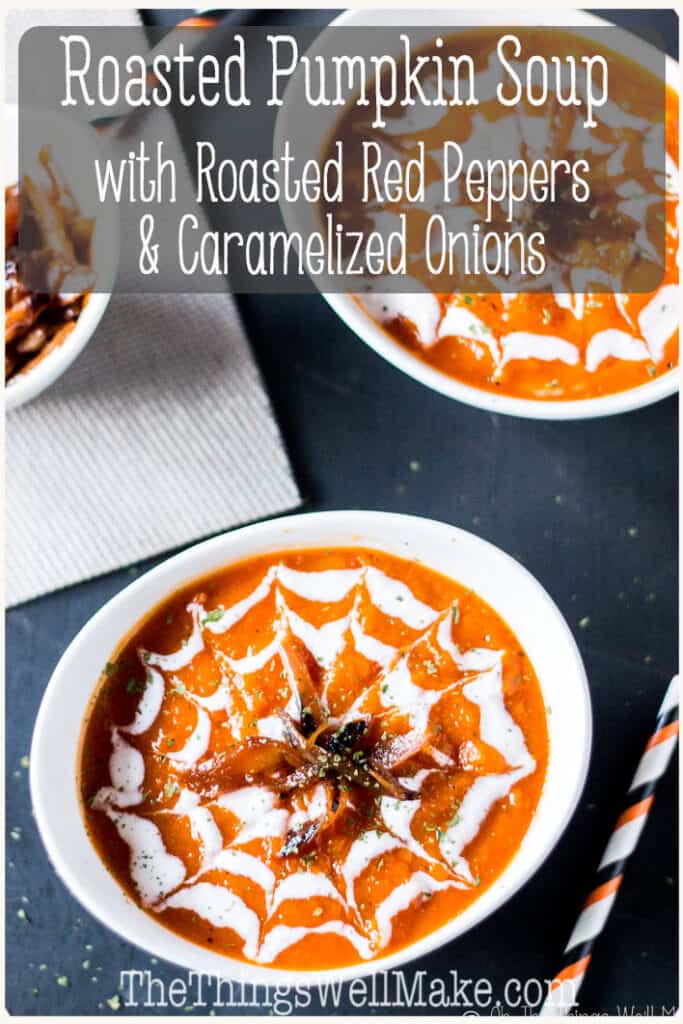 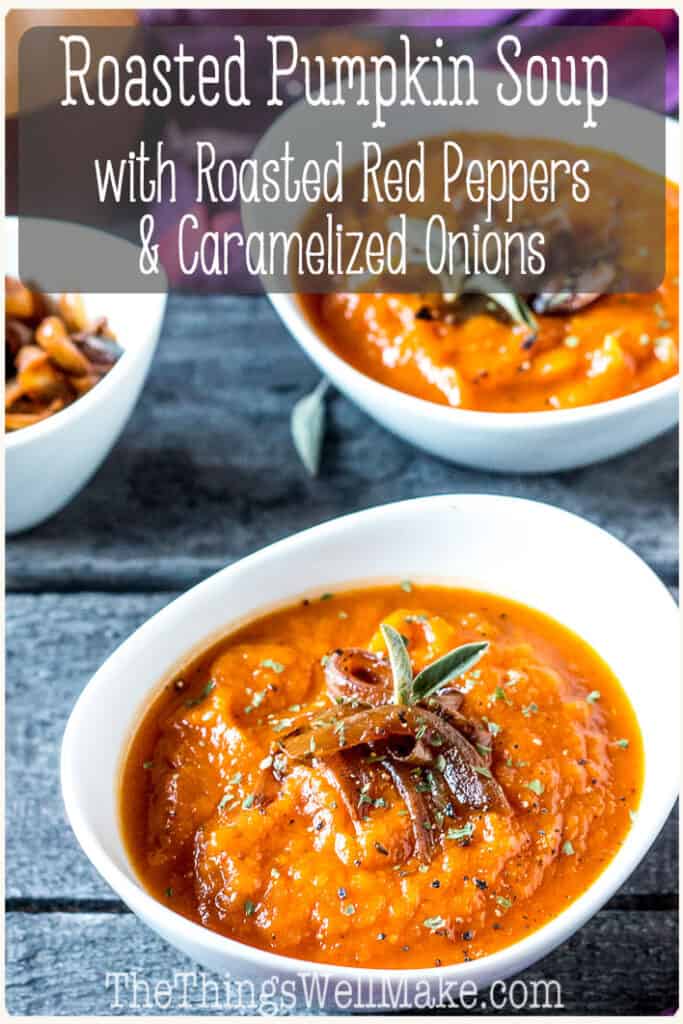 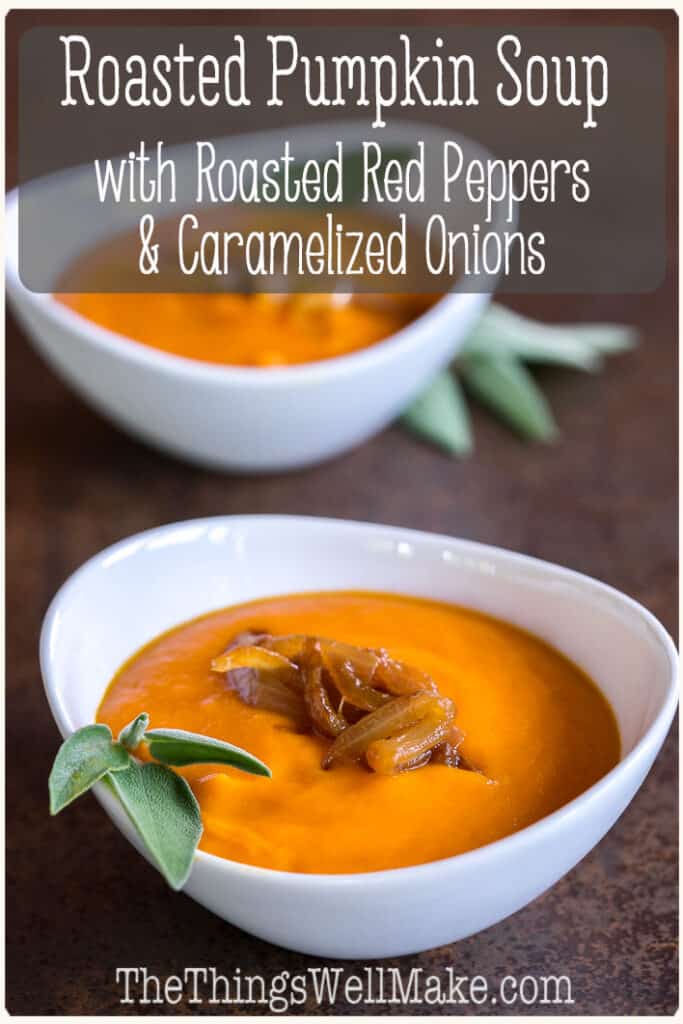 Roasted red peppers and caramelized onions meld together and provide the flavor punch to this savory roasted pumpkin soup recipe, perfect for warming up on a cool autumn day.

I have been perfecting this recipe for several years now.

When I first started my blog, I already wanted to post a savory roasted pumpkin soup recipe, but I never got around to it because I wasn’t fully satisfied with the resulting soup. While everybody in the house ate it (even my husband who isn’t much of a soup fan), I still felt like it was missing something.

I later found that adding in other veggies like roasted red bell peppers and caramelized onions totally changed things. This sweet, creamy pumpkin soup has become one of my husband’s favorites.

How to Make a Roasted Pumpkin Soup

First, you’ll want to make a pumpkin purée by slicing a pumpkin (or butternut squash) in half, scooping out the seeds, and baking it in the oven (350ºF/180ºC) until soft. You can also peel the pumpkin and boil it in water until soft instead.

While you could use canned pumpkin, I’d suggest you give making your own a try.

Here in Spain, I don’t have the option to buy canned pumpkin, so I got in the habit of roasting my own in the oven. I’m so happy I was somewhat forced into making my own as it is so easy to do and tastes so much better than what you would buy already made. It’s probably one of the first realizations that started me on my way to making more and more of my food from scratch.

Looking for a tasty pumpkin puree to use in recipes? Store-bought brands may contain sugars and ingredients you can’t pronounce. Here’s how to easily make your own!
Check out this recipe 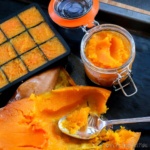 Next, you’ll want to start roasting your red peppers.

While you could just throw in some peppers and boil them with the pumpkin purée, you’d be missing out on the depth of flavor that results from roasting your vegetables.

Roasting both the pumpkins (or butternut squash) and the red peppers brings out their sweetness and also deepens their natural flavors. They incorporate a new level of complexity to the soup that combines perfectly with the other flavors.

A delicious healthy topping or garnish, roasted red peppers are easy to make and super versatile.Yield: Approximately 2 Cups
Check out this recipe 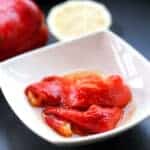 While your red peppers are roasting, you can begin to caramelize the onions.

Just as roasting the peppers and pumpkins intensifies their flavor and brings out their sweetness, caramelizing the onions results in a new flavor profile, unlike many others.

When you slowly caramelize the onions, they darken and get sweeter due to what is known as the Maillard reaction. The proteins and the sugars in the onions combine in a way that results in a whole new flavor.

It’s the same process that turned my homemade black garlic dark and gave it the distinctive sweet, yet tangy smoothness that sets it apart.

To caramelize the onions, you’ll first want to…

Putting it all together

Once you’ve roasted and caramelized all of your veggies, the rest is super quick and easy!

Cook the pumpkin purée over the stove. This will warm it and also help caramelize it to bring out its sweetness.

Next, add the roasted red peppers, water, and the caramelized onions. You’ll also want to add in some salt and freshly ground pepper, fresh sage, and a touch of cumin.

Heat the ingredients until warm, and then blend to a purée.

Getting a Creamy Consistency

In order to get the soup to have a smooth, creamy consistency, it’s all about blending with a high-speed blender. You can use either an immersion blender or a high power stand blender, but the latter tends to have more power and do a better job. The immersion blender trades some of that power for convenience.

The secret to getting things smooth, either way, is to blend for several minutes and add in as much water as needed to get the mixture circulating freely through the blades.

I used an immersion blender for the soup in the top photo, and while it was still delicious, it wasn’t as creamy and smooth as the same soup when made in my normal stand blender (seen below). I was keeping the soup especially thick that day because I wanted to decorate it for Halloween.

In the end, both versions were easy to decorate. (I’ll show you how below.)

Using a regular stand blender with very hot liquids can be dangerous. If steam builds up, the hot soup can “explode” out, making a mess and potentially burning you.

To prevent soup “explosions,” only fill the blender jar halfway. You can also open the center insert of the lid to allow steam to escape. If doing so, you should cover the lid with a towel to prevent the soup from flying out the hole.

My first attempts at making a roasted pumpkin soup all used a homemade chicken bone broth. After experimenting with the recipe, though, I realized that we liked the soup better when using water rather than broth. This soup can be made either way, though.

The roasted pumpkin soup tastes fresher and lighter when only the flavors of the vegetables shine through. Each adds their own clean sweetness, and the addition of an animal-based broth tones that down. If you find the soup too sweet, though, you could try incorporating any broth in place of the water.

To keep it fully vegan, you’ll also want to use a plant-based oil like coconut oil or olive oil for caramelizing the onions. You can also garnish the soup with a touch of coconut cream, if desired.

Watch how to make this roasted pumpkin soup 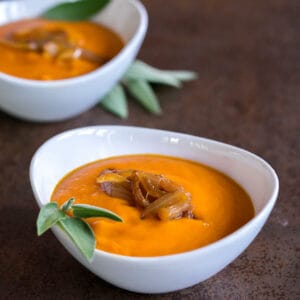 How to make a Halloween Spiderweb Soup

Seeing as Halloween is coming up, I decided to decorate our soup for the holiday with a quick and easy spiderweb design.

Seeing as nobody is perfect, I just assumed that you could drizzle heavy whipping cream on the soup, but I ended up with a blob of liquid rather than a delicate design! Yes, I also have my kitchen failures. ?

I tried again using some greek yogurt, and that worked out much better.

You can use either greek yogurt, sour cream, or any sort of thick white sauce. (A thick coconut cream may be a good option to keep the soup vegan.)

Add the cream to a piping bag or decorator bottles and pipe a spiral design or concentric circles with a dot in the center on top of the soup.

Once you’ve piped on the circles or spiral, take a toothpick and run it from the center dot through the other circles to the edge of the bowl. Repeat the process several times going completely around the bowl until you’ve completed your spiderweb design. 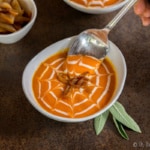 How to Make a Spiderweb Topping for Soups or Dips

This post was originally published on September 16, 2015. It was completely updated with new information, more pictures, and better tips and tricks in October 2019.