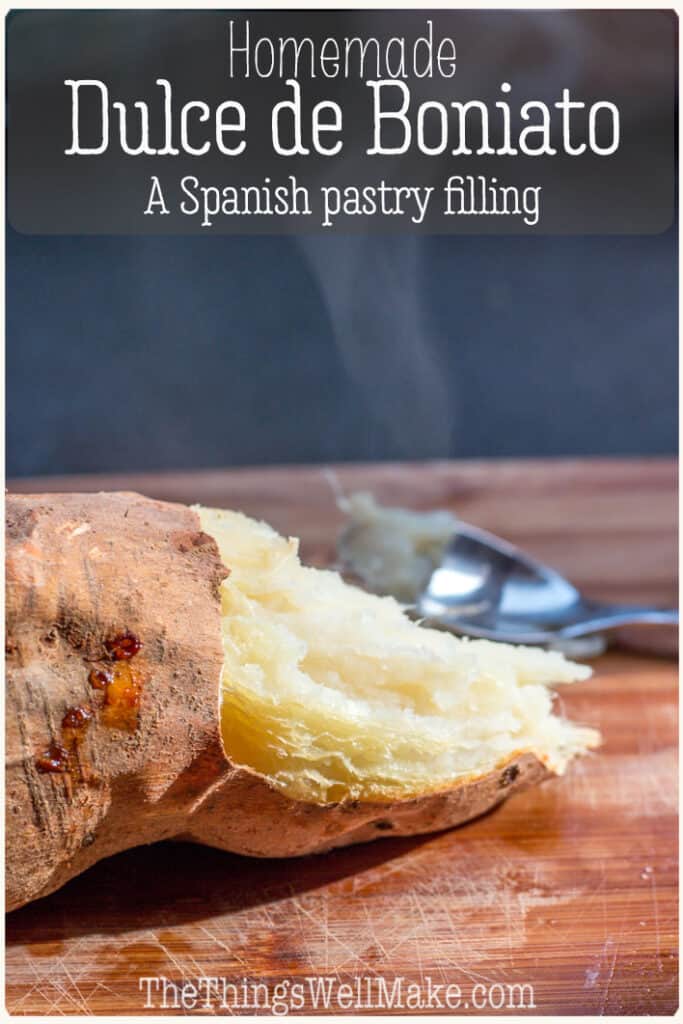 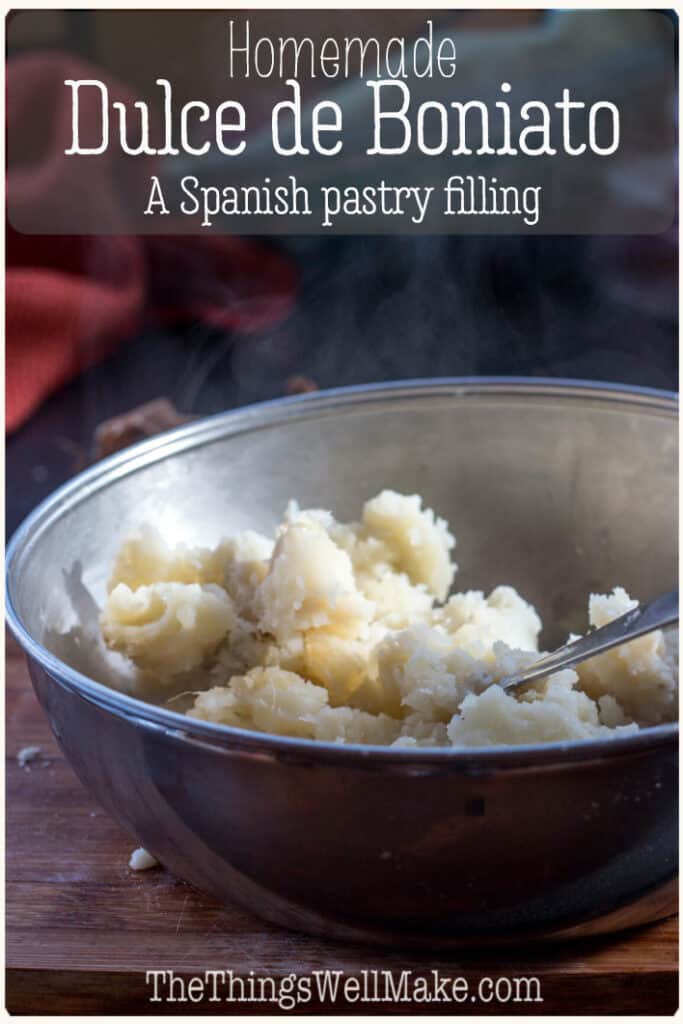 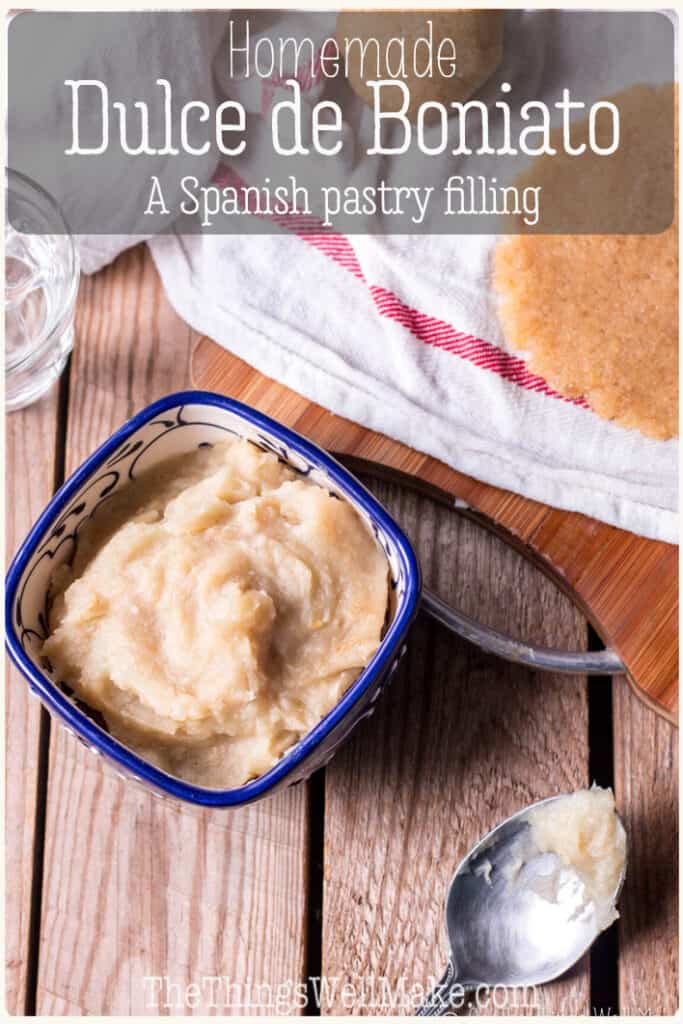 Dulce de boniato is a sweet Spanish pastry filling used mostly around Christmas for filling pastries like pastissets (pastelitos) or empanadillas dulces. While most people use the canned variety here, it is quite easy to make and tastes much better when you make it from scratch.

Every Christmas my mother in law gets together with friends to make pastissets, also known as pastelitos or sweet empanadillas. They’re are a popular Spanish Christmas filled pastry that is especially popular in the Valencian and Catalan speaking regions in Spain. “Pastissets” is the Valencian (and Catalan) name for these pastries that can be filled with all sorts of different pastry fillings.

While dulce de boniato, a filling made with white sweet potato, is probably the most common filling for these pastries here in my region of the Valencian Community, there are a variety of other popular fillings. Also commonly seen are those with almond filling or with “cabello de angel,” a sweet filling made from the Siam pumpkin.

The pastry itself can also be made with several different types of doughs. The most popular is wheat flour based, but there is also a popular almond based pastry that is naturally grain-free. I shared my adaptation of a friend’s grain-free almond pastry here on the blog. You can fill that pastry dough with this sweet boniato pastry filling.

Just as most people in the US turn to canned pumpkin when making their pumpkin pies, here in Spain most people used a canned boniato filling when making pastissets. It’s something that I don’t quite understand because making dulce de boniato is just as simple as making your own pumpkin puree.

I always try to make things from scratch whenever possible, but in this case, I think it’s especially important because canned boniato is overly sweet. Making your own ensures that you can control the ingredients and the amount of sweetness.

To make this boniato filling, we’ll need boniatos, of course. Apart from the boniato, this simple recipe really only uses honey to sweeten the mixture and some ground cinnamon and lemon zest for flavor.

Boniato is a type of sweet potato that is white on the inside rather than orange. Here it is commonly used for making this pastry filling, but it is also used in savory dishes like the Valencian puchero, a Spanish stew of different meats and vegetables the combination of which varies from region to region and house to house.

Interestingly enough, I used to think that I hated sweet potatoes because I had only seen them in overly sweet and strange concoctions for Thanksgiving. It wasn’t until I tried the white boniato in puchero and loved it, that I decided to also give “regular” sweet potatoes another chance. I’m so happy I did because everybody in the house loves sweet potato fries. I also love serving them baked with my homemade kefir sour cream and in sweet chicken adobo.

Making this filling couldn’t be much simpler. All you really need to do is to cook the boniato and then blend the cooked boniato with the other ingredients.

The finished filling should be rather thick, so, depending on how you cook the boniato, you may need to further cook the mixed ingredients on the stove to evaporate off some of the moisture and thicken the mixture.

When making your own dulce de boniato pastry filling, there are several ways that you can cook the boniato. You can either peel it and cut it into pieces and boil it, or you can bake the boniato and then make the puree from the baked boniato.

I prefer baking the boniatos because with that method, you aren’t adding more water to the mixture like you would when boiling it. Ideally, you want to make a fairly thick pastry. If you boil the boniatos, you will likely find yourself cooking the mixture over the stove for a while to evaporate off any excess moisture. When baking, I find that I often don’t need to cook the boniatos further at all.

Most dulce de boniato recipes use regular table sugar, and they use A LOT of it! The traditional way to make it is by weight. Most recipes added the sugar somewhere in the range between a 1:1 ratio to a 1:2 ratio of sugar to boniato. So, if you were to begin with 300 grams of boniato, you would add somewhere between 150-300 grams of sugar!

I wanted to use a lot less, but I was worried that the finished pastries would taste bland. So, I decided to use honey instead of sugar. The extra flavor added by the honey made the filling interesting enough to not need quite so much.

To add yet more complexity of flavor, I also added more lemon zest and cinnamon to fool the tastebuds. Not only did I not miss the extra sweetness, but I actually liked this version much better. Surprisingly enough, so did my husband who doesn’t usually like pastissets, or any almond cakes or pastries really. When he tried mine, he said they were actually good. 🙂

I think that the exaggerated sweetness of the original filling, apart from being unhealthy, is enough to turn many people off from the dessert.

As for the flavor additions, canned dulce de boniato usually has a hint of anise flavoring, something that I personally don’t mind, but that my husband hates. I chose to use lemon zest and cinnamon to add flavor to the pastry filling, which is common among homemade recipes, but you can choose to add in a touch of anise liqueur instead if you prefer.

Boniato filling can be kept for up to a week in the fridge. The more sugar you add, the longer it will keep. The mixture can also be canned or frozen for later use. 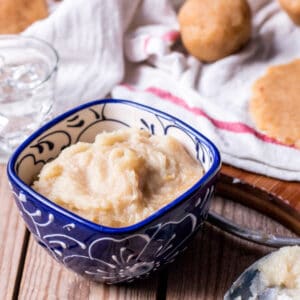 Dulce de boniato is a sweet Spanish pastry filling used mostly around Christmas for filling pastries like pastissets (pastelitos) or empanadillas dulces. While most people use the canned variety here, it is quite easy to make and tastes much better when you make it at home.
5 from 1 vote
Print Pin Rate
Prep Time: 15 minutes
Cook Time: 1 hour
Total Time: 1 hour 15 minutes
Servings: 6 large pastissets
Calories: 86kcal
Author: Tracy Ariza, DDS

This filling is delicious when used in pastissets, a sweet Spanish pastry that is usually served around Christmas. Check out my almond-based pastry dough recipe for pastissets here.

Rather than bake the boniatos, you can also peel them and add them to boiling water to cook them. This method adds more liquid to the boniatos, which you may need to cook off to thicken the mixture.

Anise liqueur can be used to flavor the filling instead of the cinnamon and lemon zest, if you prefer.

This post was originally published on December 5th, 2015. It was rewritten in December of 2020, adding new photos, video, and clearer instructions.