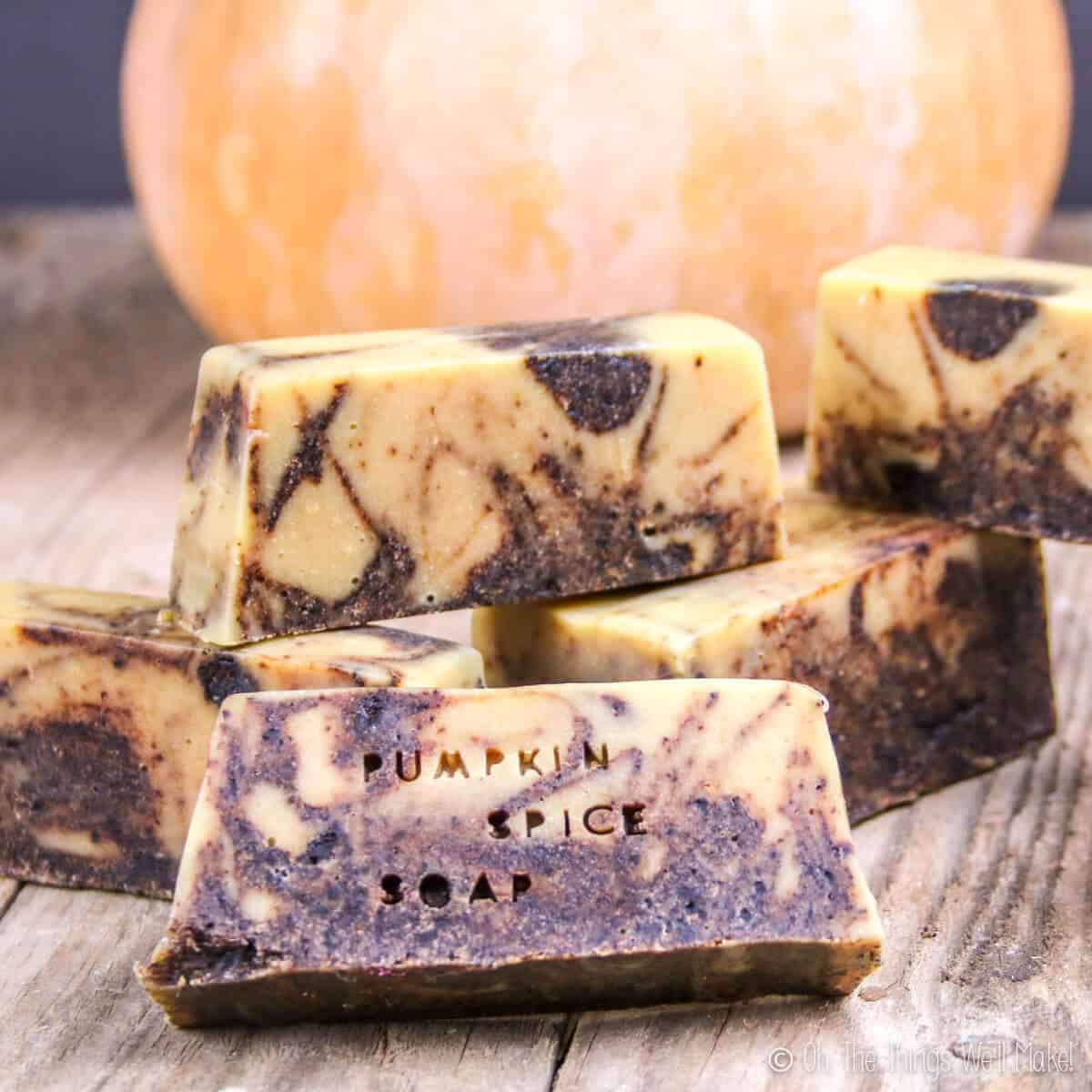 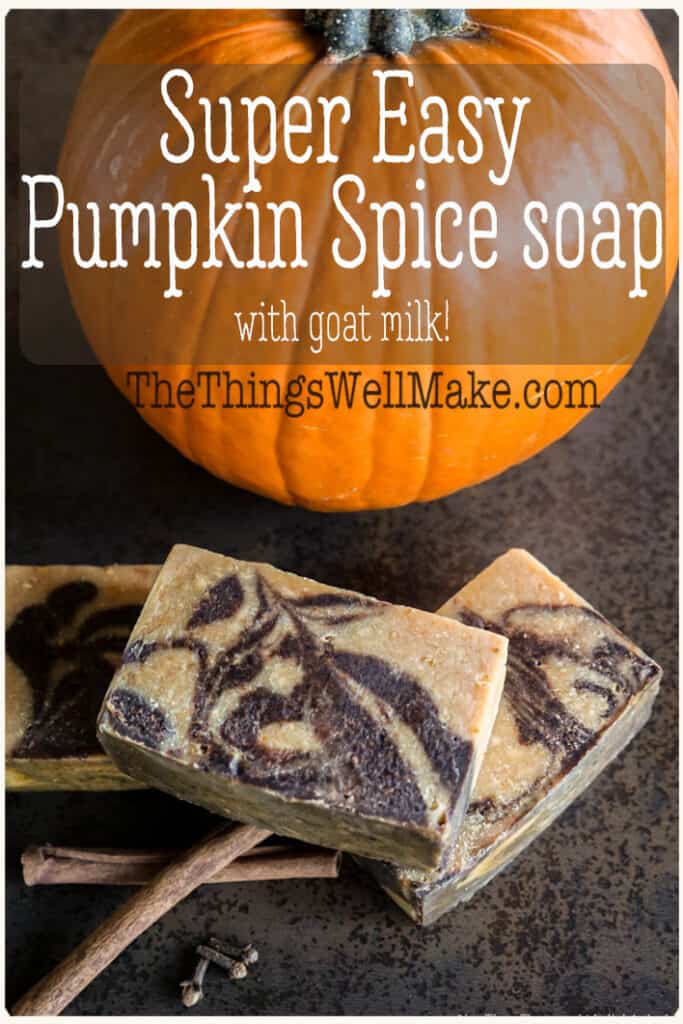 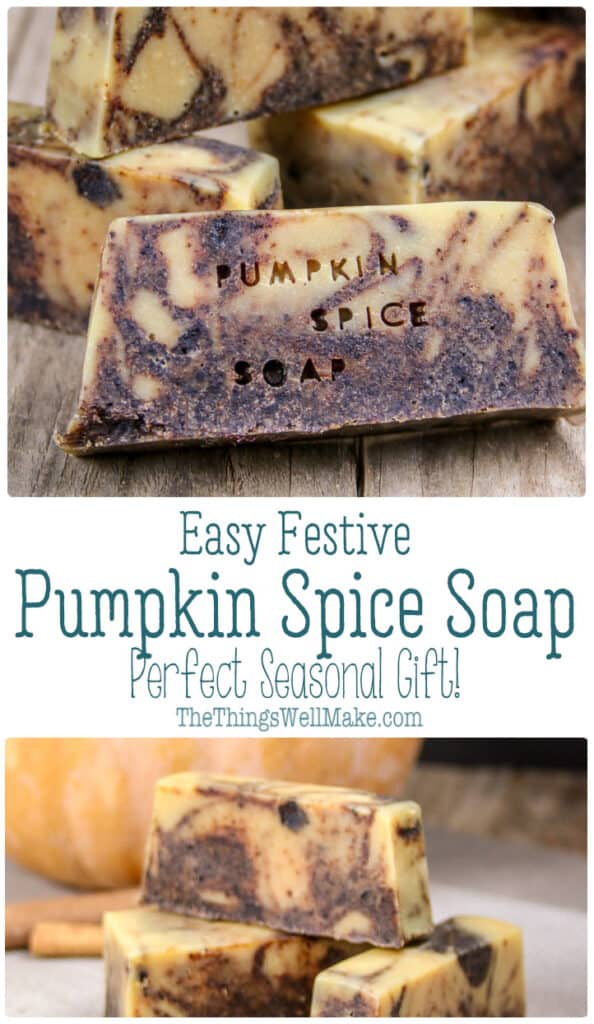 Pin this for later!

What I love about this soap is that the scent lasts quite a bit longer than most naturally scented soaps. Perhaps it’s because it uses a combination of both essential oils and the actual spices. Or, maybe it’s just because the fragrance of these spices is more persistent.

Either way, I’m really happy with the final outcome.

If you have never made soap before, don’t worry. This soap is very simple to make. I purposely based this soap recipe on my easy, beginner soap recipe.

Because this recipe uses milk and adds a swirling technique, it is a bit more complicated than the other recipe. If that worries you, begin with the other recipe. If you’re adventurous, though, give this one a try! By following the directions carefully, even as a beginner, you shouldn’t have any problems.

My beginner soap is a tried and true recipe that only uses simple, easy-to-find oils. It also has a relatively long working time. The longer working time is perfect for beginners because it gives plenty of time to add in fragrance oils and spices. You should also have time to spare to swirl them together as I did.

The beginner soap is great, but it’s also rather basic. I often get questions from readers who love that recipe, but who want to incorporate other ingredients. Today we will cover some of the ways to customize a recipe without changing the main recipe.

Rather than only use water, I decided to add some goat milk to this recipe. Goat’s milk is a very popular ingredient for soap because it is gentle and nourishing to the skin.

Making soap with goat’s milk isn’t just as simple as switching out the water for milk, though. Milk is a great ingredient because it has nourishing fats. Milk also has sugar in it, though, and the chemical reaction of those sugars with the lye can cause it to burn. That can leave your soap with an unpleasant scent and/or brown color.

To prevent that from happening, the milk should be added at a very cold temperature. This can be done by mixing it over an ice bath or even freezing the milk first.

I also made this soap different from the basic recipe by using a swirl technique to give a fun, marbled appearance to the soap.

This soap is completely natural, but still has a fun look to it. The main soap mixture has the goat milk and a homemade pumpkin puree. (While it’s simple to make, you can also just use canned pumpkin instead.) To make the swirl, we’ll separate out some of the soap mixture and add our ground, dried spices into only one of the parts. The spices add a dark color to the soap, along with a beautiful aroma, and also add a very mild exfoliation.

By swirling the spiced soap into the unspiced pumpkin soap, you end up with a pretty marbled looking soap. Some people make elaborate swirl designs with their soaps, incorporating a lot of bright colors. For today, though, we’ll start simple.

No matter what happens with your swirling, this soap should come out looking great. (I’m always a bit nervous about how it will turn out, but I’m also always pleasantly surprised by the outcome.)

Like the easy, beginner soap, the main base of this soap is made with olive oil, coconut oil, lye, and water.

To give this soap more of an autumn touch, I added some pumpkin puree. While you could use canned pumpkin, it’s very simple to make a homemade pumpkin puree that is perfect for all sorts of recipes this time of year!

For creaminess, and to help nourish the skin, I also added goat’s milk. Pumpkin and goat’s milk both add a little color to the soap, and they also add some hydration and richness.

To add some more color and a beautiful scent, I added some pumpkin spices. While I could have stuck with just using essential oils, I chose to also add the ground, dried spices themselves to part of the recipe. That allowed me to show you how to make a simple swirling pattern for a homemade soap.

Some of these spices, and their essential oils, might be irritating to sensitive skin. While I haven’t found it to be a problem in this soap, that doesn’t mean that it won’t cause issues for some people with sensitivities to those oils or with especially sensitive skin!

This soap may look complicated, but it’s really quite simple. First, mix the lye solution with frozen goat’s milk.

Then blend that mixed solution into the oils.

Once we reach “trace” (when the soap is fully emulsified and looks like a thin mayonnaise), we will add our pumpkin and fragrance oils.

Then, we’ll separate around ⅓ of the mixture into a separate bowl.

At this point, we’ll add the ground spices into the soap mixture that we just separated out.

To swirl the soaps, place a stainless steel spoon (or another utensil) into the soap.

Allow the soap to set untouched for around 24 hours. Once it’s hard enough to unmold it, gently remove it from the mold and cut it into bars.

That’s all there is to it. You should let the bars of soap cure for around 3-4 weeks before using them. (During that time, they will harden and improve.)

Even this recipe can be slightly customized to suit your taste.

I originally left this soap its natural golden color. This year, though, I wanted to try something new and incorporate a natural orange color by adding some ground achiote to the soap. Unfortunately, when I was ready to make it, I realized I didn’t have any on hand. So, I used paprika instead. Paprika is another way to naturally color the soap, but it doesn’t turn as orange as it would with achiote powder.

Don’t want to use goat milk? Just switch it for another 100ml of water.

If you don’t want to do the swirl technique, you can either add the spices to all of the soap (which will result in a brown soap) or don’t use ground spices at all (for a golden colored soap).

As with all soap recipes, be very careful when working with the lye solution. 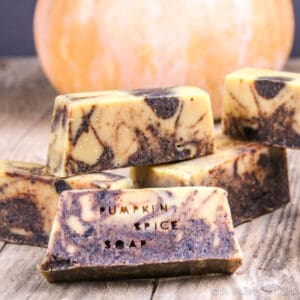 Combine the lye solution and the oils

Add in other ingredients

Unmold and cut the soap

*When first published, this recipe used 400g olive oil and 100g sweet almond oil. At the time, I had a lot of extra almond oil and was experimenting with it. I’ve found, though, that the extra expense isn’t worth it. I now use the beginner soap recipe as a base- exactly as it was written in the original post.

For more cleansing and lather, you can use 450g olive oil and 150g coconut oil for the oils, and increase the lye to 81g.  If you don’t want to use goat milk, you can use only water for the recipe.

This post was originally published on September 23, 2014. It was rewritten and republished in November of 2020 with new photos, information, and video.

Making an Easy, Basic Beginner Soap, and Then Making it Fun!!
Next Post: DIY Fun and Cute Face Masks