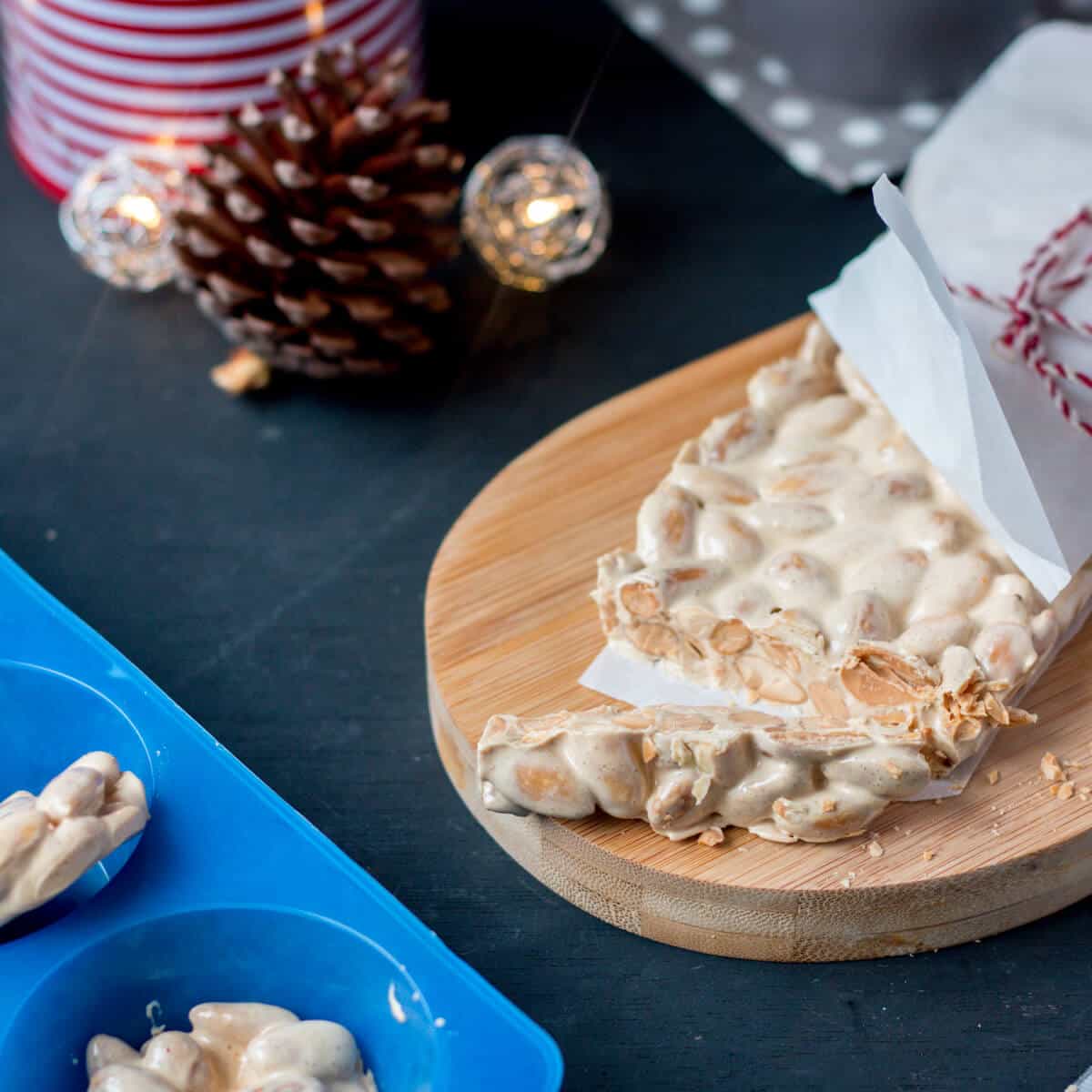 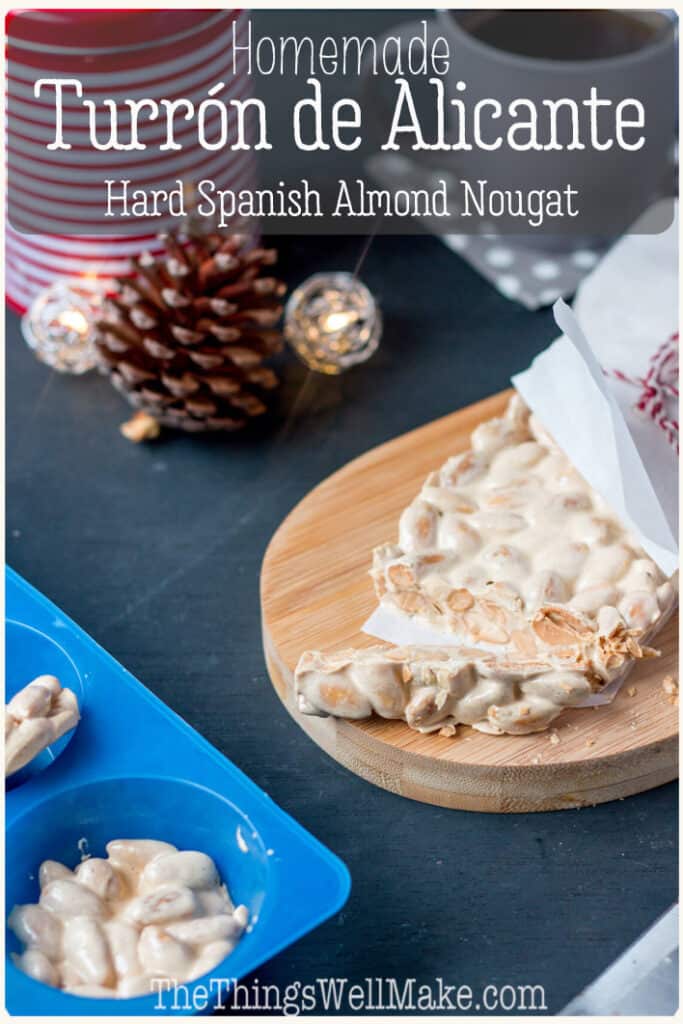 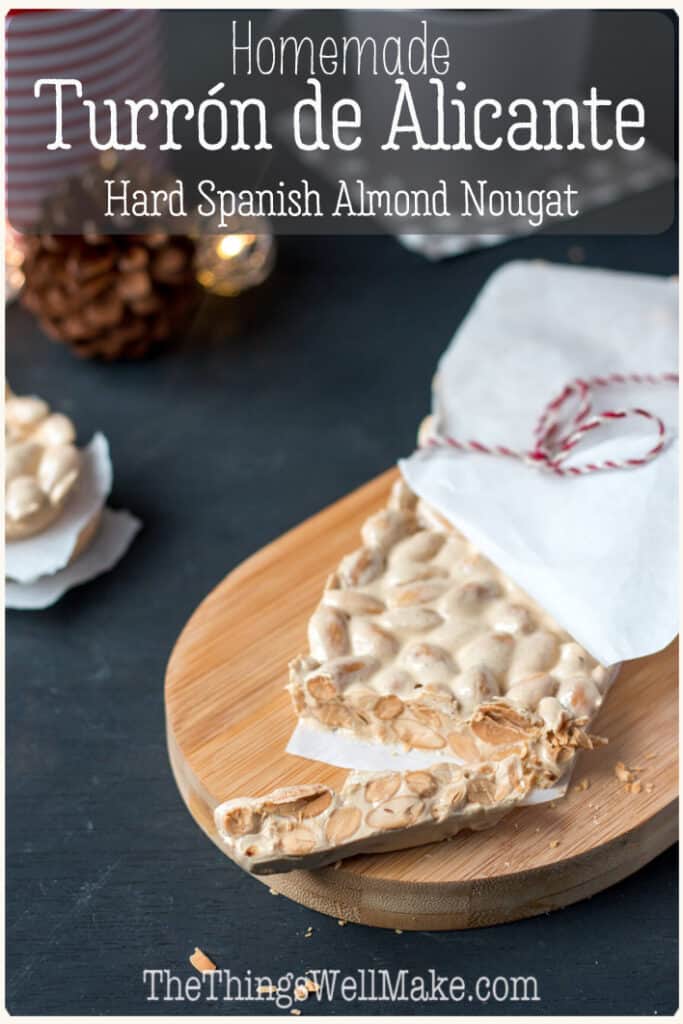 One of Spain’s most popular Christmas treats, turrón is an almond nougat made with almonds and honey. Today I’ll share my recipe for turrón de Alicante, the hard, white almond nougat.

This recipe has been in the long time making. Each year, I try out new recipes for turrón, and each year I am disappointed with the results. I have always ended up with a soft “hard” turrón (turrón de Alicante) and a hard “soft” turrón (turrón de Jijona).

You see, in Spain, the two most popular and characteristic turrones at Christmas time are the turrón de Alicante, the hard almond nougat, and the turrón de Jijona (another city in the province of Alicante), the soft almond nougat. Those were probably the original types of turrón, but truth be told, I’m not even certain what the real definition of turrón really is anymore. As the years go by, anything that is sold in a rectangular tablet at Christmas time in Spain seems to be called turrón, and it can be anything from a bar of chocolate with almonds or puffed rice, to even something as strange and exotic as mojito turrón.

I like to stick with the classic turrón varieties, though. Unfortunately, most of the recipes that can be found on the internet just don’t get them right. They don’t specify anything about temperatures or how long to cook the candy, and many post the same recipes with stock pictures, which makes me wonder if they even tried the recipe at all. In other cases, I’m guessing they tried it, it didn’t turn out as it should, and yet they posted it anyway. I mean if so many people have posted the same recipe, it must be good, right? Wrong! (I later noticed in the comments sections that everybody was having the very same problems with certain recipes, but nobody offered a solution!)

I’m a bit stubborn, and while other years I have given up while trying to come up with a good recipe for turrón, I never gave up entirely. This year, I tried out several new ways of making both types of turrón, and by combining certain ideas from different recipes, I have finally come up with a recipe that works for me (and hopefully for you) for making turrón de Alicante.

When I was younger, turrón de Alicante was my favorite type of turrón. Pre-internet days, it was impossible to find it in the US, so I stocked up on it any time I visited Spain or another Latin American country at Christmas time. One year, I visited my aunt who lives in Venezuela, and remember happily stocking up at it at a big supermarket. Sad to say, that same supermarket now only houses empty shelves amidst the crisis that the country now is suffering.

Whether you can buy it where or live or not, it is empowering in a way to be able to say that you successfully made your own turrón. My husband isn’t a big fan of almonds, but even he was happy to eat my homemade turrón, and he said he liked it better than the store bought varieties! Yay!

I tried several times to make something that tasted and looked like the real deal without using any refined sugar, but I have to say that it turned out closer to what you buy in the stores if you do use some sugar. I may have to try this same recipe next time with an organic demerara sugar to see if that changes things much. I imagine that it may darken the turron a bit more, and may slightly change the flavor. I’ll let you know if and when I try it. (Which, to be honest, may be next year because by now, after making several batches of both types of turrón, I’m kind up fed up with almond nougat.) 😉

I’m really happy with the way this recipe turned out, and super excited to share it with you. 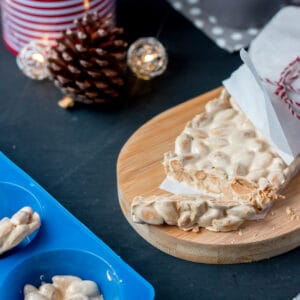