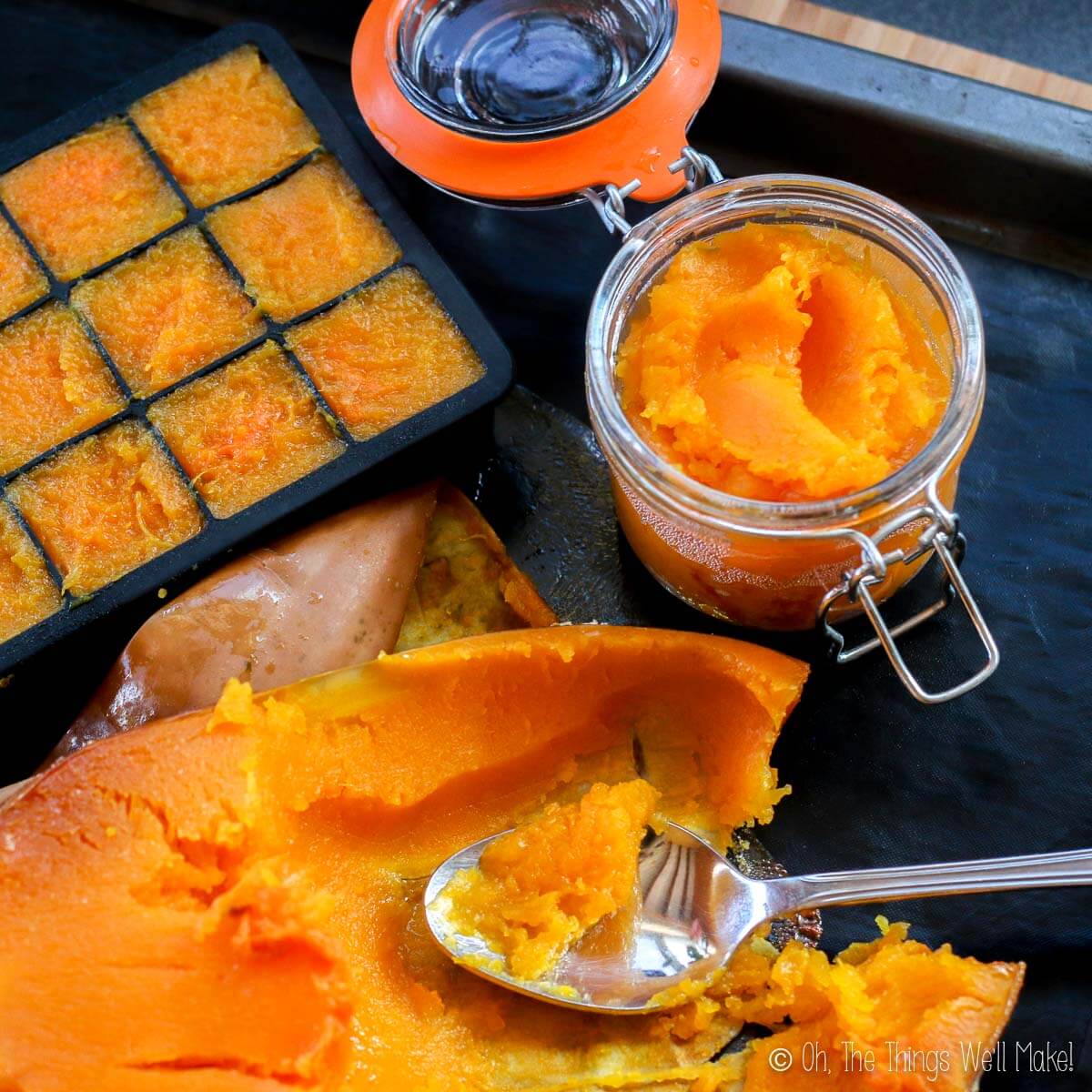 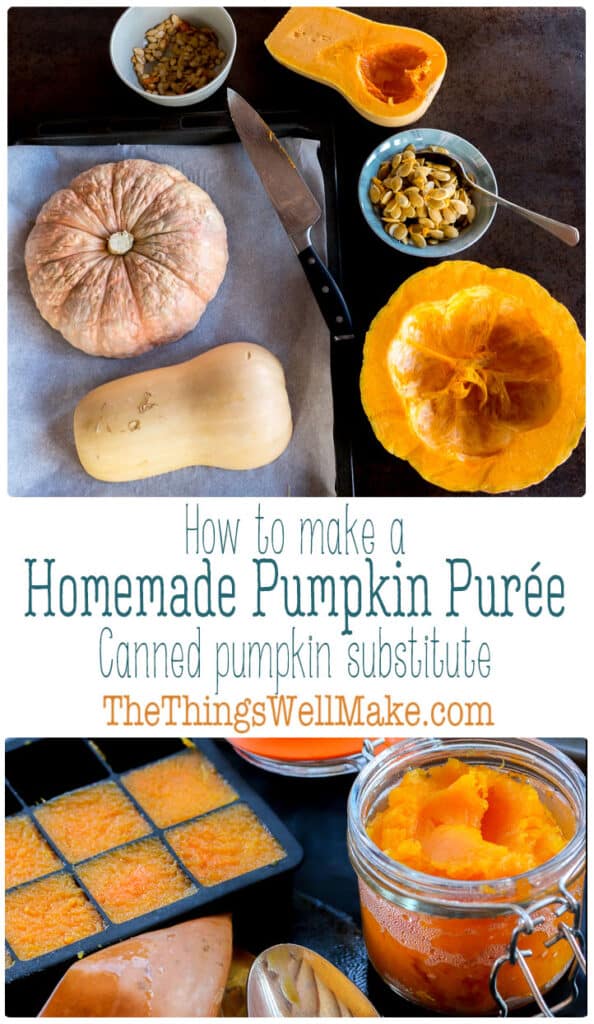 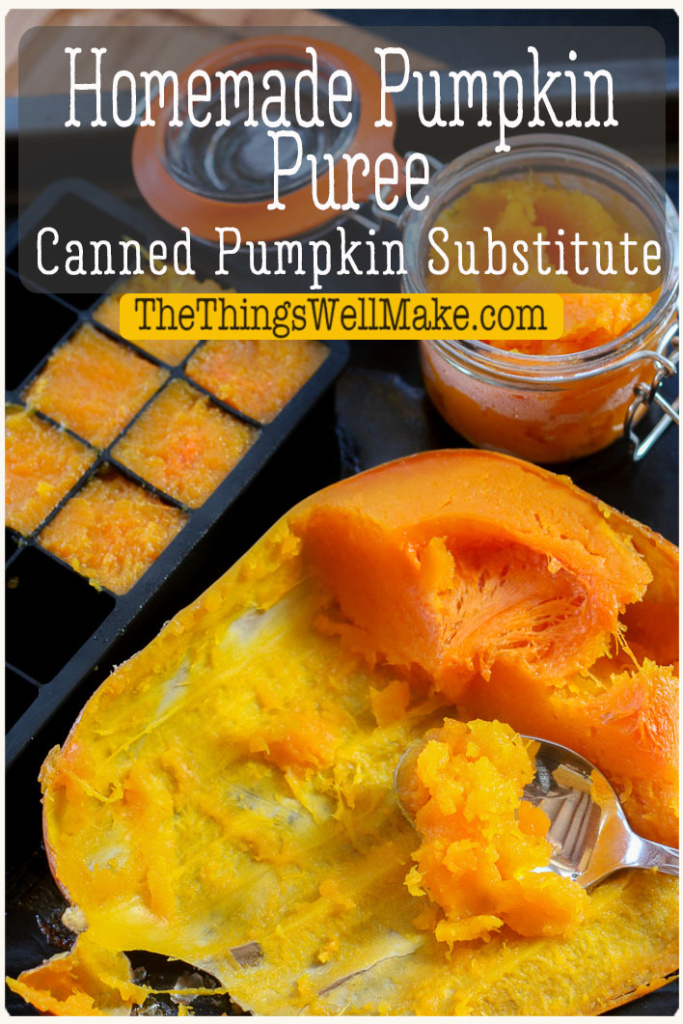 Looking for a tasty pumpkin puree to use in recipes? Store-bought brands may contain sugars and ingredients you can’t pronounce. Here’s how to easily make your own!

What is Pumpkin Puree?

Pumpkin puree is a thick paste made from cooked pumpkin or other winter squashes. It can be made by boiling, roasting, or steaming and then mashing or blending the cooked squash. The finished puree can be served warm or cold and can be used in a variety of recipes in place of canned pumpkin.

Cooked pumpkin is a healthy treat packed with vitamin A, vitamin C, and vitamin E. It’s also a good source of dietary fiber, potassium, and magnesium.

There are several reasons that you may want to consider making your own pumpkin puree rather than buying canned pumpkin.

While the producers of canned pumpkin would probably argue I’m wrong, I don’t think there is any comparison between the taste of a freshly roasted pumpkin and the bland mush that comes from a can.

Freshly roasted pumpkins have a pleasant aroma. They taste fresh and sweet. They’re so flavorful that in many countries people serve the roasted pumpkin, by itself, as a tasty dessert!

Can you imagine spooning out some canned pumpkin on a plate and saying, “Dig in!”?

While canned pumpkin is super easy to find in the United States, it’s not a common pantry item worldwide. In most countries, people are accustomed to roasting or boiling pumpkins rather than relying on a can.

I have to admit, when I first got to Spain, many years ago now, I was a little bit disappointed that they don’t sell canned pumpkin here. I wanted to make a pumpkin pie to celebrate Thanksgiving and had to figure out how to do it. At the time I couldn’t rely on the internet (yet!), and I didn’t even have any cookbooks with me.

I successfully made that pumpkin pie without canned pumpkin and without a recipe by mixing together some roasted pumpkin, cream, eggs, sugar, and pie spices. I crossed my fingers, poured the mixture into a crushed cookie crust, and threw it all into the oven. In the end, it turned out amazing, but I guess I shouldn’t have been surprised! From scratch is almost always better!

Some canned pumpkin brands add sugar or other additives like preservatives. Luckily, it’s not hard to find brands selling “100% pumpkin” instead, but there is still another problem to consider.

While canned pumpkin is sold in metal cans, those cans have a plastic lining to help prevent corrosion and maintain the quality of the food inside.

Up until recently, the majority of cans had BPA (bisphenol-A ) in that lining.

By now, many companies are moving away from using BPA in their cans, but they could be using other plastics that are just as harmful or possibly even worse like BPS (bisphenol-S) polyvinyl chloride (PVC) While the FDA states that low levels of BPA are safe, the Mayo Clinic suggests that it is a good idea to cut down on cans and plastic use for food storage.

Not surprisingly, the only ingredient in homemade pumpkin puree is pumpkin!

What may surprise you, though is that the word “pumpkin” can include a wide variety of different types of squash. Even cans of “100% pumpkin” usually include a variety of winter squashes.

Best “pumpkins” to use

When shopping for pumpkins, you may find varieties of small, round pumpkins. They are often referred to as pie pumpkins or sugar pumpkins. Despite their name, they can be used for both desserts and savory pumpkin recipes

Butternut Squash and other winter squashes

Butternut squash is also known as butternut pumpkin in many parts of the world. Here in Spain, it’s probably the most commonly found “calabaza” (translation: pumpkin). It’s what I most commonly use for my homemade pumpkin puree.

Butternut squash is sweet and perfect for using in soups and pies.

Other squash varieties you can use include Boston marrow squash (aka. Autumnal Marrow) and Golden Delicious squash.

The large pumpkins sold for making “Jack lanterns” are the main pumpkins that you’ll want to avoid. These Halloween pumpkins have been chosen for easy emptying and carving. Their pumpkin flesh is stringy, less compact, and bland. Plus, they have less of it. While they are edible, they aren’t as sweet and flavorful as other varieties.

In my experience, sweeter pumpkins and squashes will weigh more than average for their size. Less flavorful varieties tend to be stringy and weigh less.

Look for relatively heavy squashes that are unbruised. Also, check for soft spots or holes that could be a sign of damage that could lead to rotting.

There are several ways to easily make your pumpkin puree.

Roasting pumpkins in the oven is my favorite method for making a homemade pumpkin puree.

Consider saving the seeds to roast as a tasty snack! Clean the flesh off of them and sprinkle them with salt. They can then be roasted until golden brown and crispy! They’re delicious!

While I find it easier to roast pumpkins in the oven, there are times that you may prefer boiling. I’ve found that when the women here get together to make large batches of pumpkin desserts like buñuelos de calabaza, they choose boiling over oven roasting for several reasons.

To boil or steam pumpkins you will need:

While mashing the cooked pumpkin is generally good enough for most recipes, some recipes may call for a smoother puree. To achieve a nice smooth consistency, blend the cooked pumpkin until smooth. This can be easily done with an immersion blender, but can also be done in a food processor or stand blender.

Your homemade pumpkin puree can be used immediately. Store unused puree in an airtight container in the refrigerator. It will remain fresh for several days (possibly up to a week, depending on the water content and pumpkin variety).

For longer storage (up to 6 months), try freezing it. To keep it freshest, remove air contact while freezing it by covering it with parchment paper or plastic when freezing.

I like to freeze mine in perfectly cube-shaped ice cube trays. They allow you to store the cubes in plastic baggies without any wasted space in your freezer. You can see my method in my post about making smoothie cubes/homemade baby food.

Having pumpkin ice cubes handy is convenient for making quick pumpkin smoothies, or adding a little pumpkin flavor to your recipes. That’s especially handy in the fall when pumpkin spice flavors so many recipes.

Being a pumpkin lover myself, you can find a wide variety of pumpkin recipes on my blog. I even make a pumpkin spice soap!

Here are some of my favorite ways to use pumpkin puree:

These crunchy almond based Italian cookies are perfect for dipping in coffee, chai tea, or my sweet pumpkin pie dip. They’re also a grain-free, guilt-free indulgence.
Check out this recipe 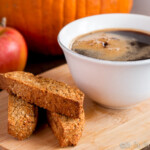 Fill your home with the delightful scent of fall spices when you make this easy homemade pumpkin butter, a delicious topping perfect for gifting. It pairs well with everything from oatmeal and yogurt to breads and cookies.
Check out this recipe 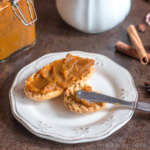 Roasting your veggies brings out the flavors in this creamy pumpkin soup, the perfect healthy comfort food for those cooler autumn and winter days.
Check out this recipe 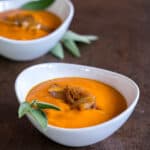 Mascarpone cheese gives this simple, sweet pumpkin pie dip a sweet creaminess that you’ll want to eat right off the spoon, or on apple wedges or cookies.
Makes around 1 cup
Check out this recipe

Perfect as a quick and easy fall breakfast or dessert, this pumpkin pie yogurt parfait layers pumpkin puree, pie spices, yogurt, and granola into a sweet, yet healthy treat.
Check out this recipe 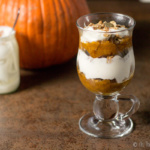 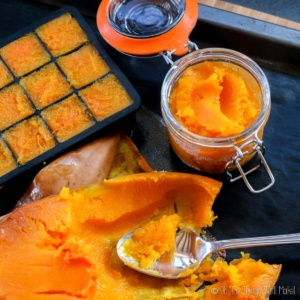 Yield: One 4 lb. (2kg) pumpkin makes approximately 2lbs. (1kg) or 4 cups of pumpkin puree. This homemade pumpkin puree can be used as-is or made smoother by blending with either an immersion blender or a stand blender. Use in both sweet and savory recipes.

Roasting the pumpkin has a shorter prep. time, but a longer cook time than steaming or boiling. Boiling or steaming will take longer to prepare, but once the water has been brought to a boil, they should only take around 10-30 minutes.

This post was originally published on October 11, 2013. It was later republished, adding new photos, tips and tricks, and other helpful information.