Popular in the Valencian region of Spain, these pumpkin fritters or buñuelos de calabaza are probably the most requested treat during the fallas festival. Learn to make them from scratch in this gluten-free version.

During the fallas fiesta here in the Valencian community in Spain, buñuelos de calabaza are the star sweet! Buñuelos de calabaza are a simple type of pumpkin fritter that is typically made of wheat flour, pumpkin puree, and bread yeast. Once fried, they are served sprinkled with sugar and usually accompanied by a small bowl of sugar for dipping them.

A couple of weeks ago, I began experimenting with adding wheat back into my diet. While my eczema patches didn’t come back, after eating homemade pizza and pasta and a few other homemade goodies, I went back to breakouts on my face and back, and just wasn’t feeling as well overall. I decided that, for now, I would go back to cutting it out of my diet again!

I had first eliminated wheat from my diet around this time last year, but I was sad about having to give up buñuelos de calabaza during the fallas festival because of it. So, this year I decided to whip up some grain free pumpkin fritters to see how they would turn out.

A couple of years ago, I tried making buñuelos de calabaza with a friend of mine. She showed me how to make the traditional recipe using wheat and pumpkin. Basically, most people weigh the pumpkin puree and add in up to half that weight in wheat flour. She, however, adds as little flour as possible, just enough to hold the pumpkin together, because she says that while the buñuelos with more flour are easier to make and end up looking better, the ones with less flour taste more like pumpkin and taste much better. I’d have to agree with her.

I tried making my own buñuelos that year, and, while they tasted fine, I found it difficult to make them with their characteristic hole in the middle. Perhaps that’s why some people choose to make them without the hole.

Unlike most donut recipes, these pumpkin fritters have a very loose “dough,” making it hard to shape them. In fact, I’m not sure I’d even call it a dough because it’s more like a pumpkin pancake batter. To shape them, she gets a bowl of water ready so she can wet her hands between steps to help keep the batter from sticking to them.

She then grabs a handful of batter in one hand and begins to squeeze some of it out of the top of her fist, forming a small ball of dough.

She then wets the other hand and grabs the ball of batter, piercing it with her thumb as she places the dough in the oil for frying.

Most people here use sunflower oil for frying these, but you can definitely try making them with a different frying oil. The best choices would be oils that don’t have a strong flavor such as expeller pressed coconut oil. To be honest, since I make these once a year at most, so I don’t worry too much about it, and concentrate more on not using the oil for very long and not reusing it for frying. (You can always use the oil for making fire starters afterwards!)

To make these grain free buñuelos, I called my friend over to help because I figured she had a much better understanding of how the batter is supposed to be. She wasn’t sure what it would be like to make these with a different flour, though, so she decided to add more tapioca flour than she would normally add wheat flour to the recipe. Unfortunately, it ended up being too much, and our first attempt at grain free buñuelos was messy.

Tapioca flour can make a very elastic, rubbery texture in certain recipes when used in high concentrations. With our first attempt, everyone agreed that the grain free buñuelos tasted good; in fact I liked the flavor better than I did the traditional batch. The problem was the texture was a bit too rubbery, and our friends teased me and said that I had invented grain free pumpkin chewing gum instead of buñuelos.

We had used up all of our pumpkin puree that day, so I started experimenting on my own another day.

To achieve a texture much more similar to regular buñuelos, I added less tapioca flour, and also added in a small egg. The resulting grain free buñuelos were definitely much better, and are very similar to the traditional pumpkin fritters that are served this time of year!

Sadly, this year was very cold and rainy, so I didn’t participate in as many of the fallas festivities here. We normally eat a huge paella outside in the street with my in-laws’ neighbors on St. Joseph’s day, but this year it was postponed because of the weather.

Instead of exploring the city streets in an attempt to see all of the fallas (the big paper mache sculptures that are set up all over town), we huddled inside just trying to keep warm. I especially feel bad for the falleros and artists who worked so hard in preparation for the celebration, only to have it ruined by cold, rainy weather. 🙁

My son was still able to have a little bit of fun. He saw some fallas on a school field trip on a tourist “train” tour of the city. They also had a party with chocolate a la taza on the last day of school. His favorite part of the fiesta, though, is probably throwing a few kids “firecrackers” and trying to scare us. 🙂 Fun times! 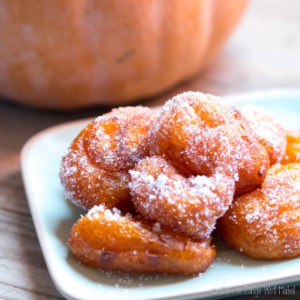 I was working with very small batches to be able to keep tweaking the recipe and get it just right, so this recipe as written doesn’t make very many buñuelos. While it made about a dozen small buñuelos, when I say small, I mean small (and even a bit smaller than the ones we photographed on a small coffee plate). You will definitely want to eat several of them. If you only want to slightly increase the recipe, I’d guess that for each large egg, you could use about 200g of pumpkin and 50g of tapioca flour.
Course Desserts
Cuisine Spanish
Tried this recipe? Tag me today!Mention @thethingswellmake or tag #thethingswellmake!
Category: Desserts & Sweets, Life in Spain, Recipes, Spanish Food & Recipes