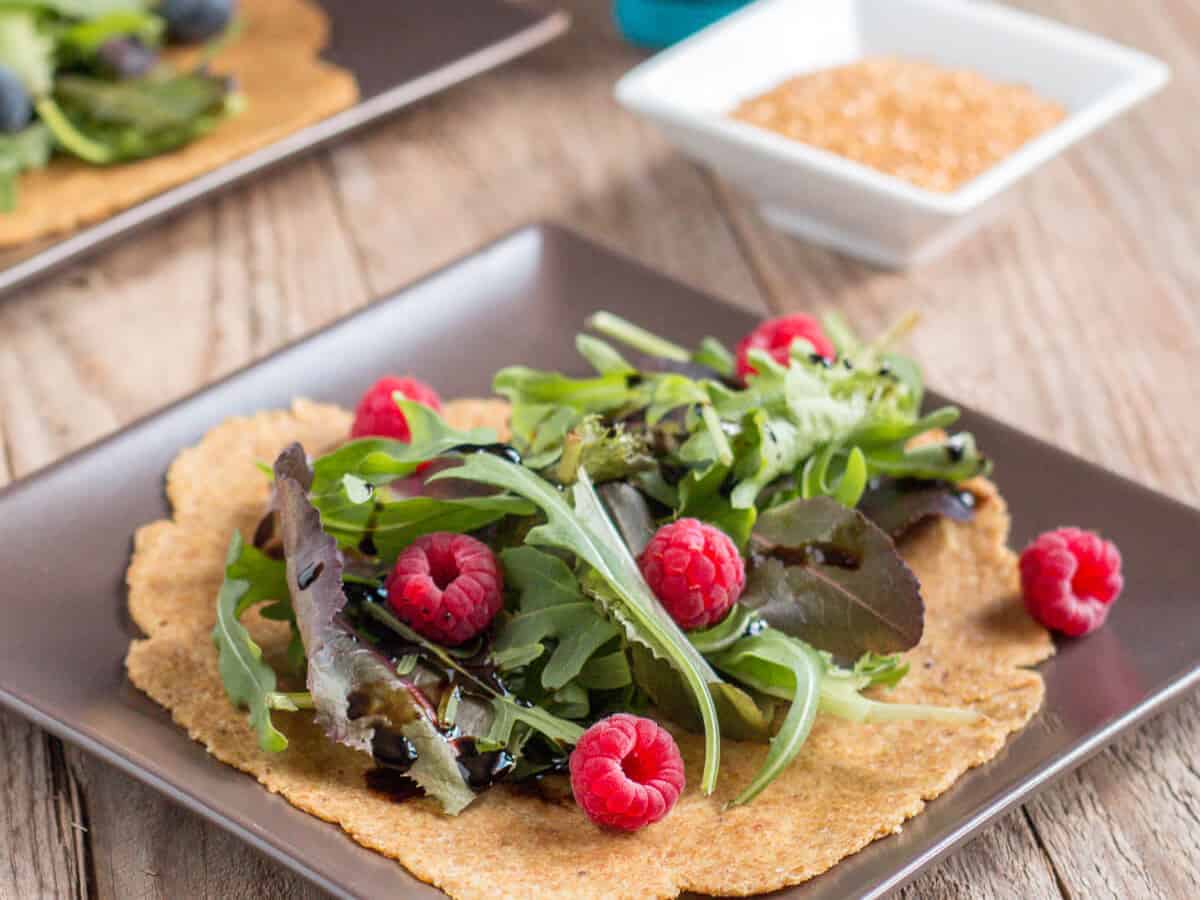 It is possible to make a pliable paleo tortilla or wrap without grains, starches, or even eggs, using flaxseeds. I especially love these vegan flaxseed paleo tortillas for making salad wraps.

Lately, I’ve been looking for new ways to make grain free and/or paleo tortillas and sandwich wraps that aren’t made mostly of tapioca and/or almond flour. While I’m not on a low carb diet, I’d like to keep my carb count relatively low. That’s something that is normally relatively hard to do if you like to eat things like breads and tortillas. Somewhat by accident one day, though, I found that flaxseeds make a wonderful base for several different types of low carb, paleo tortillas.

As I kept adapting the recipe, I was amazed by how versatile flaxseeds are, and how they allow you to make a pliable wrap with few other ingredients. My curiosity was piqued.

I wanted to try to make a simple, grain-free wrap that didn’t use any other binders like eggs because I have a friend, Krystal from Natural Fit Foodie, who can’t eat them and I thought she would be interested. (She has a substitute guide to baking without eggs for those of you who don’t tolerate them well.) Plus, I just like a good challenge every once in a while!

I will note that while most people will say that flaxseeds are paleo, a lot of stricter followers of the diet prefer to avoid flaxseeds and other seeds. It is a gray area paleo food, but for those who aren’t avoiding them, I think they’re a good option to use, especially for those who need to avoid eggs.

Grinding up the flaxseeds

When using flaxseeds for something like paleo tortillas, I prefer to grind the flaxseeds in my blender right before using them. Flaxseeds are a source of Omega 3 fats, but when you grind them up, they can go rancid quite quickly. That’s why I never buy them already ground. I sometimes grind up to a week’s worth of flaxseeds and keep them in the fridge until I’m ready to use them.

(If you are having problems griding the flaxseeds, here’s a tip: I tried grinding them in my food processor unsuccessfully, but found that it is very simple to grind flaxseeds in either a blender or a coffee grinder. They now make coffee grinders with removable bowls for easy cleaning! I have and use the one in the link.)

Thanks to one of my readers who told me that she had baked these in the oven to make them crispy, I found a new favorite snack!

This dough can easily be adapted to make flaxseed tortilla chips and/or taco shells. For those who are having issues with the tortillas sticking to the pan while making them, the technique I use in that recipe for rolling out the dough may be slightly easier for you.

I also shared a recipe for a Doritos-like seasoning blend that can be used on the paleo tortilla chips to make them more like the famous snack chips. I absolutely love them!

So, yes, you can make a thin, pliable, paleo tortilla or sandwich wrap that is low carb, grain free, and egg and dairy free! They have a slightly nutty taste that I think works particularly well for salad wraps.

The method of making them is a bit different than what you may be used to, but once you get the hang of it, they really aren’t difficult to make! 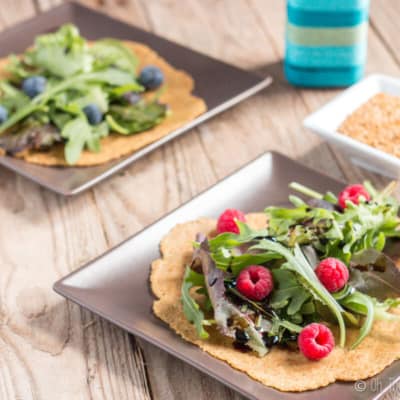 These use up a lot of flaxseeds, of course. Sometimes, though, I’d prefer to use up a lot of eggs. (I do have hens, as you may know.) That’s why I also like to make a different kind of paleo tortilla using eggs and flaxseeds. I find that one a bit easier to make because the technique is similar to making a “normal” pancake. Both are pretty simple, though, once you get the hang of it.

Should you use brown or golden flaxseeds?

I have successfully used both brown and golden flaxseeds. Here is one I made with the brown ones:

If you are curious about the salad wraps that I’ve shown in the pictures above, they are basically just simple salads made with greens and some berries.  One of my favorite dressings for simple salads like these is to drizzle them with a homemade balsamic reduction. (The store-bought ones usually have thickeners, added sugar, and other ingredients that I’d prefer to avoid.) Homemade balsamic reductions are perfect in combination with salads with fruits like my salad with bacon roses and strawberry hearts, or my caramelized goat cheese salad.

I hope you’ll give these tortillas a try and that you enjoy them as much as I do.