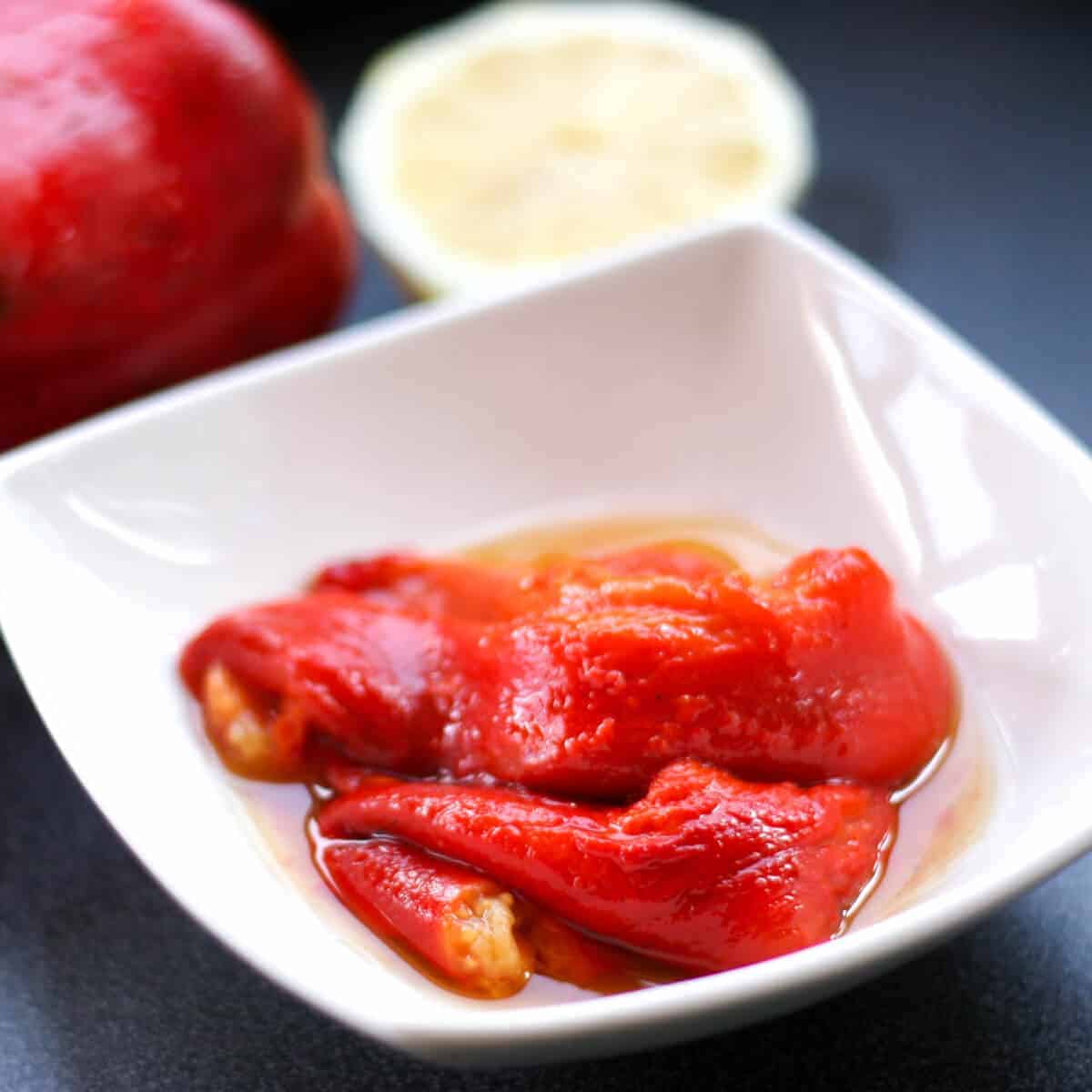 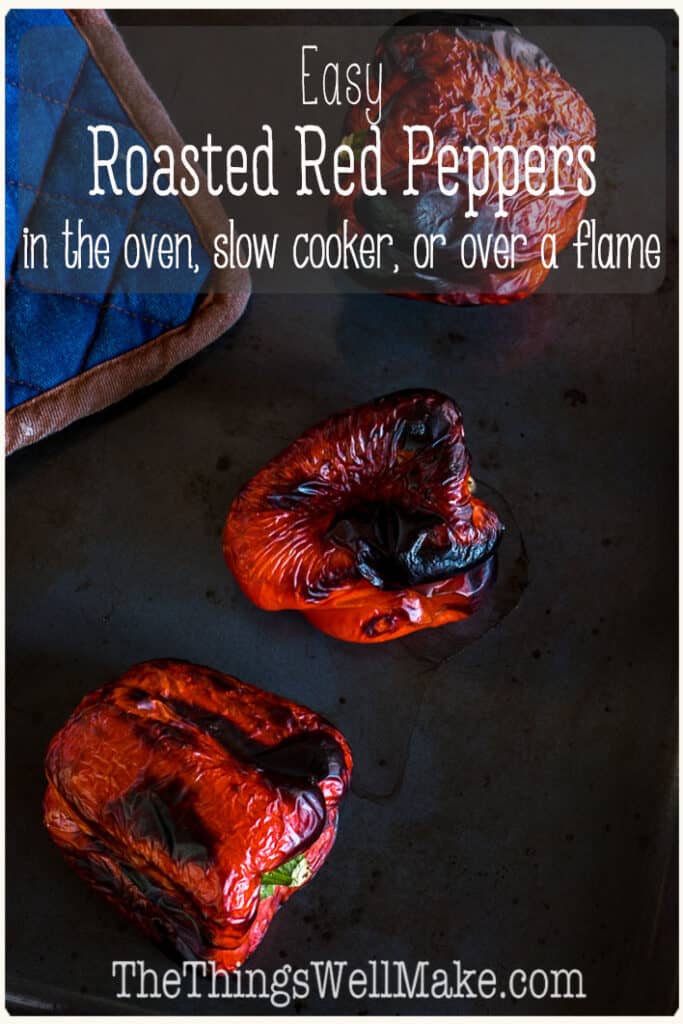 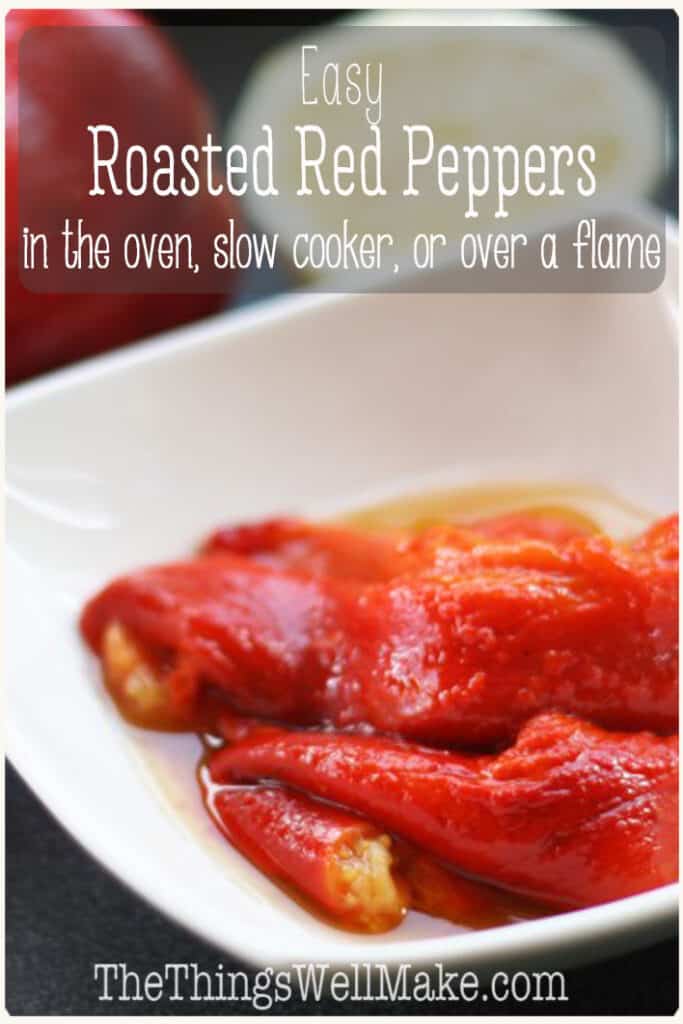 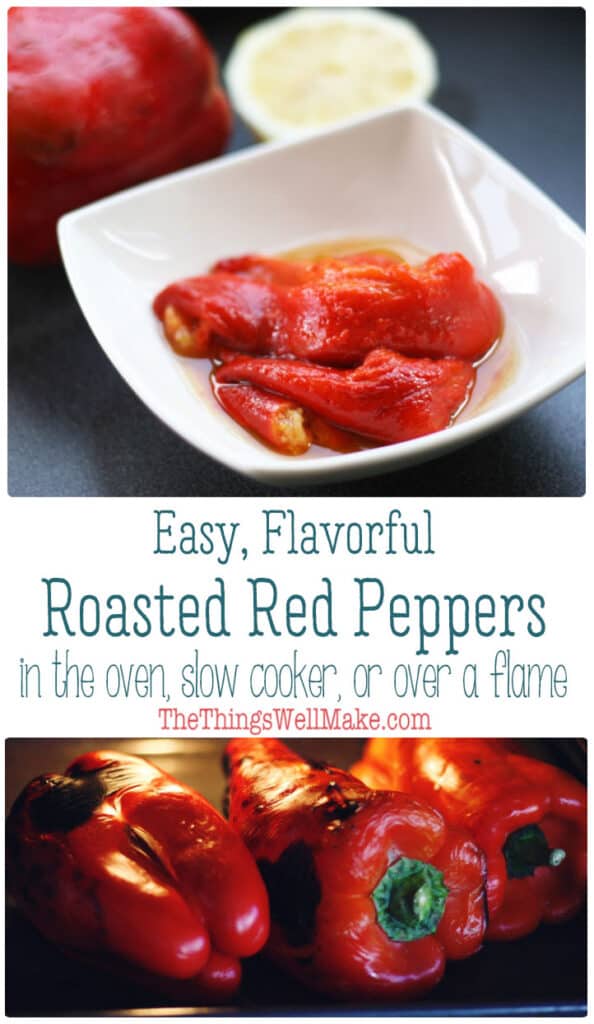 Looking for a healthy way to add flavor? Roasted red peppers are quick and easy to make. They’re packed with vitamins and antioxidants, and make a delicious addition to all sorts of dishes.

Until I arrived here in Spain, I hadn’t learned to appreciate the deliciousness of roasted red peppers. Here they are commonly made and featured in many popular dishes. The roasting process brings out their subtle sweetness which pairs well with so many foods.

While you could buy them in a jar, why would you want to? They’re so easy to roast yourself. Not only can you save money and excess packaging waste, but nothing compares to the texture and flavor of freshly roasted.

I love them so much that I make some almost every week.

Roasted red peppers are super versatile. They can be used whole (in strips) or made into a purée. The purée can be served alone as a dip or spread or can be incorporated into other purées.

In Spain, they’re served atop cocas (a cheeseless sort of “pizza” that is typical to my region), in traditional vegetable side dishes like espencat or esgarraet (a roasted vegetable dish with eggplants and red peppers), and are a common addition to bocadillos (sandwiches served on baguette-style bread).

As a garnish or topping

Served in whole pieces or strips, they can be used to garnish and add flavor to all sorts of foods. I especially love adding strips of roasted red peppers with roasted eggplant on hamburgers and sandwiches. You must try it! The combination is divine.

Once roasted, you can process them into a purée in a food processor (with a bit of olive oil) until smooth. Adding a roasted red pepper purée to soups and dips adds color and sweetness. The purée can also be used as a spread or garnish in a number of dishes.

Try using as/enhancing the flavor of the following with roasted red pepper purée:

Or use it alone as a sauce or to garnish plates (It pairs well with meat and seafood.)

Which type of red peppers should you use?

Most commonly, red bell peppers are used to make these, but you can also use other sweet pepper varieties. Italian peppers and small piquillo style peppers also work well.

Those peppers that have thin skins can be used, but they will be harder to peel.

Roasting red peppers is easy and can be done in a number of ways.

Broiling in the oven is my favorite method as it is very quick and easy. To easily roast and peel your red peppers, rinse them well, and then place them sideways on a baking sheet and cook them underneath your broiler.

If you’ll be keeping a close eye on them, you can place them around 2 inches under the broiler as shown above. As the skin begins to blister and char, rotate the peppers until they are pretty evenly charred all over.

If you won’t be able to keep as close of an eye on your peppers, you can slow roast them in the oven at around 200ºC/390ºF instead. You’ll want to place the tray around 6 inches from the top of the oven and bake for 20-30 minutes.

Once the peppers have browned, flip them over and bake for another 20 minutes or so.

Red peppers can also be charbroiled over a flame such as a BBQ grill, a fireplace, a gas stove, or a campfire. With this method, you’ll want to charbroil each pepper individually.

Once you’ve charred the area of the pepper over the flame, rotate the pepper to expose an uncooked area. Continue to roast and rotate until the peppers have charred evenly all over.

Red peppers can also be slowly roasted in a slow cooker at the high heat setting. Cook them for around 2 and a half hours. Then, turn the heat off and allow the red peppers to cool, covered, inside.

Removing the stems, skin, and seeds

Once cooled, you’ll want to remove the stems, skin, and seeds of the red peppers. If they have blistered and charred pretty evenly all over, or if you’ve slow roasted them in a slow cooker, they should be easy to peel once cool.

To make for easier peeling, though, you can also place them in a heat-safe container and allow them to cool, covered, inside. This helps steam them, making the skins easier to remove.

Cut down the pepper on one side from top to bottom. Pull apart the red pepper to expose the inside. You can now remove any remaining seeds inside.

Serve immediately, or store for later.

If you have leftovers, store them in the fridge or freezer for later. Some people also conserve them in vinegar or brine solutions.

Roasted red peppers can be stored in a covered container in the refrigerator for up to around 5 days.

For longer-term storage, up to around 7-9 days, cover them with olive oil (in a covered container) and store them in the refrigerator. You can add extra flavor by adding minced or sliced garlic to the olive oil.

To ensure you always have them on hand, freeze strips of roasted peppers for up to 6 months.

To keep them from sticking together when freezing, place the strips on a tray covered with parchment paper. Once frozen, remove them from the tray, and store them in a well-sealed freezer bag.

Watch me roast them 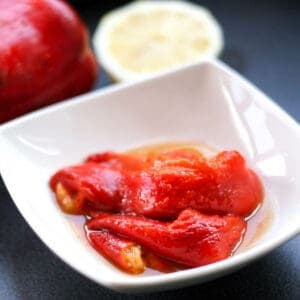 Red peppers aren’t the only vegetables whose flavor is enhanced by char-roasting and removing their skin, you can roast other veggies in the same way.

Roasted eggplant can be used to make baba ganoush, a healthy Mediterranean eggplant dip with flavors similar to hummus.

This post was originally published on May 22, 2014. It was completely rewritten and updated with new photos, cooking methods, video, and recipe card in October of 2019.