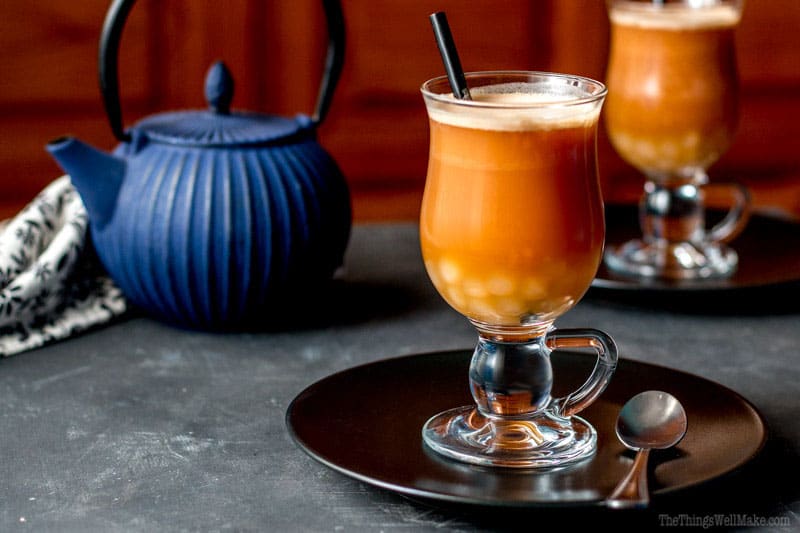 How to Make Boba, aka. Tapioca Pearls, From Scratch

Store bought tapioca pearls can be tricky to cook. That’s why I’ll show you how to make boba from scratch at home for homemade bubble tea. It doesn’t take long to prepare them, and they’re so much better than dried tapioca pearls found in stores.

In the middle of the summer heat, you may have noticed that I haven’t been posting as often lately. In part it’s due to my new philosophy of blogging. In part it’s due to having my son home for the summer, and him wanting to play with me most of the day. (I can’t be complaining about having to play in the pool and cuddle up with a sweet, adorable little 5 year old, can I?)

Mostly, though, it’s due to me not being completely caught up from my trip to the US a few weeks back.  Amidst the fiestas here in my town, lots of birthday parties and being a full time mommy, it’s taking me longer than I expected to get back into the swing of things.

The first week of our adventures in the US, we stayed at my dad’s house in Connecticut, not too far away from good old New York, New York.

Most of that week was pretty relaxed, but we did manage to throw in a fun day of exploring NYC which included a delicious meal in Chinatown. I had been to NYC as a kid, but don’t remember ever visiting Chinatown, so it was a new, fun adventure for me. I loved marveling at the Asian style architecture of normally American styled places like Starbucks, and if I hadn’t been trying to travel lightly while walking the city, I probably would have bought a few kilos of Asian fruits like lychees, mangosteen, dragon fruits… all of the fun fruits that I can rarely (if ever) find here in Spain.

Another delicacy that I wasn’t able to try was boba bubble tea.

After our meal, I eyed the bubble tea for sale at the shop across the street, and hinted at perhaps going over to get some dessert. Normally I don’t go for buying specialty teas and coffees outside the house because I know they’ll be sugar-laden and definitely not paleo. 😉 How often am I going to get the chance to try bubble tea made in Chinatown Manhattan, though, right?

Unfortunately, everybody else was full, except for my practical husband who had no interest in trying something as absurd as bubble tea, so in the interest of not drinking alone, I decided to pass and never got to try bubble tea before heading on towards Times Square and Central Park.

Fast forward a few weeks, and I was hanging out at the Asian store here in Spain, browsing all the fun, unusual treats the shop had to offer, and I saw tapioca pearls for sale. I couldn’t help but buy some to make boba at home so that I could try to make homemade bubble tea.

Unfortunately, despite having watched numerous videos and reading numerous blogs about how to cook the darn things, I couldn’t get the store bought boba to cook right!

After some research, I’ve found that it’s probably because the people who have the most success with store bought boba use tapioca pearls that have been sealed in shrink wrap and that need to be stored in the fridge and used up within a week once opened. I’m guessing those are packaged without being completely dehydrated, making their reconstitution easier later on. I have only been able to find the fully dried tapioca pearls here, though.

I tried everything from…

boiling the water and then adding the boba…which, despite boiling for over an hour ended up with rubbery, transparent balls with an opaque, raw, hard, tapioca flour center. Yuck!

The only thing that sort of worked was to boil for very long periods, followed by very long periods of cooling, usually followed by boiling and cooling again at least once more. Even the boba that almost cooked all the way through (see the picture below) weren’t very appealing, and I decided to give up on making homemade bubble tea!

The tapioca pearls that I bought showed only 2 ingredients: tapioca starch and water.

Making boba from scratch can’t be that difficult, right?

Apart from the clean up, it took me about the same amount of time to make homemade pasta as it did for me to boil the store bought stuff. Plus, mine was just so much better and fully customizable!

Why is homemade pasta and boba so quick to make?

Because store bought pasta has been dehydrated so that it will keep for longer.  Boiling it to cook it takes much longer than cooking the pasta that you have freshly made.

I no longer make homemade pasta very often; not because it takes too long, or because it’s not great, but because most of the time I have completely eliminated gluten from my diet. I have tried coming up with gluten free and grain free pasta recipes, but so far the closest I’ve come to a paleo pasta is the dough I used in my paleo dim sum recipe. (It actually tastes very similar to pasta, and has a similar texture once cooked, it’s just a lot more delicate to work with so it’s not as practical for making something like spaghetti.)

My logic, though, was that homemade boba tapioca pearls would cook similarly. Because they are fresh and haven’t been dehydrated, they would cook up almost immediately.

And I was right!

It took me less time to make boba tapioca pearls from scratch than it did for me to try to cook the store bought boba!

It’s super quick and easy to make, and it’s actually even kind of fun.

Plus it uses only 2 ingredients, tapioca starch and water, so it’s gluten free, grain free, and, thus, arguably paleo. 🙂

After me having thrown out some of his dried up, unusable playdough, my son was only too happy to help make little tapioca pearls too. Win-win!

(I may or may not have actually used his.) 😉 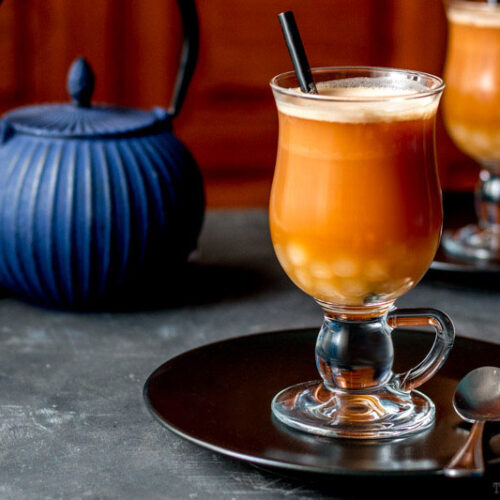 Boba, aka. Tapioca Pearls, From Scratch

Can you store homemade boba tapioca pearls for later?

I’ve been experimenting with different ways to store them.

Can you let them dry out and then use them later?

Yes, but you end up with the same sort of problem that can be had with store bought dehydrated tapioca pearls. It takes a lot longer to cook them, and you may end up with opaque, raw tapioca flour centers.

Can you freeze the cooked boba?

If you boil them again, they will warm up and turn translucent again. The texture will come closer to the original chewy texture, but I didn’t find them to be as pleasant as the ones made from scratch and served immediately.

Can you freeze the tapioca pearl dough and form the boba later?

Freezing the dough works pretty well, but the dough can get a bit crumblier and harder to work with once it thaws than when it was freshly made. The cooked boba made from frozen dough seemed pretty much identical to the boba made fresh, so if you get sick of making boba in the middle of the process, freezing the excess dough is definitely an option. I wouldn’t personally make a big batch just to freeze it, though, as it is easy enough to make when needed, and the fresh dough is easier to work with.

Can you freeze the formed, uncooked tapioca pearls?

Yes, and I’ve found that to be the best way to make boba ahead of time and store them for later. They may not turn out exactly like the ones made from scratch, but they are pretty close.

I boil them right from frozen, and boil them a little bit longer than I normally do with freshly made tapioca pearls.

Can you color and flavor homemade boba?

So far, I’ve only tried adding in a pinch of salt and some honey to my homemade boba. They turned out well, and may have been slightly sweeter than the ones that are only soaked in honey, but I didn’t really notice much of a difference in the final outcome. The flavor didn’t really change too much.

A lot of people have asked me about how to make black boba.

So, I began to research the topic. At first, I was pretty sure that the black boba just added food coloring to the boba. That’s probably still the case with most inexpensive black boba for sale. (As you probably know by now, I’m not big about adding colorants to my homemade food, so I haven’t tried using food coloring yet.)

That said, other commenters have brought other theories…

Some people have told me that the difference is that the black boba use dark sugar. There is even a type of Asian sugar called “black sugar” that many have claimed is used in black boba. That said, I’m still of the belief that no matter how much dark sugar was added to the boba, it wouldn’t be enough to make them black!

They may use black sugar in the boba, but it it likely supplemented with some other colorant to make them the deep shade of black that you’re used to seeing in shops.

What does seem more plausible, is another theory offered by readers…

I’ll probably try adding things like matcha or substituting the water with fruit juices in some of my next batches, and I’ll try to keep you updated on the outcome.

I’d love to hear what combinations you come up with!

Best Crispy Kale Chips Recipe
Next Post: How to Choose a Coconut and How to Open it