Avoid the corn syrup and artificial colors when you make these healthier homemade marshmallow peeps. It’s a fun Easter activity that isn’t as difficult as you might think.

Making homemade marshmallow peeps, on the other hand, was new to me. I had been wanting to try making them for several years now, but for some reason, I kept putting it off until now.

I’ve always made marshmallows without corn syrup. At first, that wasn’t because I had issues with corn syrup really, but more because I couldn’t find it here. I tried several different recipes, most using Lyle’s Golden syrup instead of the corn syrup because it’s a common British sugar syrup that can easily be found nearby. While it is better than using corn syrup, it isn’t something that’s allowed by people following GAPS and paleo lifestyles. For those of you in that predicament, you’ll be happy to know that you can also use honey instead.

It had been awhile since I had made marshmallows, but I had an idea that made me want to try them again; I wanted to make homemade marshmallow peeps for Easter, of course!

How are peeps made?

The peeps I remember most from when I was a kid are the yellow chicks. Their 3-D shape, made by a special machine, looked a bit too tricky to make at home. Still, that doesn’t mean that people haven’t tried it, and if you know me well enough by now, I’ll try just about anything once. 😉

I saw a few tutorials and youtube videos showing how to pipe your own marshmallow baby chicks that were similar to the peeps I remember. I’m not very good at piping, but since the process looked simple enough, I thought I’d give it a try.

While it wasn’t a total Pinterest fail moment, making peeps by piping them just isn’t as quick, easy, or practical as I would like my holiday projects to be. Getting the sticky marshmallow mixture into the piping bag was already tricky enough, but the marshmallow mixture began to set pretty quickly too, meaning that you have to work quickly if you want to make a decent number of them. (That could also be partly because I added more gelatin to my recipe than what I found in some other recipes. I think that makes them easier to cut, but more difficult to pipe.)

Needless to say, I ran out of time, and ended up with a piping bag full of set marshmallows!

I decided to reheat it, thinking I would need to beat the mixture again to get it back to a usable marshmallow state. Surprisingly, the mixture melted without losing its air bubbles, and I was able to pour the mixture into my molds directly without needing to whip up the mixture more.

(Trying to reheat it a second time was a different story. When I tried to remelt my scraps a couple of days later, they looked to be OK to use, but ended up separating into a honey gelatin layer on the bottom and marshmallow layer on top. So, remelting doesn’t always work that easily!)

Another common way of making marshmallow peeps is using a silicone peep mold.

I don’t happen to have a peep mold but did have another cute Easter mold that I used instead.

Similarly to what happened with the piping, pouring the marshmallow mixture into multiple molds takes a bit of time, and the marshmallows began to set up before I could make very many!

For my second attempt, I used the melted marshamllow mixture, and poured it into a big food grade syringe. That helped me fill the molds quickly and accurately.

I decided to pour my marshmallow mixture into a greased silicone bread pan and let it set up there.

The homemade marshmallow recipe that I used in the past used white sugar and didn’t call for checking on the temperature. The marshmallows were wonderfully spongy and soft but were also sticky and difficult to cut. After a bit of playing with the recipe, I discovered that you can do several things to make it easier to cut your finished marshmallows with a cookie cutter.

Either of these methods, or using a combination of the two, helps you end up with firmer marshmallows that are easier to cut!

I didn’t happen to have peeps cookie cutters either, of course, but knew that there was an easy way to make your own!

I’ve seen people go to the hardware store and buy sheets of copper or other metal to make their own cookie cutters. While you can do that, I find that it’s easiest to just buy cheap cookie cutters and repurpose them into the shapes that I want!

All you have to do is to figure out the shape you want, and then start using both round and flat pliers to slowly shape the cookie cutter as needed. It helps to draw out the shape ahead of time, but when working with simple shapes like this one, it isn’t necessary. I was hoping to be able to use the original welding of the cookie cutter, not wanting to cut the cookie cutter apart, so I had to conform to the amount of metal already used.

If your old cookie cutter comes apart, or you purposely cut it to make it easier to shape, you can temporarily glue it back together with super glue.

So, that’s the long way of telling you the easy, quick way to make homemade marshmallow peeps!

Once you’ve made your marshmallows, and have cut them out into the shapes you want, you’ll want to cover them with a topping to keep them from sticking to each other.

There were a few problems with using colored sugar sprinkles for covering the peeps, though.

So, I ended up rinsing the sugar off the peeps and dipped them in some paleo sprinkles instead…

If you’re following a GAPS or paleo diet, or are just choosing to avoid refined sugar, you’ll be happy to know that using naturally colored shredded coconut instead of the sugar sprinkles for decorating the peeps not only is healthier, but I found they tasted better too. Plus, they absorb more color, meaning brighter colored peeps that last much longer! (No more syrupy mess!)

These stored amazingly well, and I was actually able to keep them in the fridge for several weeks without noticing any change in their appearance!

How to make paleo sprinkles:

Essentially, you add a few drops of your homemade food coloring to some unsweetened coconut flakes and stir them well, allowing them to absorb the coloring. To dry them out, you spread them out thinly on a baking sheet and place them in the oven on the lowest convection setting for long enough to dry them out; a dehydrator would also work well. You can see the full process in my post about how to make paleo sprinkles.

For the yellow and pink sprinkles, I made them a little bit finer by grinding them with my coffee grinder for a few seconds. That made them look more authentic (mimicking sugar crystals), and made for easier decorating. For most uses of these sprinkles, though, that isn’t really necessary. 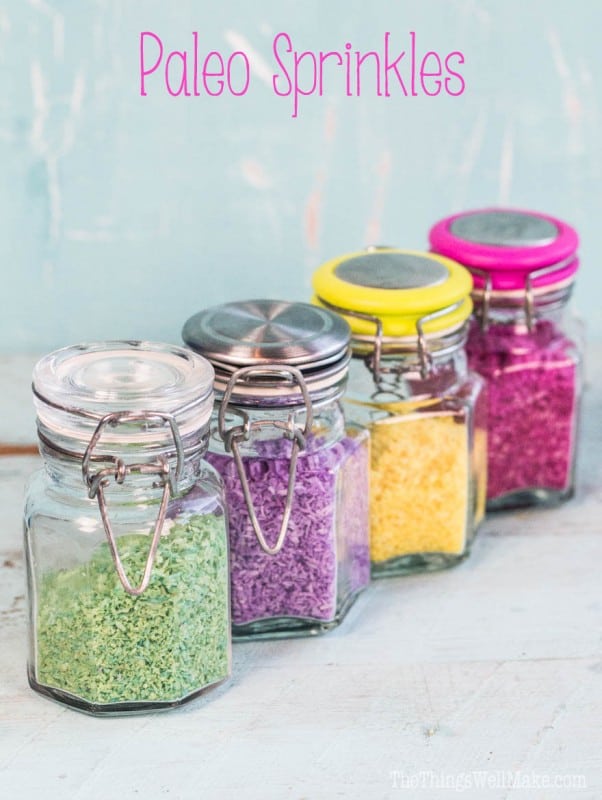 What are the peeps eyes made of?

See… not hard at all! So are you ready to make some?

Nutritional information based on making 20 peeps with this recipe. The number of peeps will vary greatly depending upon the size you've made them.

After all of that, I should mention that while the ingredients of these marshmallow peeps are OK in a paleo diet, limiting the amount of sugar you consume is important. These have been made with honey, but they do use quite a bit of it. Common sense should dictate that just because they conform to certain diets, that it doesn’t mean you should be eating a lot of them. I thought I’d mention it just in case, though.

Now that I’m done with my disclaimer, you are free to go make yourself a treat. 🙂 Happy Easter!