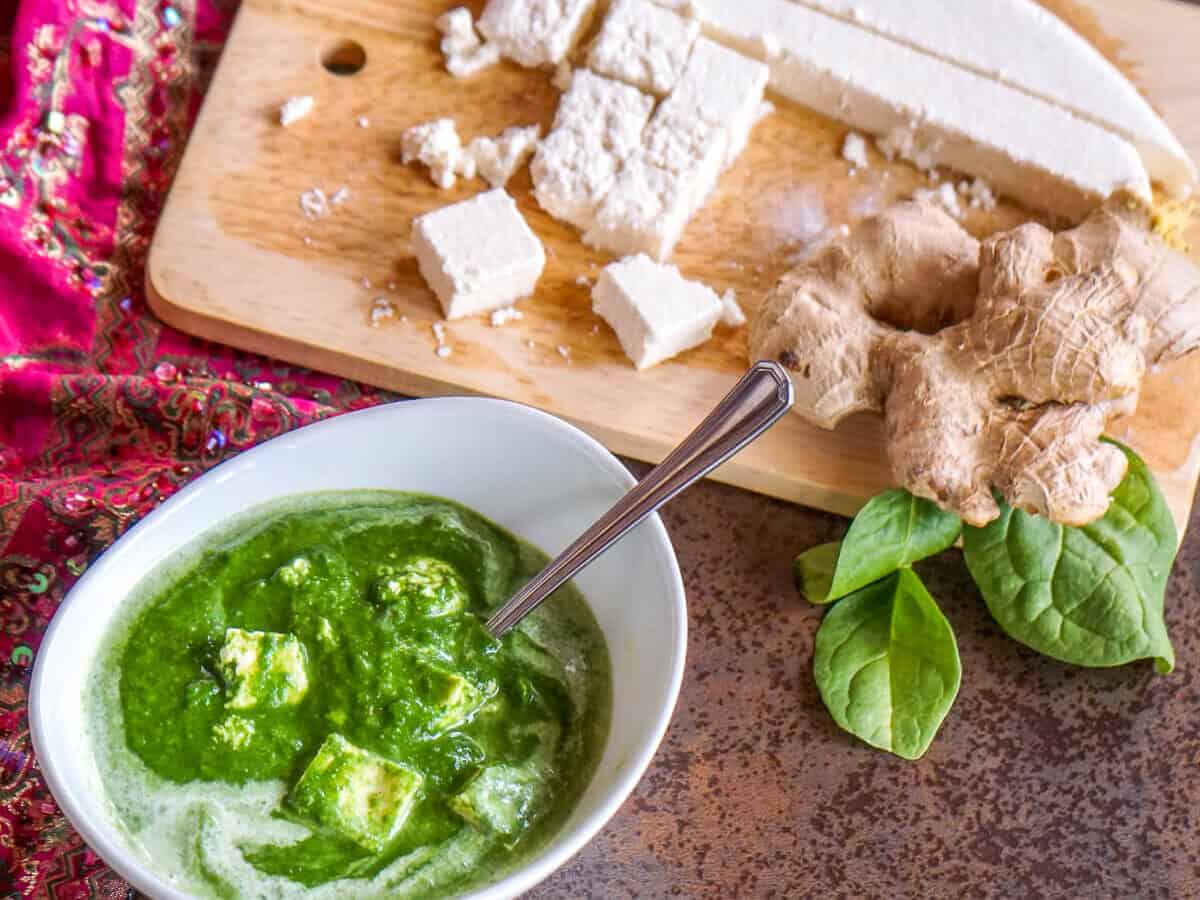 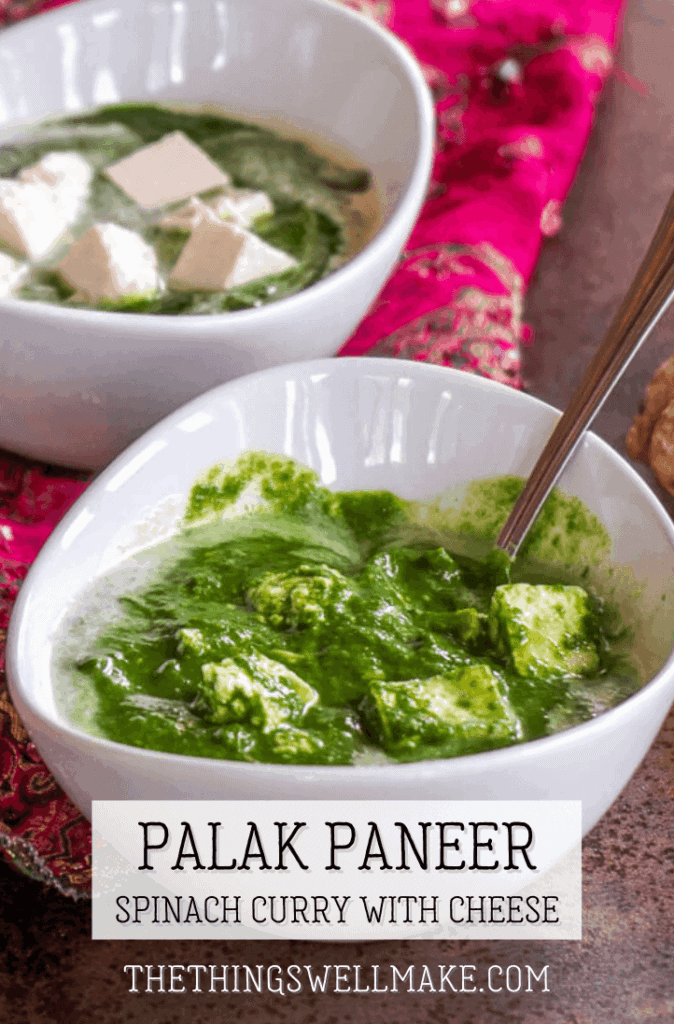 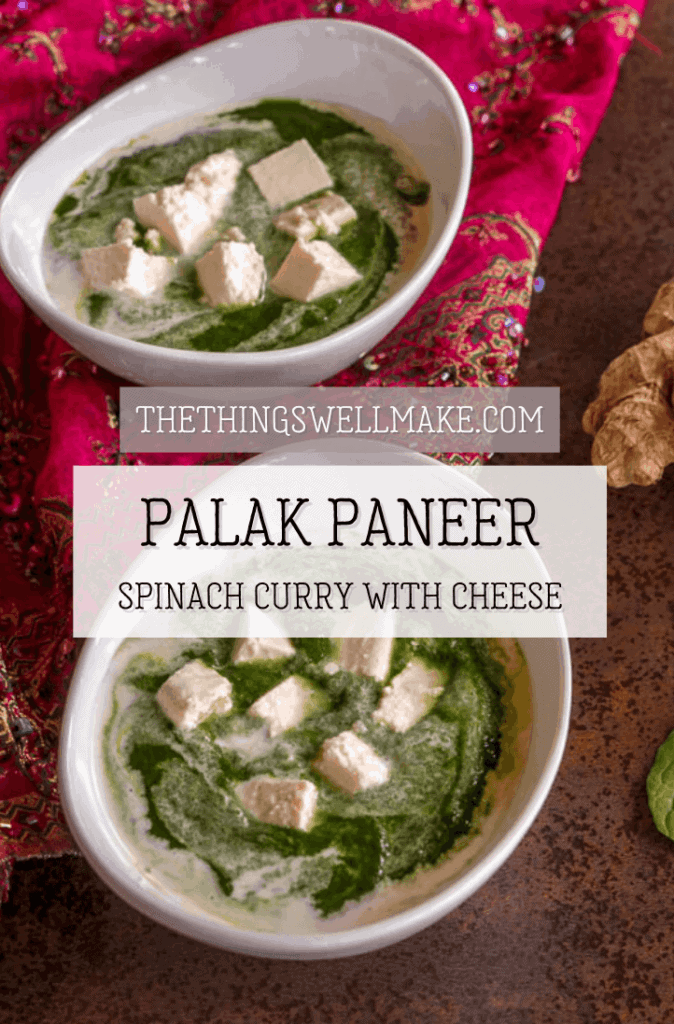 A delicious way to add some healthy leafy greens to your diet, palak paneer is a flavorful Indian dish that combines a creamy, spice-infused spinach puree with fresh paneer.

The other day, a fellow blogger, Ligia from The DaringKitchen, wrote me. She was offering to send me a recipe to publish on my blog. Ligia shares a variety of recipes from different countries and cultures around the world, so, of course, I was curious to see what sort of recipe she would have planned for me!

A couple of days later, she sent me a recipe for palak paneer with photos and a bit of an introduction…

Medical professionals around the globe have been advising us to consume plenty of greens to keep our health in top condition. While it may seem pretty easy to include a few leaves here and there, it really becomes difficult to find recipes where we can enjoy a handsome serving of leafy greens as a meal itself. Usually, soups and salads are our
best bet to serve a large quantity of greens in a meal.

There are many delicious recipes from various parts of the world that we may not be familiar with, which are nutritionally viable to meet our dietary needs. Palak paneer is one such fantastic Indian recipe that is so aromatic yet appealing to the western palate!

Ligia of the Daring Kitchen

What is palak paneer?

Palak paneer is a vegetarian Indian dish. It has a nice creamy palak (spinach) base with chunks of paneer (an Indian cottage cheese), which beautifully complement each other.

With that introduction, you’ve probably already guessed that the two main ingredients are spinach and paneer. Apart from that, palak paneer also uses fresh onion, ginger, garlic, and a delicious blend of spices.

When I went to try Ligia’s recipe, I was happy to see that I had most of the ingredients on hand. I was only missing the paneer cheese and the coriander. Fortunately, it’s quick and easy to make your own paneer. I suggest making your own as homemade tastes best and is also generally much cheaper. Here in Spain, paneer is impossible to find anyway.

When choosing spinach, young leaves are the best choice. I also prefer using organic mainly because spinach is usually on the EWG Dirty Dozen™ list of fruits and vegetables with the most pesticides. You can use whatever you have, though. I’ve even made it with frozen spinach and it worked just as well!

I haven’t been able to find coriander here, so I used dried oregano the first time I made this instead. You can also replace it with cumin and/or a mix of cumin and oregano. I’ve tried it both ways, and have to say that I love the flavor that the cumin gives the recipe.

If you don’t happen to have garam masala, you can use curry powder instead. A combination of curry and allspice could also work in a pinch.

Depending on how spicy you like your food, you can adjust the amount of cayenne pepper or chili peppers, or not use them at all. I personally liked the spiciness of the cayenne, but I used less than what Ligia called for in her recipe.

Cooking palak paneer is a two-part process. You first need to make a creamy spinach puree. Then, you spice it up with a flavorful blend of spices garnished with chunks of soft paneer.

Begin by boiling the spinach for just a couple of minutes. Ideally, you just want the spinach to wilt, and don’t want to overcook. This allows us to keep it a bright green color. To halt the cooking process, rinse the cooked spinach in cool water and then drain it fully. (You can also use some ice to further cool it.)

To add flavor to our dish, we’ll be cooking up some onions, garlic, and ginger, and will add them, along with our spice blend, to the spinach.

Begin by finely chopping the onion and cooking it in some olive oil in a pan over low to medium heat until softened.

Ideally, you want to cook the onions until softened before adding in the minced garlic and grated ginger. This allows the flavor of the fresh ginger and garlic to really stand out as they won’t be overcooked. Let’s be honest, though. I’m horrible at following recipes and always find myself doing my own thing. So, when I made this for the video and pictures, I sautéed all three together. It was still delicious. So, if you screw that up as I did, don’t worry too much about it. 😉

I will say that the next time I made this recipe, I added the ginger towards the end of the cooking process and loved the depth of flavor that the mostly raw ginger added. Feel free to experiment with the recipe to find your favorite way to make it.

It’s now time to make a smooth purée with the spinach. Most recipes purée the spinach with some water to get a nice, smooth mixture. They then add the spinach purée to the cooked onions and cook everything together to evaporate away any excess water, thickening the sauce.

In my video, you’ll see that I went rogue again. I added the cooked onions to my blender along with the spinach leaves and spices and puréed everything together. By blending everything together, I ended up with a thick, smooth mixture immediately, with no need to add water nor to cook the spinach further to thicken it. That keeps the spinach bright green and results in a very smooth purée.

Perhaps the palak paneer purists (how’s that for alliteration?) will object to my method as maybe the onions are meant to add some texture to the dish. I quite liked the smoothness that resulted from blending everything together, though. If you want more texture, just don’t purée the mixture as thoroughly or follow the recipe as written.

Putting it all together

Once you’ve combined the onion mixture with the spinach and spices, it’s time to add the cream and the paneer.

Here, again, I played with the recipe a bit. I found the spinach mixture to be delicious on its own, so I only drizzled a small amount of cream over it and swirled a little bit into the top layer. You can add as little or as much cream as you want, though, or eliminate it completely. The milky flavor of the cheese may be enough for you!

Ligia suggests using coconut cream. I didn’t have any on hand, so I used what I had. I bet the coconut complements the other flavors well, though, so you may want to try her suggestion!

Once you’ve added as much cream, or coconut cream, as you like, you can cut the paneer into cubes and add it to the spinach purée. Generally, the paneer is added uncooked, but some people like to pan fry it first. I’ve tried both ways by now and liked it both ways. Uncooked, the paneer is creamier and makes for a smoother dish.

Spinach is rich in insoluble fiber, carotenoids, vitamin C, vitamin K, iron, folic acid, and calcium. It is also a good source of potassium, magnesium, vitamin E, vitamin B6, and vitamin B9. Besides this, spinach contains vital plant compounds such as lutein, nitrates, zeaxanthin, kaempferol, and quercetin. Phew!!

Quite a nutritional profile, right?

Ligia of the Daring Kitchen 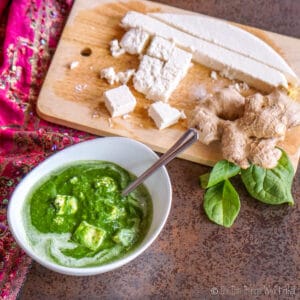 How to Make Paneer
Next Post: Healthier Homemade Marshmallow Peeps (No Corn Syrup)