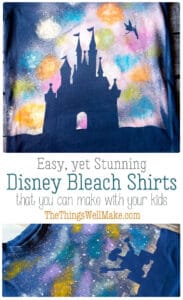 This easy peasy galaxy Wall-E t-shirt can be made in under half an hour, and older kids can make it with some supervision. 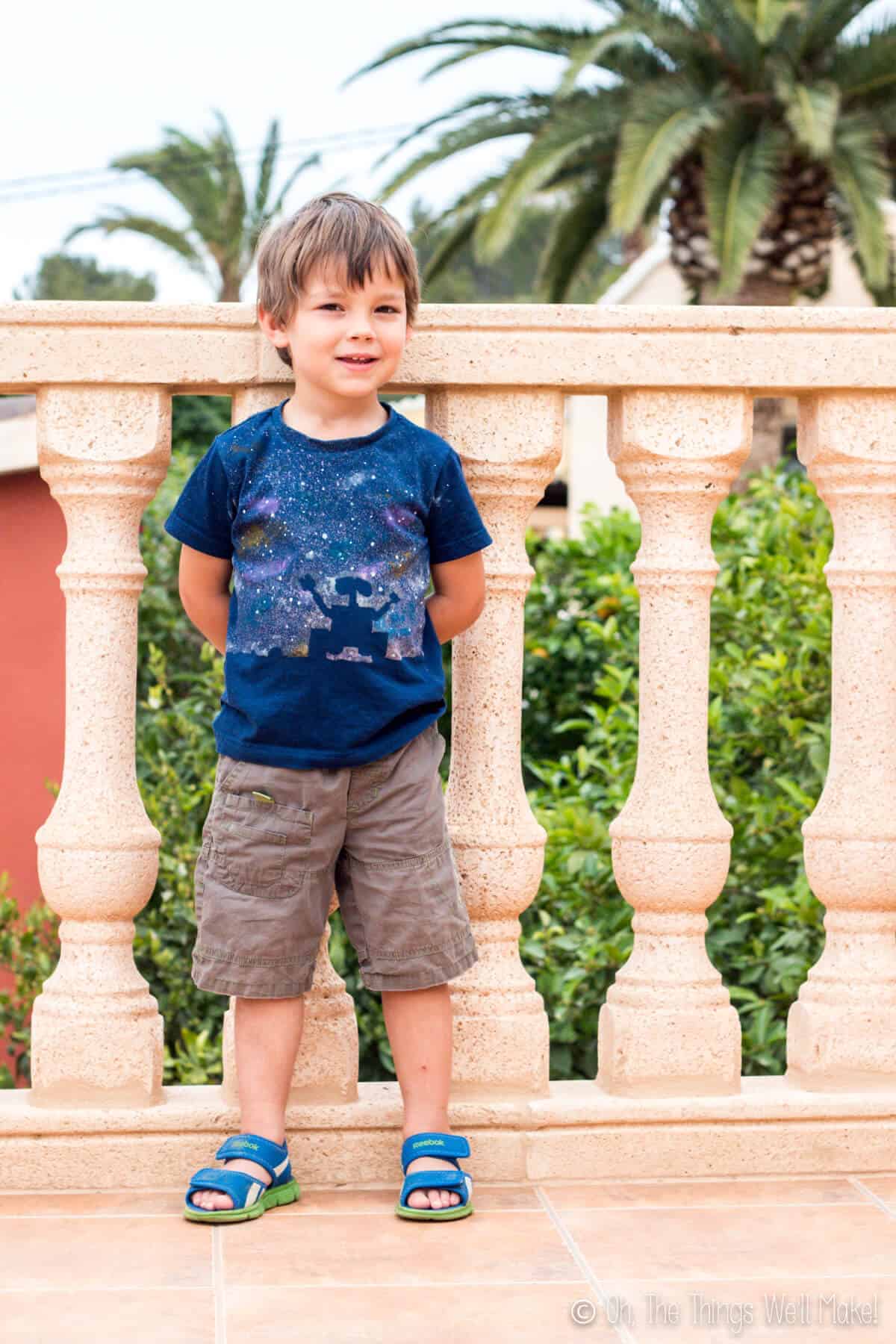 Lately, my son, who before would only either want to watch Cars or Cars 2, has been cheating on his favorite movies. He has a few new Disney favorites: Wall-E, Up, and Bolt. His new favorite, though, seems to be Wall-E.

Unfortunately, it isn’t quite so easy to find Wall-E merchandise as it was for me to find him everything Cars. Luckily, I don’t let that stop me ever.

I ended up whipping up a few freezer paper stencils of Wall-E to make him some cute t-shirts. My first two t-shirts, though, ended up being very complex. I don’t know if I’m a masochist or if I just love a challenge sometimes, but they ended up being much more difficult than I had planned them to be.

When watching the movie, though, I came up with an idea. I loved the scene of Wall-E reaching into the stars, and thought there must be a way to make a stars shirt with a silhouette of Wall-E.

Watch my son and I make the Galaxy Wall-E t-shirt for the 3rd time!

I wanted to make a Galaxy Wall-E t-shirt!

So, I ended up googling “make a galaxy t-shirt,” looking through the images, and ending up at this tutorial which showed how to make one using a bleach t-shirt technique.

I wanted to take it one step further, though, and mask out an area with freezer paper. I had been meaning to try out the whole bleach t-shirt idea for quite some time now anyway. So, I immediately went to it.

How to Make a Galaxy Wall-E shirt:

The first time I made this shirt, I noticed that a few areas of bleach had bled through when I peeled the stencil off. I had used a lot of liquid bleach. Since then, I’ve been using a gel bleach made for laundry. (Here in Spain, they sell certain bleaches in the cleaning section and others in the laundry section.) When using those, even when used full strength, I haven’t had the same issues with bleeding. 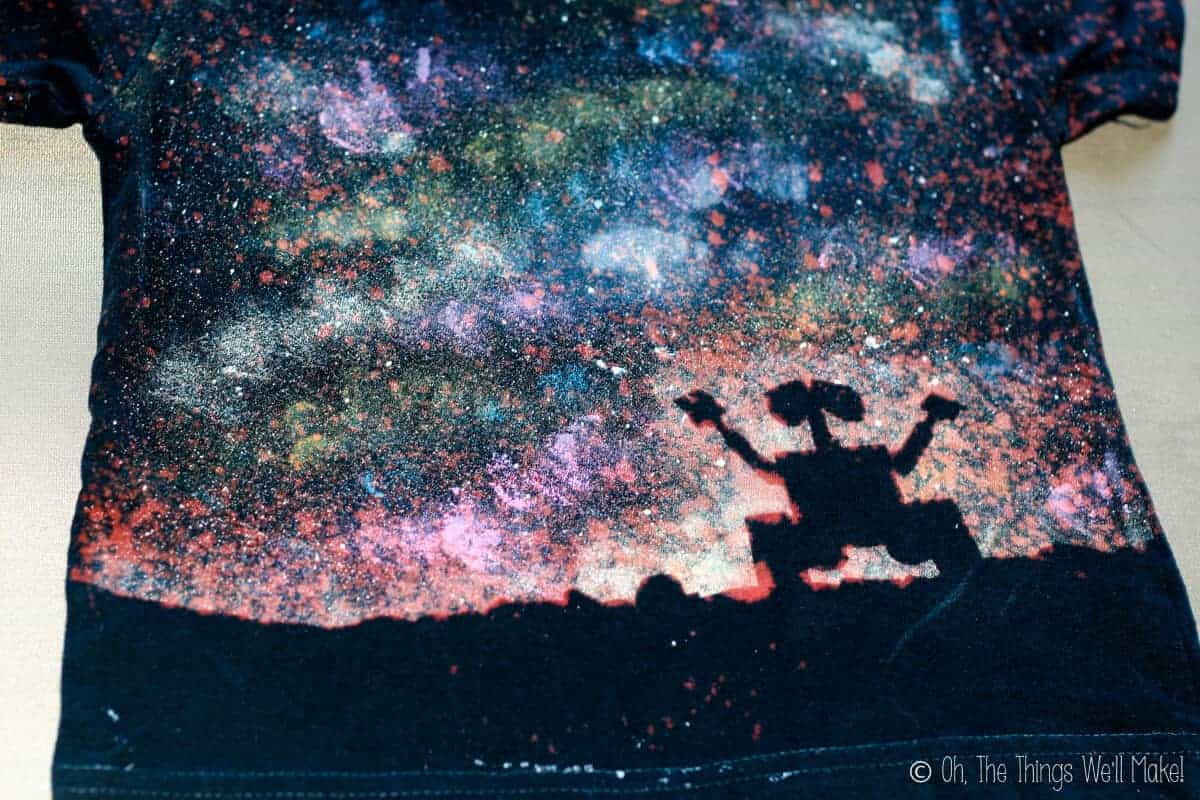 I was able to fix the problem areas by covering them with black paint. I dabbed it on to make it look like there were stones and other objects in the dark, shaded parts of the t-shirt. To make things easy, I used the unused half of my stencil and ironed it onto the now painted and bleached part of the t-shirt. That reversed the exposed areas of the t-shirt, leaving only Wall-E’s silhouette and the ground area in front of him exposed. I sponged those areas with black paint, concentrating on the areas that were bleached. 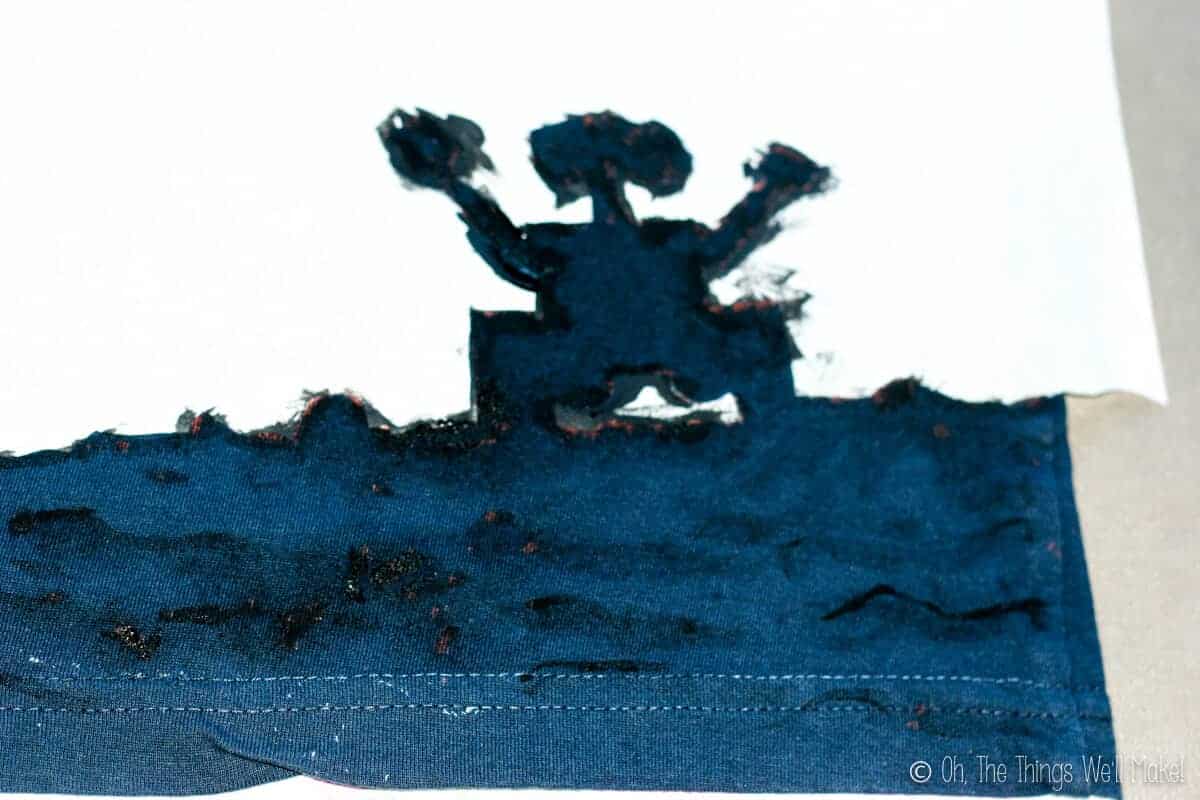 One would never know about all of the mistakes that were made along the way. Nor would anybody guess how quickly and easily this shirt can be made!!

Any white blotches that you get from white paint falling on the shirt can be easily dabbed into the shirt to make another colored cloud.

I’ve made this t-shirt 3 times by now, and my son helped me this last time. Every time the shirt has turned out slightly differently, but we’ve really liked it every time. This last time, I decided to add a little bit of bleach at the very end of the process but forgot that I had twisted the spray cap in order to close it. Rather than spray out in a fine stream, I ended up with big streams across the front of the shirt. 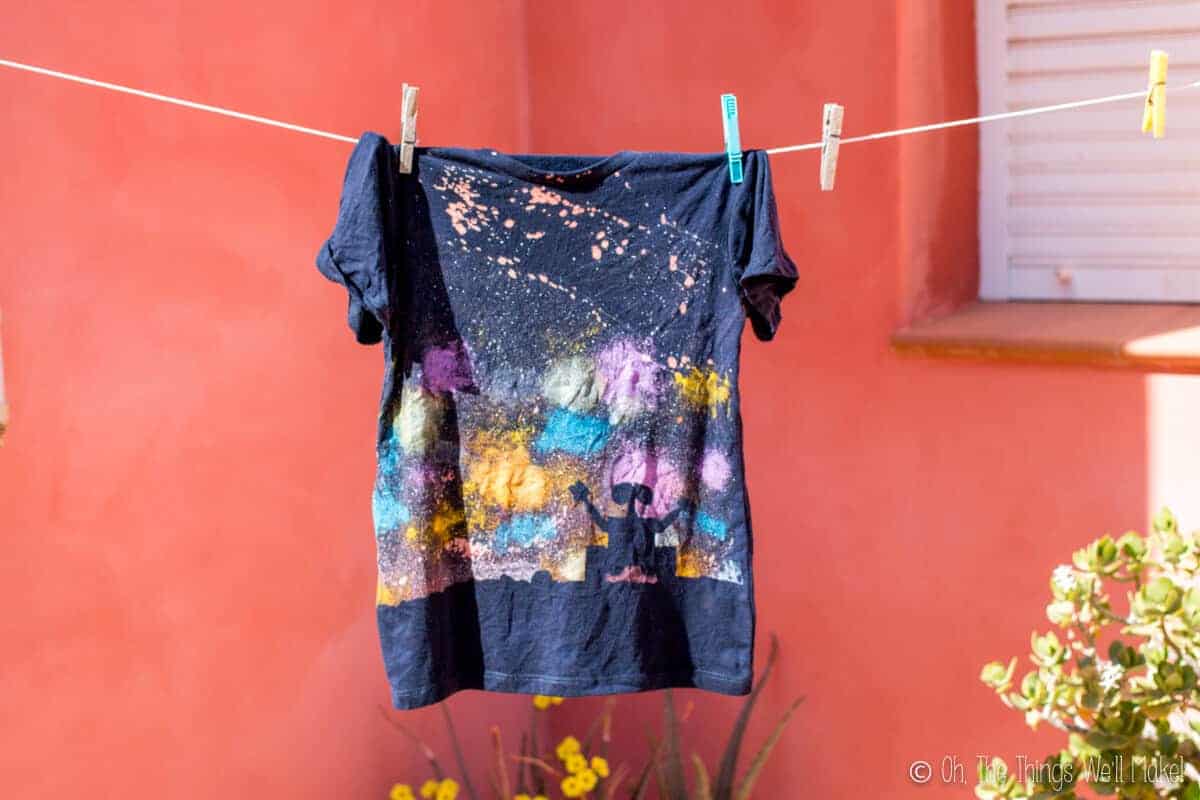 Honestly, I think it looks pretty good no matter how you do it.

Using the idea for other designs…

My niece liked my son’s shirt so much, that she wanted to make one of her own before her trip to Disneyland Paris. We settled on making a castle with fireworks, and added Tinkerbell’s silhouette for a bit of fun! 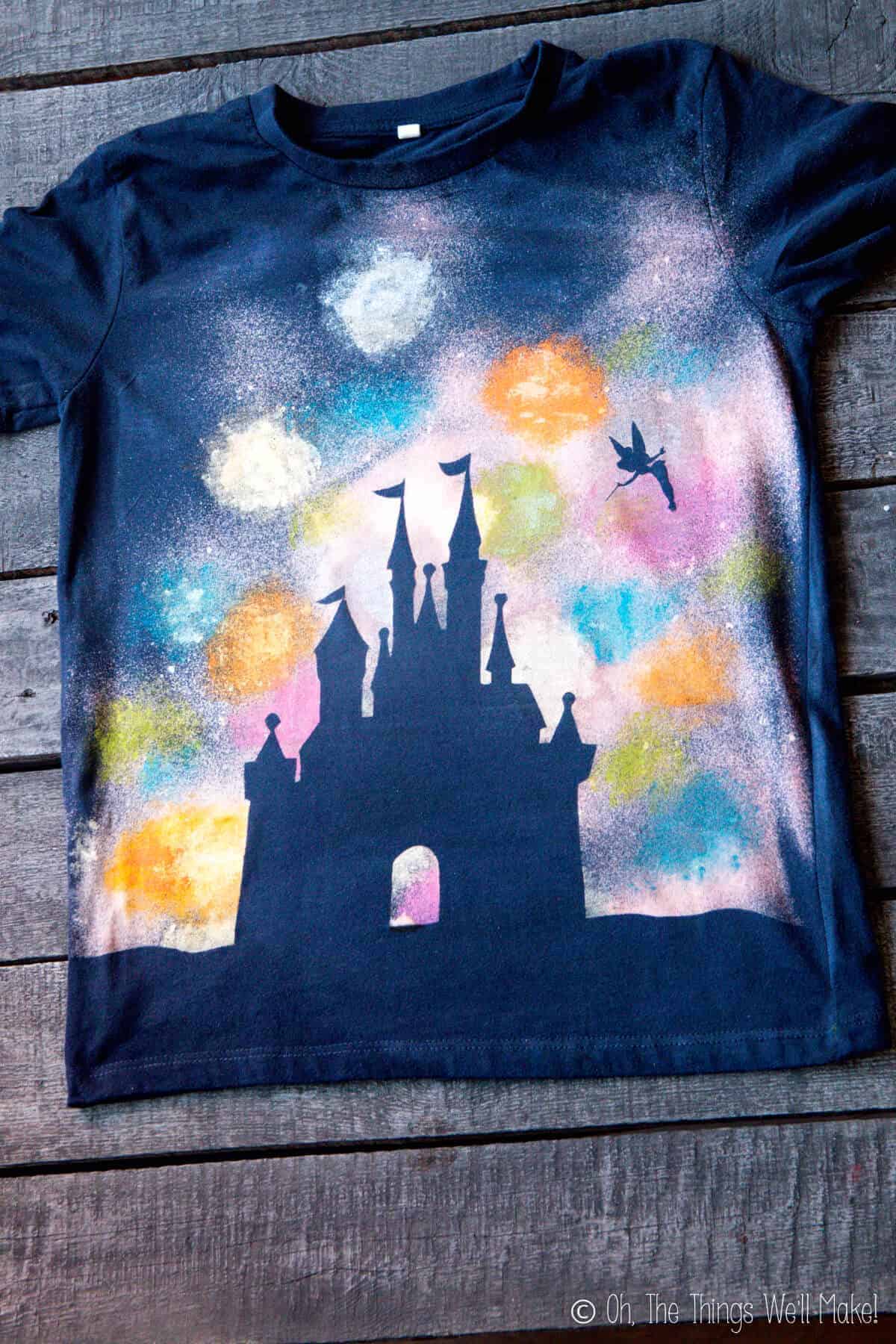 I definitely think this is a fun project to do with your kids, no matter what you decide to make. I’d suggest you handle the bleach, and supervise them working with the paints.

I’d love to see some of your ideas and can’t wait to see your finished t-Shirts!

Starting a New Blog
Next Post: Make Wall-E and Eve Stencils and T-Shirts