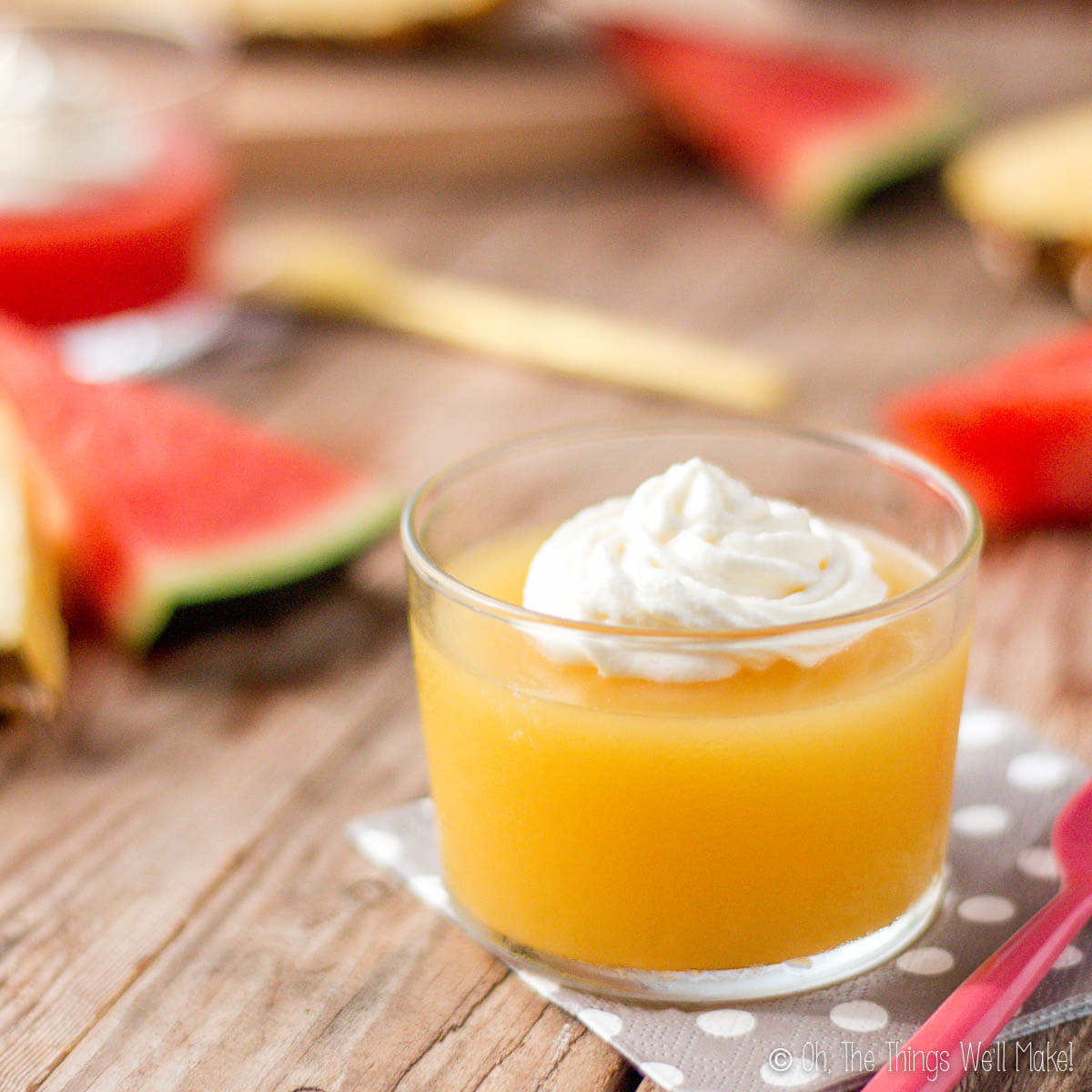 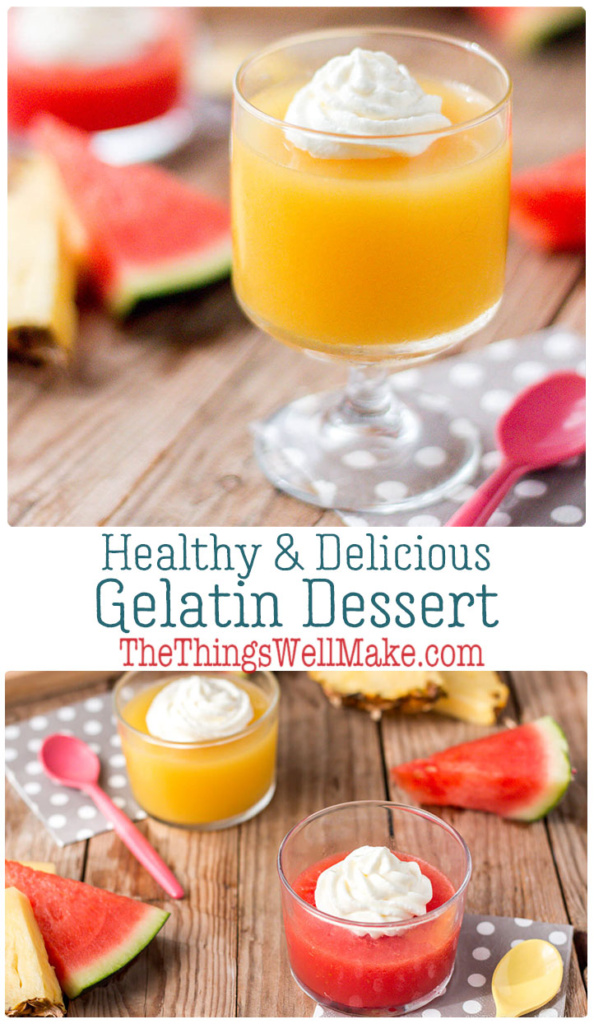 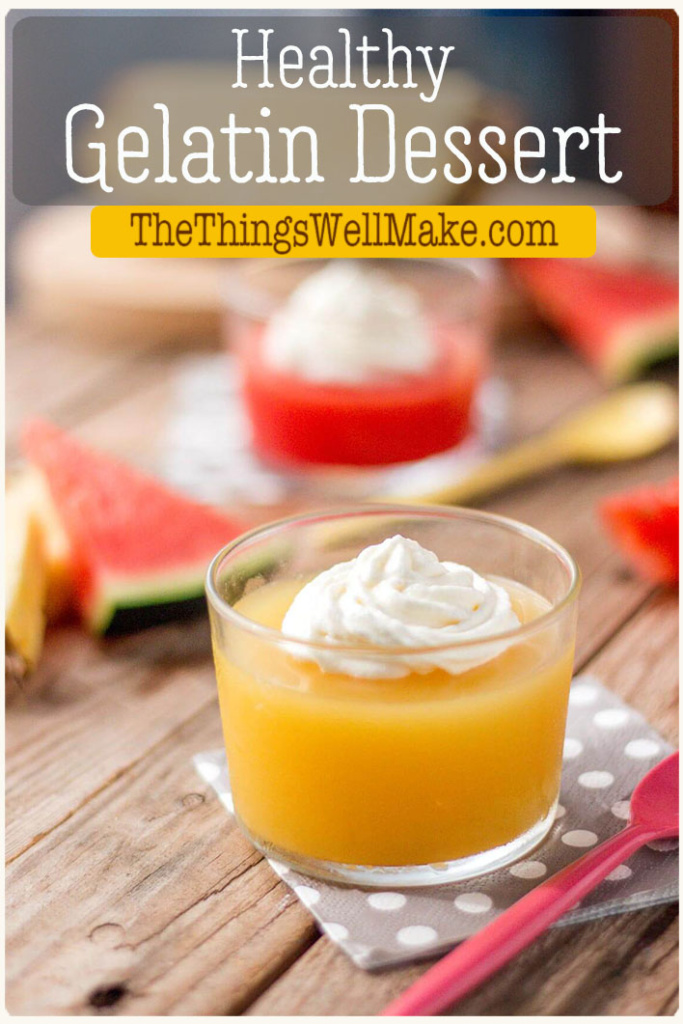 Ditch the artificial colors and flavorings of packaged Jell-O by making your own healthy gelatin dessert using fresh fruits and fruit juices.

Pin this recipe for later

Here in Spain, packaged gelatin mixes aren’t very popular. We don’t have the Jell-O brand and the only available mixes generally only come in one or two colors or flavors. They do sell some pre-made gelatin desserts in the refrigerated section of the supermarket, though.

After seeing my son eat a bright red gelatin dessert at my mother-in-law’s house, I decided to try to make him a more natural alternative.

The great thing about making a gelatin dessert at home is that you can control the ingredients. You can reduce the amount of sugar or use whatever sweetener you prefer. Plus, you have a whole new world of flavors available to you sans the artificial colors and ingredients!

Making a gelatin dessert is super simple and you only need two ingredients: fruit and gelatin. While you can use fresh fruit and purée it yourself, you can also use store-bought fruit juice.

Many fruits are sweet enough to make a sweet, delicious dessert without needing to add any sort of sweetener. Some fruits, especially those lower in sugar and on the more tart side, might benefit from the addition of sweetness. You can either add a sugar syrup, some honey or maple syrup, or use a low-carb sweetener like stevia.

It’s fun trying out all sorts of different fruits to see how they’ll turn out. By now, my favorite two are probably watermelon and pineapple. While I use fresh watermelon for my gelatin, I normally chose store-bought pineapple juice vs. fresh pineapple.

When making watermelon gelatin, I normally use around a quarter of a small watermelon for each tablespoon of gelatin. That amount of fruit generally makes around 2 cups of watermelon juice.

You can also use a type of seaweed called agar (or agar-agar) for those avoiding traditional gelatin. “Gelatin” desserts made with agar will be firmer and less “creamy” than those made with gelatin. If choosing agar powder instead of gelatin powder, use around half of a tablespoon of agar powder for every 2 cups of juice. (You can slowly adjust up as needed, but too much makes a rubbery dessert.)

If using agar, you’ll need to boil the mixture briefly to activate it. Once activated, the agar mixture will gel even at room temperature. If yours isn’t gelling, you may need to return the mixture to the saucepan and cook it a bit longer to ensure it is ready to gel.

While I normally love using fresh fruits when possible, in the case of making gelatin, there is good reason to choose fruit juice sometimes. Certain fresh fruit purees, like pineapple, won’t allow the gelatin to set.

Some fruits have proteolytic enzymes that, when used fresh, will keep the gelatin from gelling. The proteases in these fruits break down the protein bonds of the gelatin, keeping it from setting. A long time ago, I found out the hard way when I tried to make myself pineapple gelatin from the fruit I had at home.

You may recognize some of these fruits as being natural meat tenderizers for the very same reason. Just think, pineapple is so good at breaking down proteins that even your mouth can feel a bit tender after eating it!

If wanting to make gelatin with any of the following fruits, you’ll either need to cook them long enough to break down the enzymes or you’ll need to use pasteurized juices.

If you puree or juice one of the above fruits while fresh or frozen, the proteases in those fruits remain intact. They break down the bonds in the gelatin, keeping it from setting.

On the other hand, almost all store-bought fruit juices are pasteurized. The pasteurization process kills off the enzymes that keep the gelatin from gelling. While that’s great for making a gelatin dessert, keep that in mind the next time you buy a store-bought fruit juice thinking it’s the same as a juice that you’d make at home from fresh fruit!

When using fresh fruit, first, make the fruit juice or purée. Depending on the fruit used, you’ll need to remove skins and seeds first. Use a juicer or place small fruits, or small pieces of larger fruits, into a blender and blend until smooth. I normally keep all of the fiber and the tiny seeds of fruits such as berries, but you can also choose to strain the juice for clearer gelatin.

Also depending on the fruit chosen, you may want to add some water (or something like coconut water) to thin out the juice. I don’t add any water when using fruits with a lot of water content like watermelon. I do usually add some to purées made with berries as they can be quite thick.

I usually use around 2-3 tablespoons of water or juice for every tablespoon of gelatin for blooming the gelatin. For this recipe, I use around 2 cups of liquid total. This can be only fruit purée or a mixture of fruit and water.

Once the gelatin has dissolved, remove the saucepan from the heat. Then, add the rest of the fruit puree, stirring it until it is well incorporated into the gelatin mixture. Taste the mixture for sweetness and add a sweetener of choice if you feel it needs it.

Once you are happy with the flavor, pour the mixture into serving dishes. Place them in the fridge until the gelatin is fully set.

If using juice instead of fresh fruit, the process is even easier!

First, soften the gelatin in around one-fourth of a cup of juice.

Next, heat around 3 quarters of a cup of the juice over medium heat in a saucepan. It doesn’t need to come to a boil but should be warm enough to dissolve the gelatin.

Add the softened gelatin to the saucepan with the juice, and mix until the gelatin has completely dissolved.

Once it has dissolved, remove the mixture from the heat source and add the remaining cool juice. Stir them together thoroughly. Taste the mixture for sweetness and add honey or another sweetener if you feel it needs it. (This will depend a lot on the fruit used.)

Pour the mixture into serving dishes, refrigerate until the gelatin sets.

Apart from adjusting the recipe for sweetness by taste, you can also adjust the consistency of the gelatin.

The ratio of one tablespoon of gelatin to 2 cups of liquid normally makes gelatin with a consistency similar to that of Jell-O. (The consistency may vary somewhat depending on the juice or purée used.) If you want thicker gelatin that you can cut into squares (like “finger Jell-O”), increase the amount of unflavored gelatin.

If you find the mixture too sweet, or just want a change, adding a dash of lemon or lime juice can also add a new dimension to the flavor.

A fun way to serve homemade gelatin is to freeze it in popsicle molds to make gelatin popsicles. They’re a delicious treat in the summer. Not only is their texture a bit “creamier” than icy pops made with only fruit juice, but they are also less messy. Because of the set gelatin, these popsicles don’t drip is they melt! That makes them great for kids.

For some fun serving ideas, see my post dedicated to making gelatin popsicles. 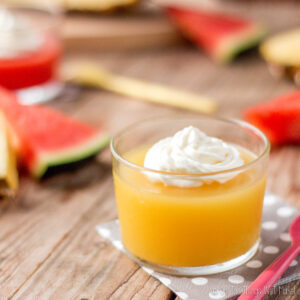 Making gelatin from a fruit puree

Nutritional information based on using 2 cups of pineapple juice and no added sweetener. When cooking the gelatin mixtures, they don’t need to come to a boil but should be warm enough to dissolve the gelatin well. A vegan “gelatin” can be made with agar powder. (Begin with half a tablespoon of agar powder to check the consistency. You can reheat with more if you feel it needs it. (Too much agar makes a rubbery dessert.) If using agar, you will need to boil the mixture to activate it. Once activated, it should gel even at room temperature. If it doesn’t gel, cook a bit longer.
Course Desserts
Cuisine American
Special Diets Gluten Free, Low Calorie, Low Fat, Low Lactose, Low Salt
Keyword gelatin dessert, Jell-O
Other Diets Dairy free, Paleo
Tried this recipe? Tag me today!Mention @thethingswellmake or tag #thethingswellmake!
Serving: 1half cup serving | Calories: 78kcal | Carbohydrates: 16g | Protein: 3g | Sodium: 9mg | Potassium: 162mg | Sugar: 12g | Vitamin C: 12.5mg | Calcium: 16mg | Iron: 0.4mg

This post was originally published on September 1, 2016. It was rewritten, adding new photos and video in July of 2021.