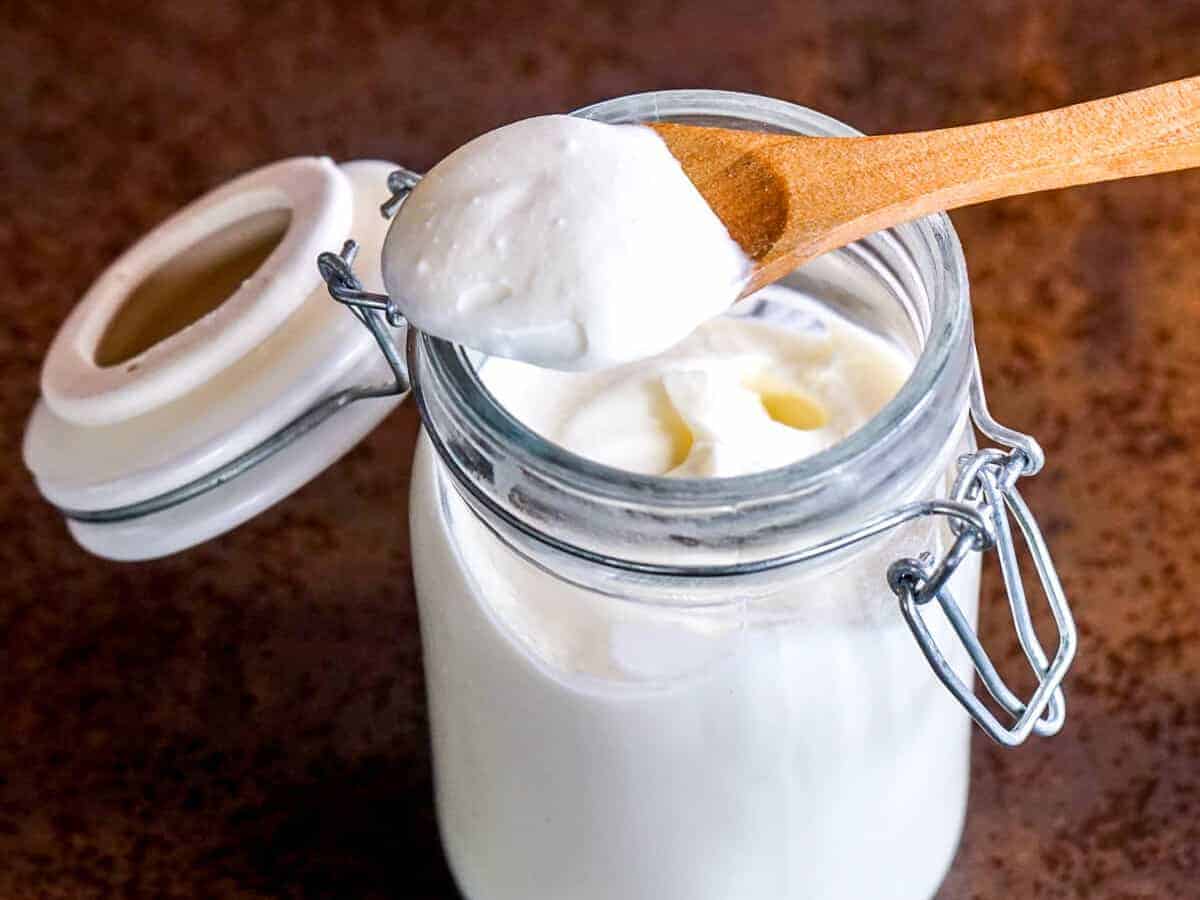 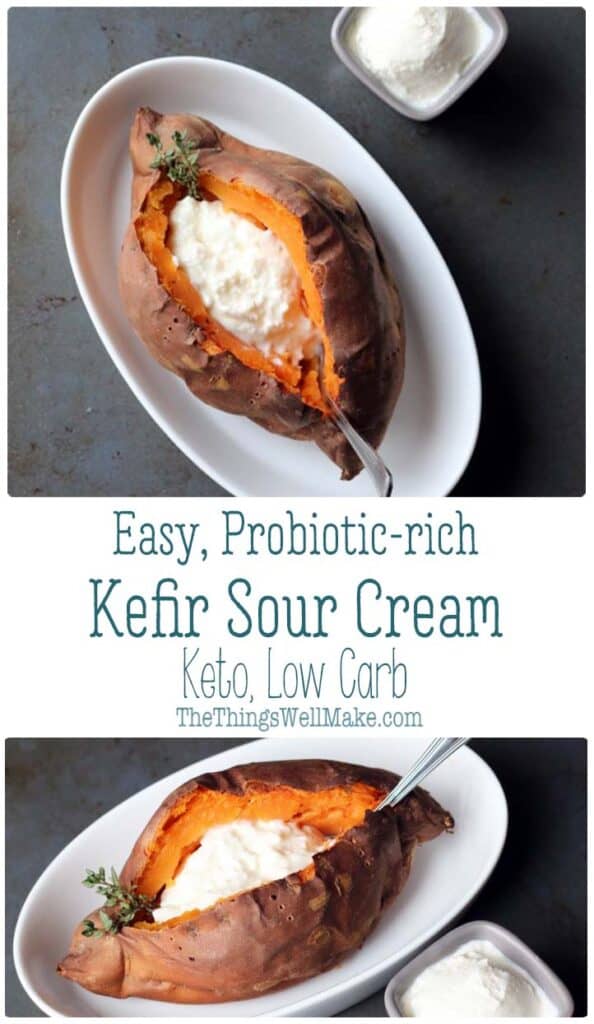 A tasty way to add probiotic goodness to your life, kefir sour cream is super easy to make and tastes delicious!

Kefir sour cream may just my be favorite of all of the kefir goodies that I have made myself over the years. Not only is it tasty, but it is super easy to make!

The first time I made it was by accident. I was trying to make some sort of kefir ice cream (aka. Frozen kefir). To make a smoother ice cream, I wanted to add more fat content to the recipe. To achieve that, I added some kefir grains to a heavy whipping cream. The idea was to make a kefirized cream to incorporate into the recipe. (If you don’t know what kefir grains are, I explain more about them in my post about how to make kefir.)

Kefir grains will thicken milk into a delicious yogurt-like product, known as kefir. Milk kefir is, however, generally thinner than yogurt.

After leaving the kefir grains in the cream overnight, I was surprised to find an almost solid mass of kefirized cream

I loved the resulting cream, but it was very difficult to remove my kefir grains from the solid mass. (Normally, you strain the grains from the milk so that you can reuse them in your next batches.)

After the messy, albeit delicious, first attempt a kefirizing cream, I was determined to find an easier way to make it. I decided to try using a sort of second fermentation, like people often do when making water kefir and kombucha.

Guess what? It worked! I ended up with a smooth and creamy kefir sour cream that was delicious.

The ingredients are just as simple as the recipe itself. You only need some milk kéfir and some heavy whipping cream. You can use a lighter cream, but keep in mind that the resulting product will be thinner than if you use a heavier cream. The higher the fat content, the thicker the resulting sour cream!

This may just be my easiest recipe on the blog. (Although I do have a few that are pretty simple. Have you tried my 5-minute watermelon sorbet?)

Just mix together the kefir and the whipping cream, and you should immediately notice that the cream begins to thicken. I’m not sure if it would thicken right away, in the same way, if you are using store bought milk kefir vs. homemade. That said, store-bought should work fine if you allow it time to ferment.

Mix together the ingredients fully with a spoon. You want the milk kefir to be fully incorporated into the cream mixture.

While it should thicken immediately, it probably won’t be very sour yet. You can use it immediately in place of mascarpone in recipes, but if you want something sourer, you need to ferment it more.

To get a sour “sour cream,” we need to allow the mixture to ferment for a while.

Fermenting is a simple process, it just takes a little time and patience. All you need to do is to cover it and leave it at room temperature for several hours or, even better, several days. The longer you allow it to ferment, the more sour it will get.

You may also notice that with time, some of the whey will separate out. (It’s a pale yellow liquid that will float on top of the cream.) You can either mix it back into the cream or pour it off to remove it. (By removing it, your cream will be slightly thicker.)

Once you are happy with the level of tartness, you can slow the fermentation process by moving your kefir sour cream to the fridge.

The cool thing about kefir sour cream is that it is very versatile. If you use it before it gets sour, it is almost like mascarpone, and can be used for desserts!

It makes a great garnish. You can also use it in any recipe that would normally call for sour cream.

How long does it keep?

Even outside of the fridge, it generally doesn’t go bad, it just gets sourer and sourer with time. Eventually, you may find it too sour to enjoy. (It likely won’t last that long anyway, as it’s delicious!) 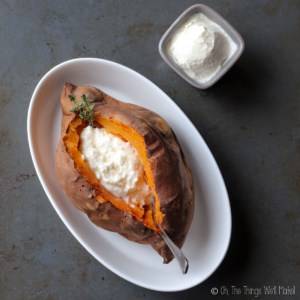 Kefir sour cream is very versatile. If you use it before it gets sour, it is almost like mascarpone, and can be used for desserts. It also makes a great garnish. You can also use it in any recipe that would normally call for sour cream. It goes especially well as a garnish for Mexican recipes or served atop baked potatoes and/or baked sweet potatoes.

How long does it keep?

Because it has been fermented, kefir sour cream will keep a long time. (It will keep much longer than the cream would have kept had it not been fermented.) Even outside of the fridge, it generally doesn’t go bad, it just gets sourer and sourer with time. Eventually, you may find it too sour to enjoy. (It likely won’t last that long anyway, as it’s delicious!)
Course Condiments, DIY Pantry Foods, Side dishes
Cuisine global
Special Diets Gluten Free, Low Salt, Vegetarian
Keyword frozen kefir, sour cream
Tried this recipe? Tag me today!Mention @thethingswellmake or tag #thethingswellmake!
Serving: 1Tablespoon | Calories: 44kcal | Carbohydrates: 1g | Protein: 1g | Fat: 5g | Saturated Fat: 3g | Cholesterol: 17mg | Sodium: 6mg | Potassium: 9mg | Sugar: 1g | Vitamin A: 188IU | Vitamin C: 1mg | Calcium: 10mg | Iron: 1mg

As a bonus, I’ll teach you how I make my baked sweet potatoes. They’re the perfect accompaniment to the sour cream.

Baked sweet potatoes are very simple to make. All you have to do is to clean the potatoes and prick them with a fork to help let steam escape and prevent them from exploding.

After around 30 minutes, start checking on the sweet potatoes to see if they are starting to soften. When they do begin to soften, turn off the heat of the oven. Leave the sweet potatoes in the oven to finish cooking while you finish up the rest of your meal.

Once ready, slice the sweet potato open. Serve it topped with your homemade kefir sour cream.