You are here: Home / Make it Yourself / Surfactants / A Beginner’s Guide to Working with Natural Surfactants 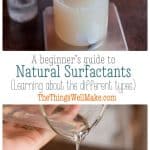