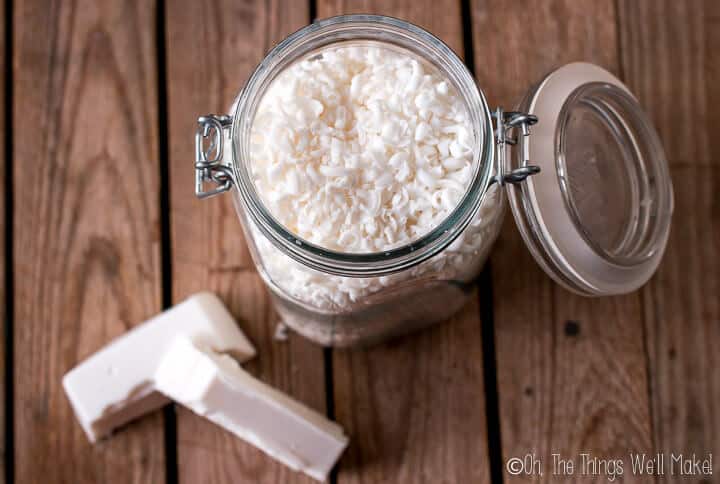 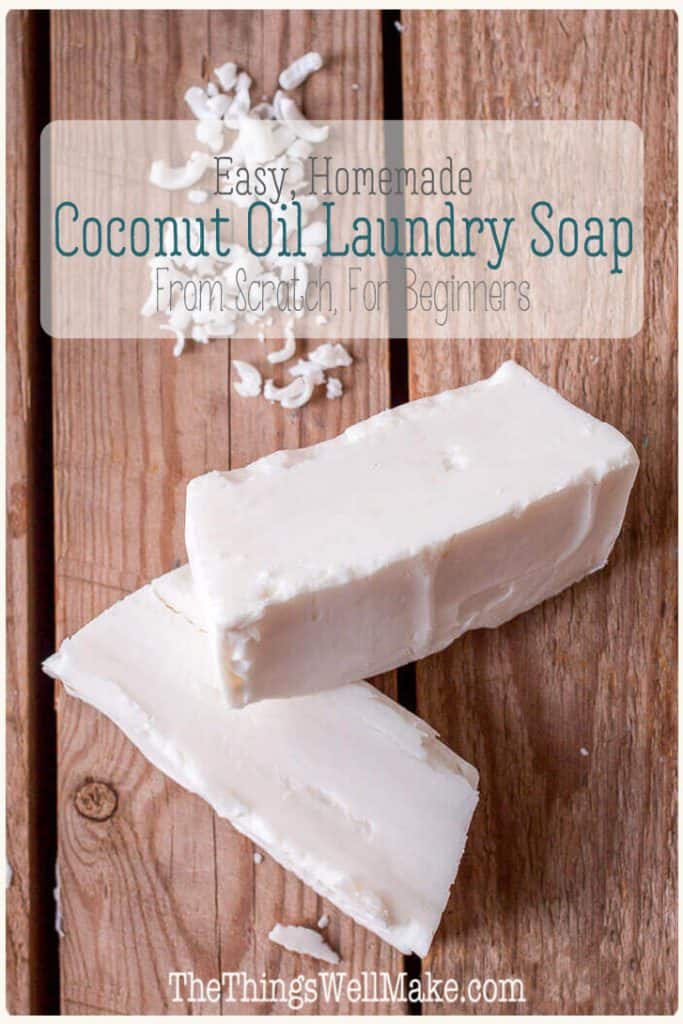 Even if you’ve never made soap before, you can quickly whip up this easy homemade laundry soap from scratch. It’s perfect for stain removal or for making soap-based laundry “detergents.”

Several years ago I showed you how to make an easy, beginner soap from scratch. It’s basically a modified Castile soap recipe that uses both olive oil and coconut oil, and it’s great for general all-purpose use.
When I formulated that recipe, I chose the oils I did because they are simple to find in most areas, and together make a pretty decent soap without needing to combine a lot of different oils. Plus, it’s a recipe that allows for a lot of working time, enough to let you customize the soap and make it fun! That soap makes a great soap for your skin because it uses a lot of olive oil, and olive oil makes a soap that is nice and conditioning for the skin, but alone it doesn’t provide a lot of lather and feels slimy to some people. It’s not a highly cleansing soap either.

Watch me make the homemade laundry soap from scratch:

Why use coconut oil in a homemade laundry soap?

I used coconut oil for this soap because coconut oil makes a very cleansing soap with a lot of lather. For skin, it can be drying when used alone, but it’s the ideal oil for soap meant for general cleaning or for laundry!
This recipe is easy to make and will make a solid bar of coconut oil soap.
If you prefer liquid soaps, I also have a recipe for a liquid coconut oil soap. Keep in mind that the liquid soap recipe uses a different type of lye that is slightly more difficult to find, and it is also a slightly more advanced recipe. While I think that even a beginner should be able to make it, I think it’s probably a better idea to make a bar soap at least once before you try to conquer liquid soaps. 🙂
With as simple as my beginner soap recipe is, this soap may be even easier to make! Because it uses only coconut oil, this soap reaches “trace” more quickly, and sets up almost immediately, making it ideal for beginners too! It also hardens very quickly and can be used for cleaning almost immediately.
My original beginner soap recipe, because of the olive oil in the recipe, takes longer to set. That made it an ideal soap for experimenting and adding fun colorants, scents, and exfoliants.
This recipe makes a nice hard, white bar of soap that can be used, as-is, for pre-treating stains, or grated to be used as a “powdered” homemade laundry soap. You can also use it for general cleaning around the house by either rubbing a scrubby sponge over the bars of soap or by dissolving some soap into a spray bottle. It works great for cleaning kitchens and bathrooms! I even have a bar of this soap next to my sink and use it to hand wash dishes, pots, and pans.
This recipe is specifically formulated to be used as a general cleansing soap and as a homemade laundry soap, which is why I only used coconut oil, and why it is a pretty exact recipe, one that isn’t superfatted.

Normally soaps that are meant to be used on the skin will use what is called “superfatting.” When you superfat your soap, the recipe calls for more oil than the amount needed to react with all of the lye to make soap. When superfatting a soap, some oils will be left over to help condition your skin.
In the case of a homemade laundry soap, though, you don’t really want or need any excess oils to be floating around with your laundry. Instead, the recipe is almost exact. I left the superfatting percentage between 0-1%.

Tips and Safety precautions for making soap for the first time:

Before making soap for the first time, you should review the main safety precautions…

If you’re new to making soap, you probably won’t have soap molds sitting around the house. You’ll be happy to know that you can repurpose a lot of materials that you likely already have to use as soap molds. My favorite mold for making bars of soap is a silicone loaf pan, but I’ve used everything from plastic Tupperware type containers to PVC pipes (You can see how I used the PVC pipe in my peppermint “candy” soap post). Silicone muffin tins made the perfect size “puck” for my homemade shaving soap. Some people even repurpose food containers like milk cartons to use as soap molds!

Even if you’ve never made soap before, you can quickly whip up this easy homemade laundry soap from scratch. It’s perfect for beginners!I use a silicone loaf pan for this recipe and cut it into 6-7 bars.
4.58 from 7 votes
Print Rate
Prep time: 10 minutes
mixing: 10 minutes
Total time: 30 minutes
Servings: 700 g of soap, more or less
Author: Tracy Ariza, DDS

How to use your homemade laundry soap

Once you’ve made your homemade laundry soap, you are probably wondering how to use it.

This homemade laundry soap can be cut into bars and used to help get stains out of clothing. It’s great for pretreating stains, hand-washing clothes, and can also be used for general cleaning all around the house.

I have a bar of this soap next to my kitchen sink and run my scrubby sponge over it to use it for cleaning dishes and the kitchen counter.

For treating stains, I wet the stain slightly, and then rub the soap into it, creating a lather.

Using it grated as a homemade Laundry “detergent”

If you want to use it to machine wash clothing, I generally find that the easiest way to use it is to grate the soap within the first days after having made it. To make sure it dissolves well when used, it’s best to finely grate it. You can even pulse it is a food processor to make more of a fine powder.

When I first made this soap and took the pictures, I grated it to resemble the laundry soaps that are normally sold in flakes here in Spain. Lately, though, I grind it into a finer powder to make sure it will dissolve well in the machine. I didn’t notice any problems before, but I figured it’s best to err on the side of caution.

Once grated, you can use it in your washing machine, in the laundry compartment directly, or dissolve it and use it as you would a liquid laundry detergent.

I rarely measure out how much I use, and probably use around 1 Tbsp. of the soap in my front loading washing machine, but I have found some general guidelines on other commercially sold laundry soaps. They often recommend somewhere between 1 and 2 Tbps. of soap.

Dissolve 40g of soap flakes into 1 liter of water.

Use around 150 ml of dissolved soap in each wash.

At the beginning of last year, I published a guest post from a small cleaning business owner with her recipe for a homemade laundry detergent. Her recipe used a combination of baking soda, washing soda, borax, and castile soap.

At the time, I tried her recipe because I didn’t want to post something on my blog that I hadn’t tested out myself, and I was overall happy using her recipe.

Here in Spain, it isn’t very easy to find borax, though, and when I had used up my mixture, I decided to try to make my own mix instead. (I love to experiment.) My thought was that using baking soda and washing soda was probably redundant and unnecessary, so I left out the baking soda, and I also decided to leave the borax out.

I ended up mixing together laundry soap flakes in around a 50%/50% mixture with washing soda. I used that mixture for months, once again without problems.

Since then, though, I received a comment on the other recipe about how using too many alkalizing agents could be bad for your laundry…
“…extensive tests were done using reflectometry and stretching showing that this washing dulled fabrics and wore them out faster, so alkali-heavy laundry detergents were considered so cheap and inferior, “borax” came to be a slang term for cheap goods in general. The good detergents were those made mostly of soap, with only a pinch of alkali — and a moderately-alkaline sodium silicate (as used in Rinso and Persil) was better than washing soda or borax.”
I found the comment quite interesting, and once again lowered the amount of alkalizing agents that I used when washing with soap. His suggestion was:
“If you want to make your own soap-based laundry detergent, and you don’t have access to a better “builder” than borax or washing soda, then if you’re going by cups, use NO MORE THAN 1 cup of borax OR washing soda for every 4 cups of grated soap (preferably all-coconut or high-coconut).”
While I hadn’t noticed any excessive wear and tear on my clothing, I did take his suggestion to heart, and I now only use around 1 cup of washing soda for every 4 cups of my homemade coconut oil laundry soap. I also add a couple of drops of lavender essential oil to the laundry compartment with the soap when washing. I wouldn’t have thought that it would leave the clothes with a nice scent, but the essential oil does leave a mild fragrance behind. I love it!

I haven’t really noticed much of a difference either way. If you experiment with the ratios, I’d love to hear your comments! 🙂

Should you be using soap-based laundry detergents?

It has since been drawn to my attention that in areas with hard water, soap scum can build up from using excessive amounts of soap. Some people claim that they notice a buildup of soap on their clothes (making them look dingy) and, perhaps, even their machine. I have a water softener installed at home because of the extremely hard water in my area and haven’t had any issues with this myself. (I have even tried “stripping” clothes washed with this soap, and haven’t noticed a difference between those and other newer clothes not washed in the soap.) In any case, it may be best to use caution, especially if you have hard water, and either use less soap, or switch to a surfactant based detergent if you start to notice a buildup on clothing or parts of your machine.

I have since published a post for how to make your own no-soap, surfactant based laundry detergent! I think it’s the ideal solution for most people, and it’s what I’ve been using the last few months. I still make bars of this laundry soap for pre-treating stains and hand-washing dishes, but I no longer grate it and use it as a laundry “detergent.”