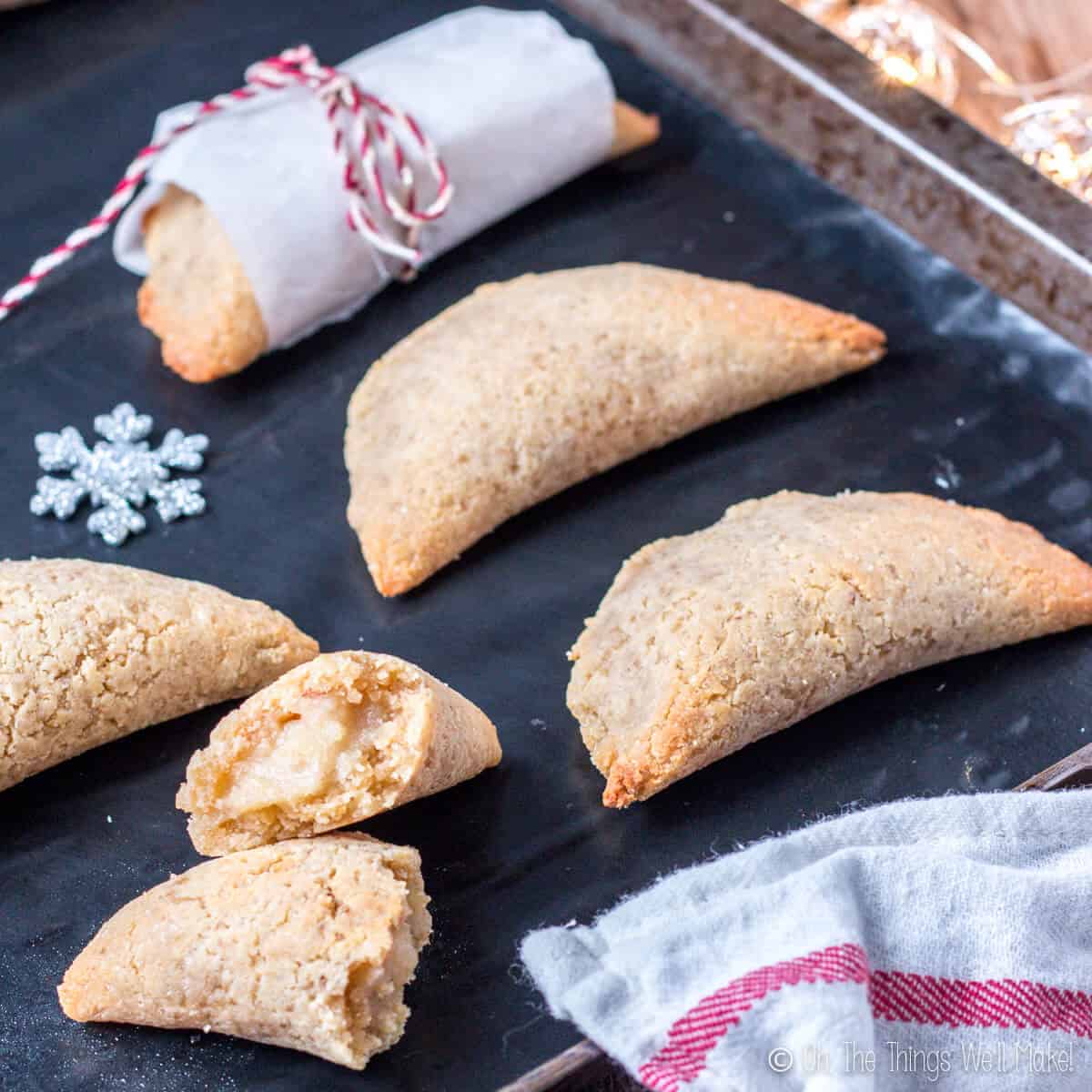 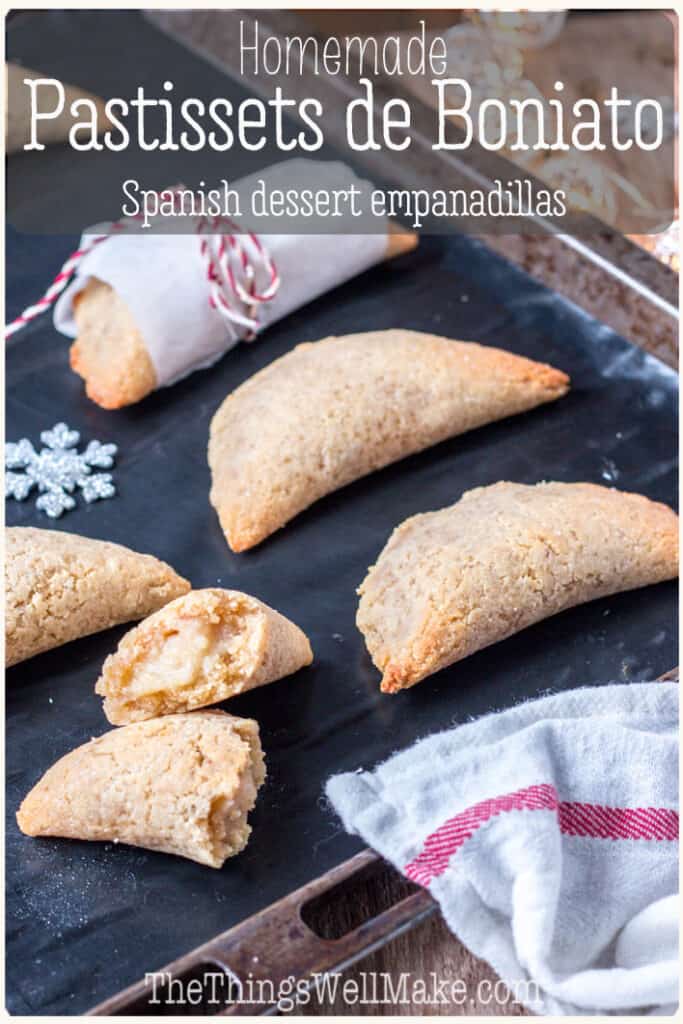 The most popular Spanish Christmas pastry in my area of Spain, pastissets are a type of empanadilla that is often filled with a sweet boniato (white sweet potato) filling.

Yesterday, I shared with you how to make dulce de boniato, a Spanish pastry filling that is popular at Christmas time. It is made with boniato, a white sweet potato.

Today I am going to share a recipe for a grain-free almond pastry dough that can be used for making pastissets, the most popular Christmas pastries in my area of Spain. Pastissets are a type of sweet empanada often filled with dulce de boniato. They are also referred to as pastelitos or empanadillas dulces when speaking in Spanish. The term “pastissets” is actually the Valencian and Catalonian name for them.

Wheat flour is probably more commonly used when making the pastries because it is a lot cheaper and a little bit easier to make. The almond flour-based pastry is more delicate, so you have to be more careful when forming your pastries, but it is definitely worth the extra effort.

Once they are made, the results are spectacular. The pastry itself is reminiscent of marzipan, which combines perfectly with the sweet boniato filling.

This recipe only uses a few simple ingredients. The pastry is mainly made from almond flour, an egg, sugar, and honey. You can also add a bit of cinnamon for flavor.

This recipe is an adaptation of a recipe from a friend of mine, Victoria Monera, who also has two blogs of her own. If you are looking to practice your Spanish, they might be of interest to you. She shares her recipe for the pastry dough on a blog filled with recipes, stories, and other articles. Her other blog, españolextranjeros.com, is filled with grammar exercises for those who are either studying or teaching Spanish.

My friend’s recipe uses a kilogram of almond flour. That reflects how most people here make pastissets. They get together with family and friends and make a large batch so that they can share with others. I decided to quarter her recipe to make it more practical for making in one home. When quartered, this recipe makes 6 large pastissets.

Apart from the amount used, I also changed the amount of sugar and the type of sugar used. The original recipe calls for white table sugar, but I replaced it with coconut sugar and honey. The honey adds flavor and helps make a more easily moldable dough.

You can use whatever sugar you prefer, though! Lighter sugars will result in lighter colored pastries!

Making the dough for pastissets is simple. Combine all of the ingredients together in a medium to large bowl, mixing them well to form a dough. This step is probably easiest using clean hands to work the dough together.

The dough may be slightly sticky at first, but should become workable as you incorporate all of the flour. If you are using a large egg and find that the moisture of the egg and honey may make the dough too sticky, adding some more almond flour should help you fix it.

Once you have a workable dough, divide it into six equal parts. Roll each of the parts into a ball. I find it’s easiest to work the dough if it has been chilled first, but you can make them right away, if you like. (If you are having a hard time working with the dough, though, consider placing it in the fridge for a while before continuing.

Once you have the balls of dough ready, press them into flat circles that are about half a centimeter thick (just under a quarter of an inch). Pressing the dough on parchment or wax paper can help flatten the dough without it sticking.

Scoop some filling into the center of the dough circle and fold the pastry circle in half over the filling. Use the paper to help fold the dough over onto itself. Seal the edges shut.

Place the sealed pastissets onto a baking sheet lined with parchment paper.

Once you’ve filled all of the pastries, bake them until they are a light golden brown.

If you aren’t a fan of boniato, you can fill these almond-based pastries with other sweet fillings. Common pastisset fillings used here are almond paste and “cabello de angel,” a sweet filling made with cooked Siam pumpkin.

That said, you can really let your imagination run wild. Why not try some of your favorite pie fillings. I bet an apple filling would be delicious. (I’d try pre-cooking anything you plan on using, though.)

Pastissets are usually served after meals around Christmas time. They are often accompanied by other typical Spanish Christmas treats like mantecados, polvorones, and turrón. (I have recipes for both the soft turrón de Jijona and the hard turrón de Alicante.) 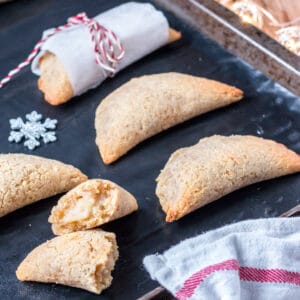 For the pastry dough

These can be made with any sugar of choice. White sugar will give lighter colored pastries. The honey can be substituted with either maple syrup or more sugar.

This post was originally posted on December 11, 2015. It was rewritten and republished in December of 2020, adding new photos, video, and clearer instructions.