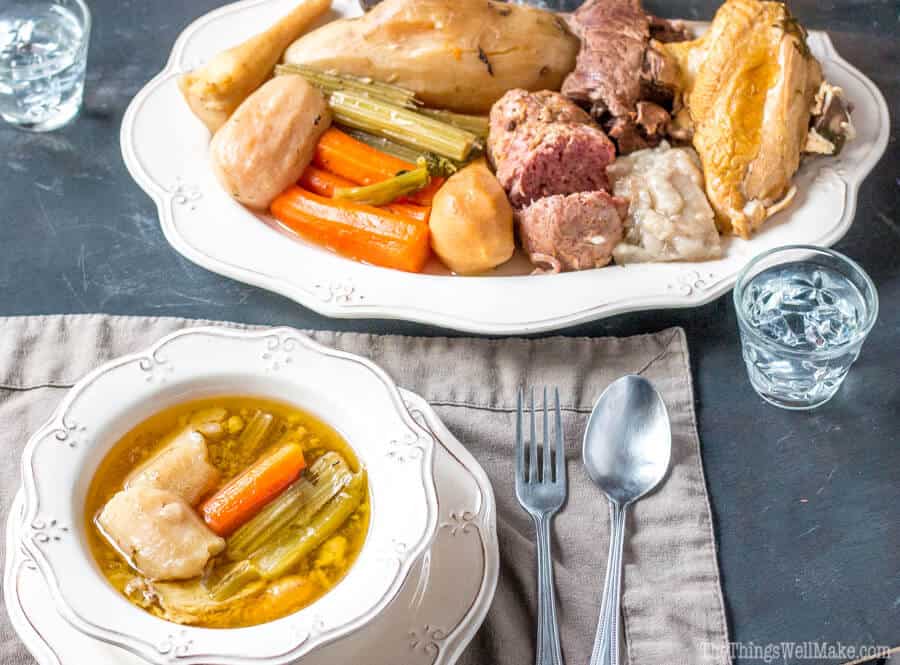 Well balanced and nourishing, this Valencian puchero recipe will show you how to make a simple yet hearty Spanish stew that is sure to warm you up on a cold winter’s day.

When it comes to healthy Spanish comfort food, puchero is about as good as it gets. Puchero is a type of Spanish stew that varies from region to region and, of course, from house to house.

It is basically a type of “cocido,” which is a stew made from various meats, bones, and vegetables which may also include legumes and potatoes. Where in some regions the focus is on garbanzos and sausages, here in the Valencian community more focus is placed on the variety of meats and vegetables.

A basic puchero consists of broth obtained from a variety of meats and vegetables which is usually served first either alone or with rice or fine pasta noodles as a soup. The broth is followed by a large platter with all of the meat and vegetables which is placed in the center of the table and from which everybody can serve themselves.

It is meant to be a simple yet complete meal that brings the entire family together.

It’s hard to formulate a puchero recipe because it does vary so much. Even in the Valencian Community, puchero can vary from house to house, but you can buy pre-prepared trays of meats and vegetables at most supermarkets marked that they are meant for puchero, which gives you a fairly good idea of what most people use.

The basic puchero usually uses beef bones (with a bit of meat still attached) mixed with some pork bones, a piece of beef for stewing, a bit of chicken or “hen” meat or both. It is said that hens, after they have finished laying eggs, have a much less tender meat which is perfect for giving flavor to stews like puchero. They also include a square of “tocino” also known as pork fatback, and usually add in a “pilota” or two (or three). The pilota is basically a big, oval meatball, the size of an ostrich egg, made with ground pork; it is cooked along with all of the other meat and vegetables. Here you can buy them premade and ready to cook in your puchero, but you can also easily make your own just as you would any other type of meatballs. I’ll probably eventually share a recipe here on the blog. Some people add in some sausages such as blood sausage, but I don’t.

As for the vegetables, puchero usually uses a mix of green vegetables and root veggies like parsnips, turnips, rutabagas, and carrots. They add in some celery and leeks for flavoring the broth, and some “cardos” or “pencas” which are the tough leaf stalks of the artichoke thistle plant; those are my favorite greens for eating along with the beef. Usually potatoes and boniato are added in, along with some garbanzos, but I usually just use the boniato which I happen to love. That keeps my puchero paleo and just the way I like it! If you can’t find boniato, you can use any type of sweet potato instead!

I love making puchero because it is such a hearty, well balanced and nourishing meal. I also love that despite the fact that the idea of “low fat” being healhty has taken force here in Spain, most people aren’t afraid of the fat from the tocino (pork fatback) and they mash it into the potatoes or boniato the way many Americans mash in some butter.

Puchero is a great meal for holiday get togethers, which makes it perfect for Christmas dinner. We usually eat it here on Christmas day accompanied by the leftovers from Christmas Eve.

Another interesting thing to note is that most people make more broth than they will need and save it for making “arroz al horno” afterwards. Those who throw garbanzos into the mix also can save some of those for their rice the next day. 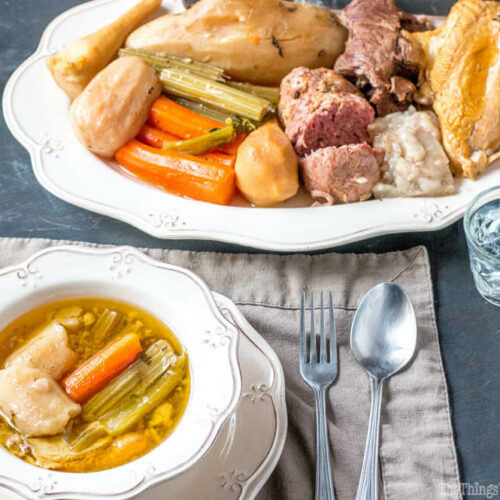 Well balanced and nourishing, this Valencian puchero recipe will show you how to make a simple yet hearty Spanish stew that is sure to warm you up on a cold winter’s day.
4.80 from 5 votes
Print Rate
Prep Time: 15 minutes
Cook Time: 3 hours
Total Time: 3 hours 15 minutes
Author: Tracy Ariza, DDS

Most people here use artificial yellow coloring to make their puchero an unnatural shade of yellow. In fact, they sell jars of yellow coloring powder in the spice section for that very purpose. I suppose the strange tradition started when they realized that saffron was expensive and decided to switch some or all of it out in their paellas and other rice dishes. Unfortunately they tend to go overboard with it. I did not use any artificial coloring in my pictures above, and I see no need to add in any more color; I think it’s beautiful as it is. Just having used a mix of vegetables and a healthy corral chicken in my stew was enough to turn it a natural shade of yellow on its own. I didn’t even use saffron, but if you would like to brighten up the color of your puchero, that is what I would recommend you use.
Course Main Dish, Soups
Cuisine Spanish
Other Diets Dairy free, Gluten free, Low Carb, Paleo
Tried this recipe? Tag me today!Mention @thethingswellmake or tag #thethingswellmake!
Category: Lunch & Dinner, Soups & Salads, Spanish Food & Recipes