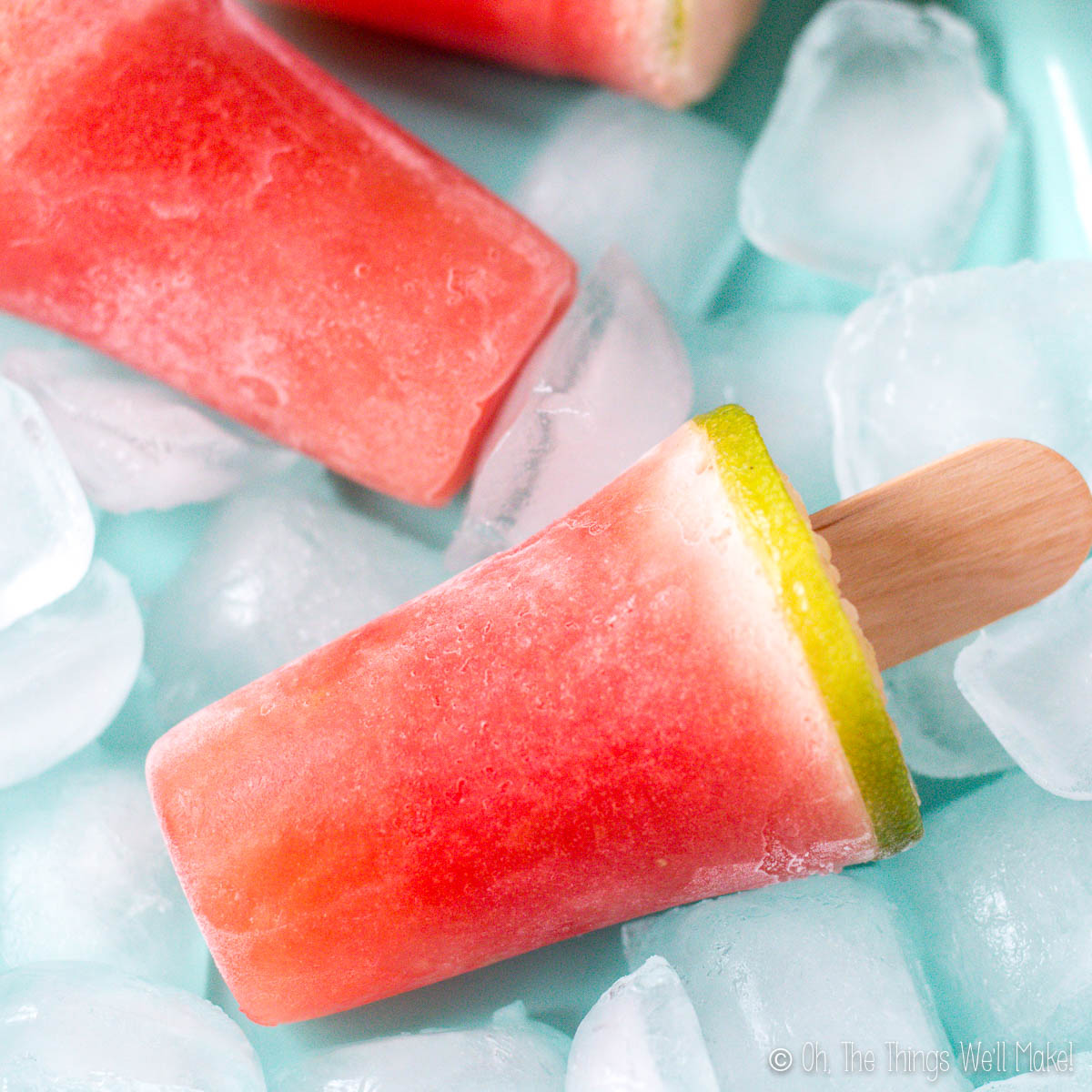 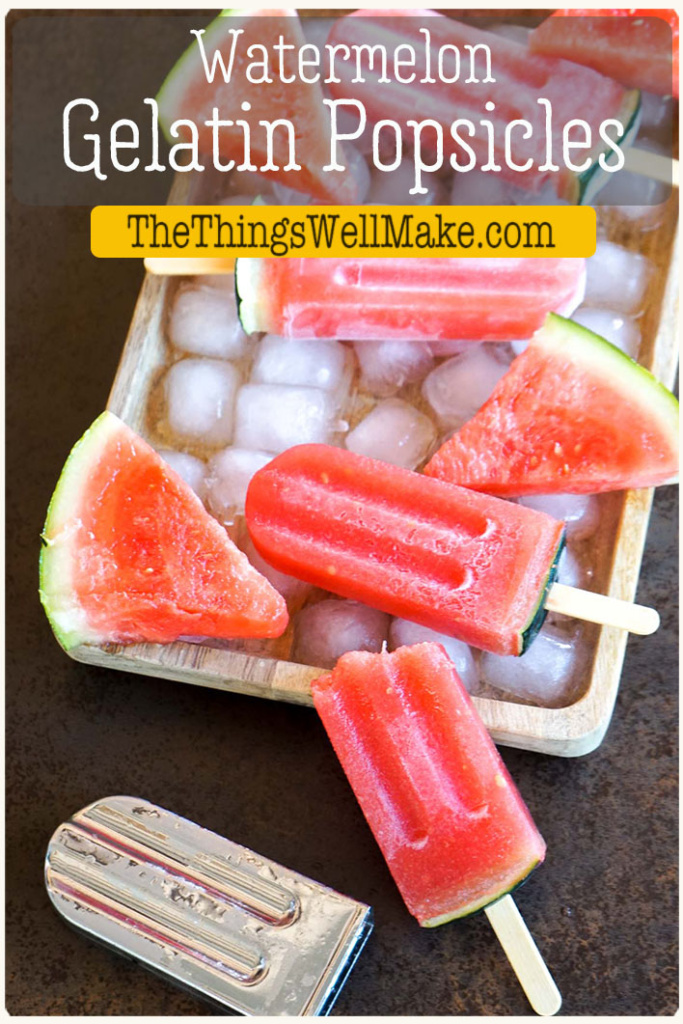 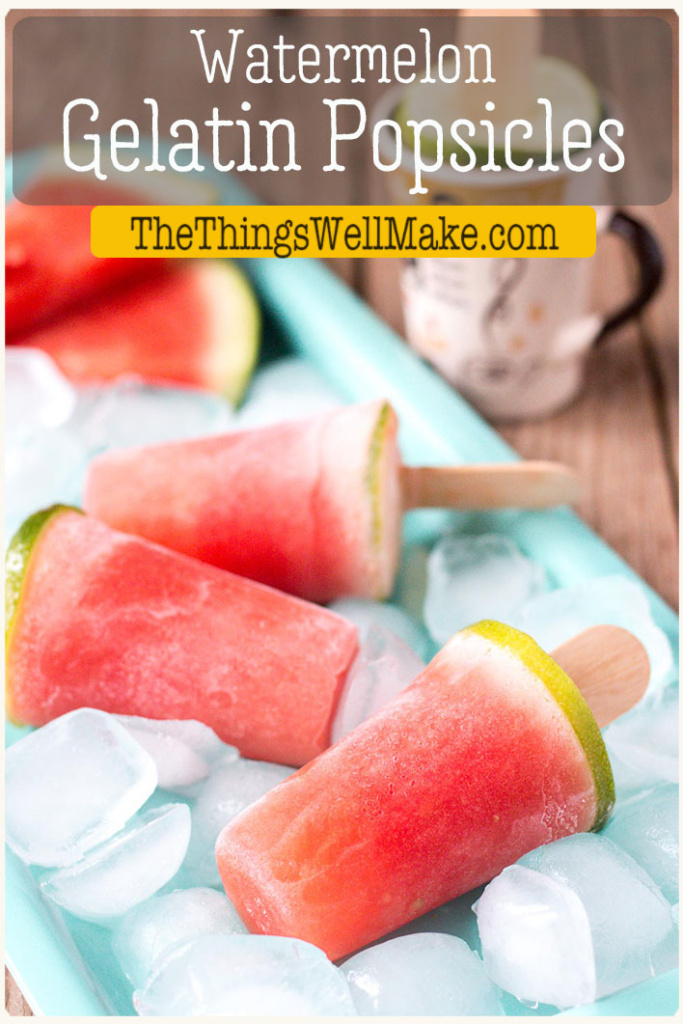 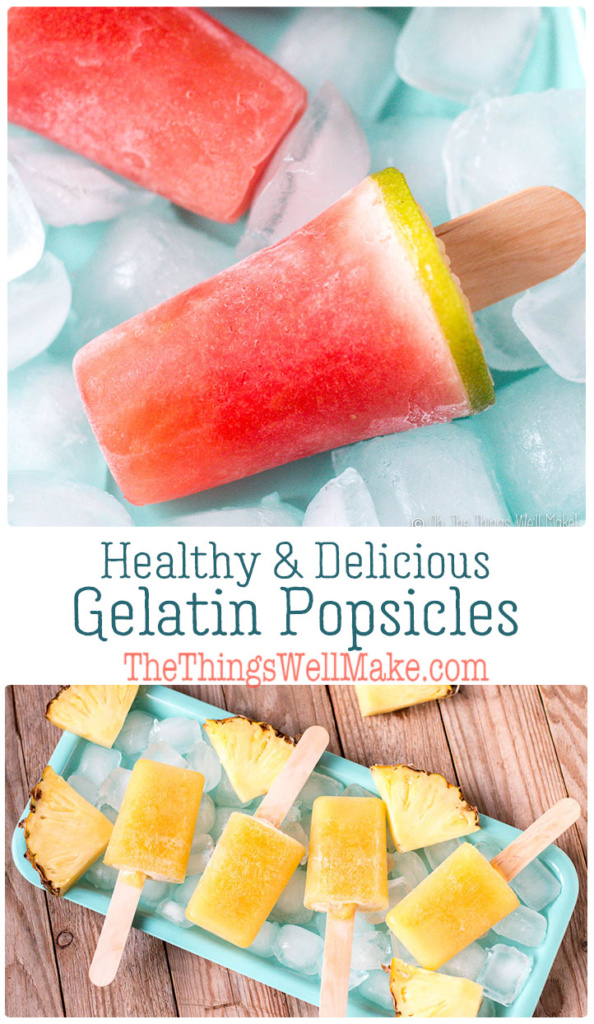 These delicious, healthy watermelon gelatin popsicles are fun to make and provide a healthy dose of collagen and protein. Plus, they have a great texture and don’t drip!

Here on the blog, I’ve already shown you how to make a healthy gelatin dessert using fresh fruit and fruit juices. While that is already delicious, I’ve decided to take them one step further and make them into fun gelatin popsicles!

When I was a kid, the Jell-O brand made what was known as “Jell-O Gelatin Pops.” They appeared in the mid 80’s, and, to my dismay, weren’t around for very long. I used to love them. Despite the fact that they were marketed as being made with real fruit, I imagine they also included some artificial flavors and/or colors. Even if not, they were a bit too sweet.

When they stopped selling them, I resorted to making my own. At the time, I was convinced that fat and calories were “the enemy”, so I made my own “healthy” version with Jello-O Lite which is sweetened with artificial sweeteners. (It also includes a dose of artificial colors and flavorings.)

Since then, I’ve adapted the recipe to make a real-food, healthier version of one of my favorite childhood treats!

You absolutely need to try these…

Gelatin changes the consistency of the popsicle in a way that I can’t really describe. Some people describe them as “creamy,” but they aren’t really creamy in the same way that ice cream is. On the other hand, they are smoother and softer than an icy popsicle made from juice or fruit puree alone.

If you use a healthy gelatin such as gelatin obtained from grass-fed, humanely raised animals, then you are also adding a healthy dose of collagen and protein to the popsicles.

Not only is the texture great, but I love that they don’t drip in the same way as other popsicles! That makes them perfect for kids. As they start to melt, rather than turn into juice that drips off the popsicle, they start turning into gelatin on a stick!

These popsicles can be made with only two ingredients: watermelon and gelatin.

You could also sweeten this with some sugar or another sweetener, but I find that with watermelon, the popsicles are sweet enough without it.

First, cube the watermelon and liquefy it in a blender.

Once the watermelon has been liquefied, you can begin to soften the gelatin in some of the watermelon juice. Softening the gelatin will help it expand and more easily dissolve, meaning you won’t need to cook it as long to dissolve the gelatin. That helps keep the fresh watermelon flavor in the finished popsicles!

Once the gelatin has bloomed (softened and swelled), you can mix it with more of the watermelon juice and cook it in a saucepan over low heat while stirring until the gelatin is dissolved.

Remove the pan from the heat and stir in the remaining watermelon juice to help cool it. Then, pour it into molds.

To get super cute-looking popsicles, adding some green to the bottom of the popsicle makes it look like a slice of watermelon.

The first time I made these, I used round coffee cups as my molds and used lime slices to add a touch of green to the popsicles. To add some white between the watermelon and the “rind,” I poured a dash of coconut milk on top of the watermelon gelatin before adding the lime slice and freezing. (If you do it after allowing the watermelon mixture to gel first, you’ll end up with layers rather than an ombre look like mine.)

While I think they turned out really cute, the lime slice imparted a bitter flavor to the coconut milk layer. With that in mind, it may be smarter to add the lime slice after the popsicle has frozen, or to try my newer method.

This year, I used more classically shaped molds for my popsicles and decided to use the actual rind to hold the sticks in place. My stainless steel popsicles molds come with steel plates with holes in them for placing the sticks. I decided to replace those with pieces of watermelon rind cut to size.

As an experiment, I cut some of the rinds slightly larger than the top of the molds, and others so that they fit within the molds. I assumed that the expansion of the watermelon mixture as it froze would result in all of the popsicles turning out well.

When I use smaller pieces that fit within the molds, the rinds floated on the surface of the gelatin mixture. So, I didn’t have an issue with them falling down into the molds. As the popsicles freeze, the rinds rise up as needed.

If you’re having issues with the rinds sinking, you can place the molds in the fridge and allow the mixture to gel before adding the rinds with the sticks.

Apart from using different fruits, you can also add some cream to the mixture to make creamier popsicles. (They say that the original Jell-O popsicles were made with Cool Whip.)

Next time, I may even try adding some homemade yogurt or kefir to gelatin popsicles made with strawberry purée. I think they may taste a bit like strawberry cheesecake!

Getting the gelatin to gel

What I love most about these is their texture when made with a high concentration of gelatin. It almost reminds me of licorice, something that I have always loved, but don’t allow myself to eat very often. They are softer and less icy than fruit pops made from fruit juice or fruit purée alone.

To get that texture (and the no-drip benefit), you need the gelatin to gel.

Unfortunately, not all fresh fruits will make a purée that will gel the gelatin. Like fresh (or frozen) pineapple, some fruits have proteolytic enzymes that affect the collagen structure, which is what makes gelatin gel. They are the same enzymes that make pineapple a great natural meat tenderizer!

On the other hand, store-bought fruit juices generally gel without issues. That is because store-bought juices are usually pasteurized, and the pasteurization process breaks down the enzymes. That allows the collagen structure to form into a gelled gelatin.

If you only want to add a healthy dose of collagen and protein to your fruit popsicles, then it really doesn’t matter which fruits or juices you use and if they have been pasteurized or not. On the other hand, if you want the texture that a gelled gelatin gives the popsicles, use fruits without proteolytic enzymes that disrupt the gelling process.

To make healthy gelatin pops using other fruit juices or purees, refer to my post on making a healthy gelatin dessert for more tips and tricks on getting the various fruits and juices to gel. 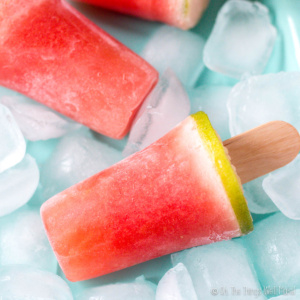