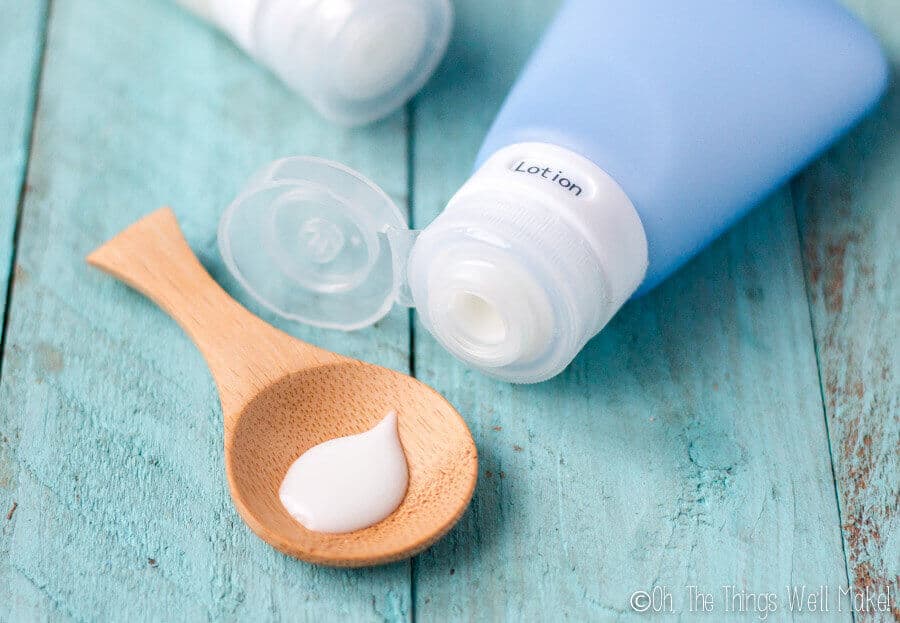 How to Make a Simple, Homemade Lotion and How to Customize it

You are here: Home / Make it Yourself / Face & Body / How to Make a Simple, Homemade Lotion and How to Customize it
Last Modified: January 9, 2018 // by Tracy Ariza, DDS // February 24, 2017 I may receive a commission if you purchase through links in this post. Learn more here.

Making a simple, basic homemade lotion is easy, once you understand the basics. I’ll tell you how to formulate your own lotion and customize it for your skin type. 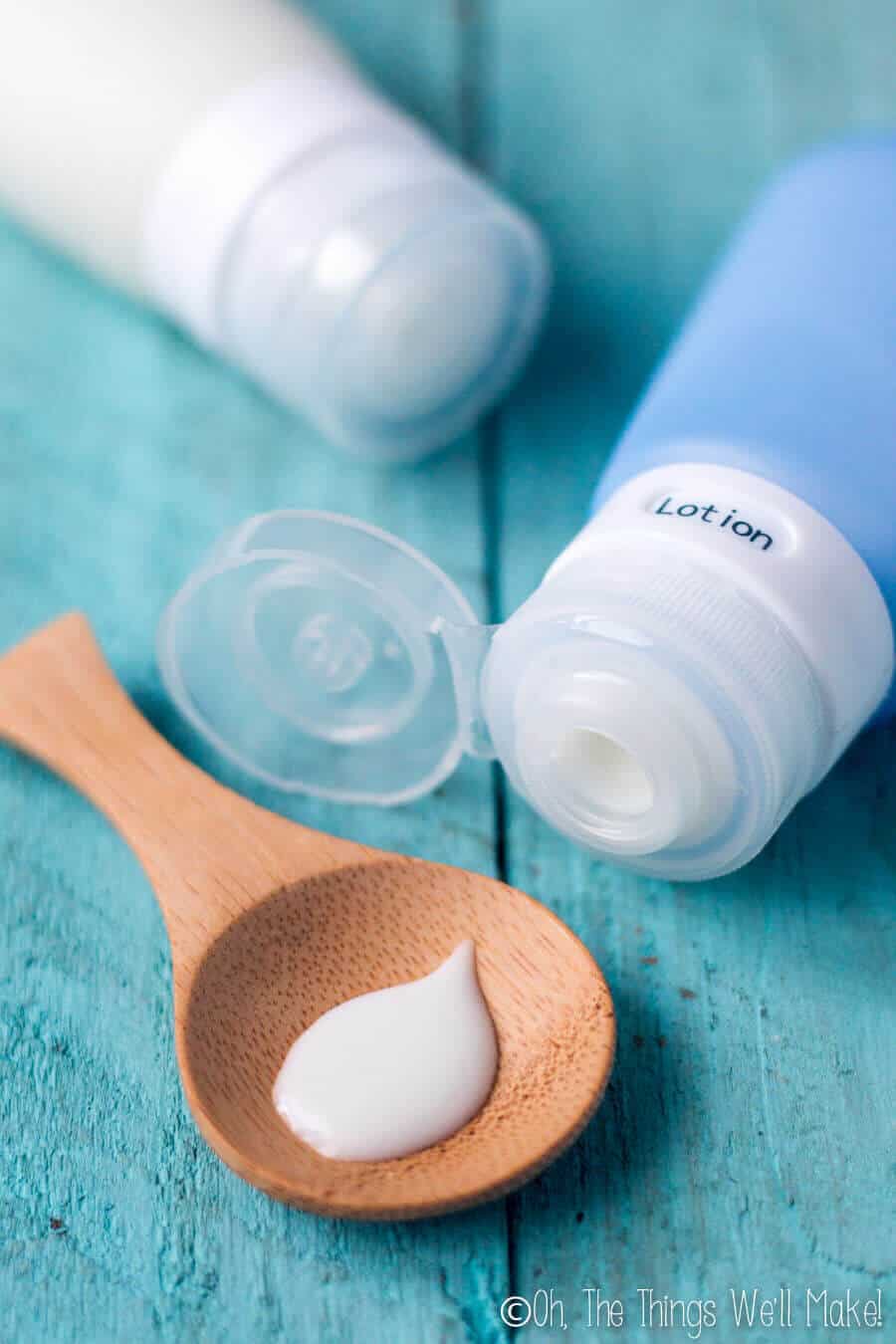 My husband ran out of his store bought roll on deodorant. While I’ve been enjoying my homemade deodorant for months and months now, my husband wasn’t quite on board with the whole DIY natural products idea. He had suffered through my trying out all sorts of homemade deodorants that either didn’t work or that used baking soda which was effective, but irritated my skin. It wasn’t until I came up with my own formula, using zinc as a deodorizer, that I finally made a deodorant that worked, and worked well, and not only does it not irritate my skin, it actually soothes it.

When I asked my husband if he wanted me to make him a new deodorant, he was skeptical about whether or not it would work. That’s when I mentioned how well mine has been working, even through the hottest days of the summer. That’s also when it dawned on him that he hasn’t had to complain about unpleasant odors in months now.

He decided to give my solid bar a try, and liked the way it worked, but had to admit to me that he prefers a roll-on type deodorant. So, I made him one. (And I’ll share that recipe here too.)

Watch how to make a homemade lotion:

How to Make a Simple, Basic, Homemade Lotion

What does all of this have to do with how to make a simple, basic, homemade lotion?

While making the roll-on deodorant, after having made the hair conditioner and a few other homemade cosmetics, I came to the realization that once you know how to make a basic homemade lotion, you’ll be able to customize the idea to make all sorts of homemade products. Why? Because they’re fundamentally the same product with slightly different ingredients.

That’s when it dawned on me, it took me forever to start making my own lotions and creams because I was intimidated and didn’t know where to start. There isn’t a lot of good information out there about how to make your own basic lotion or cream and how to customize it to suit your skincare needs!

After seeing how popular my recipe for a basic, beginner soap became, mostly because people were too intimidated by the soap recipes out there and needed a simple guide for how to begin making your own soap with ingredients that were easy to find, I realized that I needed to make beginner’s guide to making lotions and creams.

Most recipes I’ve seen out there are either intimidating with lots of (unusual) ingredients, don’t work (I tried one with beeswax that separated into liquid and oil layers), or are lacking important information like how to preserve the homemade lotion so that it is safe to use. People’s fear about how to preserve lotions is probably the main reason that most bloggers stick to making body butters rather than lotions. (More about that in a second.)

What are the Main components of a simple, homemade lotion?

The main component of lotion, which makes it differ from a body butter, is water. When you are buying all small tub of cream or a bottle of lotion, keep that in mind. In most cases over half of that container is really just water!

Once you introduce water into a product, you are making way for bacteria and mold formation, so you have to worry about using a preservative of some sort. That’s another reason that a lot of bloggers fear making lotions. I’ll get into making safe lotions in just a sec…

Why would you use water, then?

I personally hate body butters. Even if you whip up coconut butter into a fluffy, smooth body butter of sorts, it still goes on feeling greasy. Most body butters just don’t have that silky feeling that a lotion does when you put it on. They don’t absorb into your skin in the same way either. Plus, they are a lot more expensive to make because 100% of your ingredients are oils and other active ingredients.

There are also lots of beneficial ingredients that you may want to add to your preparations that are water soluble. I add things like rose water, witch hazel, aloe juice and gel, and hyaluronic acid to my creams and lotions as part of the aqueous phase.

Not only that, once you learn how to make a basic lotion which emulsifies water with oils, you’ll be able to make all sorts of things like hair conditioners that you can’t make with just oils alone.

Oils and “butters” add nutrients and antioxidants to your lotions and creams. Different oils have different properties which can be beneficial for different types of skin.

Despite what many believe, not all oils provoke acne or are bad for acne prone skin. Some oils can actually help reduce acne and the inflammation caused by it by balancing the oils in your skin. Other oils are especially good for healing dry skin, clearing up eczema, and reducing the appearance of fine lines and wrinkles.

Some day I’ll write a post about my favorite oils and their properties for all different types of applications. I’m using oils in everything from soap to face serums.

Oil and water don’t mix well, so in order to get them to come together into a stable product, you need some sort of emulsifier or emulsifying wax. Emulsifiers have both a water loving and oil loving component to them, so they work as sort of a “glue” to keep both the oil and aqueous phases of your lotion together.

Because most of the emulsifiers are called emulsifying waxes, many people think that all waxes will work as emulsifiers for making lotions. Unfortunately, waxes like beeswax, candelilla wax or carnauba wax, can’t be used as the emulsifier for making a lotion. (I found that out the hard way when I made a mess trying to make my first lotion with beeswax years ago.)

There are lots of different emulsifiers and emulsifying waxes on the market, each with their own properties. Some will give a different texture or weight to your lotions, others are used more for hair conditioners and similar products. Most emulsifiers are added to the oil phase of a lotion, but there are exceptions. Depending upon the emulsifier, you may need more or less for emulsification to take place or to get the right texture. When using a different emulsifier in a recipe, it’s a good idea to check on its specifications and see how they differ from the emulsifier being used.

Let me give you an example of some emulsifiers I have bought and tested:

Just because waxes like beeswax, carnauba wax, and candelilla wax don’t make good emulsifiers doesn’t mean that they aren’t suitable for homemade cosmetics. Waxes will help thicken up your emulsion, and add staying power to certain cosmetics. They also help create a barrier that keeps moisture in your skin. I especially love waxes for making a simple homemade lip balm, a natural  root concealer stick for your hair, or even a solid perfume.

Preservatives are the “scary,” “non-natural” part of making lotions and other emulsions.

Once you add water to your product, it become lighter and melts into your skin better, but it also becomes a breeding ground for bacteria and molds. There are people who make their own homemade lotions without preservatives thinking they will use them quickly enough to not have any problems. I personally wouldn’t risk it because even if you keep your preservative-free homemade lotion in the fridge, it will likely be filled with mold and bacteria within a couple of weeks.

I much prefer to use a mild preservative that will allow me to have a safe product for several months.

There are natural preservatives on the market that will give your finished product a shelf life of around 2-3 months, on average, if you make your lotion in hygienic conditions, even when you store your lotion outside of the fridge.

While you should use a preservative, you can choose to avoid the harsher chemical preservatives that most store bought products use to give extended shelf lives that will allow their product to last for months and months on end.

Here are some “natural,” mild preservatives:

Can’t I preserve the lotion with essential oils and vitamin E?

Some people like to say that they are using essential oils, Vitamin E, grapefruit seed extract, potassium sorbate, or even coconut oil as natural preservatives.

While it is true that coconut oil and some essential oils can have antibacterial and antifungal properties, they alone aren’t enough to preserve any type of homemade lotion. Vitamin E and grapefruit seed extract are high in antioxidants, and can help slow rancidity in the oils in your lotions. They won’t prevent the formation of bacteria and mold, though. 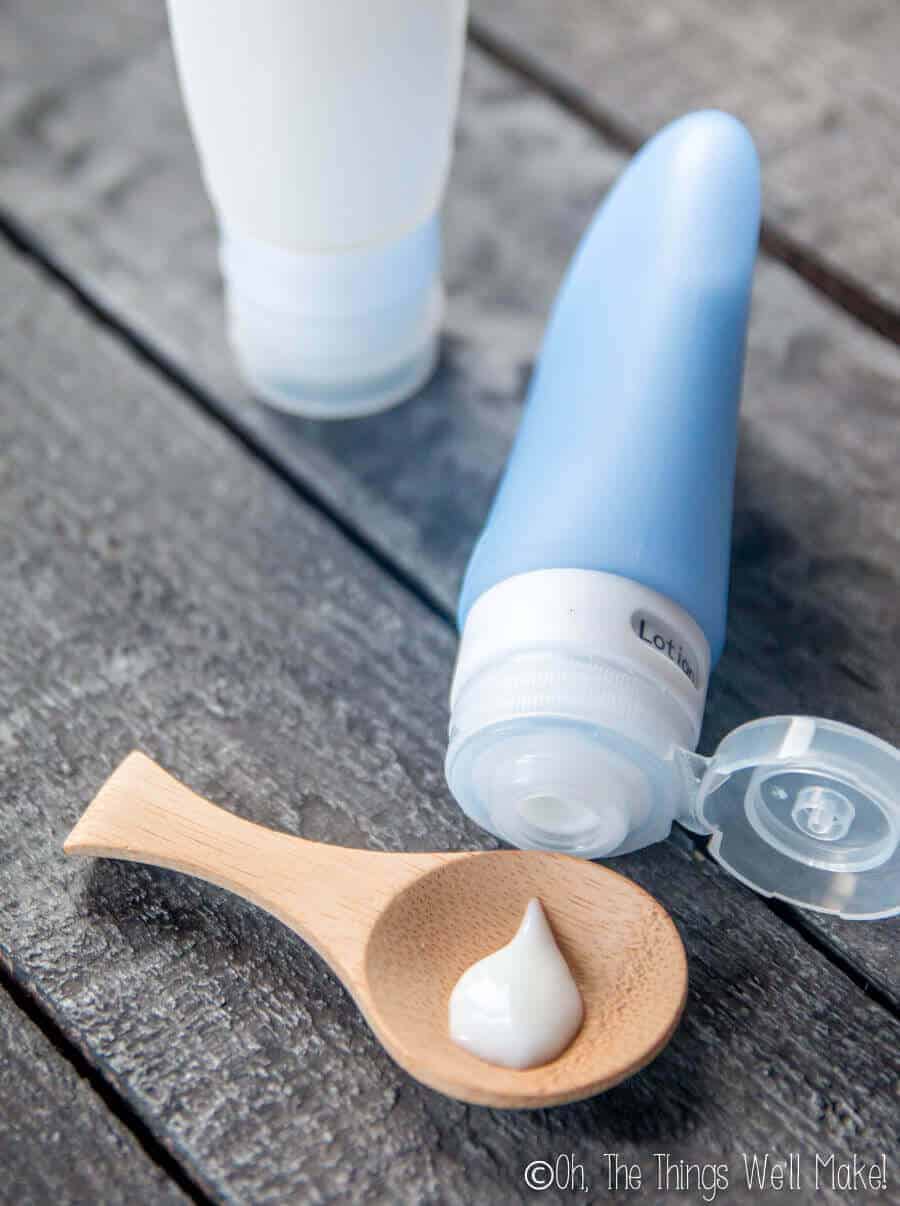 How to Make a Simple, Basic, Homemade Lotion 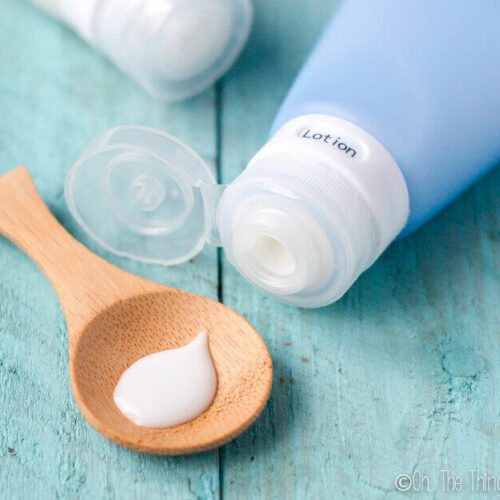 How to Make a Simple, Basic, Homemade Lotion and Customize it for Your Skin Type

Making a simple, basic homemade lotion is easy, once you understand the basics. Change up the oils to adapt it to your skin type.
4.6 from 20 votes
Print Rate
Total time: 16 minutes
Servings: 100 ml (More or less)
Author: Tracy Ariza, DDS

How to Clip a Chicken’s Wings to Prevent Flying Away
Next Post: How to Make Homemade Limoncello, Limecello, and Mandarinecello (2 Ways)