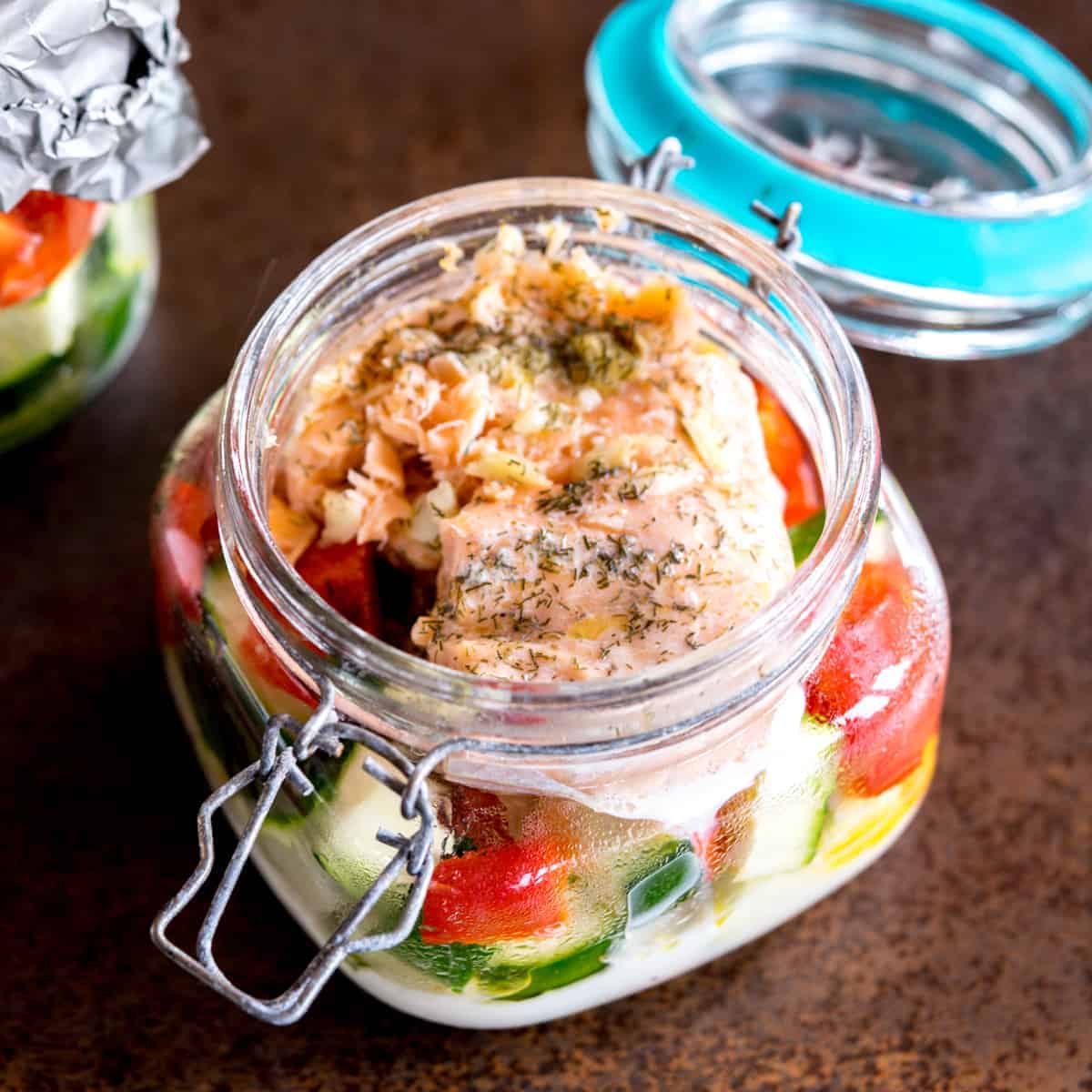 How to Cook Salmon in the Dishwasher 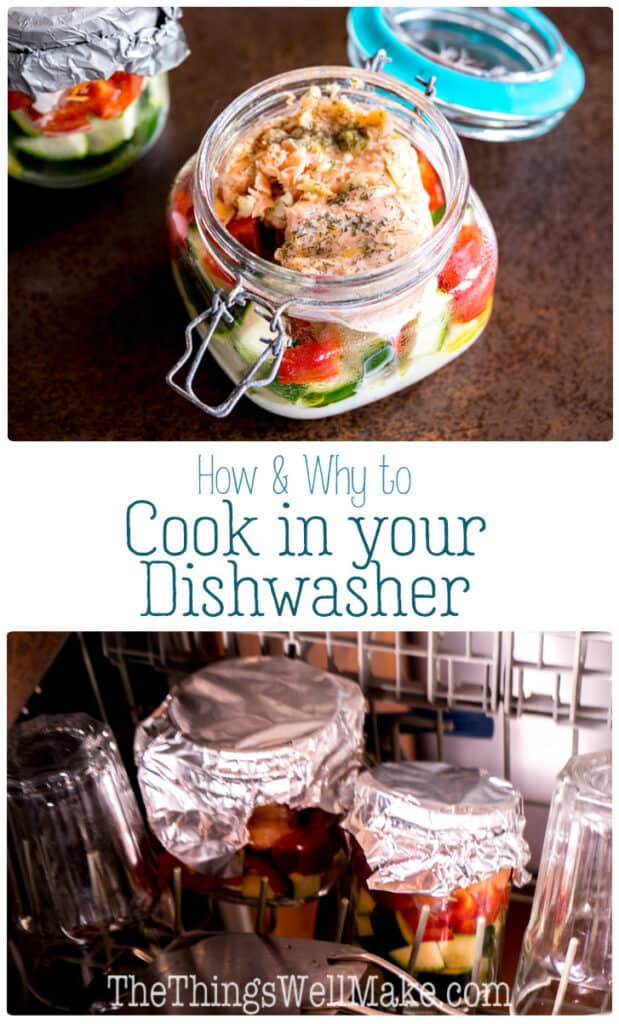 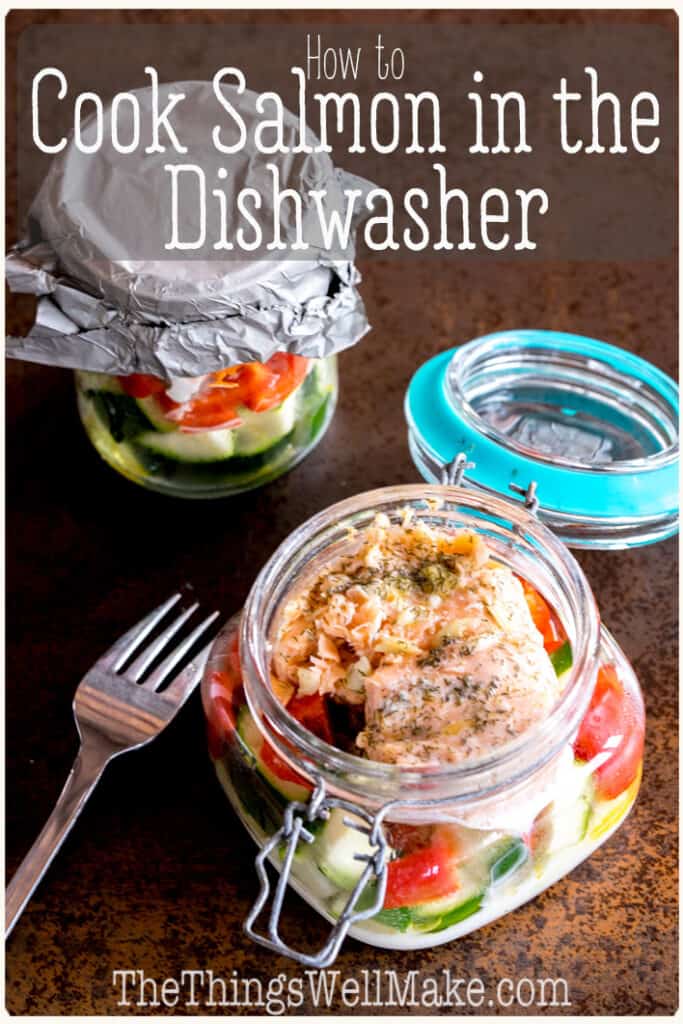 Save energy by cooking salmon in the dishwasher while you clean your dishes. Not only is it a sustainable way to cook, but it also makes a deliciously flaky and moist fish.

Several years ago, a dishwasher commercial here in Spain caught my eye. An Italian blogger showed off her method of cooking in the dishwasher, all while cleaning dishes. She even wrote a whole cookbook of recipes for dishwasher cooking.

Is it possible to cook in the dishwasher?

Seeing as I have a fondness for the unusual, and I also like to try to live as sustainably as possible, I figured I may as well give it a try.

With that in mind, one day, a couple of hours before lunchtime, after noticing that I still needed to wash my dishes, I decided to give it a try. Armed with a fillet of hake that my husband had fished the day before, I made my first attempt at dishwasher cooking.

And it worked. So, yes, you can definitely cook in the dishwasher. (I’ll elaborate in a second.) ?

What can be cooked in the dishwasher?

Why not try out some of my other seafood recipes?

Is it safe to cook in the dishwasher?

When the Mythbusters, together with Alton Brown, decided to take on the myth of if one could cook lasagna in the dishwasher, they tested the internal temperature with a temperature probe placed inside the dishwasher. Alton Brown was hoping for a heat of 140ºF for safety. Their dishwasher reached around 136º instead.

They proceeded anyway, and were actually quite surprised at how well their lasagna turned out. Of course, it lacked the browned top that would be achieved under a grill, but otherwise, it was delicious.

Keep in mind that for lasagna, the meat and sausage were pre-browned in a pan as they normally would be.

I’d suggest, for safety reasons, to stick with foods that don’t necessarily need to be completely cooked or that cook quickly to be safe to eat. Vegetables and pasta work well, as do fish recipes.

You’ll also want to make sure that you use a cycle that heats up adequately. Avoid especially light cycles. Some dishwashers have a “sanitize” cycle that heats to over 140º. Those may prove to be the best cycles for cooking.

How to keep the soapy water out

Most recipes I’ve seen online cooked fish or pasta wrapped in “heavy duty” aluminum foil. Many suggested cooking in the top part of the dishwasher without soap. Their premise was that fish cooked in the dishwasher tasted better than that cooked using other methods.

While I’ve never tried using just foil myself, many people have successfully used it for cooking in the dishwasher.

I, on the other hand, usually use jars with rubber gasket seals. Using those types of jars, I’ve never had a problem with soapy water getting inside. I have also used other types of canning jars without issues.

That said, you can choose to cover the lid with aluminum foil, just to be safe.

My first attempt at dishwasher cooking

I decided to go all-in and rolled my fish fillet up in a jar with an airtight lid. That’s what the Italian blogger used. It also seemed like the most sustainable cooking option. The jar I used had a rubber gasket with a pressure clamped lid, but would it be enough?

That first day, I cooked the fish with butter, garlic, and herbs. I minced the garlic, and sprinkled it on the fish along with some lemon thyme and salt. I also added few pieces of butter inside the fish before placing it in the jar.

I kept the “recipe” simple. After sealing it, I placed the jar into the dishwasher along with my dirty dishes. Then I crossed my fingers and started the wash cycle.

Halfway through the cycle, I peeked in…

I had my doubts…

Not only did the fish still look raw, but the butter hadn’t even melted yet. Plus, there seemed to be the tiniest bit of water in the bottom of my jar. I began to think I was going to end up with raw, soapy, fish for lunch.

I guess my dishwasher does most of its heating towards the end of the cycle, though. When finished, I could see that the butter had melted (at least). I still wasn’t sure about the fish, though.

In the end, it was delicious!

Cooking in the dishwasher resulted in a very flaky and perfectly cooked moist, flavorful fish!

Having rolled up the fish to cook it, I wasn’t able to remove it in a way to take pretty plated photos.

In the end, I ate it out of the jar. As long as you’re saving energy cooking, why not save yourself the extra plate to cook?

Disadvantages of cooking in the dishwasher 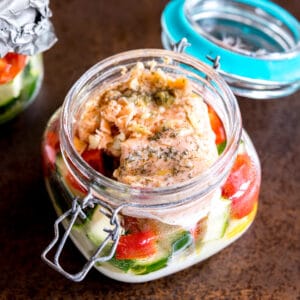 Save energy by cooking salmon in the dishwasher while you clean your dishes. Not only is it a sustainable way to cook, but it also makes a deliciously flaky and moist fish.
No ratings yet
Print Pin Rate
Prep Time: 10 minutes
Cook Time: 1 hour 50 minutes
Total Time: 2 hours
Servings: 2 people
Calories: 371kcal
Author: Tracy Ariza, DDS

You can use fresh garlic instead of the garlic powder, but keep in mind that the minced garlic doesn’t cook for long enough to become milder in flavor. It, instead, remains quite strong in flavor which is why I suggested using garlic powder.  Do not use quick or light dishwasher cycles. You can cook the fish with other vegetables instead. Other foods that cook well in the dishwasher include most vegetables, fish and seafood, couscous and other pasta dishes, etc.
Course Main Dish
Keyword fish, seafood
Other Diets Candida Diet, Dairy free, Gluten free, Keto, Low Carb, Paleo
Tried this recipe? Tag me today!Mention @thethingswellmake or tag #thethingswellmake!
Serving: 1fillet (150g) with vegetables | Calories: 371kcal | Carbohydrates: 5g | Protein: 31g | Fat: 25g | Saturated Fat: 11g | Cholesterol: 120mg | Sodium: 195mg | Potassium: 1054mg | Fiber: 2g | Sugar: 4g | Vitamin A: 1187IU | Vitamin C: 56mg | Calcium: 34mg | Iron: 2mg

Have you ever tried cooking in the dishwasher? I’d love to hear what you’ve cooked and how it turned out!

This post was originally published on March 7, 2015. It was rewritten and republished in November 2019 to add more information, a recipe, more pictures, and video.