Should You be Using a Menstrual Cup? Which One?

You are here: Home / Make it Yourself / Face & Body / Should You be Using a Menstrual Cup? Which One?

This post was created as part of the SckoonCup Review Campaign in which I am a financially compensated blogger. The opinions are my own and based on my own experience.

Just over a year ago, I wrote about my very first experience using a menstrual cup. I gave my reasons for trying out a menstrual cup and explained why it’s a great non-toxic and environmentally friendly alternative to pads and tampons.

What is a menstrual cup?

For those who don’t know what a menstrual cup is, it’s a small cup, usually made of silicone or latex, that is used in place of a tampon to collect menstrual fluids.

If you don’t know anything about them, I’d suggest you read that other post. When I wrote it, I had only tried one during one cycle, so not only does it give a lot of information about what menstrual cups are and why they are great, but it also provides an honest experience from a first time user. At the time, my conclusion was that while I didn’t yet love it, I was pleasantly surprised by it.

You see, I have never been able to get used to wearing tampons. In fact, I quite hate them. Tampons work by absorbing fluids which, in theory, is great. The problem is that they end up drying and becoming uncomfortable for many, like me, who use them.

I was using disposable pads, but apart from not being environmentally friendly, I find them gross. The moment menstrual fluids leave your body, they react with the air and begin to smell bad. I could go into more details about why I hate them, but I’d prefer to focus on why I now love the menstrual cup.

The menstrual cup is different.

It’s bigger, so you’d assume it to be more uncomfortable, but because it isn’t drying, I barely notice it.

When I wrote my first post, I was able to notice the menstrual cup more than I do now. That could be because I was getting used to it and was constantly thinking about if it was bothering me or not.
Since then, though, I haven’t gone back!
I have only used the menstrual cup, and I am now so used to it that I have to really tense the muscles and specifically try to feel it to notice that it is there.

I have also since switched to a different menstrual cup.

Which menstrual cup am I using now?

Actually, as I’m writing this post, I am wearing a Sckoon menstrual cup.

It looks a bit smaller than the first menstrual cup I used, but it really holds about the same amount of fluid. (Yes, I did try it out with water to see!) 😉

The two menstrual cups look pretty similar, but they are quite different in a number of ways.

Despite not being convinced by the thin stem of the Sckoon cup, I have chosen to continue to use it over my older, generic cup. 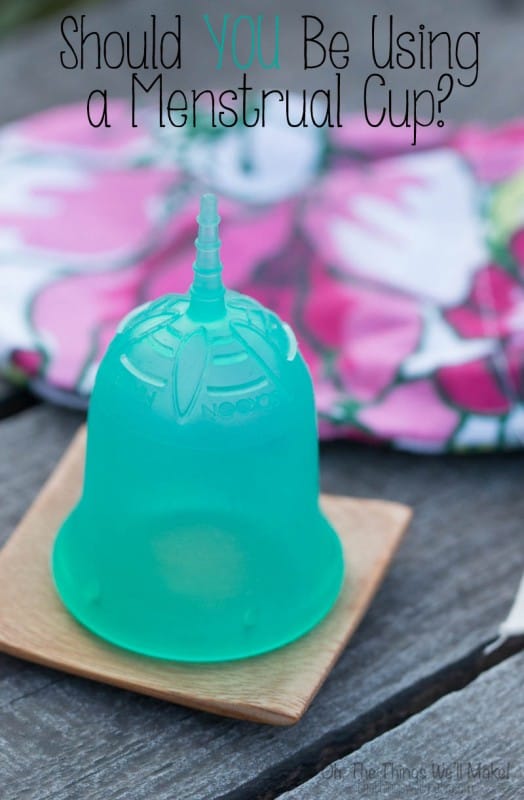 So, finally, I come to the answer to my question…

Should YOU be using a menstrual cup?

My short answer is YES!

I think every menstruating woman should at least try one.

I didn’t completely love mine at first, but I liked it so much better than the other available options that I stuck with it. Now, over a year later, I can honestly say that I do love the menstrual cup, and would NEVER, EVER go back to what I was using! No way!

Use whichever menstrual cup you prefer. While I’d love for you to buy a Sckoon cup using my affiliate code, it’s more important to me that you choose the cup you feel most comfortable trying.

If you want to try the Sckoon cup, you can find it on their website. AD
By using my referral code, T7TG1H, at the time of purchasing, you’ll receive 10% off, and will help me earn a small commission too. Win-Win!

If you love the menstrual cup like I do, get the word out!

The menstrual cup still seems to be new to so many women, and I think it’s important for women to know that more comfortable, sustainable, and cheaper (when compared to having to buy disposable products over and over again) options exist.

If you have any questions about it, feel free to comment or send me a private message, and I’ll try to help out however I can.

While I wrote this as part of the SckoonCup Review Campaign in which I am a financially compensated blogger, I was about to update my experience with the menstrual cup anyway to tell you how much I love them. So, the opportunity came at the perfect time, I guess. 🙂