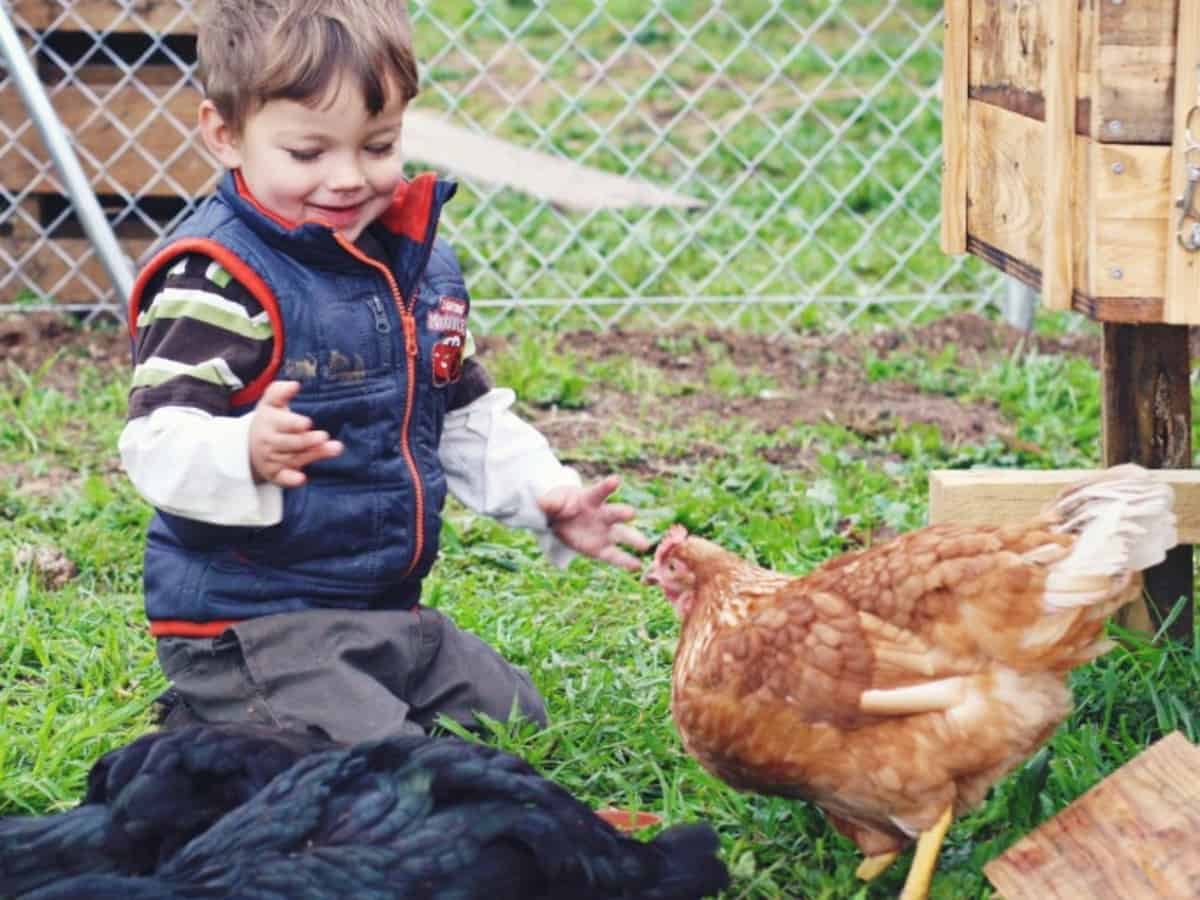 Yes, we have hens!

When my son was 2 years old, we got our first 4 hens. He had helped up build our chicken coop from pallet wood, and loved running around behind our hens trying to catch them.

At one time, I meant to write more about life with hens, but I started focusing my blog elsewhere. For now, you can read on the blog how we keep predators (in our case, our dog) away from our hens. I’ve also showed how to safely clip a hens wings so they (hopefully) don’t fly over your fence.

Maybe someday I will get around to showing you, more or less, how we made our chicken coop from pallets. (Sadly, I didn’t take photos of the process.)

Should you get hens?

I have to admit that when we first got them, I was mostly terrified of birds in general. On the day that we picked them up, I made my husband let them out of the box and into their new run; I didn’t even want to get near them.

I’m glad I went through with getting them, though. Sometimes I even wonder how I got along without them. Not only do they provide us with the best eggs I’ve ever eaten in my life, but they are incredibly sweet and provide great companionship.

My son loves them more than I do. He plays with them all of the time, and says that chickens are his favorite animal.

Of course, each person’s situation is different. We have plenty of room for them to run free. When healthy, they don’t need a lot of time dedication, but they are one more thing to care for. (And one more thing to worry about – such as finding someone to care for them when you go on a trip.)

Being the only adult in the house that really showed much interest in the girls, I unofficially named our first hens.

My husband unofficially named one of them “Ronaldiña.” That’s a “fútbol” (soccer) reference because she liked to kick at her food. If you were to ask him which hen is Ronaldiña, though, he wouldn’t have a clue. He might have been able to narrow it down to one of the 2 black hens, but that’s about it. (And then he mocks me for only noticing the colors of peoples’ cars, and showing no interest in the make or model!?!?!?)

I decided to respect his unofficial name. So, poor Ronaldiña got stuck with her (albeit horrible) name. Poor girl. At first, she was the rowdiest of them. She was the first to allow me to come near her, making me think that she was going to be my best hen friend. In the end though, she was the only one that never really liked to be held.

Ginger was one of our brown (or “red”) hens. She had the most white feathers of the two, and was very friendly. She lived the longest of the four, and was still laying eggs right up until the time of her death over 6 years later.

The two brown hens were the most social. Nutmeg, my favorite, was the first in line to be held (or to eat whatever food I bring down to them). We bought Nutmeg a few days after bringing the others home. She was a replacement for our unlucky, late hen, Maggie Mae, who escaped our first rudimentary hen house, and whose encounter with our hen predator, Kahlua, led to her early demise.

The tragic loss of Maggie Mae was, by far, the most unfortunate of my experiences with the hens, and I still feel a little sick to my stomach when I think about that day. She was my favorite of the first four hens, and I was overcome with guilt for not having better protected her. (I had been so focused on my dog not being able to get in, that I hadn’t even considered that the hens might slip out underneath the coop!)

My other black hen, the one with the most black feathers overall, was Pepper. She was the timidest of the black hens, at least at first, but later took it upon herself to keep poor Ronaldiña in her place. She constantly pecked at her when they ate.

A few years later, we decided to add to our collection of hens, and brought in two new white hens, Erika and Noa. (Noa is our niece and Eric is our son.) Not too long after bringing in the 2 white hens (having 2 white, 2 brown, and 2 black hens), we came home one day to find poor Nutmeg (my favorite) dead in the middle of the yard. Upon autopsy, we found maggots around her vent, but we hadn’t noticed her acting strangely before her death. Hers was the only death to completely take us by shock (other than the first hen attacked by our dog, of course).

I actually chose white hens because I wanted white eggs. I was curious to try naturally dyeing them for Easter. (In the end, my trials weren’t as successful as I would have liked, so I never posted it on the blog.) I can make very bright natural food colorings, but the eggs didn’t take up the color well. It’s probably because I hate hard-boiled eggs. (The unboiled ones have a protective coating that didn’t allow for bright dyeing.)

The white hens are much faster and more active than the other (fatter) hens. They don’t like to be held much. I could distinguish the two of our because Erica’s comb flopped to the right while Noa’s flops to the left (over her bad eye). Poor Erica died, several years later, from an accumulation of fluid in her abdomen. We were able to remove part of it, and it prolonged her life a little bit, but in the end, we sadly found her dead soon after.

Noa is always finding ways to escape the hen enclosure. She’s very smart. Even if we clip her wings, she finds other ways to escape. (Luckily, Kahlua the “evil hen predator” no longer shows any interest in hurting the hens. Noa jumps up on the laying box, then up onto the coop, then up onto the wall between our neighbor’s yard and ours. Finally, she jumps back down onto our avocado tree and into the rest of our yard. Noa is our “pirate” hen. She only has one eye. We don’t really know what happened to the other one, the one hidden by her comb. (As she is always jumping around where she shouldn’t be, though, she probably got into something she shouldn’t have.) Noa appears to live happily with the newer hens and doesn’t seem to have any ill effects of being visually impaired.

My son had been wanting to get chicks for a long time, so I decided, in the spring of 2019, to finally give in and get him some. I didn’t want to get really tiny ones because I was afraid it would be difficult to care for them. I found a place that offered 6 week old hens, and we bought 2 gray hens (Biblue) and one brown hen (Bignee).

“Pío pío” is the term used for birds chirping here in Spain, and these hens made a cute little chirping sound so Eric called them his “pío píos”. He was really sad when our peeps stopped chirping.

I helped my son name the hens. We chose names that were based on their colorings. The lightest gray one is Diamond, and the darker gray hen is Shadow. Shadow’s comb has never turned red (or fully developed?) She does appear to be laying, though. Penny is the copper-colored hen, Eric’s favorite. She’s also the largest. of the hens and weighs quite a bit.

I quite like Shadow, and she is the one who always comes to greet me and allows me to pet her. The others usually keep more of a distance. (Although, at times, Penny also is quite friendly.)

Diamond almost died several months ago. Her abdomen was swollen and we found that it was filled with what appeared to be a broken egg. We ended up aspirating most of the yellow gunk out of her (yolk?) with a wide gauge needle and didn’t really have great expectations. Months later, though, she seems to be doing perfectly! I think she’s even laying again.

I’m glad we went through with getting hens. We’ve gone through a few rough patches with them, but they are fun to have around. (My husband, who gets sick of us having to clean up the terraces after them, might not fully agree, until it’s time to eat Spanish tortilla, of course, made with delicious eggs.)

This post was originally published on November 7, 2013. New information was added in 2021. This post is more of a journal post for us to remember our various hens over the years.

Menstrual Cup: Everything You Wanted to know…
Next Post: How to make Kombucha From Scratch