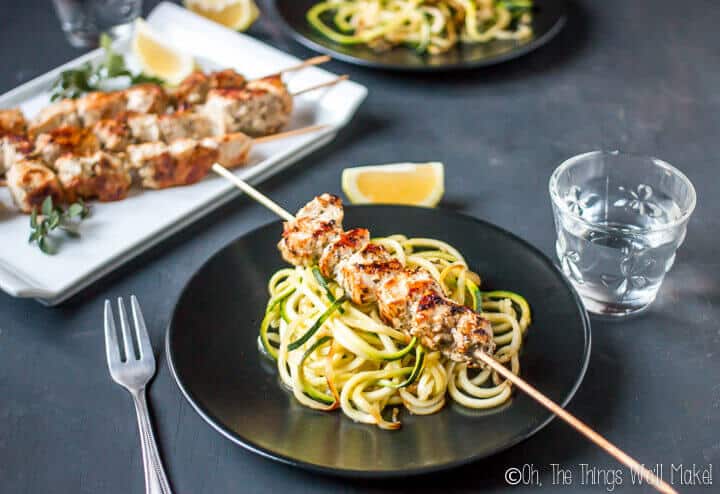 Puerto Rican pinchos de pollo, marinated chicken kebabs, are traditional street food in Puerto Rico and can be made from pork or chicken that has been marinated in a tangy sauce and then grilled to perfection.

While most of you know that I live in Spain, after having grown up in the US, you may not know that I also have also spent my fair share of time in several Latin American countries.

My mom retired this year from teaching Spanish, but over the years her job brought me on several month-long visits to other countries. When I was around 10, we spent the month of January living with a family in Mexico city, and the following year, we spent the month of January here in Spain. Years later, I went back with her to Mexico, this time staying with a family in Mérida, in the Yucatan peninsula, for yet another month.

It wasn’t just her job that brought me South, though. I also have family ties to both Venezuela and Puerto Rico.

One year, when I was in college, I had fun visiting my aunt and cousins in Venezuela for a couple of weeks during Christmas break.

I also enjoyed a visit to Puerto Rico with my Puerto Rican step mom on a trip to visit her family back there. I loved it so much that I convinced my mom to go back with me the very next year.

Puerto Rico was absolutely gorgeous. From the “El Yunque” rainforest, to the phosphorescent bays, every new site struck me as more beautiful than the last.

As for the food, I fell in love with lots of different things. I loved drinking coconut water fresh from the young green coconuts, and eating tiny green fruits called quenepas.

I also became obsessed with eating tostones, fried green plantains. So much so, that I craved them and made them often throughout my pregnancy.

That’s one of the reasons that I was really excited to see that a fellow blogger friend, Amanda Torres, from The Curious Coconut, had just published a new book called Latin American Paleo Cooking.

Way back when, I had bought a Venezuelan cookbook to learn how to make hallacas, empanadas, and bolas de queso, but now that I eat more of a paleo diet myself, I appreciated the effort she made to share family recipes in a paleo friendly way.

Not only has she paleo-tized the recipes, she went the extra mile and made most of them paleo autoimmune protocol friendly! (And has suggestions for adapting some that aren’t.)

Her book shares a huge variety of over 80 great recipes, including a recipe for the tostones that I have always loved to make myself. There are main dishes, sides, and desserts I loved while in Puerto Rico like tembleque (almost like a coconut flan), and tarta de tres leches.

I couldn’t wait to get to trying out one of the recipes, but I wasn’t sure where to start. I could have made one of my old favorites, but instead, I decided that I wanted to try something new.

Because I’ve been trying to lose a bit of weight this summer, I have eliminated most sugar, and have severely limited my starches. That meant I’d hold out on making tostones again until I reach my goal.

Instead, I chose what could have been a recipe for disaster: the Puerto Rican pinnchos de pollo, aka. Marinated Grilled Chicken kebabs.

So, why do I say that this could have been a recipe for disaster?

Surprisingly, though, despite its simplicity, Amanda’s recipe for pinchos de pollo was easy and delicious. The marinade is similar to the one I use in my souvlaki marinade recipe, but switches out the fresh thyme for freshly ground black pepper. It’s amazing how such a subtle change can change the flavor and feel of the dish, and can even make chicken breasts palatable. 🙂

I made the pinchos de pollo for dinner, so I didn’t want to head outside and fire up the grill. I made the chicken in a pan on the stove instead, but it still turned out great. To keep things super healthy, I served it over a bed of zucchini noodles, to which I added some of the same ingredients from the marinade. Overall, I thought it was a great, easy, healthy dinner, and my husband also gave it two thumbs up.

The next time I planned on making this, I had the chicken marinating in the fridge when my husband surprised me with fresh fish for dinner. I decided to freeze the marinating chicken cubes so that I could make the marinated chicken kebabs some other night. When I defrosted them to cook them a couple of nights later, they turned out beautifully. So, yes, you can do the prep work ahead of time, and grill these up at the last minute.

Ready to try them for yourself?

Puerto Rico Pinchos are traditional street food in Puerto Rico and can be made from pork or chicken that has been marinated in a tangy sauce and then grilled to perfection.
5 from 5 votes
Print Rate
Prep Time: 2 hours 30 minutes
Cook Time: 10 minutes
Total Time: 2 hours 40 minutes
Servings: 4 people
Calories: 230kcal
Author: Tracy Ariza, DDS