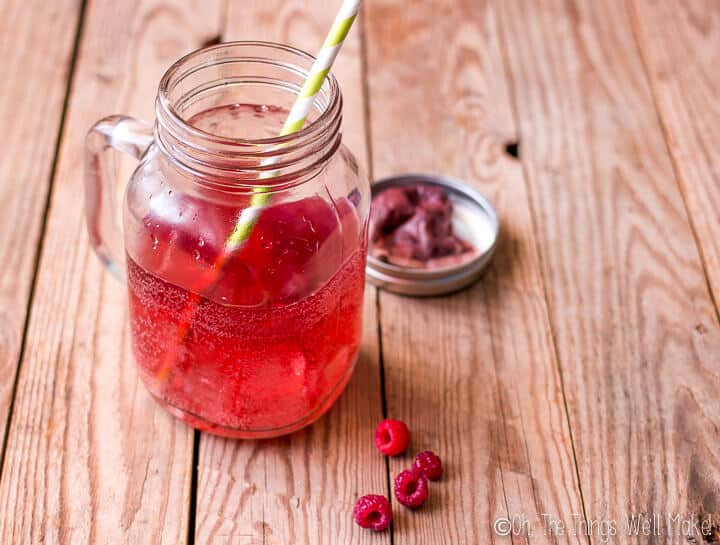 Ditch the unhealthy sodas, and switch to a much healthier paleo red pop, or red soda, which can be made two ways using a combination of herbs, fruits, and soda water.

In the heat of the summer, it’s normal to want to reach for a cold beverage to quench your thirst. I have it easy: I’m a water addict, and have no problem downing a glass of cold water when I’m thirsty. I wasn’t really brought up drinking soda pop, though, so I never really got addicted. That said, I know a lot of people struggle with giving up soda when they want to start leading a healthier lifestyle. Those beginning a weight loss journey are often surprised by how much weight they can lose just by giving up drinking soda.

Not all soda pop has to be unhealthy, though. I’m guessing there aren’t very many healthy sodas you can buy, but you can make your own.

Not too long ago, I shared with you how I make a healthy and paleo ginger ale using freshly grated ginger root. Despite its simplicity, it has been one of my favorite recipes this year! Whenever I have cravings for some sort of fancy umbrella drink, I would make myself a glass of that healthy ginger ale served in a pretty glass and I didn’t really feel I was missing out an anything. Something in the ginger ale also seemed to help curb my cravings for other not-so-healthy foods. I’ve become so accustomed to my new found homemade pop crush, that the other day, when we had friends come over and I decided to mix up a cocktail of gin, lime, and soda, it just tasted weird to me. I decided I just wanted my ginger ale instead. (The same thing happened to me when I switched out beer for non-alcoholic beer during my pregnancy. I was never able to go back to the real deal, and now don’t ever drink either of them.)

So, switching out drinks you are used to for healthier versions can actually work! You may find that you will get so accustomed to the new versions that their unhealthy, syrupy sweet counterparts will eventually no longer be appealing to you. (For me, it only took having a few of my soda addicted (younger than me) 20 year old patients in dental school needing dentures to scare me into never wanting to have another cola in my life, not that I liked it much to begin with!)

What is red soda pop?

First, let me start out by saying that although I live in Spain now, I’m originally from Michigan. Where I grew up, we drank “red pop” and not “red soda.” (Well, those of us that drank soda or pop or whatever, I mean!) I have a hard time talking about pop since living here, as most English speaking people who I encounter talk about soda and not pop. So, I find myself calling it soda pop, which allows me to embrace both terms. 🙂

Despite the fact that the idea of drinking it now grosses me out, I have to admit that I fondly remember occasionally having a can of red soda after winning a softball game in the summer or drinking a glass of it at school skating parties. We mixed it together with colas and lemon sodas to make a suicide punch.

Red pop was a bright red soda that had a berry type flavor. I think it’s supposed to be mainly strawberry flavored, but it definitely doesn’t taste like eating a bunch of fresh strawberries. I’ve since seen that there is a different type of red soda, called Big Red, that is supposedly more multi-fruit based in flavor. Either way, the red pops that I used to drink as a kid were fruity, sweet, tangy, and fizzy (albeit a bit syrupy).

Watch me make both versions of this Healthy Paleo Red Soda Pop.

I came across the idea of making a healthy red soda pop by accident. I often drink teas and herbal infusions after dinner, when most people here order coffee, and one day wanted to drink some water, but I didn’t have a clean glass. I poured the cold water into my empty teacup, having left my herbal berry tea bag inside.

I was surprised to find how much color and flavor infused into the cold water, even after having used the tea bag once. I decided to try experimenting at home with cold infusion of herbal teas. Rather than use plain cold water, though, I decided to use sparkling water instead. The bubbly soda water infused with my favorite berry tea, Clipper Wild Berry Tea.

I’m not sponsored by or affiliated with the company in any way, but I’m mentioning it because I find most of their teas absolutely delicious. This one might be my favorite.

When I added that wild berry tea bag to my soda water, the flavor and color infused into the water almost immediately, and I was pleasantly surprised by what a great flavor it gave the water. (You can either buy sparkling water, or make your own soda water.)

The tea I used has licorice root as one of the ingredients, which gives a natural sweetness to the tea, even without adding any sort of extra sweetener. If you have a sweet tooth, though, you’ll probably want to sweeten it up a bit, at least while you’re making a transition from the more heavily sweetened commercial sodas. You can add a few drops of stevia, what I normally use when I’m looking for a sweeter treat, or you can also add a dash of maple syrup.

I wanted to share my new found simple paleo treat with all of you, but I didn’t think that you’d be able to buy my brand of berry tea in the US. In the end, it is available through Amazon in other countries, but a lot of the expats were complaining that they didn’t like the format as much in the US, and that it was cheaper overseas. I wasn’t sure if using other brands would give something as nice as what I was drinking either, so I decided to recreate it from scratch (as usual). First, though, let me show you how to make this super quick and simple treat the easy way.

To help recreate the recipe, I studied the ingredient list of the tea I was using. The main ingredients included hibiscus and rosehips, both of which help give the soda its characteristic red color. They also both add a bit of tanginess that I happen to love.

Apart from the hibiscus and rosehips, the tea uses licorice root, dried pineapple, and “natural flavorings.” While I love this tea, I do have to say that I normally try to avoid anything that “natural flavorings,” because you never know exactly what that means! I figured that the natural flavorings was what gives this berry flavored tea a berry flavor, so I decided to use frozen raspberries instead.

As for the pineapple, I found some dried pineapple pieces in the local health food shop. If you can’t find it, you can either use fresh or frozen pineapple along with the berries, replace it with another dried fruit, or just leave it out.

The red raspberries really give off a great flavor, and while both methods to making this red pop give off a similar flavor, they are slightly different, of course.

What is sparkling water?

Sparkling water is carbonated water. It can either be a naturally carbonated mineral water, or a water with carbon dioxide added to it.

I’ve been making enough of it lately to warrant buying a water siphon, but you can also buy it bottled. I cover the topic of how to make your own sparkling water, and how to know the difference between soda water, club soda, and tonic water in my homemade ginger ale post. 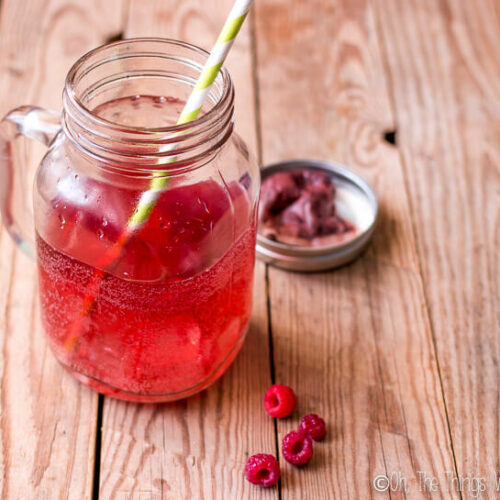 If you have problems with high blood pressure, be careful to not have too much tea with licorice root in it too often. You can use less, leave the licorice root out altogether, or just not drink this all day long. 😉
Course Beverages
Cuisine American, Party Food
Other Diets Dairy free, Gluten free, Low Carb, Paleo, Vegan
Tried this recipe? Tag me today!Mention @thethingswellmake or tag #thethingswellmake!
Calories: 16kcal | Carbohydrates: 3g | Sodium: 3mg | Potassium: 27mg | Fiber: 1g | Sugar: 1g | Vitamin A: 65IU | Vitamin C: 10.7mg | Calcium: 9mg | Iron: 0.3mg
Category: Beverages & Smoothies, Recipes