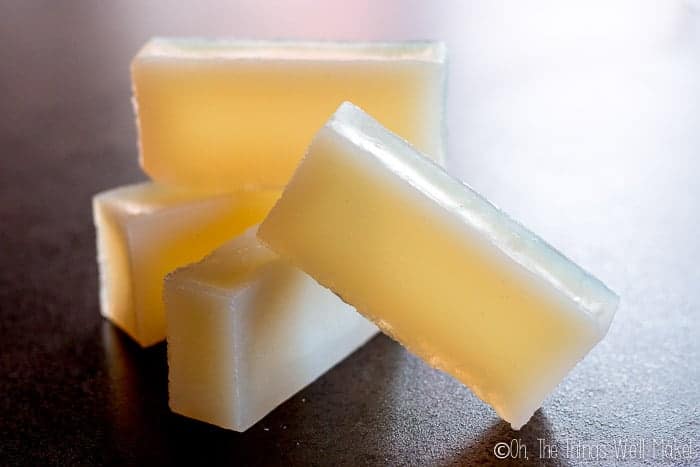 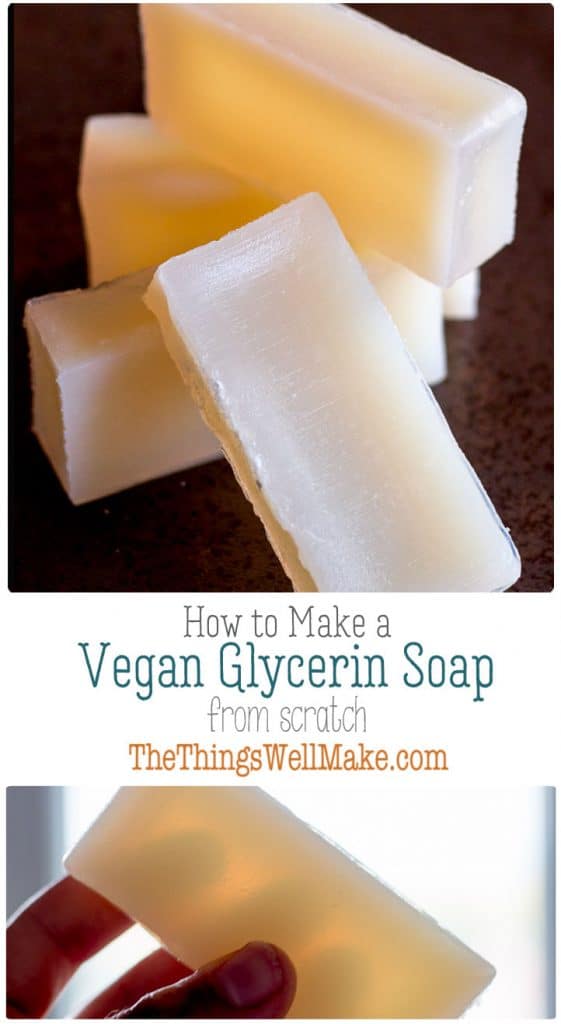 An alternative to glycerin soaps made with lard or tallow, this vegan glycerin soap recipe uses coconut oil instead to make a hard bar of soap with lots of lather and great cleansing ability.

Last year around this time, I shared with you a recipe for a homemade glycerin soap, which has since become one of my favorite soaps. It’s a nice hard bar of soap that gives a good lather and feels gentle on the skin. Its scent, if not masked by fragrances, is clean and fresh. When I first started using my homemade glycerin soap, it was a lovely sunny yellow color. Its color matured over the months progressing into a dark amber.

Some people had a problem with my first recipe, though. My first glycerin soap recipe used tallow, a rendered beef fat. Whether it be people who were avoiding using all animal products or just those who didn’t want to use anything derived from cows, I was constantly getting messages from people looking for an alternative recipe. Many people asked me if they could make the recipe without tallow, but I wasn’t sure. I mean theoretically, I could formulate a recipe without tallow, but I wasn’t sure what the resulting soap would be like and I don’t like suggesting recipes to people without having tried them myself.

Before we switch out the tallow for another oil, we need to think about why tallow was used in the first place.

When making a glycerin soap, we use 3 different “solvents” to remove part of the crystalline structure of the soap, allowing light to pass through. That’s what gives glycerin soap it’s characteristic translucency, but it can also weaken the soap and make it softer if you don’t begin with a very hard soap.

Animal fats like tallow and lard are often used in soap making because they are solid fats that normally make nice, hard bars of soap (that are also very cleansing). Most vegetable oils, on the other hand, make softer bars of soap that wouldn’t hold up well to the use of the solvents. That’s one reason why, even in “normal” soap recipes, most vegetable oils are usually combined with solid fats like the animal fats to make a better soap.

There are a few exceptions, though, and some vegetable fats can be used on their own to make decent bars of soap.

Olive oil is an interesting exception because it is a liquid oil that can make a hard bar of soap with time. Soaps made with only olive oil may take longer to harden up, but they eventually make a nice, solid bar of soap. I have a pure Castile soap recipe up on the blog that only uses olive oil. While soaps made with only olive oil are on the conditioning side, they aren’t as cleansing as soaps made with some of the more solid fats, and they don’t provide a lot of lather. Some people don’t like the feel of pure Castile soaps when used.

This soap, despite being made with primarily coconut oil, seems to be much milder, probably in part to the solvent process and the addition of Glycerin.

Castor oil is also a great oil to use in a soap like this one because it also somewhat acts as a solvent. Normally you wouldn’t use castor oil in a soap at over 5-10% of the recipe oils because it can make a sticky bar of soap, but in this sort of soap I haven’t had any issues. I’m not sure if it’s because of the way the solvents react with the soap, but this soap isn’t sticky at all.

The castor oil helps balance out the soap, and also theoretically helps you get a more translucent soap, if that’s one of your goals.

I’ve found, since posting my last glycerine soap recipe, that many people have the goal of making a truly transparent soap. I have to admit that it wasn’t really one of my main goals, and actually, I like my soaps to be on the more substantial side. That said, I do understand how making a transparent soap could come in handy in certain situations. It could be fun for making a soap with inclusions or something like that. (You can cut up different colored soaps or fun objects and embed them into a transparent soap.)

Getting a natural soap to be truly transparent is a bit tricky, though, because it’s hard to judge just how transparent your soap will be when it is in liquid form. The melted soap looks completely transparent but will start to get more opaque as the soap cools and the crystalline structure forms together. Most melt-and-pour soaps I’ve studied, which is what people usually use for these types of inclusion projects, aren’t fully natural soaps. Many are really detergent (aka syndet) bars. Others have the addition of chemicals like propylene glycol to make them easy to use and pour and stay transparent if they began that way.

With this soap, even if you were to get to the point that it was truly transparent, if you decided to melt it and repour it, you would most likely have to adjust the solvent levels again so that it would cool transparent again.

Back to my story…

When I began making this soap, months ago, I didn’t realize that transparency was going to be such a high priority for so many of you. So, I didn’t put that much effort into trying to get the soap transparent. My main goal was to make a really nice, hard bar of glycerin soap that isn’t difficult to make. The other glycerine soap was probably my very favorite of all of the bar soaps I’ve made so far, so I was excited to have another great soap that isn’t too difficult to make.

I added the solvents and got it somewhat translucent. Light did pass through them, but they were really quite opaque.

In part because I was curious about if this soap would melt nicely, and in part, because I wanted to try to make a soap that was at least a bit more translucent, I re-melted some of the bars of soap that I made with this batch.

I, once again, used the slow cooker to allow the soaps to slowly melt at low heat. you can see in the photo above that the soaps melted quite nicely without needing to add anything, and the resulting liquid is pretty transparent.

When I’ve remelted bar soaps in the past, I’ve had to add water to most of them. This soap, though, melted nicely and easily.

Once I remelted, I added in some more of the various solvents. To be honest, I didn’t measure anything, as this was an experiment and I hadn’t even weighed out the soaps I was remelting to begin with.

To see if your soap will be transparent or not, you’re supposed to do a test after each addition of any of the solvents. The test consists of smearing a bit of your melted soap over a cold transparent glass. You can keep the glass in the freezer between tests so that it will quickly cool and harden your soap.

In my photo, you can see that while the soap looks transparent when thin enough, in the thicker areas, it’s only translucent at best. If transparency is your goal, you’d have to continue to experiment with the solvents if this was your result.

You might be tempted to just add a ton of each of the solvents, but that might not be the best approach either. It is said that the transparency follows a bit of a solvent curve. So, as you add solvents, the soap will continue to get more and more transparent, up until a certain point, at least. After that, the addition of more solvents could just make the soap more cloudy.

For my recipe, I calculated the center point of what is normally considered to be the range of needed solvents for getting your soap to be more transparent. Based on my experiments, though, you’ll probably need to use a bit more than that. It will, of course, depend upon the alcohol used.

What alcohol should you use as your solvent?

If you can find a food grade alcohol like Everclear that is 70% or higher strength, that would be a great alcohol to use as a solvent. Here in Spain, I can’t find one with that high of an alcohol concentration.

I decided to use a denatured alcohol. It’s basically similar to the alcohol that is sold in pharmacies here. What I have noticed, though, is that most of the alcohols I’ve seen for these sorts of purposes here are ethyl alcohols. Rubbing alcohol, or as it is called in many places, may be either ethyl alcohol or isopropyl alcohol based. I’ve heard people say not to use rubbing alcohol as the solvent for making glycerin soaps because it can leave an unpleasant scent behind in the final soap.

The higher the concentration of alcohol, the more likely you’ll be successful at getting a more transparent final soap.

Is there any substitute for alcohol?

Just as many people wanted to avoid using tallow or other animal fats, others preferred to stay away from using alcohol. In most cases, this is for religious or political reasons.

First, I’d like to say I’ve read accounts of people living in Islamic nations that thought that all alcohol was prohibited. They later found, though, that it is possible to buy alcohol that isn’t meant for consumption at the pharmacies. If your reason for not wanting to use alcohol is that, you may first want to check to see if buying pharmacy grade alcohol is an option where you live.

I prefer to use alcohol over something like propylene glycol so I haven’t tried it personally, but I’ve read that it is possible to use the latter as al alcohol replacement in this sort of recipe.

How to make a vegan glycerin soap

Hopefully I’ve answered a lot of your questions, so let’s get started!

An alternative to glycerin soaps made with lard or tallow, this vegan glycerin soap recipe uses coconut oil instead to make a hard bar of soap with lots of lather and great cleansing ability.
This makes a large batch that will fill 2 loaf pans. You can divide this recipe in half if you prefer.
5 from 2 votes
Print Pin Rate
Prep time: 10 minutes
Active time: 4 hours
Total time: 4 hours 10 minutes
Servings: 18 bars of soap
Author: Tracy Ariza, DDS