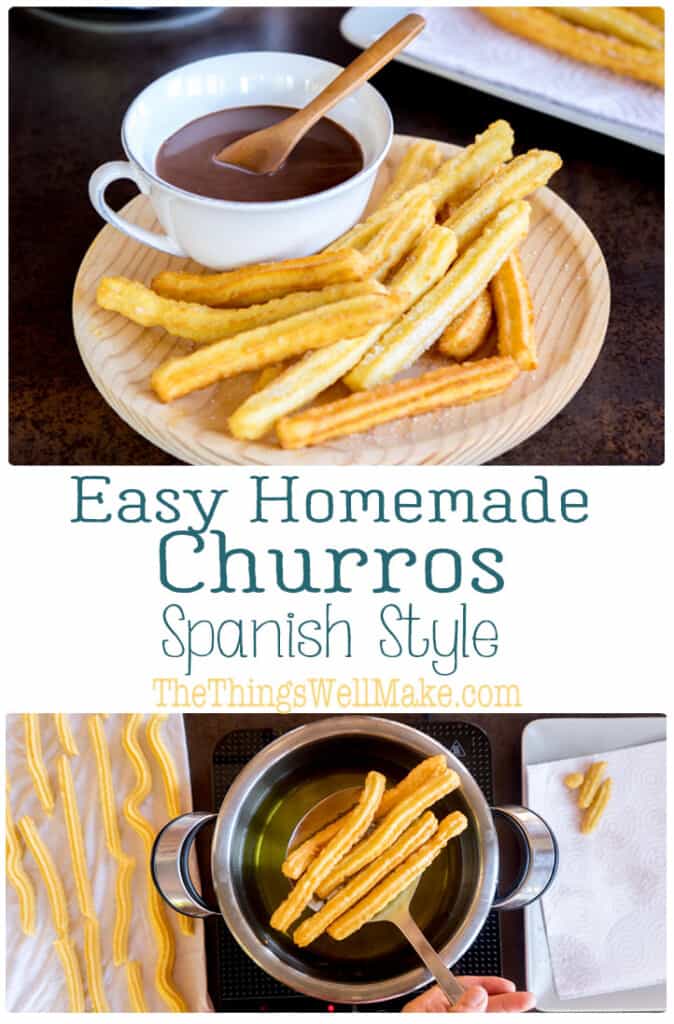 One of Spain’s signature recipes, churros are a delicious fried pastry that makes a delicious breakfast or snack. They’re also quite simple to make at home with this easy recipe.

Churros are a simple fried pastry. They’re basically the Spanish equivalent of a donut. Rather than being served in a donut shape, though, churros are normally served in a rod or loop shape. As the dough isn’t sweet on its own, churros are usually served sprinkled with sugar.

While they can often be found for breakfast at bars or cafés, churros are also commonly found as street food. They’re sold at fairs, holiday celebrations, and flea markets from mobile churrerías. These churrerías are the Spanish equivalent of cotton candy or elephant ear stands at fairs back in the US.

The churros from street trucks are normally served in paper cones for carrying around. They can be found plain, sprinkled with sugar, covered in dark or white chocolate, or even filled with pastry cream.

My husband knows and often talks to the owner, and one night he gave us a new savory variety to try (one that wasn’t officially on the market yet): churros bathed in a homemade salsa brava.

He also told us how delicious they are when sliced open and filled with ham and cheese. (I’ve yet to try that myself.)

In my area of Spain, churros are normally quite thin and striated. The striations are formed as the dough passes through the star-shaped tip or plate of the machine that dispenses the dough. These striations are said to help give a crispier, more well-cooked churro.

In other parts of Spain, “porras” are more popular. They are a thicker type of churro that is fried without the typical striations. They also are often made with baking powder to give a lighter, less dense dough.

How are Spanish Churros different?

Spanish churros are a bit different than their Latin American counterparts.
Rather than being sprinkled with cinnamon and sugar, the distinct flavor of these churros comes from being fried in olive oil.

(It drives me a bit crazy when I see things labeled as being “churros flavored” just because they are covered in cinnamon and sugar. I have yet to see churros here served with cinnamon.)

Olive oil is one of the most popular oils used in Spain. Olive trees are abundant here. I walk past wild olive trees on my mountain hikes all of the time. In fact, we used to have one in our backyard (but it sadly succumbed to a termite attack).

Some people use extra virgin olive oil. Others prefer to use one with a milder flavor. It’s your choice, of course. While you can fry the churros in a different oil, it won’t give you that same authentic flavor that olive oil does.

Spain's version of hot chocolate is thick and meant for dunking churros and sweetbreads into it. Learn how simple it is to make chocolate a la taza for chocolate and churros using only 2 ingredients!
Check out this recipe

There are several ways that you can shape your churros.

Your first option is to buy a special churros dough dispenser meant for dispensing the dough directly into the hot oil. Most of us aren’t going to be making them enough to warrant buying something specifically for churros, though. Am I right?

Some people use a piping bag with a star-shaped icing tip. Keep in mind that the dough ends up being quite stiff, so it can be difficult to dispense from a piping bag. Also, it can be hard to find star-shaped piping tips large enough to make an ideal sized churro. Most piping tips are small and made for icing cakes.

Cookie presses come in both manual and electric varieties. I found an electric cookie press for around the same price as a manual one, so I bought it for ease of use.

Where to dispense the dough

When they make churros at the fair, a special machine dispenses the dough directly into the hot oil. It dispenses and cuts the dough automatically as the oil moves in a circular pattern below. The movement of the oil keeps the churros from sticking to one another.

When making homemade churros, I used to dispense the dough directly into the oil, too. It was very difficult to dispense and cut at the same time over the oil, though, especially since you also have to worry about them not sticking to one another.

With time, I found that it was much easier (and safer) to dispense the dough onto a clean cloth first. With the churros on the cloth, you can easily cut them into an ideal size and then carefully add them to the oil.

If you want to make your churros ahead of time, the formed dough can be frozen for later.

To cook them, you can either defrost them or cook them directly from frozen. Either way works well.

There are 2 main ways to make the churros dough.

Making churros with a choux dough.

I normally make churros using a choux-type dough. A choux dough is a pastry dough made with only water, flour, butter, salt, and egg. It’s the same type of dough normally used for making puff pastries and eclairs. I like the color, flavor, and texture obtained with that dough.

To make a choux dough, you heat the water, salt, and butter until they reach their boiling point. You then remove the water mixture from the heat and add in the flour. Once the flour is mostly incorporated, you add in an egg.

On the other hand, churros are also commonly made with only flour, water, and salt (with an optional dash of olive oil). That makes those churros naturally vegan.

If you’d like to make vegan churros, it’s quite easy to adapt my recipe. Rather than melting the butter in water, the water can be heated with salt and a dash of olive oil.

Use equal parts water and flour. That means you’ll be using a bit more water than used in the choux dough to compensate for the missing liquid of the egg.

When the water reaches its boiling point, remove it from the heat source and add in the flour. Stir quickly to obtain a thick dough. (You can add a little more water, if needed.)

At that point, the churros are made in the same way as the others.

For those with gluten allergies or sensitivities, churros can be made with tapioca starch instead of wheat starch. I have a recipe for grain-free churros on the blog.

Avoiding gluten? You can still enjoy delicious, Spanish-style churros at home with this easy recipe. These churros are gluten-free, grain-free, and dairy-free, but are definitely not lacking in flavor.

Check out this recipe 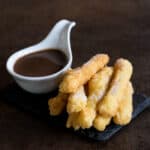 Getting the right texture

When making churros, you want to cook them long enough so that they aren’t raw in the center, but not so long that they become overly dry. To achieve that, the temperature of the frying oil is important.

Ideally, the oil should be at a temperature around 190ºC/375ºF. This ensures that the churros turn out perfectly when golden brown.

You can also see a clip of how they make them at the fair here at the beginning of my video. 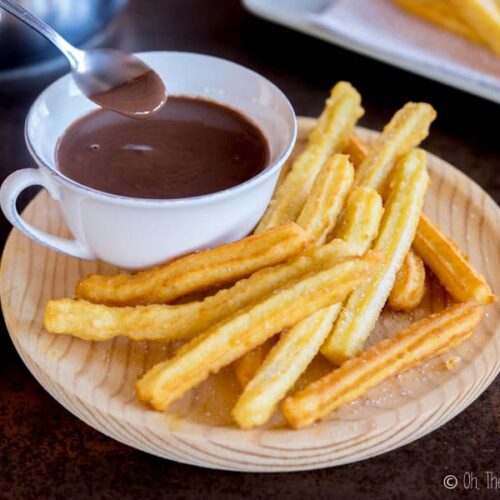 One of the more popular recipes in Spain, churros are a delicious fried pastry sold in bars, cafés, and from food trucks. They are often accompanied by a thick Spanish hot chocolate for dipping them.
5 from 2 votes
Print Rate
Servings: 25 churros
Calories: 68kcal
Author: Tracy Ariza, DDS

Churros are delicious when served with some homemade Spanish hot chocolate. 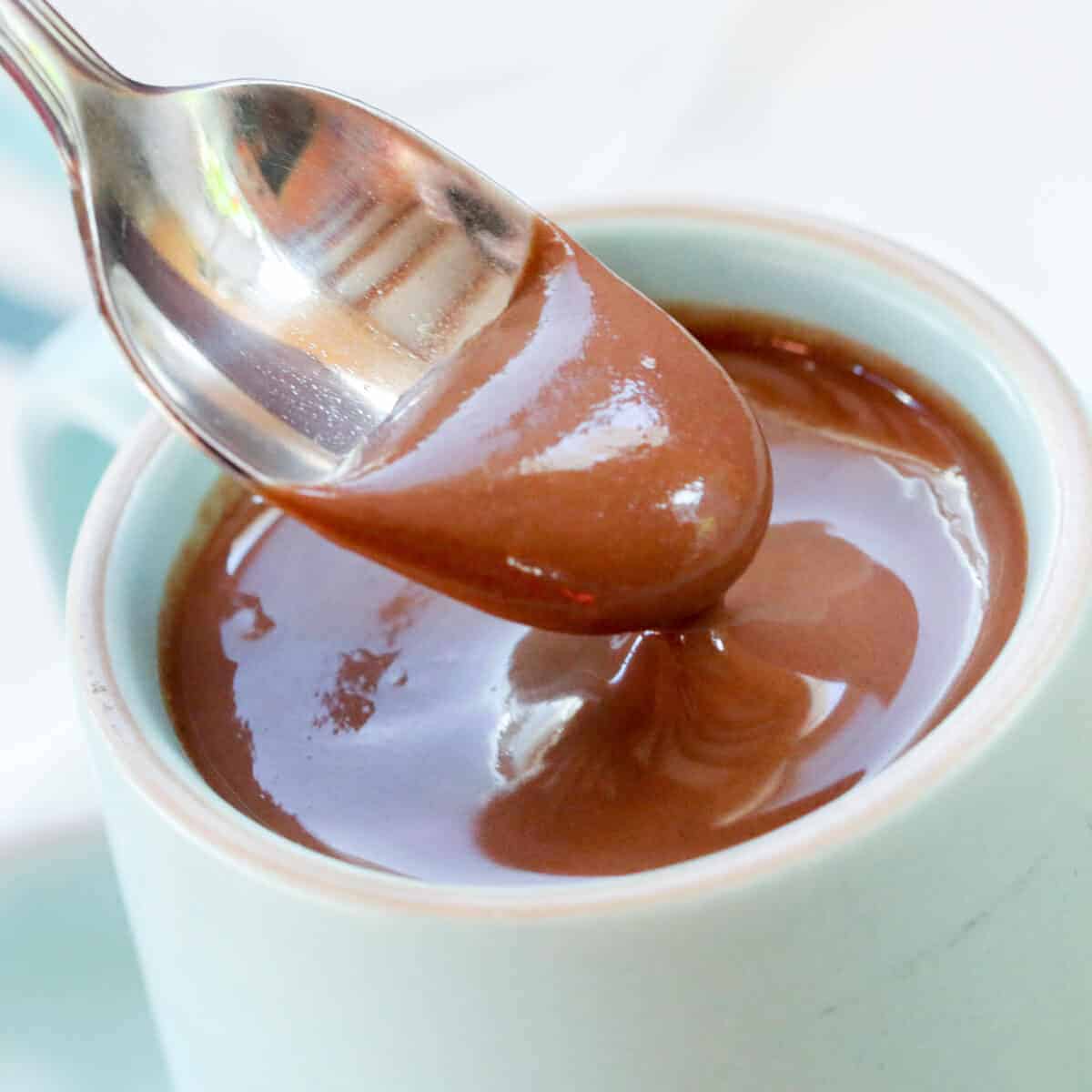 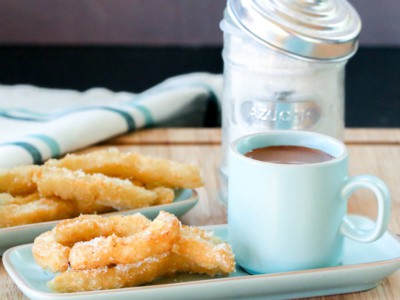 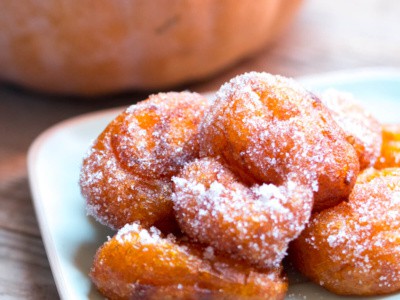