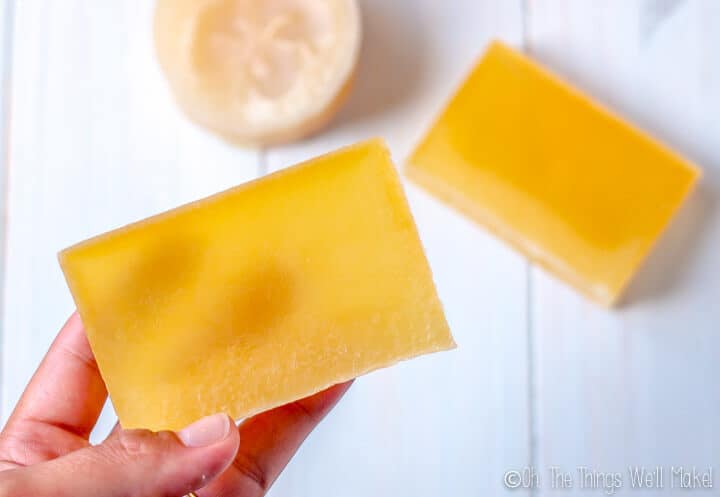 Perfect for those with sensitive skin, this homemade glycerin soap recipe makes a hard bar of soap that lathers nicely while gently cleansing and moisturizing your skin.

What is glycerin soap?

It sounds like an easy question, but there is really a bit of confusion about what should be called glycerin soap.

What most people don’t know is that there is glycerin in all soap because it is a byproduct of the soap making process.

The difference between translucent “glycerin” soaps and other more opaque soaps with glycerin in them, is that the glycerin soaps have been cooked with certain solvents like sugar, alcohol, and, well, more glycerin, to help make the soap crystals small so that light can pass through. (It’s the soap crystals that reflect light back at our eyes, making soap opaque).

Glycerin is a humectant, meaning that it helps retain, or reduce the loss of, moisture.

What’s special about glycerin, though, compared to some other humectants, is that it is an endogenous humectant, meaning we have it naturally in our skin. Glycerin has been shown to help restore moisture and elasticity in the stratum corneum layer of our skin, helping to restore the barrier that protects us.

Interestingly enough, even after you stop using glycerin topically, it can continue to help form a barrier to help prevent moisture loss for up to 2 weeks.

Glycerin soaps are thought to be milder and gentler on the skin. While that probably depends on each particular recipe or soap, I’ve found that this soap has worked well on my son who has sensitive skin with atopic dermatitis. (That said, I still use soaps, or other washing products like gels, sparingly on his skin, and most days only rinse the majority of his skin with water.)

I find this to be a great overall soap for face and body, and I like how it helps reduce acne on my skin.

Watch how I make glycerin soap

First, you have to make the soap, using a hot process method. (I use my slow cooker which works perfectly for both parts of the process.)

After you have made your soap, you need to dissolve the soap crystals to help allow the light to pass through the soap, making it translucent. To do that, you will use a combination of several different “solvents.”

On my first two attempts, I didn’t spend a lot of time trying to dissolve the crystals. I wasn’t careful to keep the slow cooker well sealed, and I didn’t leave the solvents to work longer, or add more of them, to try to get a more translucent soap.

If getting a more translucent soap is important to you, I’ve given you a range of different solvent values for you to experiment with. I chose to add an amount somewhere in the middle of the given range of each particular solvent. You may want to try adding a smaller amount, and increase, as needed, until your soap gets more translucent. Using a stronger alcohol will also probably help you get a clearer soap.

If you’re really picky about getting translucent soap, I’d suggest reading the book, Making Transparent Soap: The Art Of Crafting, Molding, Scenting & Coloring by Catherine Failor. Her techniques are the ones that most people follow when making both translucent solid soaps and translucent liquid soaps. She has another book about Making Natural Liquid Soaps. If you’re interested in making liquid soaps, I have a couple of liquid soap recipes up on the blog. (You can choose to make a liquid castile soap, or a liquid coconut oil soap, or make both and combine them to get the best of both worlds.)

Because we are going to be using solvents to dissolve some of the soap crystals, it’s best to use oils that make a harder bar of soap. This will help ensure you’ll still end up with a hard, long lasting bar of soap despite the solvent process.

In general, oils that are solid at room temperature tend to make harder bars of soap. (Olive oil can also make a hard bar of soap, but it usually requires a long curing process to get it to harden.) Tallow and coconut oil are great oils for this type of recipe; not only because they make a nice hard bar of soap, but they are also said to be good for making a translucent, rather than cloudy, glycerin soap.

Castor oil is another common oil used in translucent soap making, not because it’s a solid oil that makes a hard bar of soap (because it isn’t, of course), but because castor oil is said to be somewhat of a solvent on its own.

Even after using the solvents, this recipe made very hard bars of soap, and I really love the way it lathers. The coconut oil adds to the cleaning factor of the soap and helps make a bubbly lather. The castor oil helps stabilize that lather. This was the first time I used tallow for making soap because it’s not very easy to find here. (I wanted to make my own, but couldn’t get any butchers to save beef fat for me for rendering tallow.) I have to say that I really love it, and plan on using it more often.

Choosing an alcohol as a solvent

I would have loved to use a consumable alcohol without any added scents or ingredients like Everclear, but I wasn’t able to find anything like that here.

I actually went to the supermarket with my mother-in-law and bought some 70% absinthe because it was the only drinkable alcohol I could find over 50% here in Spain. I was slightly embarrassed buying it, and felt the need to say that it was for making soap. In the end, I felt bad about using an expensive alcohol in my experiments with making a translucent soap, and wasn’t sure how the green coloring would affect the color of my final soap. (I wanted to see what I’d end up with without adding anything at all to it.)

I decided to use some 70% denatured alcohol instead. I was worried about it leaving an unusual scent to my soap, but honestly I don’t notice any off putting fragrances from the alcohol, despite my having forgotten to add any essential oils in the end for fragrance.

I think next time I’d try with a stronger alcohol to see if my soap turns out more translucent. If anybody gives a 96% alcohol, or something similar, a try, I’d love to hear how it goes!

I now have been left with a completely full bottle of absinthe at my house, if anybody wants to come for a party. (Just kidding about the second part.)

Because excess oils can make for a cloudy soap, I chose not to superfat this soap. (Superfatting is when you add more oils to the soap than what are needed to react with the amount of lye used. Some unreacted oils remain in the soap, and can leave a hydrating film on your skin when you use the soap.)

The excess glycerin in this soap helps compensate and acts as the leftover emollient that helps make a moisturizing soap. I used the same thought process when making my liquid castile soap and liquid coconut oil soap, and find that both are very mild for use on face and body.

Now that I’ve been using this glycerin soap for awhile, I definitely don’t think it’s missing anything, and love it just the way it is. That said, you could always try adding slightly more oil if you prefer to superfat the soap. 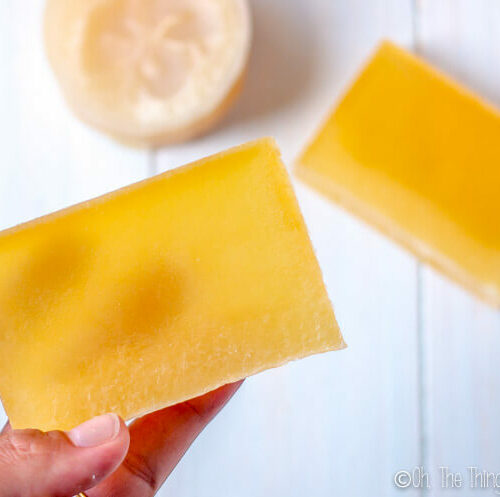 Use the solvents to make it translucent.

The first time I tried to make a glycerin soap, I decided to try using a new wooden soap mold for my newly made soap. I should have experimented with a soap that was easier and quicker to make like my easy, beginner soap.

The mold began to leak, and I ended up with my soap solution all over the counter. I scraped up some of it, and tried pouring it into another mold, but by that point I had a lot of parts that were hardening up and floating in the melted soap mixture. I decided that I was going to use my immersion blender to smooth out the mixture before pouring it back into the other mold.

Because I didn’t let the mixture settle again, I ended up with a more cloudy soap. The soap started to settle on its own leaving a clearer, harder bar of soap on the bottom, and a foamier, opaque soap on top.

What did I learn?

It’s just as important to be careful how you handle the soap when pouring into the molds. You want to be gentle and not incorporate a lot of air into the mixture. That is, unless you are going for this lemon merengue pie look to your soap! (I have to admit that it is kind of cool. The foamy layer is very soft, and almost like a marshmallow.)

I decided to use the translucency of this soap to my advantage, and made loofah soaps. The loofah serves as a gentle, natural exfoliant for bathing.

Add the loofah to the pvc pipe and weigh it down with something. (I used a spoon.)

Once in place, gently pour the soap into the pipe over the loofah.

When the soap has hardened, the easiest way to pull the soap from the mold is to put the pipe into the freezer for at least half an hour. Not only will this help solidify the soap, but it will slightly reduce its size long enough to help you push the soap out of the mold.

Carefully cut the soap into round bars and allow them to cure like you would any other bar of soap.

I’m sure somebody will ask me why the loofah soaps stayed white, while the other soaps turned yellow after during the curing process…

I wish I had an answer. I will say that they were from the same batch, and I didn’t add any colorants or any different ingredients to one versus the other. I poured the bar soaps first, and then filled up the pvc mold for the loofah soaps. If anybody has any ideas about why they aren’t the same color, I’d love to hear them!