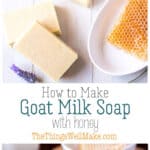 Gentle on the skin, and with a nice, creamy lather, this goat milk soap with honey is one of my favorites. Learn how to make soap with both milk and honey from scratch with this recipe. 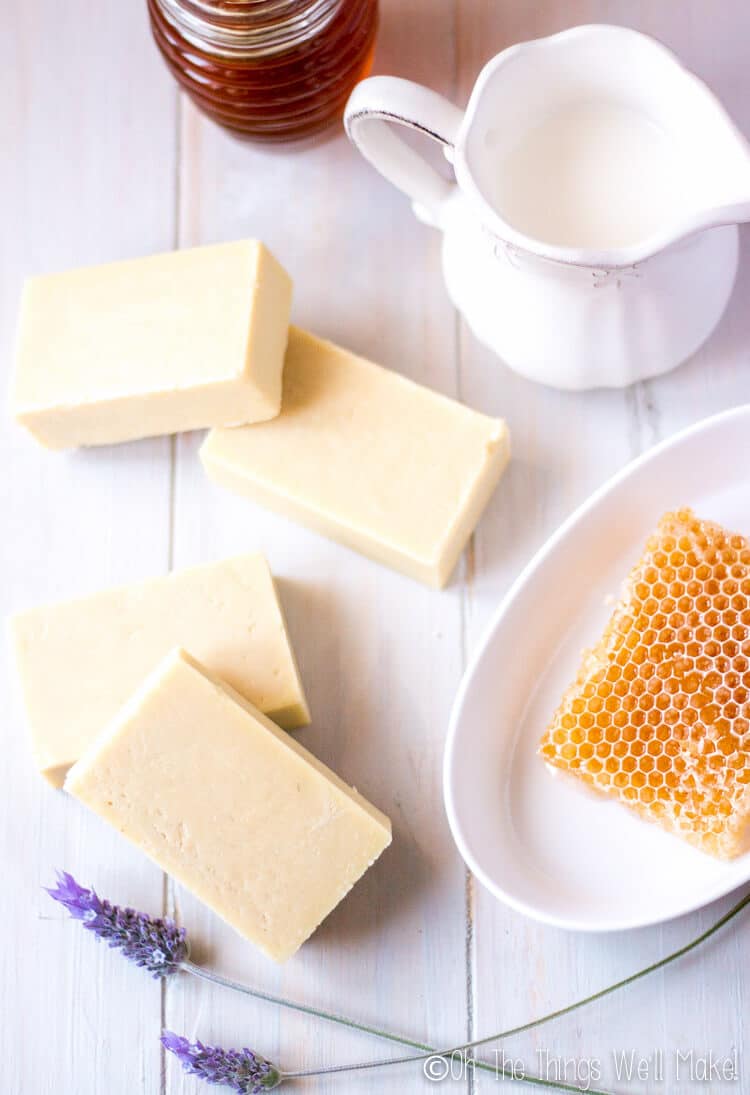 Many of you have been asking for either a soap made with goat milk or one made with honey, so I decided to kill two birds with one stone and teach you how to make a soap with both goat milk and honey.

Because of the sugars in both milk and honey, they do provide a slight challenge when using in soap making, but I’ll share my tips and tricks to ensure you end up with pretty, light-colored bars of soap.

Watch how to make this goat milk soap with honey

Using milk in soap is a wonderful way to make a soap that is gentle on sensitive skin. It can help with eczema and psoriasis, and also has a nice, creamy lather.

I introduced working with goats milk in my pumpkin spice soap recipe, which as really just an adaptation of the easy, beginner soap. So many people asked for a goats milk soap, though, that I decided to formulate a new recipe which focused more on it and the techniques that can be used when working with it.

Adding milk to soap without burning it

While not difficult, working with milks in soap making can be slightly tricky. You need to take a few steps to ensure that the milk doesn’t burn when you mix it with the lye. Even when making a cold processed soap like this one, the heat from the reaction of the water and milk with the lye can cause the sugars in the milk to burn if you aren’t careful, resulting in a not-so-pretty, dark-colored bar that may even give off an unpleasant odor.

There are a couple of ways to prevent the milk from scalding. Most people freeze the milk before mixing it with the lye, and that method has always worked well for me. The heat generated when you mix the lye together with the liquids will melt the frozen milk rather than burn it. Those who don’t want to bother with pre-freezing can choose to add the milk at trace instead. (Trace is the point in soap making when the lye has emulsified with the oils and the soap is ready to be poured into molds.) At trace, there isn’t enough lye left to cause a heated reaction when the milk is added.

One of the benefits of freezing the milk is that you could potentially use a higher percentage of milk in your recipe. If you want to add the milk at trace, you’ll need to use enough water or other liquid, apart from the milk, to make the necessary lye solution for making the soap before adding in the milk. 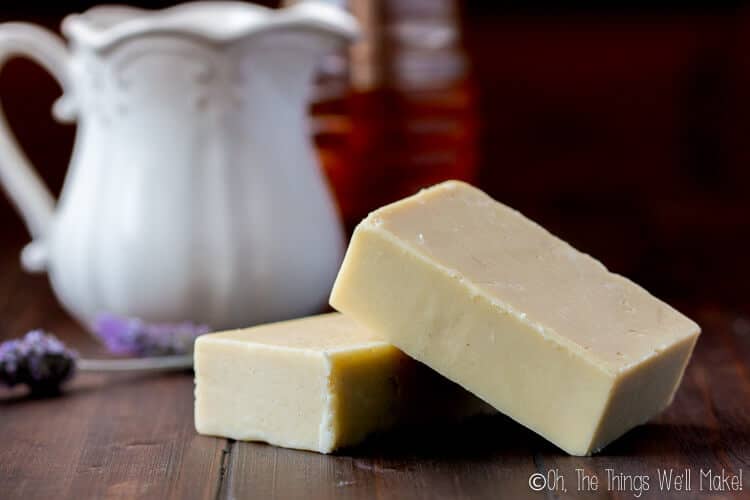 Should you try to reach the gel phase with goat milk soap?

If you aren’t familiar with the gel phase, it’s basically a point in soap making when higher temperatures are reached and the soap begins to look gel-like. You can recognize a soap that has reached the gel phase because it normally gets a slightly translucent look to it which often makes the soap also look slightly darker. Some people aim to get their soaps to the gel phase, especially when working with colorants so that their soaps show off brighter, more vivid colors. Gelled soaps also tend to get slightly harder more quickly, probably because the soaps lose more water from evaporation at the higher temperatures.

To reach the gel phase, soaps are usually either heated right after being poured into the mold or at least well insulated to keep their heat in for the first day or two. It depends a lot on the recipe and the climate you are working in what needs to be done to reach a full gel phase.

With milk soaps, I don’t recommend trying to reach the gel phase. Milk soaps are prone to overheating which can lead to dark bars of soap that don’t smell very pleasant. It is also very easy to end up with a partially gelled soap that looks dark in the center and lighter and more opaque on the outside. While partially gelled soaps can still be used, they don’t look as nice as a uniform soap that is either gelled or not.

How to avoid reaching the gel phase

To avoid getting a partially gelled soap, you can either work the entire process cold as I have and then leave your soap molds uncovered in a cool place, or you can move the recently poured soaps into the fridge or freezer to finish the saponification process. I made the soap in the pictures when it was still cold in my house, and I had worked with frozen milk and cold oils. I didn’t put my mold into the freezer or fridge and you can see that my soaps turned out uniform in color.

If you are working in a warmer environment, I’d recommend placing your soap in either the fridge or freezer for the first 24 hours after having poured the soap into the molds to prevent getting a partially gelled soap. 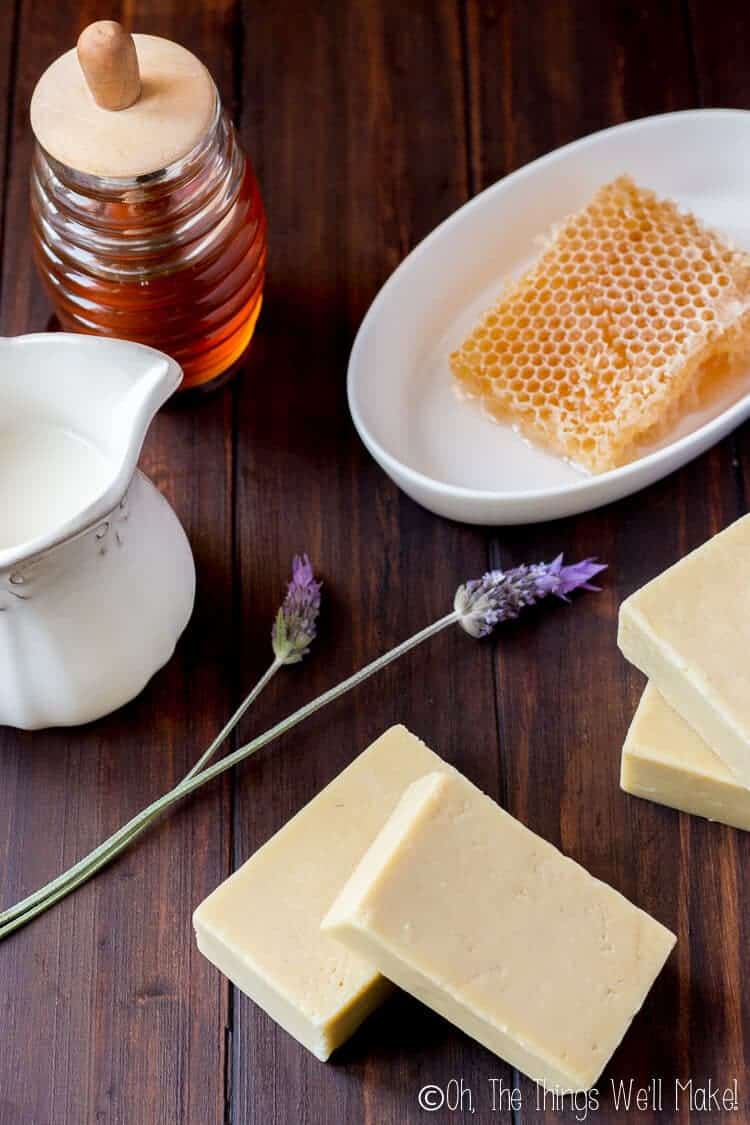 Honey is another nice additive for soap. The sugar in the honey helps make a nice, bubbly lather. While honey is nourishing for your skin, too much honey can result in a soft bar of soap (especially if you don’t account for the liquid in honey by reducing the amount of water in the recipe).

I, instead, add the honey as soon as the soap reaches a light trace, and haven’t had any problems.

One of the trickiest things about making soaps using cold ingredients is being able to recognize when you’ve reached “trace.”

Trace is the point in soap making when the oils and lye have emulsified and the saponification process begins. If you don’t reach trace, your soap won’t set correctly or may have pockets of oils and/or lye within the areas of the soap that have set.

Normally, to ensure you have reached trace, I’d have you blend until the soap thickens up slightly, almost like pudding. The problem with working with cold temperatures, though, is that the thickness of the soap mixture can be misleading. At cold temperatures, it may take a very long time to thicken up. On the other hand, if you’ve melted your coconut oil, it may begin to slightly solidify again as everything cools, making it appear that the mixture is thickening. This can lead to people thinking the mixture has reached trace when it hasn’t. This recipe doesn’t use enough coconut oil that I think that you’ll have problems with false trace, but it is something I wanted you to be aware of.

If you find your recipe isn’t thickening up after blending for several minutes, and you plan on pouring it into the molds at a light trace (thinner mixture), you’ll want to take special care to ensure that everything is well blended and that there are no streaks of oil anywhere in the mixture. (If in doubt blend for longer than you think you need to!) 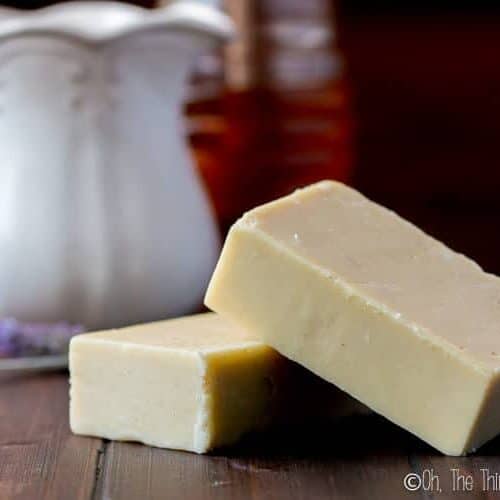 While making soap with goats milk and honey can present some challenges, it isn't really difficult to make once you know what you are up against!
Fills up a loaf pan for 8-10 bars of soap
4.54 from 15 votes
Print Pin Rate
Servings: 10 bars of soap
Author: Tracy Ariza, DDS