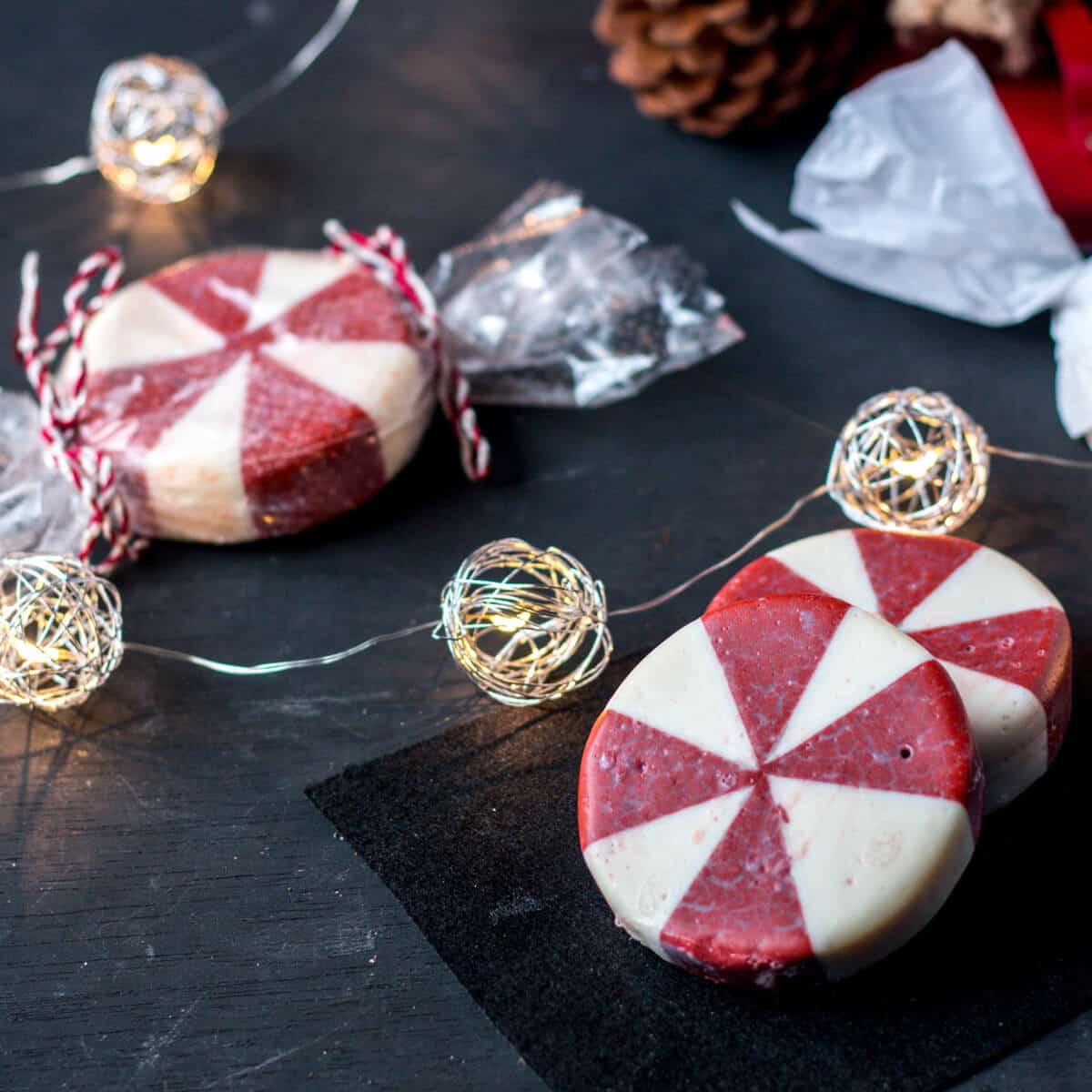 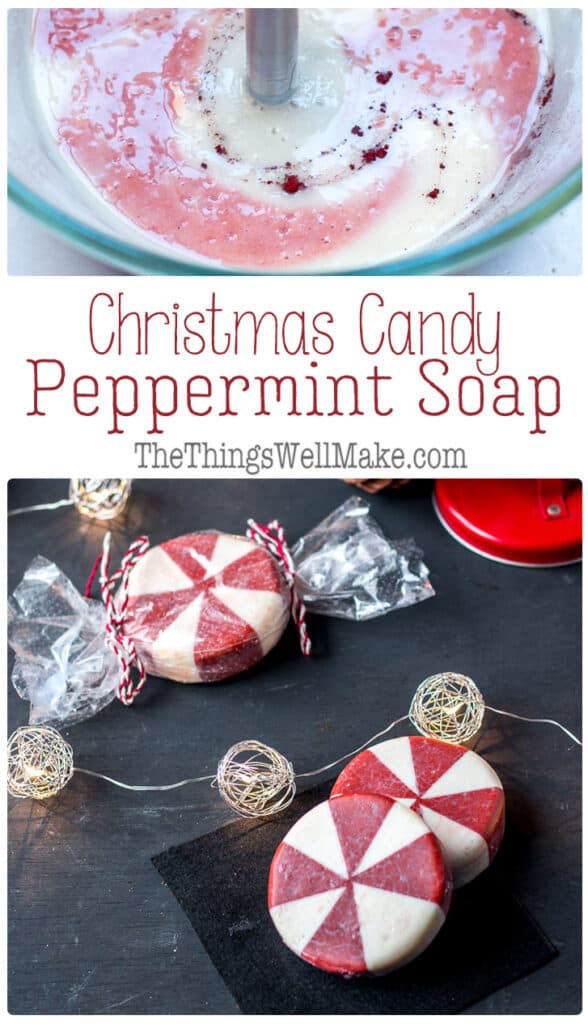 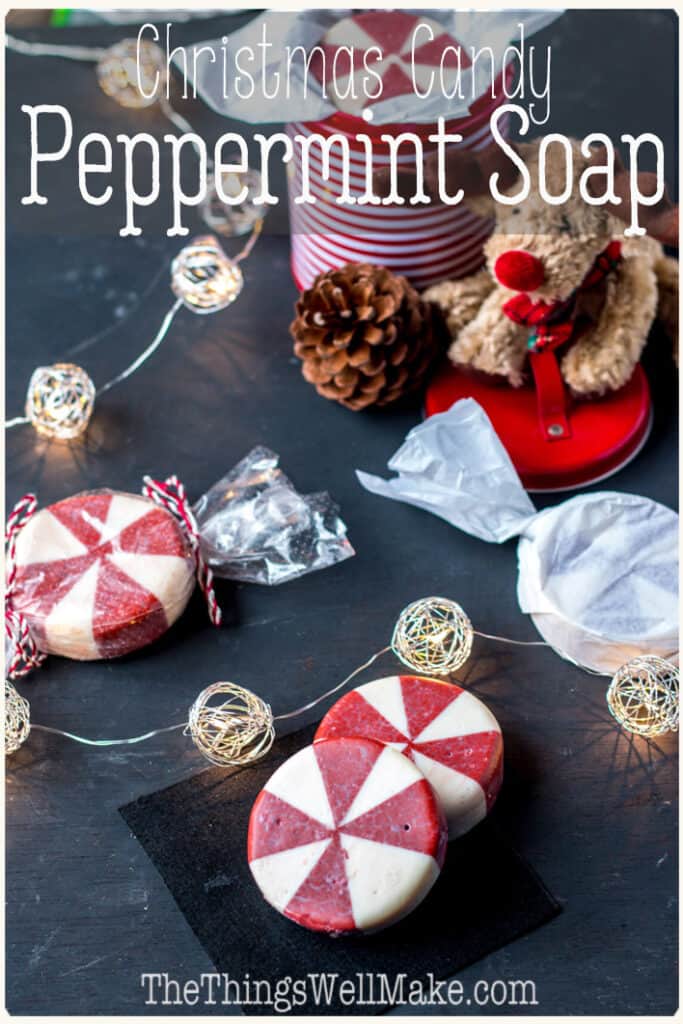 This fun holiday peppermint soap looks like peppermint candy. Its festive appearance makes it perfect for Christmas time, but that doesn’t mean you can’t enjoy using it year round.

This is one of those fun soaps that makes kids, or kids-at-heart, want to clean up. I made it as a bit of a challenge to myself, but found that in the end, it wasn’t that difficult. It was a great learning experience, and a lot of fun. I did make a few mistakes along the way, but you can learn from those and get perfect results.

Up until now, I haven’t shown you much in the way of coloring soaps, except for making soaps that were naturally colored because of their ingredients. I showed you how to make a black, activated charcoal face soap, and how to swirl in some spices in my pumpkin spice soap, but other than that, the soaps I’ve shared have been pretty natural looking. (If you’re new to making soap, you may want to start here with this easy beginner soap.)

I have done some experimentation with how to dye soaps naturally using mostly spices and clays, and will share a post about that soon, but today I’m sharing a soap recipe that uses a red iron oxide pigment to add a lovely shade of red to this peppermint candy inspired holiday peppermint soap.

What is iron oxide?

Iron oxide is a compound that is comprised of iron and oxygen, and is found in nature. That said, the iron oxides sold for cosmetics are usually synthetic because naturally found iron oxides often contain impurities made up of heavy metals like arsenic, cadmium, and mercury. While I normally try to choose everything as natural as possible, this is a case where the help of a laboratory isn’t all bad. Iron salts are mined, and then oxidized under controlled conditions within a laboratory to keep the heavy metal impurities out.

Most of the soaps that I have shared on this blog have been a light gold color due to the fact that I often use extra virgin olive oil in my soaps. Let’s face it, I live in Spain, and I can find a good quality extra virgin olive oil cheaper than just about any other oil that is good for soap making. Soap lasts a long time, so I prefer to spend a little extra and use the highest quality oils that I can find. The doesn’t mean that I don’t love the frugal idea of refining oils or using oils that  you don’t want to use for other purposes for making soap. I just don’t do it very often myself.

To get a white colored soap there are a few tricks to use.

What is a soap embed technique?

Soap embedding is adding something solid within your soap design. You may want to add a loofah within a soap for exfoliation, or embed toys into a transparent glycerin soap to make clean up time more fun for kids. The soap embed technique isn’t always about embedding objects into your soap, though, you can also embed different colored soaps into your main soap to get a pretty colored design.

In some cases, you may want to add little pieces or gratings of one colored soap within a different colored or transparent soap. In this case, I cut pieces of a red soap and set it up in a way that I could fill the empty spaces with a white soap to make a peppermint candy design. Once the soap sets, the different colored soaps fuse together into a pretty, colorful bar of soap.

Making a round mold for soap using PVC pipe

This was also the very first time that I experimented with using PVC pipe as soap mold.

You can make an inexpensive round soap mold using a small piece of PVC pipe that is sealed on one end with a bit of wax or parchment paper (or even some plastic from a plastic bag), held in place with a tight rubber band (or a silicone bracelet).

The only mistake I made was that I only had one small piece of PVC pipe lying around, so I tried making two layers of soap, one on top of the other, inside the same tube. The top layer of red soap pieces pushed the lower layer out of place, meaning that the bottom soaps weren’t as symmetrical or as pretty as the ones on the top. Had I had two pieces of pipe, I would have made the two layers separately, and I would have had much better results!

Understanding how to use this recipe

You will need to make the below recipe two times to get the results of my soap that looks like a peppermint candy. First, make the recipe below, adding in enough red iron oxide to get the desired color.

After allowing the soap to set for a day or two, you’ll need to freeze it, push it out of the mold, cut it into sections, and place it back into the mold again, this time leaving spaces between each section for the white soap.

You will then need to make the recipe again, this time adding in some titanium dioxide if you want to give the soap a brighter white color, and pour the white soap into the empty sections of the mold. After a couple of days, you can once again freeze the soap, push it out of the mold(s), and cut it into round bars of soap.

So, are you ready? 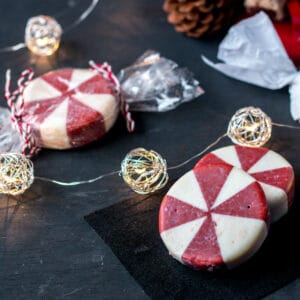 This fun holiday peppermint soap looks like peppermint candy and it’s perfect for Christmas time, but can also be enjoyed year round.
You will need to make this recipe twice to get the look of my peppermint candy soaps.
5 from 3 votes
Print Rate
Servings: 8 soaps (7cm diameter)
Author: Tracy Ariza, DDS

After several months, the white part of the soap started to turn yellow. I think the yellowing came from using a home rendered lard that wasn’t freshly made. I have since been making soaps with a refined tallow, and my soaps are staying white. You can switch out the lard for tallow, and it won’t make much of a superfat difference in the soap. If the lard is fresh, though, your soap is more likely to stay white. The scent of my soap had also greatly faded. The peppermint scent fades more quickly than lavender essential oil. I’d suggest adding more scent than what you think you’ll need to prevent the scent from disappearing. (I didn’t measure, but had used much less than the 8g called for in the recipe.)
Tried making this? Tag me today!Mention @thethingswellmake or tag #thethingswellmake!
Category: Christmas, Cleansers, Soaps, & Gels, Face & Body, Soap Making