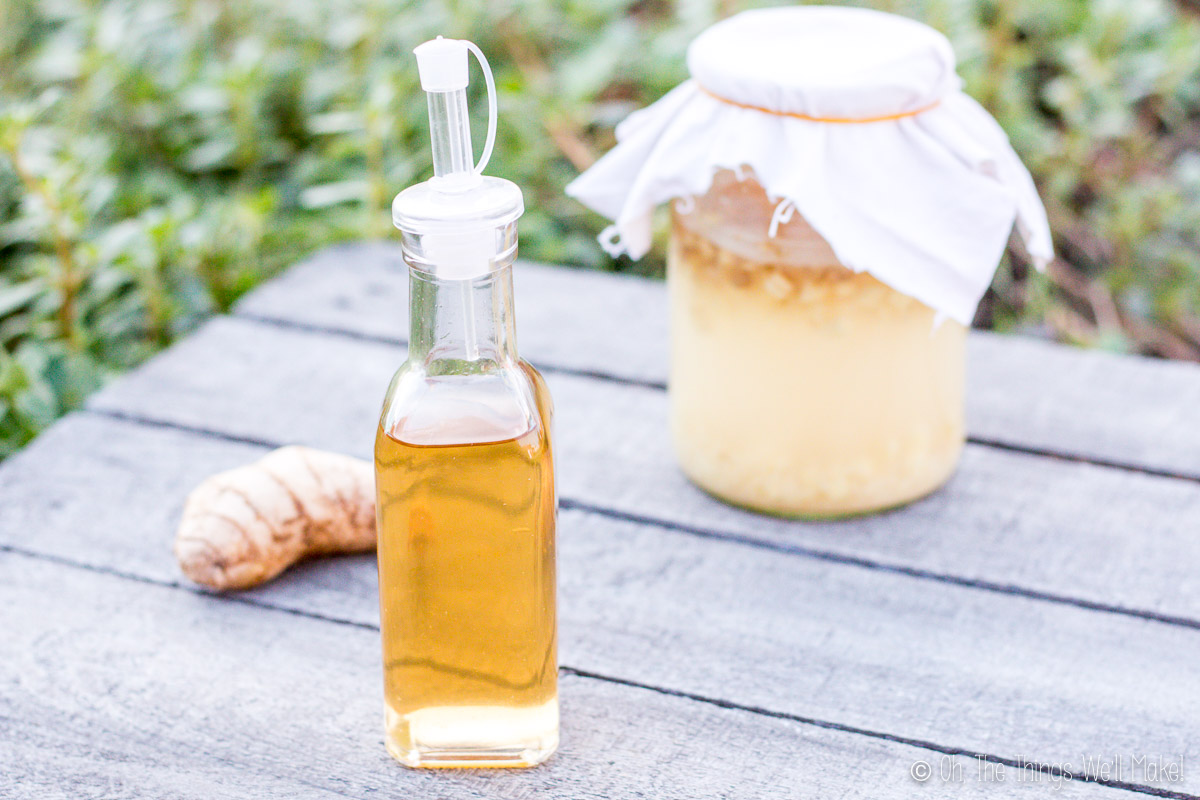 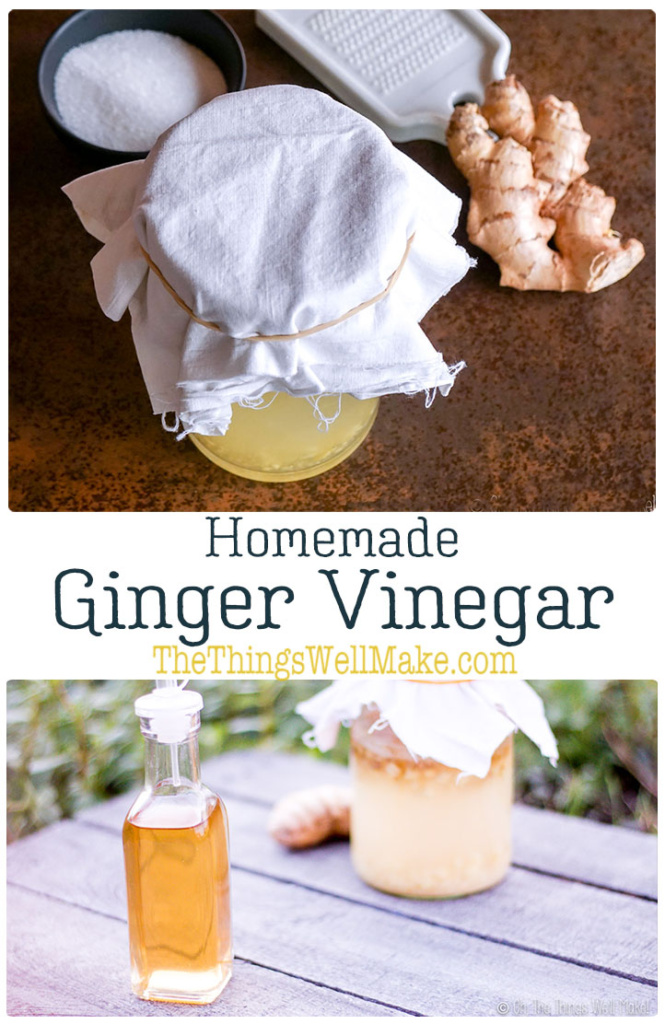 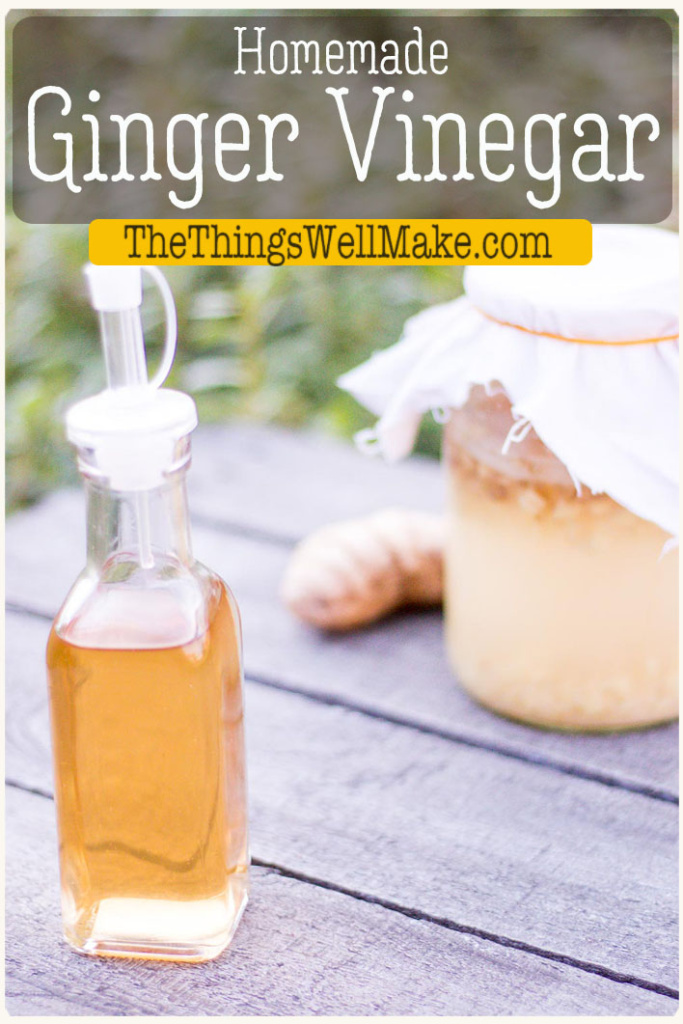 This easy ginger vinegar is mild and fragrant and is perfect for adding to salads and stir-fries. It’s simple to make and is delicious. For those who are looking for a more palatable vinegar, give this ginger vinegar a try!

Over the years I have fermented all sorts of things. At any given moment, you’d probably find my kitchen inhabited by a variety of substances in large mason jars covered with cloth. Right now you would find kombucha, soy sauce & miso (hopefully coming soon to the blog), kefir, apple cider vinegar, and, well, ginger vinegar.

Ginger vinegar was one of those things that I made by accident, much like kombucha vinegar and water kefir vinegar. I was experimenting with making a ginger bug and left it unattended for a few too many days. When you forget about these sorts of things and ferment them too long, you normally end up with vinegar. Sometimes the result isn’t very pleasant. I don’t like water kefir vinegar at all. Other times, you luck ut and end up making something wonderful, like this ginger vinegar.

While I made this ginger vinegar by accident the first time, I loved the result so much that I’ve purposely made it numerous times since. Ginger vinegar is absolutely delicious! Unlike some kinds of vinegar that are very strong and unpalatable, ginger vinegar is only mildly acidic. It has a lovely fragrance and flavor.

I especially love using it on salads and in stir-fries. It’s the perfect vinegar for making sweet chicken adobo. (I bet it would also be delicious in a ginger switchel!)

It’s not at all difficult to make, and it’s unlike anything you’d find at the store. While I also love making apple cider vinegar (and sometimes make wine vinegar with leftover wine), I have to say that this is my definite favorite!

The ingredients for this vinegar are simple. It uses fresh ginger root, filtered water, and sugar.

While I normally prefer using unrefined sugar for most recipes, I generally use white sugar for my ferments. Most of the sugar will get consumed by the fermentation process anyway, so try not to worry about it too much.

It’s important to use fresh ginger root and not dried powdered ginger. If using organic, you can choose to peel it or not. I usually just remove any dark areas or anything that looks like mold. When peeling, I like to leave little bits and pieces of peel that can help introduce local yeasts and bacteria into the ferment.

When I first published this post, I showed you how to make a ginger bug and then convert it into vinegar. Since then, I have tried to simplify the process, showing you an easier way to make large quantities of vinegar. I figured that unless you also wanted to make some ginger bug sodas, there was no need to go through the hassle of growing an active ginger bug first.

In the end, the results of each method were quite different, so I figured I’d share both and let you try and choose for yourself. While I like the ginger vinegar that results from an abandoned ginger bug, others may prefer the more pungent ginger obtained in a more traditional vinegar-making process.

What is a ginger bug?

A ginger bug is a ferment made in a similar way to a sourdough starter. It’s made by mixing sugar, minced garlic, and filtered water in a jar and leaving it to ferment. Each day, you add more sugar and ginger to the mixture. With time, the wild yeasts and bacteria in the air feed on the mixture and ferment it into a bubbly, active starter that is usually used to carbonate probiotic sodas.

If you’re interested, I have a post dedicated to making an active ginger bug and making sodas with it.

As I mentioned before, the first method begins with making a ginger bug. To make a ginger bug, a mixture of ginger, water, and sugar is fed with more ginger and sugar every day until it gets bubbly. That usually takes around a week, but it depends a lot on the temperature.

Once you have an active ginger bug, you can use it to make sodas or ginger beer.

At that point, you can continue to add ginger and sugar daily (and a bit of water every once in a while) to keep the ginger bug active. Or, you can abandon it, leaving it at room temperature without adding anything new.

With time, the leftover sugar will be consumed, and the mixture will become acidic.

If I intend to make vinegar with my ginger bug, I purposely add more water, sugar, and ginger to the active ginger bug before abandoning it. This allows me to make a bigger batch of vinegar.

After a week or two (more or less), a white film will form over the top of the liquid. It looks like a kombucha SCOBY, but in this case, it is the vinegar “mother.” Once the mother starts to form, I try not to disturb it too much.

Vinegar and kombucha both form a mass of cellulose and acetic acid bacteria. In the case of vinegar, it’s called a mother. In kombucha it’s called a SCOBY or a symbiotic culture of bacteria and yeasts.

After a couple more weeks, I begin to taste the vinegar for acidity. (I usually pull the mixture up with a straw from the edge, trying not to disturb the vinegar mother if possible.)

At first, the ginger vinegar will be both sweet and acidic. At this point, it’s delicious on spiralized cucumbers for a refreshing cucumber noodle salad!

If you leave it for longer, though, you’ll end up with a more acidic vinegar. Even months later, though, the resulting vinegar made in this way tends to be on the sweeter and less acidic side, much like mild rice vinegar.

While that method is easy enough, I decided to try an even simpler method of making larger batches of ginger vinegar.

In this other method, rather than feed the ginger and sugar mixture each day, we can begin with larger amounts of water, sugar, and ginger and allow them to ferment without adding anything. This is a more traditional way to make vinegar. (It’s how I normally make apple cider vinegar.)

Over the last weeks, I’ve been making both methods simultaneously. I thought that the second method would be faster because the focus is on making vinegar right from the beginning. I was surprised, though, to see that the ginger bug method formed a mother much more quickly.

Only a few days after stopping the feeding of my active ginger bug, the mixture formed a white film that thickened into a thicker mother over just a few days. The other batch of vinegar hadn’t even started to form a mother yet. I guess that adding sugar and ginger daily helps activate the yeasts and bacteria that work to form the vinegar.

Another difference that I noticed is that the finished batches of vinegar tasted different. The vinegar made from a ginger bug was sweeter and milder. It is light and refreshing, with a hint of the flavor of ginger, of course! The other vinegar was more potent. It was more pungent and acidic. In a way, it strangely tasted more like apple cider vinegar.

After trying both methods, I have to say that I prefer the first method. Adding sugar and vinegar daily for around a week isn’t difficult, and it seems to be enough to speed up the vinegar-making process. It also makes a sweeter, milder vinegar that I really like. (I’m now tempted to try a similar method for making apple cider vinegar!)

Filtering and storing the vinegar

To use your vinegar, you’ll want to filter and bottle it up. Once the mother forms, you can start tasting the vinegar for acidity. Try easing in a straw along the edge to taste the vinegar without disrupting the mother that helps protect it.

Once you are happy with the acidity of the vinegar, stop the vinegar-making process at any time by filtering out the solids and bottling up the vinegar.

Some people prefer to leave it in the fridge to almost completely halt the fermentation process. I don’t find refrigeration necessary and leave mine at room temperature. It does gradually intensify with time.

To jump-start your next batch, add the mother and a small amount of vinegar from this batch to more water, sugar, and ginger. Continue with either of the methods above.

Another option is to do a sort of continuous vinegar brew by removing small amounts of vinegar and adding in more water, sugar, and ginger to keep the process going. This also keeps the vinegar sweeter and milder. 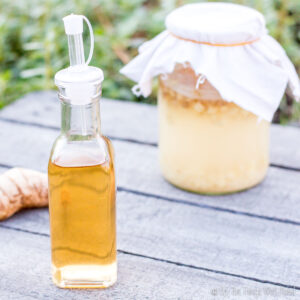 This easy ginger vinegar is mild and fragrant and is perfect for adding to salads and stir-fries. It's simple to make and is delicious. For those who are looking for a more palatable vinegar, give this ginger vinegar a try!
5 from 7 votes
Print Pin Rate
Prep Time: 10 minutes
fermentation time: 21 days
Total Time: 21 days 10 minutes
Servings: 64 tablespoons
Calories: 11kcal
Author: Tracy Ariza, DDS

Nutritional information is calculated based on the ingredients, but not taking into account the fermentation process. As the bacteria and yeasts feed on the sugar, the resulting vinegar may have a slightly different nutritional profile.  A mother forms more quickly using the ginger bug method. It also makes a milder, sweeter vinegar.

How to Make a Ginger Bug
Next Post: Fermented Ginger Beer