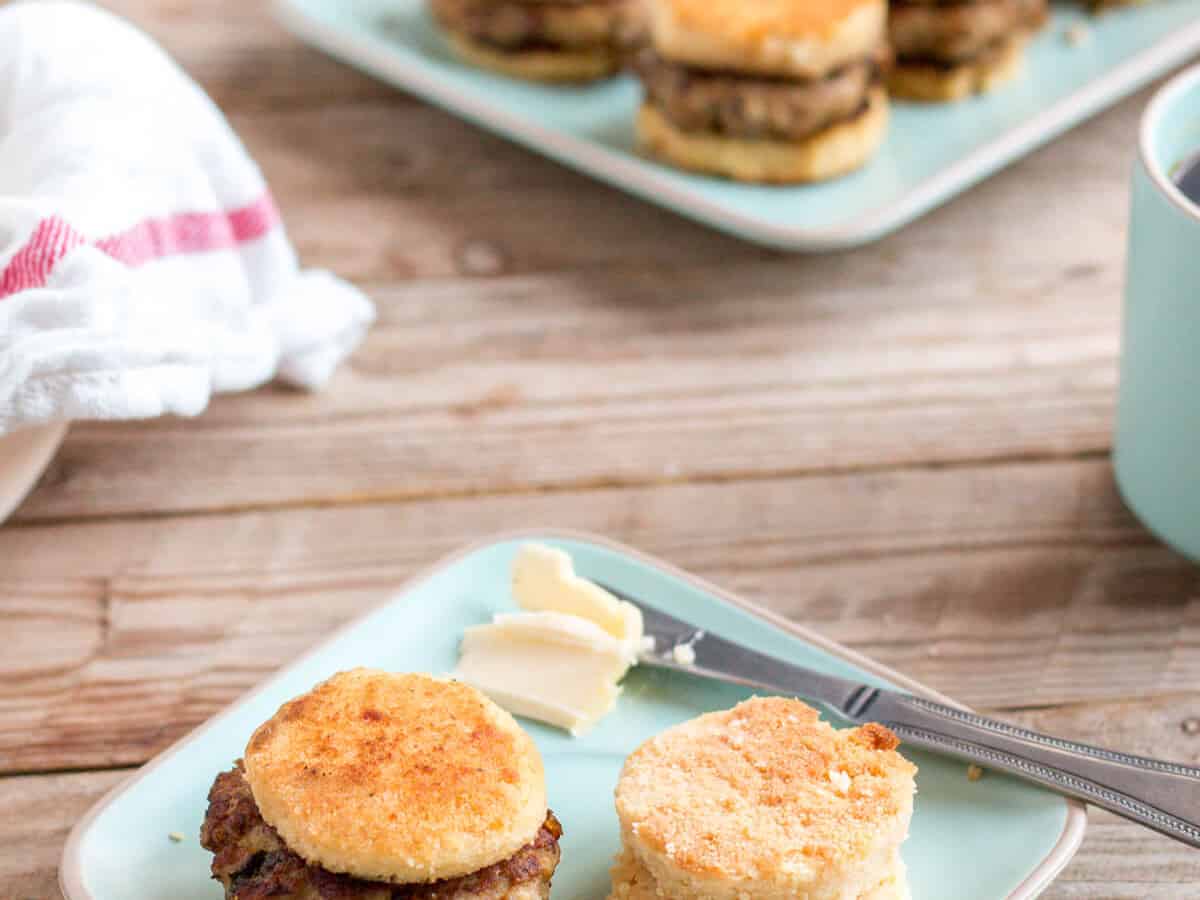 How to make Sausage Patties and Homemade Sausage Biscuits 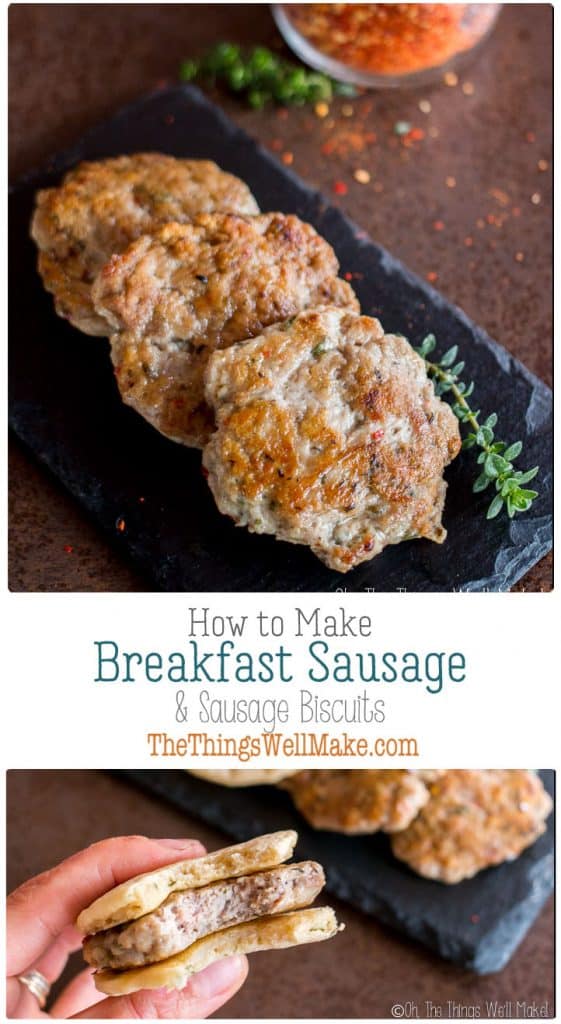 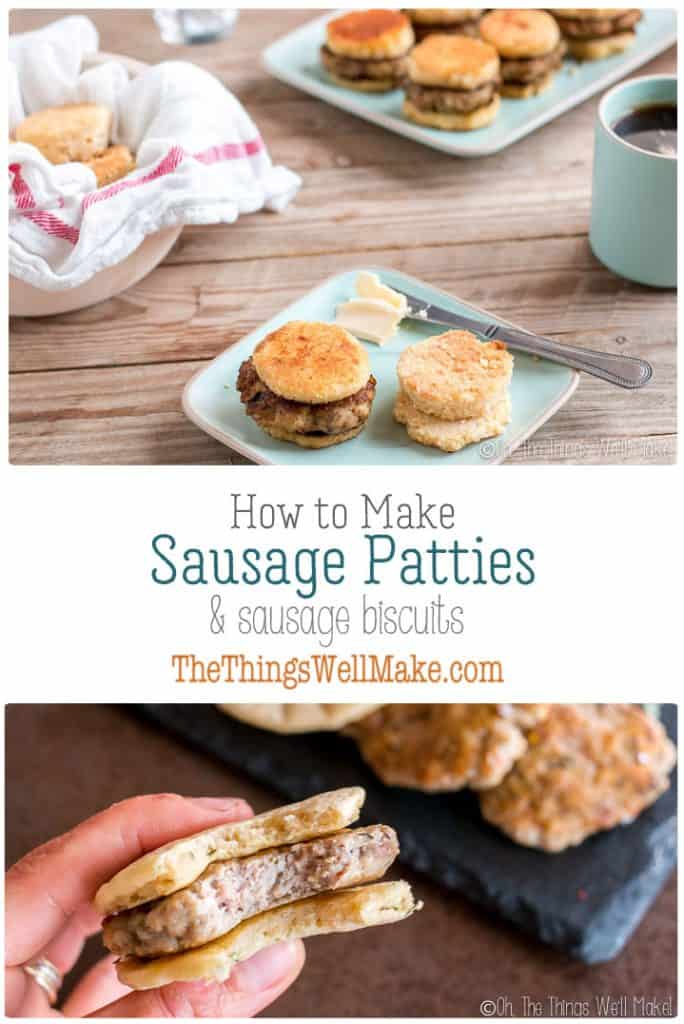 Homemade sausage biscuits are a tasty treat, especially when you know how to make sausage patties. They are super simple to make, and you can make them ahead and freeze them to have them ready at all times.

While it might not be one of the healthiest things that I crave, sausage biscuits are something that I do occasionally miss living here in Spain. They just don’t exist here. The only place that I think might potentially eventually have them here is Mc Donald’s. Over the years some Mc Donald’s restaurants have begun to serve breakfast, but sausage biscuits aren’t on the menu. In any case, I’d prefer not to eat them there.

You already know that I like to be able to control what is going into my food, but this is especially true with something like sausage patties where it’s easy to sneak in all sorts of unnoticed ingredients. Most sausage patties are loaded with MSG to give them extra flavor.

While this isn’t a recipe for something that I think you should be eating every single day, it does satisfy an occasional craving in a way where you can control all of your ingredients.

When I originally wrote this post, I didn’t really provide a recipe for how to make sausage patties. I basically only gave you a list of herbs and spices that I like to add to mine, and was just going to let you experiment for yourself.

While I do think it’s best for everybody to experiment with recipes and tweak them to their liking, I am now adding a recipe for how to make sausage patties to serve as a starting point. Some people will prefer more cayenne, others will prefer more salt. My recipe should show you that it is super easy to make sausage patties at home, so once you get over the intimidation factor, you should be able to play with the recipe and make it your own.

How to make the sausage patties

Here in Spain pork, especially ham, is very popular, and there are many types of sausage available. From chorizo to salchichón, and morcilla to fuet, you would think that finding a sausage for a sausage biscuit would be easy. None of the common sausages, though, are really anything like American breakfast sausage, and it is rare to see a sausage patty of any type.

I mistakenly thought that making sausage would be a huge ordeal, and wasn’t brave enough to even check out any of the recipes. I figured you would need all sorts of special equipment that I didn’t have. I did eventually figure out a method to make sausage links when I learned how to make Spanish chorizo. While it is true that for making sausage links specialized equipment would be very helpful, making sausage patties is just as easy as making hamburger patties!

All you really need is some ground pork instead of ground beef.

Many recipes had added fat ground in, but I found it to be unnecessary and actually overwhelming in this type of sausage recipe. It just made them more greasy. So, the second time I made myself sausage, I just bought around a half kilo (around a pound) of pork shoulder and had them grind it for me. That cut of pork already has some fat, so it worked well in the recipe.

Once you have your ground pork ready, you just need to season it. I tried out a few recipes, and most added some sort of sweetener like maple syrup or sugar. I personally found them all to be too sweet. So, after a few trials, I came up with a mix that I liked. I usually use fresh herbs from my garden, and basically just throw in a handful of each herb, which is what made it hard for me to actually write out a recipe. Since then, though, I have played with dried herbs and came up with the mild recipe above. You can definitely add in more herbs and spices to give it more of a kick! You can also add in some home-rendered lard, especially if using a leaner cut of meat. It nicely takes the place of the added ground up fat.

How to make Breakfast Sausage Patties 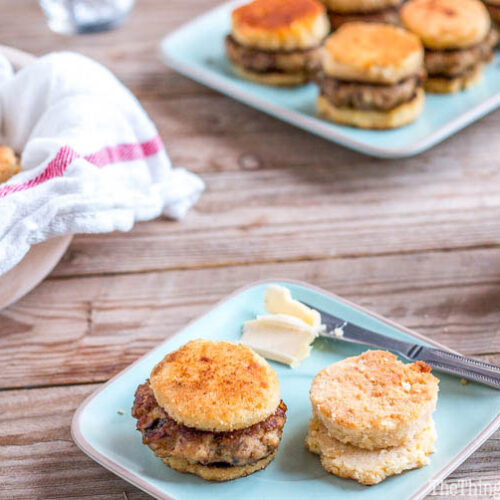 how to make Sausage Patties

Before frying the sausages, you should prepare your biscuits.

You could use biscuit mix or something like that, but I told you that these sausage biscuits would be completely from scratch. We don’t have biscuit mixes here in Spain because, frankly, most people here have never seen a buttermilk biscuit. Those who think they know what a “biscuit” is, are probably picturing what most Americans think of as a “cookie.” We can thank the nearby Brits for that!

The first time I made these biscuits, I used a traditional roll and cut buttermilk biscuit recipe.

It turned out well, but the next time I decided to try using an old favorite recipe of mine for butter dip biscuits. They are buttermilk biscuits where the dough is pressed into a pan over butter and then cut and baked. I love the method because, since you don’t handle the dough much, the dough inside is light and fluffy. Plus, they are a lot less messy to make, because you don’t need to use a rolling pin. They are a bit messier when eating, though, because of all of the butter. I originally included my recipe for butter dipped biscuits in this post, but have since taken them out while trying to make the conversion to a gluten-free blog. I do want to give options to those who want traditional wheat biscuits, though, so I’ve left a link to my old recipe on the Wondermill Grain Mill Wagon blog.

Since then, I’ve been working on a grain free butter dipped biscuit. So far they are turning out well, but I want to perfect the recipe a little bit before posting it on my blog. As soon as I’m sure that I’m happy with the recipe, I’ll post it and link to it here!

Meanwhile, I’d like to show you another quick and easy option: my homemade paleo pitas. They’re like making mini pancakes, and they work as a great bread alternative to normal, wheat-based biscuits.

Finishing off the homemade sausage biscuits:

Once you have the biscuits ready, brown the sausage over medium to high heat in a saucepan on the stove. Cut the biscuits in half, and slip in one of the sausage patties. You can add a bit of omelet style egg, too, if you are so inclined. I added it for my husband and son, but prefer it plain myself.

I hope you enjoy them as much as I do!