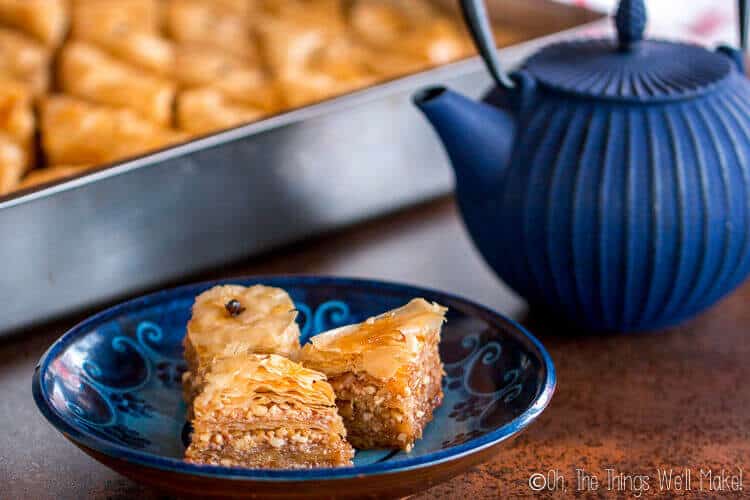 Perfect for the holidays, baklava is a sweet, flaky and impressive looking dessert that is actually simple to make and sure to please your guests. Learn how to make baklava with this Greek baklava recipe. 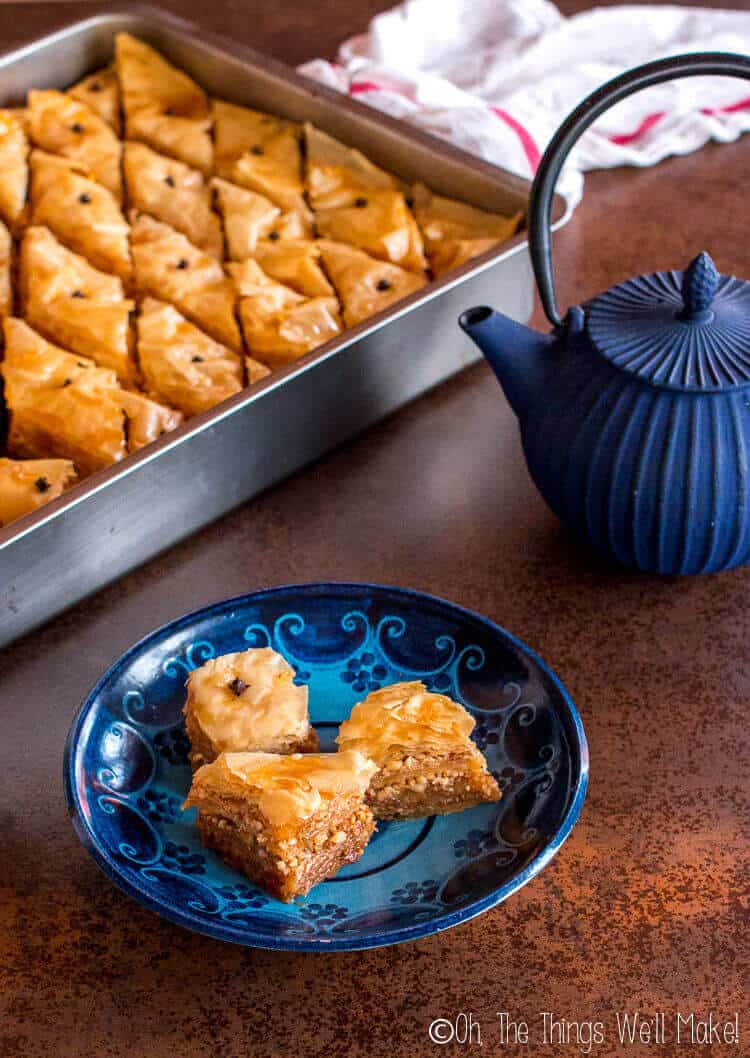 Way back when, when I was still living in Michigan, we had Greek neighbors in the house next door. At Christmas time, Crissa, our next door neighbor, used to give my mom a small plate of homemade baklava each year. I ended up usually being the one to eat it all because it was one of my favorite desserts. And it wasn’t easy to find anywhere.

Baklava is a layered Middle Eastern dessert that alternates layers of crispy filo dough with layers of ground nuts and sugar. The whole thing is held together by a sweet, tangy syrup.

The people of many countries claim baklava as their own. It may have originated in either Greece or Turkey, or perhaps long ago in Assyria which is now part of Turkey, Iran, Iraq, and Syria. Because people have been making this dessert for so many years, nobody really knows its true history. I have read that they probably began to make baklava as we know it now in Instanbul, Turkey. That said, that recipe was probably a variation of a traditional Greek recipe that may have included cheese.

Regardless of where it came from, baklava is a popular dessert in many parts of the Middle East and the surrounding regions. I’ve seen lots of different variations in the shape and presentation, and also of different mixtures of nuts and other fillings between the filo layers.

No matter how it’s made, though, it’s delicious!

Once my neighbor learned how much I loved it, she offered to show me how to make baklava so that I could eat it whenever I liked.

One year at Christmas time, I found myself in her kitchen with all of the ingredients to make my own batch of baklava at her side as she made hers.

She had worked ahead, and had made a huge batch of sugar syrup for both of us before I got there. 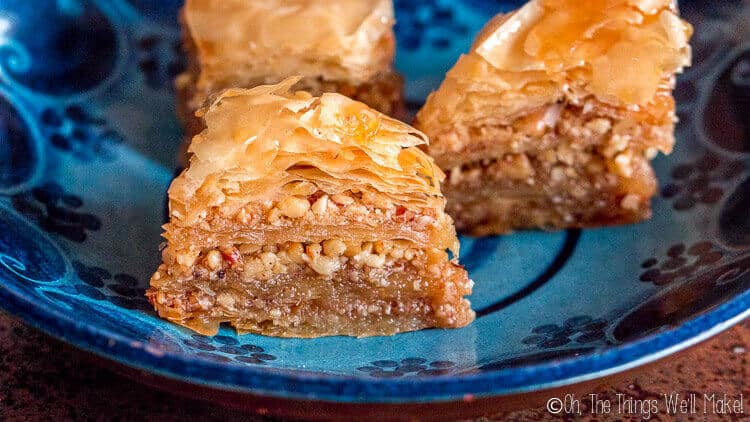 How to make crispy baklava

According to her, the syrup has to be cool when poured on the still hot pastry in order to keep the pastry crisp. I’ve since heard that you can also do it the other way around, meaning you pour the hot syrup over the cool pastry, but I’ve never personally tried it. Most people say that you’re supposed to avoid having both be cold or hot. I did read a comment from someone who claimed that the shops in Instanbul pour hot syrup on hot baklava as the method of choice, but I’ve never heard that elsewhere nor have I tried that either. I’ve always followed the general consensus and prefer to not risk ruining a nice pan of baklava testing it out. (I am curious to hear comments from those that have tried, though.)

Another trick to making a crispy baklava is to make sure that you lightly butter each sheet of filo pastry. You want it completely covered, but don’t want to add so much butter that you’re bathing each sheet in it.

More importantly, though, is to make sure you are using a clarified butter. I use homemade ghee when making baklava. (See how to make ghee from butter.) You only want to be using the fat component of the butter. If you just melt the butter without clarifying it, you’ll also be spreading the liquid component of the butter on the filo sheets, and that will make for a soggy baklava. 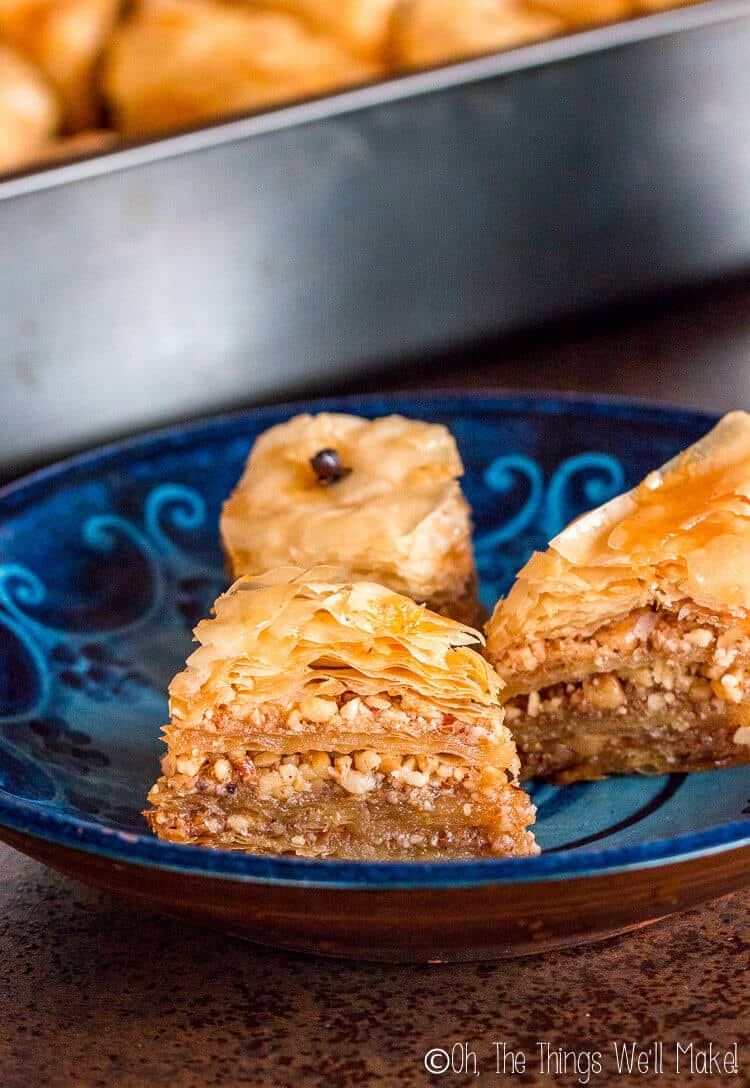 I’ve since read more about Greek baklava, and its different presentations. For example, I read on Wikipedia, that according to the book, The Real Greek at Home, Greek baklava is supposed to have 33 layers, symbolizing the years of Christ’s life. On the other hand, our neighbor used around 40 sheets of filo in her recipe, and despite being a strong Christian, she never made mention of that symbolism.

I’ve also read that in Greece, many people use olive oil between the layers of filo, but my neighbor’s recipe used clarified butter. I stuck with her recipe this year for Christmas, but may try making baklava someday with olive oil out of curiosity.

While this is a Greek family baklava recipe, I’m sure there are many variations of this sweet treat all over the country. I’d love to hear the input of people either from Greece or living there as to what is most commonly seen nowadays.

Why am I sharing a recipe that isn’t gluten free?

While I know many of you follow this blog because I normally share gluten free, grain free, or even paleo recipes, others look to me for traditional recipes and pantry basics. I almost never posted my attempt at making Turkish delight on the blog, because I didn’t feel like it fit in with the sorts of recipes that you expect from me, but it has grown to be one of my more popular posts.

I don’t make these sorts of recipes often, but this was a special recipe that I’ve held onto over the years, and thought it deserved being shared.

Plus, I have been experimenting with adding small amounts of gluten back into my diet occasionally. Christmas was the perfect time to do that sort of experimentation because I reserve these sorts of recipes for special occasions. While baklava is actually quite simple to make, it is a bit time consuming. Plus, while delicious, this isn’t the sort of food I want to be eating every day. 😉

How to Make Baklava

How to make Baklava 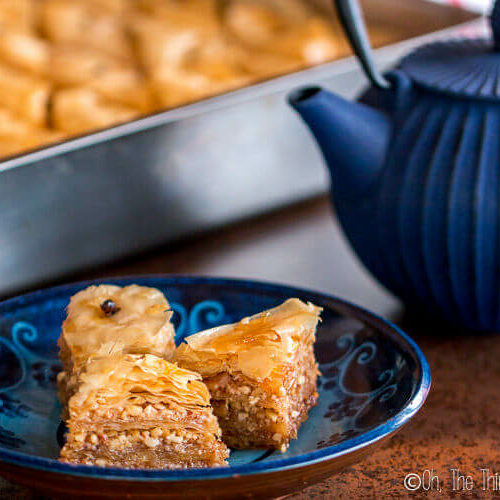