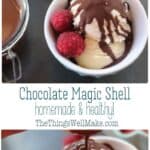 I’ve been updating some of my recipes lately and putting them into a recipe plugin that makes it easier for you to save and print my recipes, which means I’m going through some old posts and fixing them up a bit.

I have decided to begin with my homemade Magic Shell recipe because last time it was a bit hidden in my post about kefir “ice cream,” losing the protagonism that it really deserves. Plus, I have been playing with the recipe somewhat, and have found a new way of making it without a chocolate bar for people who are avoiding the emulsifiers or who just don’t have any on hand.

What is “Magic shell“?

“Magic shell” is a “magic” ice cream coating that starts as a liquid, but turns into a hard shell when cooled by the frozen dessert of choice.

The idea seems so impressive that you would think it would be impossible to make.
Nothing, though, could be further from the truth.
Magic shell is one of the easiest things you could ever make, and it only uses two ingredients: chocolate and coconut oil.
The nice thing about making it yourself is that you control the ingredients; you can use whatever chocolate you prefer. That means that if you are vegan or avoiding dairy or soy, you can choose a chocolate bar that fits your dietary needs.
Coconut oil has so many uses that I go through several quarts a year. It is great for hair, skin, frying, cooking, …
This, though, has to be the most fun of its uses. It takes advantage of the fact that coconut oil is liquid above 76ºF (24ºC), and solidifies below that temperature. Keep in mind that virgin coconut oil will add a coconut-ty flavor to your magic shell. I, personally, quite like it, but a lot of people don’t. For those who don’t, use expeller pressed coconut oil.

Now, for those who don’t want to use a chocolate bar:

When I made this, I used maple syrup. I imagine it will work the same way with honey, but I haven't actually tried it. I did try using some coconut sugar to see if it would dissolve into the mix; it didn't!!
So, Don't use granulated sugar!!
Your mixture won't completely combine and will probably separate a little between uses. Just shake it up to mix it together before pouring it on your ice cream. Even when it separates a bit, it still works.
Tried this recipe? Tag me today!Mention @thethingswellmake or tag #thethingswellmake!

It doesn’t look quite as smooth as the first version, but it does work. My husband didn’t even notice the difference.

In the winter, your magic shell will most likely be solid, so you should warm it up in a warm water bath before using it. Most people eat more ice cream in the summer, though, when that isn’t a problem.

So, how do you use your homemade magic shell coating?

Just spoon it over your ice cream, or any other frozen dessert (how about frozen bananas?!?), and wait. It will start to harden.

Now, all that’s left to do is to eat it!