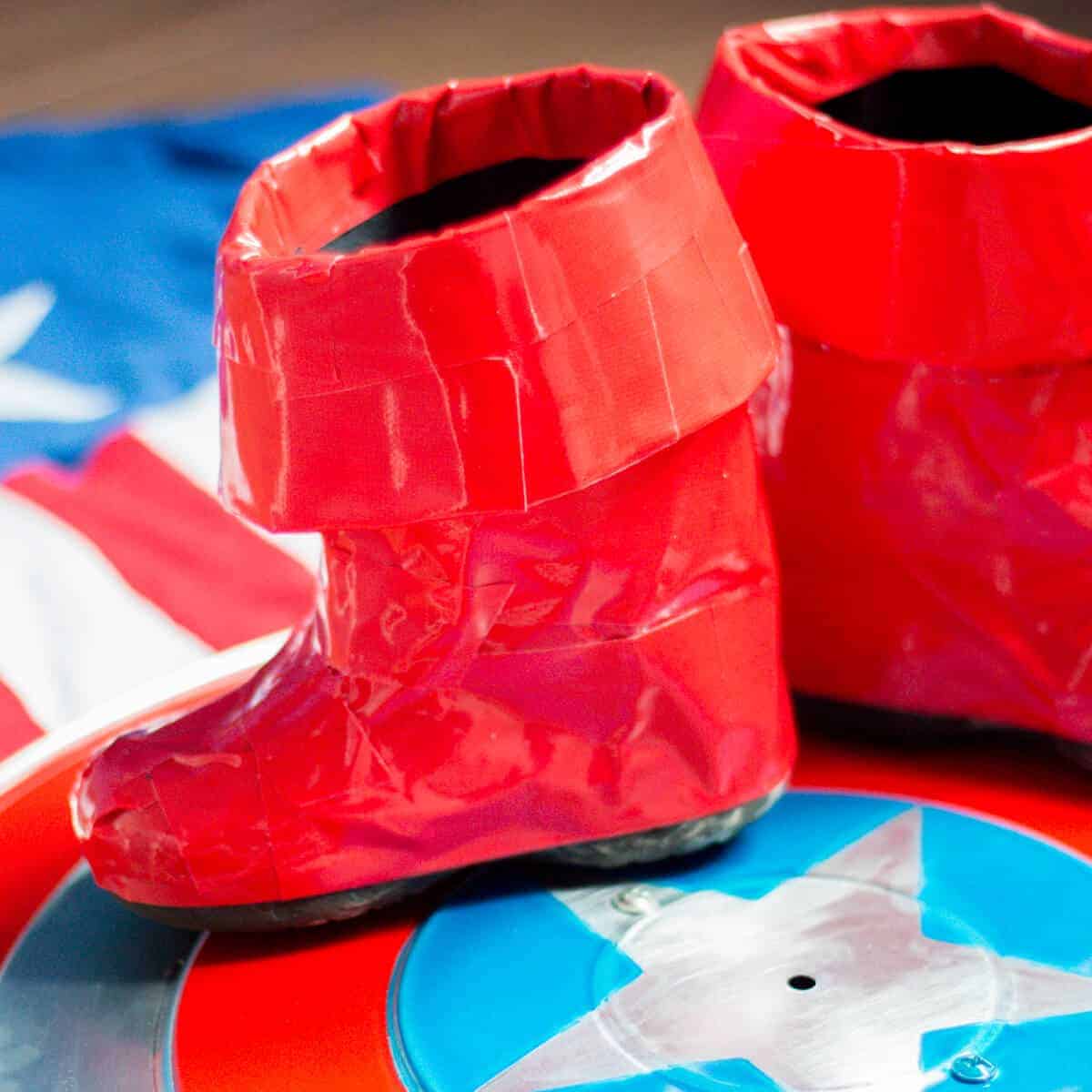 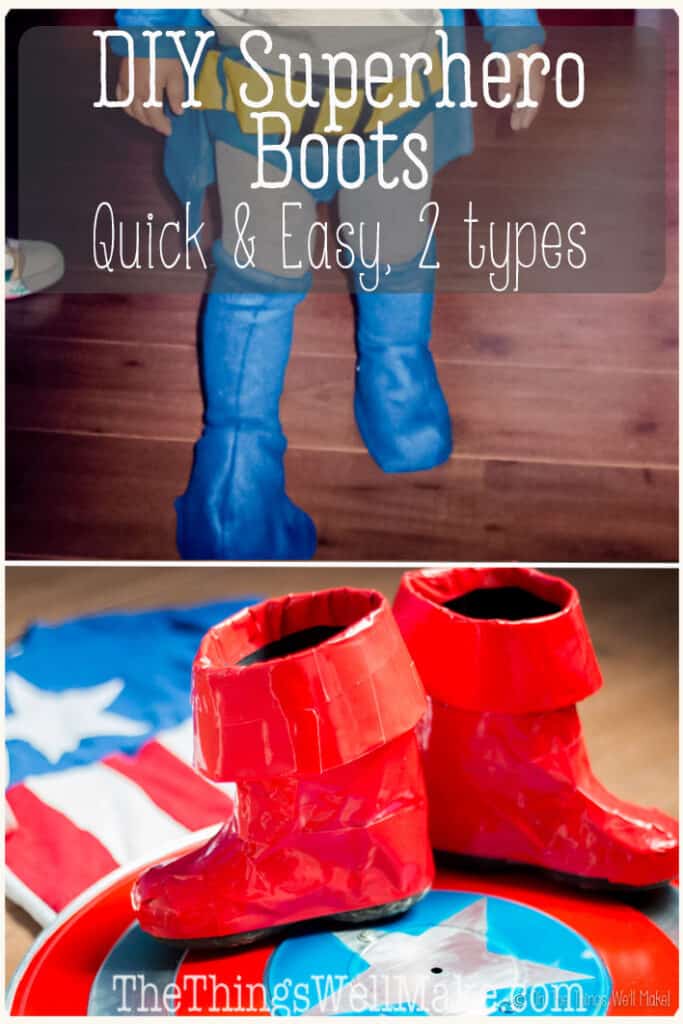 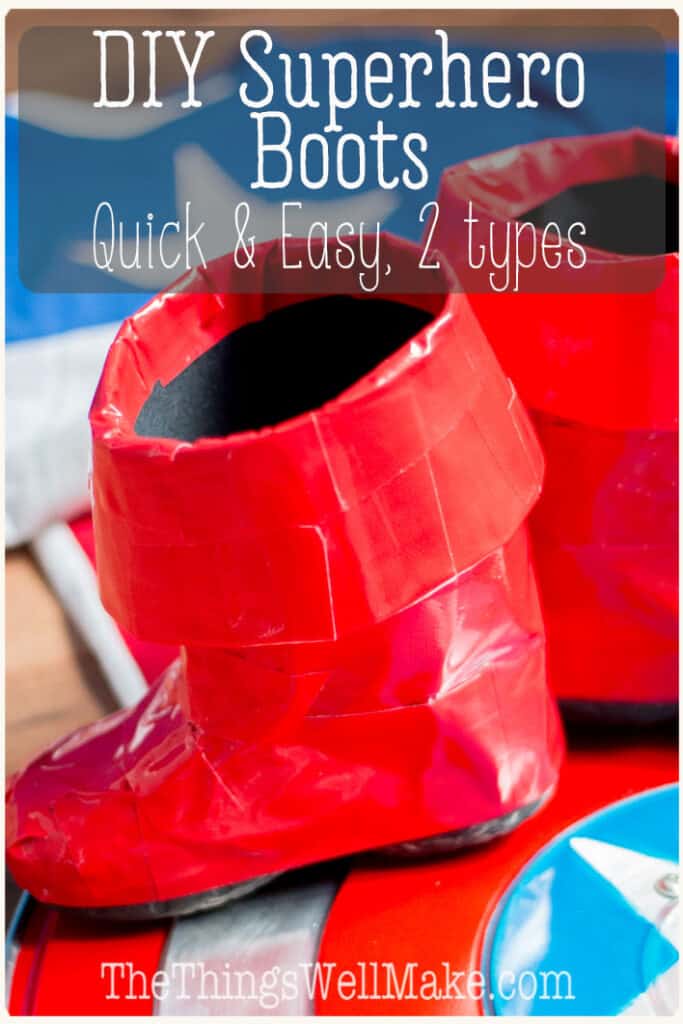 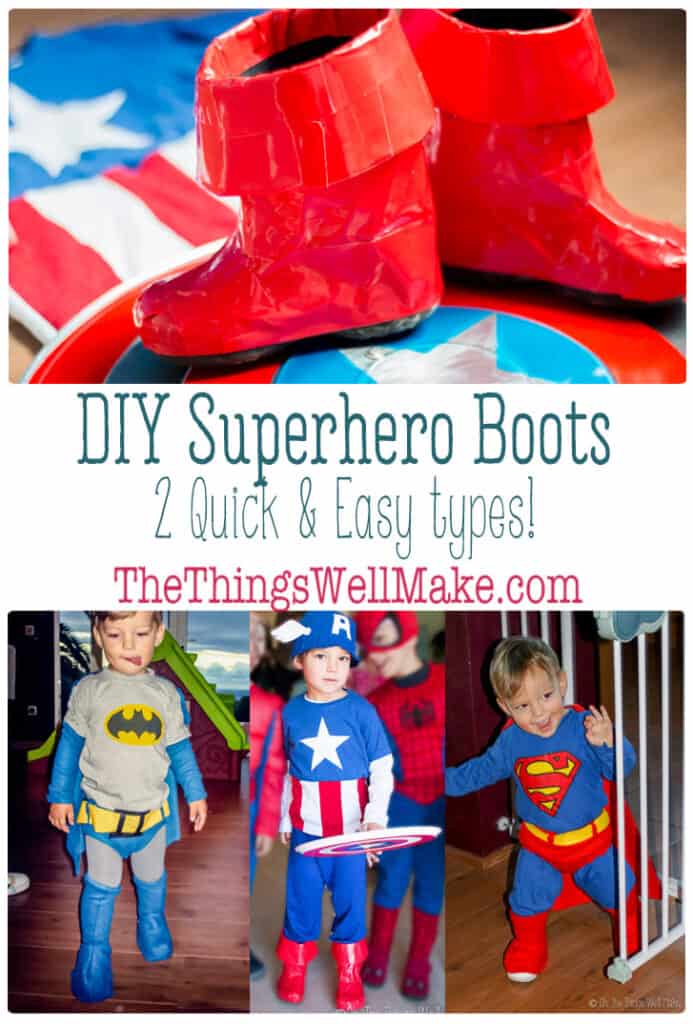 No homemade superhero costume would be complete without some DIY superhero boots. I’ll show you two quick and easy methods to make costume boots in a flash.

Over the years, I’ve made many a superhero costume for my son!

I’ve already shown you how I made him a Captain America costume, complete with a homemade Captain America Shield. I also showed you how to make a Thor costume using craft foam.

One thing every superhero needs, though, is superhero boots!

When my son was only a year old, I made him his first superhero costume, a Superman costume. He was so small at the time, that I was able to make the entire costume (shirt and pants) out of one of my husband’s old t-shirts!

Making pants out of an old t-shirt isn’t as difficult as you might think. (This tutorial will show you how to make kids’ pants from a t-shirt.)

I didn’t really know how to make the shirt, though. After looking all over for a royal blue long-sleeved shirt in his size, I couldn’t find one anywhere. So, I went totally DIY and somehow managed to sew one with scraps of fabric. (I’m still amazed it actually turned out OK.)

For that first costume, I wanted to make some quick and easy boots that would be comfortable for a small toddler to wear.

I didn’t have a lot of cloth on-hand for making the costume. To make matters worse, fabric stores here in Spain are very rare, small, and overpriced.

Lucky for me, I had a red, old, inexpensive polar fleece blanket and decided to use it for all of the red fabric of the costume.

While it was by accident that I discovered how wonderful polar fleece is for making costumes, it was, indeed, a wonderful discovery.

Why use polar fleece?

The great thing about polar fleece is that it doesn’t unravel, so you don’t have to finish any cut edges.

Plus, it’s lightweight, soft, and stretchy, making it perfect for a kid’s costume.

The stretchiness of polar fleece makes it very forgiving when making these boots. Yet, because it has more consistency than stretchy jersey fabric, it’s a lot easier to work with. (Think- it’s like working with a stretchy type of felt!)

I used the red polar fleece for making the cape, the iconic red trunks (aka. underwear or tight shorts, if you so prefer), and, of course, the boots!

That first year, I cut the bottom section a little too short. So, while they did look pretty cute, they kept creeping up off of his shoes as you can see in the picture above. (You could help remedy that by using double-sided tape to hold them in place, something I haven’t bothered doing as of yet.)

Later on that year, for Halloween, I repeated the same process, making Batman’s boots (This time a little bit longer)!

Batman’s boots stayed in place better. I had made them longer than what I thought I would need and pulled them over the bottom of the shoes somewhat. I didn’t tape them in place or anything, but you should definitely consider it if it bothers you that the fabric can creep up off the shoes.

How to Make DIY Superhero Boots from polar fleece

The superhero boots that I made for both the Superman and Batman costumes couldn’t be easier to make.

1. Place your shoe on its side with the bottom of the shoe along the bottom edge of the fabric. Leave 1-2 centimeters of fabric underneath so that the “boots” won’t ride up and off the shoes when you wear them.

2. Pull the fabric up around the sides of the shoe. Mark where the fabric hits the center of the shoe in both the front and the back.

You will be cutting two identical pieces of polar fleece to make each boot, sewing them together at the center. Knowing where the halfway point is makes the process much easier.

Because polar fleece is stretchy fabric, and we want the boots to stay in place, directly mark the halfway point without adding more room for a seam allowance. (You want these to be slightly small so they stretch to fit in place.)

3. Leaving the shoe on its side in the same place on the fabric, mark a line straight up from the center point you marked at the heel up to the height you want your boots. (It’s actually a good idea to make them a little longer than you think you will want them because you can always cut them down to size later on.)

Continue by drawing another line upwards, parallel to the one on the back and up to the same height you drew the other line.

4. Cut out the fabric, following your markings.

NOTE: If you are using a fabric that has a right side and a wrong side, you will actually need 2 identical pieces and two pieces that are mirror images of those pieces.

6. Place two of your cut pieces together (right sides facing each other, if it makes a difference in your fabric) and sew along both side edges (the front and back of the shoe), leaving the top and bottom unsewn. You’ll end up with a boot-shaped tube.

You can use hot glue to glue along the edge if you prefer.

7. Flip the boot right side out and try it on over your shoe. Make any adjustments as needed.

8. Repeat the sewing process for the other boot.

You have now finished your easy, DIY superhero boots!

I was tempted to use the same method as above, making the boots longer and wider at the top. I decided against it because the seems would then be visible if I folded the top part down.

I did come up with a few ideas about how to fix that, but meanwhile, it occurred to me to try something else…

While browsing in my garage, I saw some red tape and couldn’t help but wonder if it was possible to make superhero boots out of duct tape.

(Once again, I thought I was a genius, but, once again, it turns out I’m not the inventor of superhero duct tape boots!) There are actually already several tutorials showing how to make superhero boots out of duct tape.

But, again, Captain America’s boots are different so I was going to have to improvise anyway.

1. Pick out a pair of shoes to use as the base of your boots. I wanted clunky boots that would be easy to remove, so I used a pair of slightly oversized croc-type shoes.
If you are making narrower superhero boots for one-time use, you can use flats like ballerina type shoes (for girls).

2. Find a pair of socks for the shaft of the boot. If you are making narrow boots for one-time use, tights would be a great choice.

Because I was making wider removable boots, I used a pair of my husband’s old socks for my son’s boots.

3. For narrow boots, put the shoes on, then put the tights OVER the shoes to protect them. You will now be covering the tights with duct tape.

Wrap the duct tape over your shoes and up your legs, covering all areas of the tights/socks. You can even wrap your feet completely, covering the bottoms, to help hold the tape in place.

If using this method, keep in mind that you will have to cut these boots off when you are finished wearing them!

4. For wider boots, place the socks inside the shoes. Then place a wide cardboard tube inside the sock to stretch it out width-wise.

I should now have the shape of a boot.

4. Cover the shoes and socks with duct tape. Crisscross the duct tape, completely covering the shoe and the sock. Continue upwards to the desired height of the boot.

5. Finish off the top of the boots: For regular boots, you can cut off the excess tape (and any excess sock material) at the top. Or you can just wrap tape over the top edge.

That’s all there is to it! Your superhero boots are done!

Making boots with a cuff

Captain America’s boots are a bit tricky in that they have a cuff on them. The cuff was actually harder to figure out than I thought it would be (but simple once you know how to do it).

I first tried to make the cuff out of a straight tube of thin fabric covered with duct tape. Because the cuff of Captain America’s boots flares out, my first attempt didn’t give me the look I wanted.

What you really need to do is to make a wide cone of either paper or cloth, cover it with duct tape, and then attach it to the top of the boots by wrapping the tape at the top over the edge and into the boots. 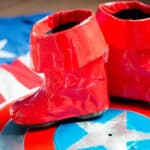 For the polar fleece boots

For the duct tape boots

For the cuff (optional)

*This post was originally published on October 27, 2015. It was updated and rewritten in October of 2019 with clearer instructions, new photos, and more information.