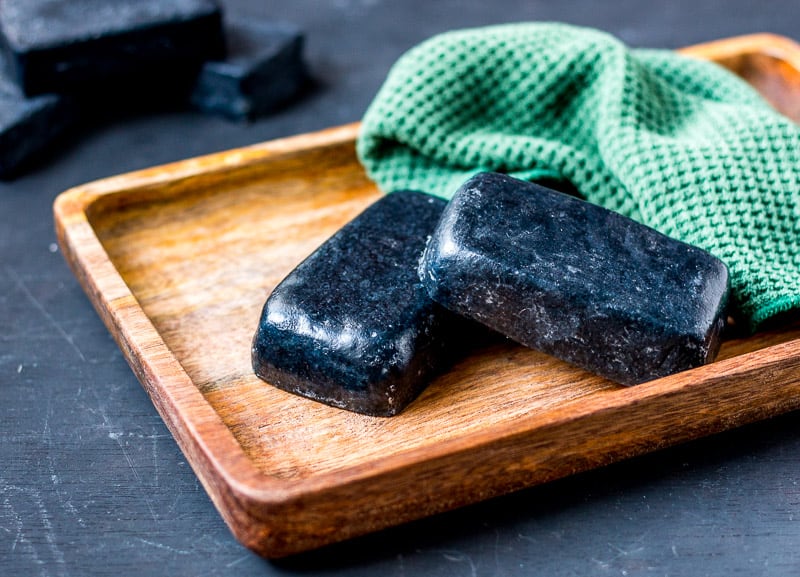 You are here: Home / Make it Yourself / Activated Charcoal Face Soap Recipe
Last Modified: January 26, 2019 // by Tracy Ariza, DDS // August 26, 2016 I may receive a commission if you purchase through links in this post. Learn more here.

This activated charcoal face soap recipe is simple enough for beginner soapmakers, yet results in an impressive bar of cleansing, yet moisturizing face soap. 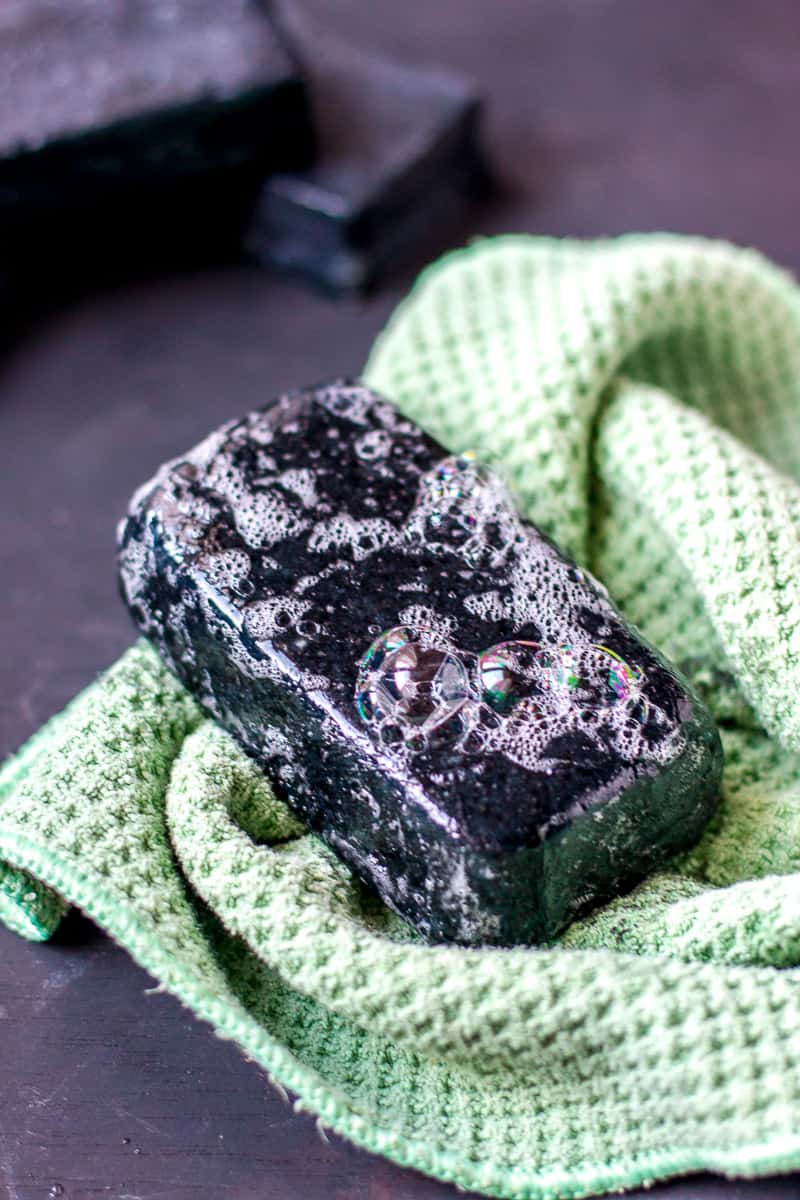 I’m really excited to share with you today’s new soap recipe. I’ve been doing more studying on the oils used in soapmaking, along with some of the other ingredients, and think that I’m getting better at developing soaps that have a good balance of cleaning, moisturizing, and lather.

Just because I’m using a few more oils and ingredients than I did in my easy beginner soap recipe doesn’t mean that this soap is difficult to make by any means. This recipe is simple to make, but looks super impressive if you want to get ahead of the game and make some bars as nice Christmas gifts.

I have to admit that I studied BEAUTYCOUNTER’s Charcoal Cleansing Bar ingredients when I was looking to formulate my own activated charcoal face soap recipe.

At the time I was one of their consultants, and wasn’t trying to copy their formula; I just used it as a bit of inspiration. There were people asking me to come up with a cheaper alternative to that specific bar, and I was curious as to what was so special about it.

Should you buy the Beautycounter charcoal bar or make your own charcoal face soap?

Well, it all depends. If you aren’t already making your own products, and don’t have a lot of the ingredients on hand, you may not save much money, at least not in the first batch. The Beautycounter charcoal soap bar should last you at least for several months, so it really isn’t a big expense on a daily basis.

I chose to make my own activated charcoal face soap because I love making soaps to begin with. Elaborating new soap recipes has become a creative outlet for me, and I take each new recipe as a bit of a challenge. Seeing as I had most of the ingredients already, and knew I’d be able to use all of the ingredients in other recipes, it wasn’t much of an expense for me.

So, why did I study the ingredients in the Beautycounter charcoal bar?

1. While I haven’t tried it myself, I’ve heard from friends that it works really well on blackheads and breakouts, and that the soap is one of their best sellers because everybody loves it so much!

2. From what I studied when I was a consultant with them, it seemed to me that they spend a lot of time investigating their ingredients, looking for the safest yet most effective ingredients in all of their products. Knowing that, I figured that using their ingredients as a guideline would really help me formulate my own great soap.

Why haven’t I tried their Charcoal Cleansing Bar yet to compare it?

Unfortunately, Beautycounter doesn’t sell to Europe as of yet, so I have to order and send to my parents’ houses in the US whenever I want a new product. My last order of products was placed in June when I travelled to the US to pick it all up. As much as I love using those trips to stock up on new products, I try not to go overboard either. As it was, we had to pay for another suitcase on the way home this trip! 🙂

When I did buy from them, I chose products that are more difficult to make at home. A bar of soap is probably the easiest and most inexpensive product for me to try to make myself.

While I haven’t compared them myself, I was super excited to get the following comment from a reader:

You nailed the charcoal bar!! I cannot tell the difference between my boughten charcoal bars from Beautycounter and my DIY bars ( other than price) The quality of these bars are superb, you did an amazing job!! My girls’ and I are extremely grateful!! That recipe is like gold to us!!

She was wondering when I was going to try to make a copycat of the cleansing balm. 🙂

Hmmmmm- I guess I’ll have to put that on my “to-do” list. 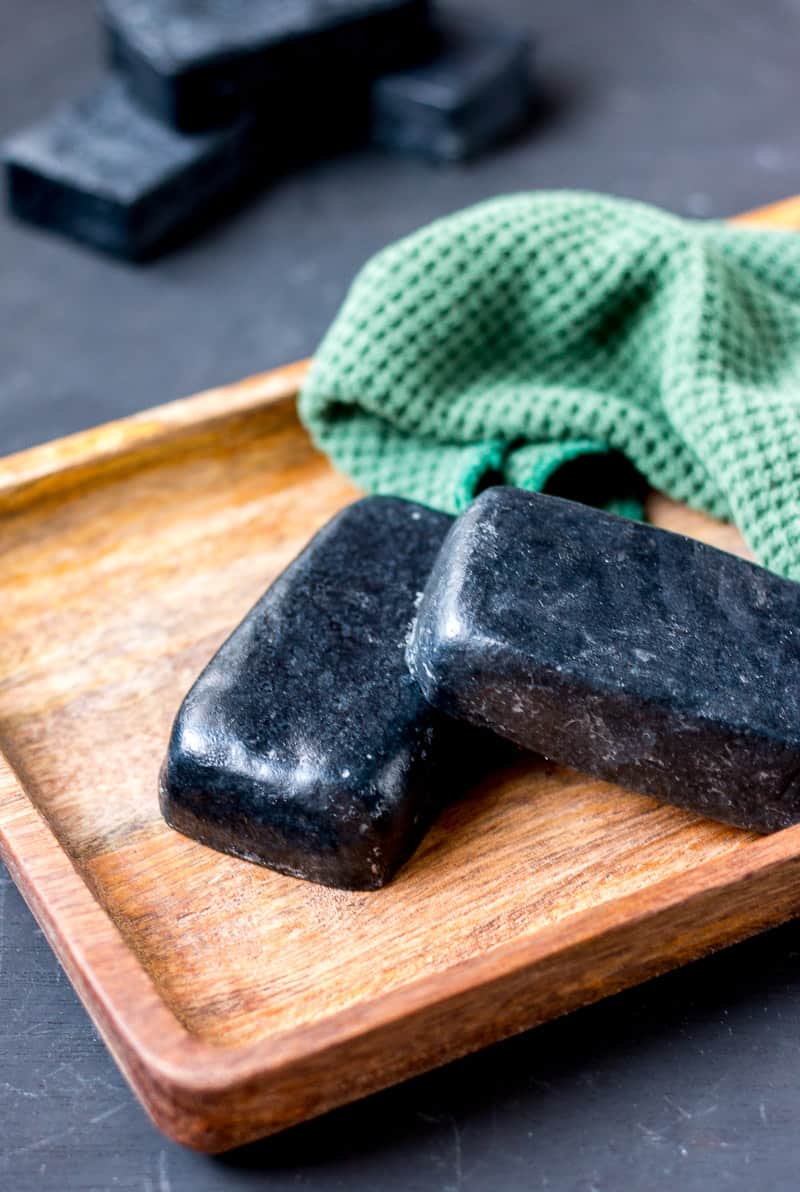 Comparing the ingredients in the charcoal face soaps…

Beginning form the top of their ingredient list, sodium rapeseedate and sodium cocoate are basically just the already saponified rapeseed and coconut oils. That means they have already been reacted with lye.
Coconut oil in soaps is great because it cleans well and adds a great, bubbly lather. I had never used rapeseed oil in soap before, though, so this was a new one for me.

I always avoided rapeseed oil in soap in the past, partly because it’s a difficult oil to find here in Spain, and partly because I had read that it could go rancid more quickly if used in large amounts in a soap. After further study, though, I read that it can a great oil to use in soap, in limited percentages, because it is moisturizing and gives a creamy lather (as opposed to the bubbly lather from the coconut oil). Plus it makes a pretty, shiny, smooth bar of soap.

Because making a soap out of only rapeseed oil, coconut oil and safflower oil was out of my comfort zone, I decided to add some olive oil to my recipe. (Plus, olive oil is inexpensive and easy to find here in Spain.) I added olive oil for its moisturizing qualities, castor oil because it helps make the lather last longer, and shea butter because it’s high in “unsaponifiables,” leaving conditioning oils which I thought would be great for face moisturizing.

Perhaps next time I may try substituting part of the water with glycerin as I’ve since found that it helps give a nice moisturizing quality to soaps, even when they aren’t highly superfatted. That helps give a moisturizing soap that doesn’t feel like it’s leaving a film on your skin. I really love the added glycerin in my recipes for glycerin soap, liquid castile soap, and liquid coconut oil soap.

I wasn’t sure why they would add citric acid to the soap, but after some investigation, I learned that not only does it serve to prevent oxidation of the ingredients which could lead to the “Dreaded Orange Spots,” commonly known as “DOS” in soap making forums, but it also possibly works as a chelator to help fight soap scum buildup. (Dreaded orange spots are a discoloration that can appear in soaps, especially when using certain oils or rancid fats. While it’s a mostly cosmetic problem, it can also affect the scent making the soap smell less fresh. In this case, the black coloring of the charcoal soap would hide any orange spots, but it’s still best to avoid them from forming.)

Because safflower oil isn’t something I can readily find here, I decided to use olive oil, and the other oils mentioned above, instead.

Continuing down their list, I’m not sure about the addition of alcohol. I’m sure they have a great reason for adding it, but since I’m already using different ingredients and don’t know how or why to add it, I didn’t.

I did decide to go with the last two ingredients they added to their bar, though. Green Tea Leaf Extract and Tocopherol (aka. vitamin E) are great antioxidants that are not only great for your skin, but they help preserve the oils in your soap to keep them from going rancid.

Why use activated charcoal in a face soap?

Activated charcoal has become increasingly popular in beauty products lately because it is thought to absorb toxins, excess oils, and help better cleanse the skin.

One of the most common findings after using activated charcoal products is that pores become less visible and smaller, and blackheads start to disappear.

It may also help absorb excess oils in people with oily skin. Plus the black color makes a pretty slick looking black soap!

How do I like my homemade charcoal face soap?

I actually am loving this soap so far. I had planned on adding some rosemary essential oils to my soap bar, but forgot until it was too late, so my bar ended up being unscented.

Rosemary oil extract is used quite often by soapmakers as another natural additive that helps keep the oils in the soap from going rancid, and helps prevent the dreaded orange spots (DOS) I mentioned above. The extract doesn’t have much of a scent, but the essential oil itself does. Rosemary essential oil gives off a nice, natural fragrance and is a potent antioxidant for fighting off rancidity in oils.

If you don’t want to add a scent, though, you don’t really need to add much oil to help preserve your soap longer. A few drops should be enough. You could also leave it out if you wanted, like I accidentally did. 🙂 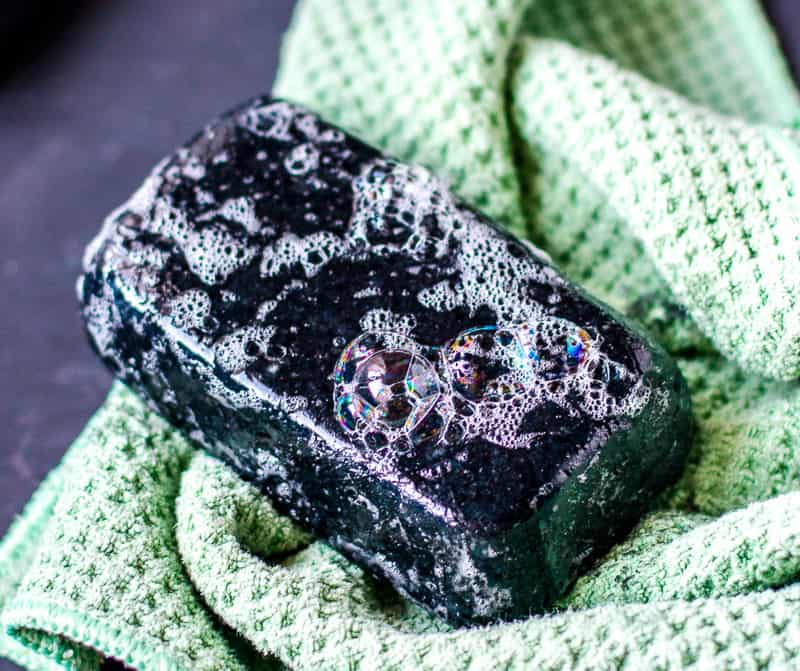 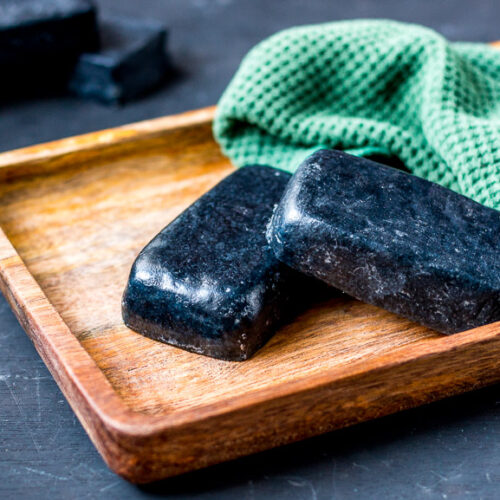 10 Healthy, Refreshing Summer Cocktails and Mocktails
Next Post: How to Make a Healthy Gelatin Dessert (Like Jell-O)