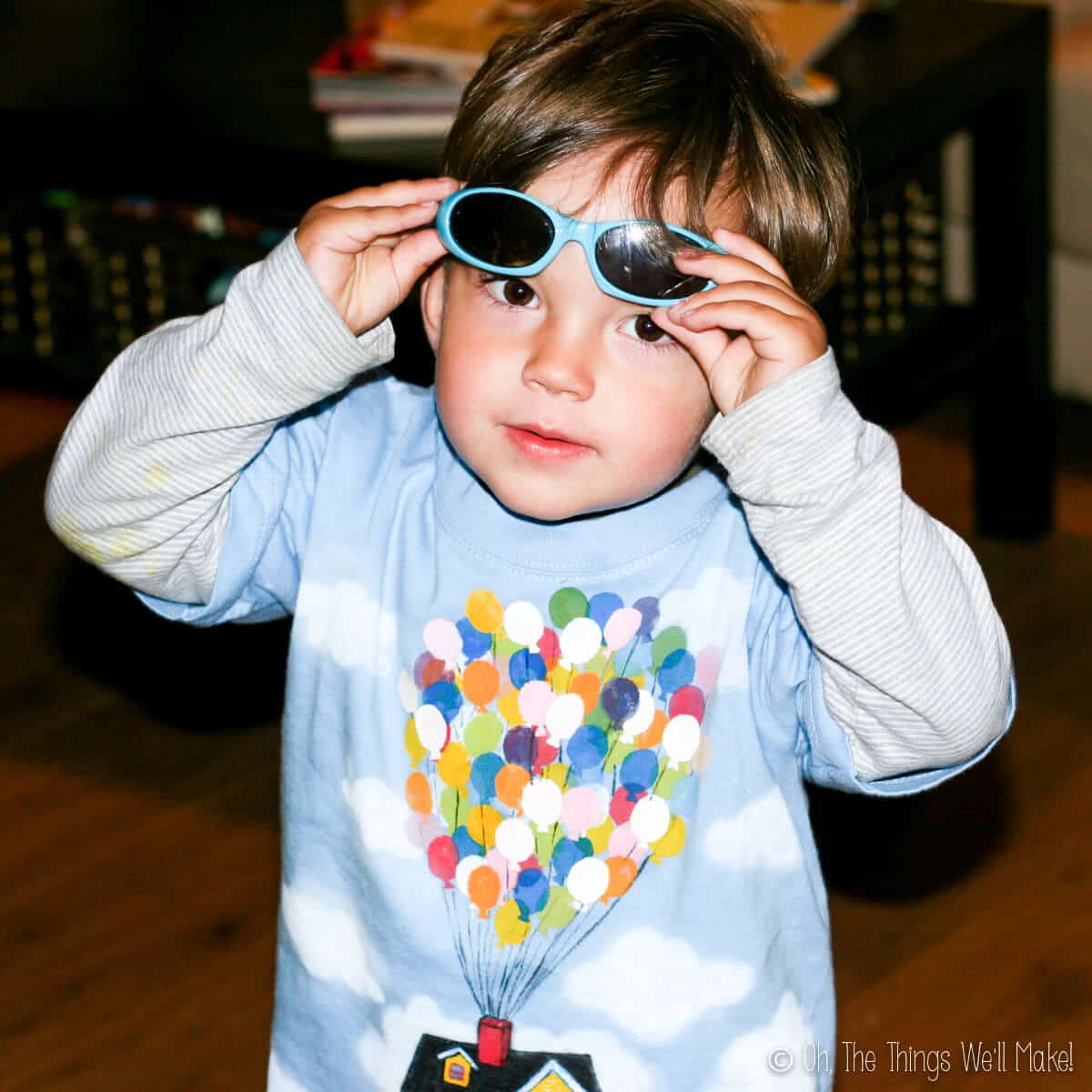 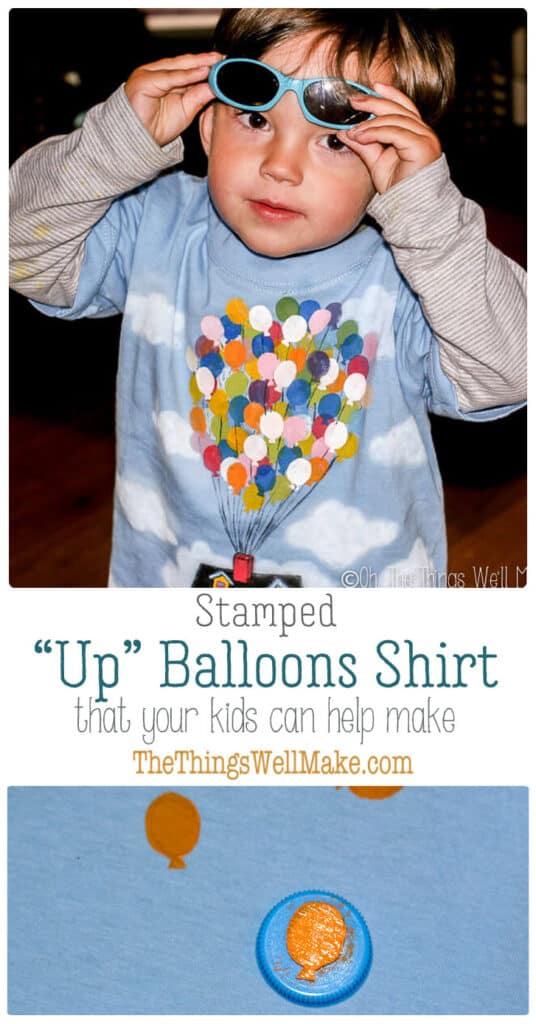 This fun Up house balloons shirt is made with a homemade craft foam stamp, and is so easy even a toddler can help you make it.

Lately, my son has been into new movies other than Wall-E and Cars. One of his new favorites is the movie, Up, which he happily calls “Balloons!”

Since it was the balloons that obviously drew him to the movie in the first place, I decided that I wanted to make him a t-shirt on which he could proudly display the balloons that he loves so much. My idea was to get him involved in the process, so I figured the best way to do that would be to use a stamp for the balloons and to let him help me stamp them on his shirt.

How to make the Up balloon shirt

How to make the craft foam stamp

There are numerous ways to make a homemade stamp for stamping on paint.

Popular choices for the stamp material are potatoes, which, obviously don’t make for a permanent stamp, and erasers, which are nice but aren’t as easy to carve.

My favorite material for making easy stamps is craft foam! It is easy to cut with scissors and can be rubber cemented to any flat surface to make an instant stamp.

When making a larger stamp, I have often used a cd cover as the base of my stamp because it is transparent, allowing me to see where to position the stamp easily. In this case, though, I wanted to use something small enough for small, toddler hands to use, so I chose a milk bottle cap.

To make the balloon stamp, I first drew a balloon onto a small piece of craft foam and then I cut the balloon shape out. I glued the craft foam balloon to the bottle cap to make my stamp.

To get the fabric paint on the stamp, I decided that I would brush it on with a paintbrush rather than have him try to pick up paint in some other way. I figured that would be the least messy and quickest way to do it.

I then let my son help me to stamp some balloons on the t-shirt.

You can see in the picture above that he stamped the balloon on the right by himself sideways right after I stamped on the first balloon. After that, I helped guide him to stamp the balloons in aesthetically pleasing arrangements. He didn’t seem to mind me rudely blocking his creative freedom.

I went into the kitchen to get some water to clean my paintbrush between colors. The stamp didn’t have much paint left on it, so I left it on the table without giving it a lot of thought. When I came back, I saw that my son had continued on the project without my help. (Notice the two small, light orange balloons below the others.)

Maybe I shouldn’t have covered up the balloons that my son had so proudly stamped all by himself, but I didn’t want the shirt to look stained, so I ended up covering them up with the house and clouds later on.

I had considered making a stencil and airbrushing the house as I usually do (I like how the paint is much softer when airbrushed as opposed to applying with a paintbrush). I also considered cutting a house out of iron-on vinyl with my Silhouette Cameo.

In the end, though, I decided to just paint a house on the shirt freehand because I wanted it to be multi-colored. I figured that fit more with the way the movie went, too. She had painted a colorful mural of her house at Paradise Falls over her fireplace, so I decided to paint it too.

I cleaned up the shirt a little by using paint to cover some of the overlapped areas of the balloons.

Even though balloons are partially transparent, I didn’t always want to have the same color balloons on top (which is what happened because we started with one color, painting multiple balloons in that color, before moving on to the next color).

I also wanted to fix some of the balloons that Eric hadn’t stamped down all of the way. I don’t know if I’m making any sense, but that step is optional anyway.

In retrospect, I almost like the artistic quality of the balloons better before I touched them! So, only do that step if you prefer them that way.

Once I was done with all of that, I finished the look by drawing on the strings of the balloons with a black fabric marker.

The shirt needed just a little bit more to it, though.

I wanted to paint on some clouds, which I, at first, sponged on with white fabric paint. My first cloud looked a bit too heavy for my taste, though, so I ended up airbrushing them on, and my airbrush was happy again…

…So was my son, who immediately wanted to put on his shirt and go watch Up for the 267th time (just an estimate, of course).

The only problem is the weather has gotten colder the last few days, so he had to wear it over a long-sleeved shirt, which I had to bring back out of storage. In the next day or two, though, he should be back to being able to wear it as intended. That will make me happy too!!

My son wore the shirt to school and proudly showed it off to all of his friends. When I went to pick him up that afternoon, he was playing with another boy whose mother just happened to arrive just a few minutes later. That’s when the little boy showed his “balloon shirt” to his mom, saying that he wanted her to buy him one too!! I was proud, but actually, a bit surprised by the popularity of his new shirt.

He loved it so much, that he threw a fit the next day when I wouldn’t let him wear it to school again. Toddlers!

How to Make a T-shirt Bag: 8 Ways to Make a Bag from a Shirt
Next Post: Easy, DIY Charm Bracelet for Shoe Charms (Jibbitz)