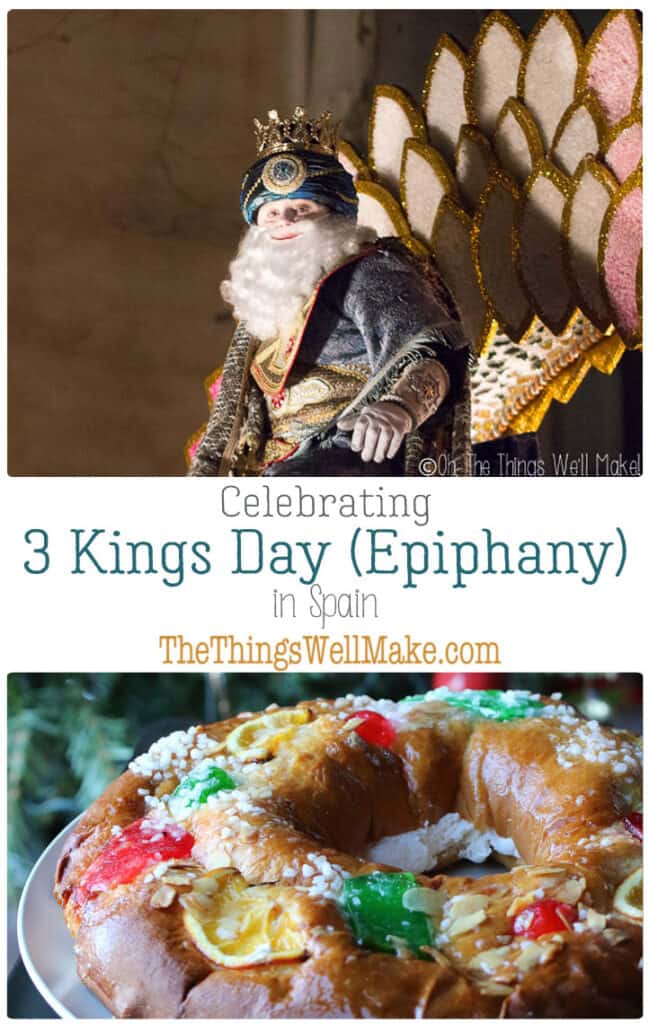 Christmas doesn’t end on the 25th! In fact, that’s when the twelve days of Christmas begin! Christmas ends after Three Kings Day on the Epiphany. Here in Spain, it is called el día de Los Reyes Magos, and it’s a day filled with fun, presents, and great food.

Despite having grown up in the United States, I guess I’ve lived in Spain for so long that it shocks me to see people rushing to take their Christmas trees down right after Christmas.

Why? Because the day after Christmas is really only the second day of Christmas. Until the 12 days of Christmas and the Three Kings Day have passed, there is no way I’m taking down my Christmas tree!

What are the twelve days of Christmas?

If you count the days, you’ll notice that the twelve days can either include Christmas day, the 25th of December, or the Epiphany, the 6th of January, but not both. After a bit of research, it seems that different countries choose which one to include.

In fact, until a few years ago, my husband always had the second day of Christmas off and we’d go out to eat with friends to celebrate with them. Lately, though, the fishermen get Christmas Eve off instead.

What is the Three Kings Day?

Who are the Three Kings?

The Three Kings are also known as the Three Wise Men. Here they are referred to as the “Reyes magos.”

Then somebody asked me about it the other day, and I did a bit of investigation.

Melchior, the fairest of the three, supposedly comes from Persia. Gaspar, slightly darker in color, hails from India or a region nearby. Balthasar, the King with the darkest skin (and my son’s favorite), hails from Arabia.

What happens on Three Kings Day?

While the main holiday is January 6th, the festivities begin the night before. (Similar to Christmas and Christmas Eve.)

On the 5th of January, the twelfth day of Christmas, we celebrate the arrival of the three wise men.

That evening, the 3 wise men parade through the main streets of most cities in Spain. They throw candy to the kids from their various floats (or camels, or however they make their appearance in each particular town). This parade is known as the “cabalgata” or cavalcade.

Like Santa Claus, the 3 wise men come to bring presents to the kids. Just as with Christmas and Christmas Eve, some families choose to give out presents on the night of the 5th, while others wait until the next day.

Many kids also write letters to both Santa Claus and the 3 Wise Men asking for the presents that they are hoping to receive. Some children write directly to all three wise men, while other children choose “their” particular king and write to him each year.

My son chose Balthasar as “his king” when he was younger. I’m not quite sure why he chose one, or why he chose the king he chose, but perhaps it was because of what the other children at school were doing.

Depending on the family, the presents may be awaiting them at home upon arrival from the parade, or they may be brought during the night while the children are sleeping, to be opened the next morning.

Want to send a letter to the Three Kings?

Who brings more presents, the 3 Wise Men or Santa Claus?

In the past, the Wise Men were the main bearers of gifts at Christmas time here in Spain.

Because the kids return to school right after the Three Kings Day, they don’t have a lot of free time to play with gifts that the Wise Men have brought. Presents are usually divided between the two holidays, though, and most kids get a few gifts for each.

We usually choose gifts that need more time dedication (like construction toys) and give those at Christmas. We leave other toys and games for “Reyes.”

Where do the Wise Men leave their presents?

When I was a young girl, we celebrated Christmas in Madrid one year. At the time, most of the people we knew did most of their gift-giving for “Reyes.” They didn’t really celebrate Christmas with Santa Claus yet.

Good kids received sweets and other presents in their shoes; bad kids ended up with shoes filled with coal.

I remember being afraid of the three wise men for some reason. Perhaps it was because they didn’t “know me” as well as Santa did, or perhaps it was the threat of possibly getting coal in my shoes.

What I do remember is that I had to set out my shoes, rather than a stocking, for the three wise men to fill and surround with presents. On the night of the 5th, we headed downtown to see the big parade. During the night the wise men snuck in through our balcony and filled my shoes with presents.

The tradition of leaving shoes out may have been borrowed from the Dutch custom of leaving out shoes for Sinterklaas.

While it is still said to be traditional to leave shoes out for the wise men, I haven’t seen people here in my city continue that custom. The people I know bring out their presents while the kids are out at the parade. The children eagerly return home to find their presents awaiting them.

Again, receiving the presents immediately after the parade may be an adaptation made mostly for practicality: to give the children a few more hours to play with their presents before they have to go back to school. Or perhaps it’s a regional difference.

What does seem to be universal, though, is celebrating the holiday with more great food. People tend to serve the same sorts of foods that they served for Christmas and Christmas Eve.

Also universal is the celebration of the Three Kings day with the Rocsón de Reyes (3 kings cake).

The Roscón de Reyes is a ring of sweet bread that is decorated with candied fruits. It is often filled with whipped cream, chocolate whipped cream, pastry cream, or other fillings.

In the US, a version of the king’s cake can be seen at Mardi Gras celebrations.

The roscón is normally sold with a gold paper crown and also usually has a couple of hidden treasures inside.

Inside the roscón de Reyes

Two objects are traditionally hidden within each roscón.

One is normally a porcelain figure, often depicting one of the Three Wise Men.

If, when eating the roscón, you end up with the figurine in your piece, you are supposed to be crowned king! And, yes, that means that you can wear the lovely paper crown that came with your cake after trying to wipe away all of the whipped cream all over it. 🙂

Most of the time, though, the roscón also has a not-so-lucky item hidden inside. The “unlucky” treasure is usually a dried bean. If you end up with the bean in your piece, you are supposed to pay for the cake.

I decided that one year to make my own roscón. Unfortunately, it didn’t turn out exactly as I wanted so I never shared it on the blog. I added too much flour and had a problem with my oven. The circuit breaker of my oven switched off when I was baking it, and I didn’t realize it until my roscón had been sitting in a turned-off oven for quite awhile. My roscón ended up having a drier crust than it should have, and wasn’t as light and airy as I would have liked. At least the flavor was good, and my son loved it!

At first, he was just checking it out…

Then he started licking it!

Once I master the recipe for the roscón itself, I will share it with you. At Easter, the same bread is made in a different form, so perhaps I’ll experiment again with the dough.

For now, though, now that “Reyes” is over with, expect to see more healthy recipes for a while. I need to detox!

This post was originally published on January 7, 2014. It was rewritten in December 2019 to give more information about the 12 days of Christmas and how the holiday is celebrated.