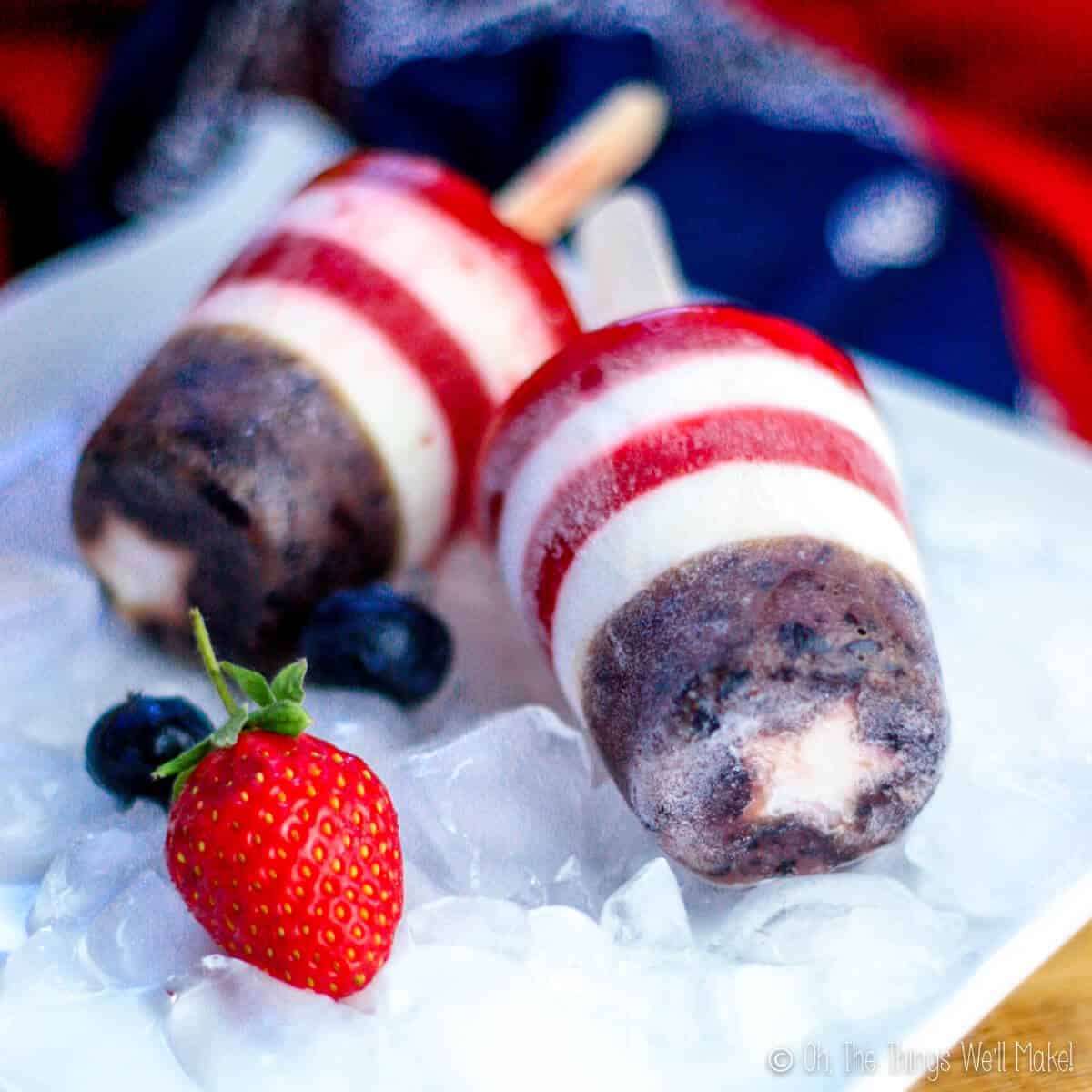 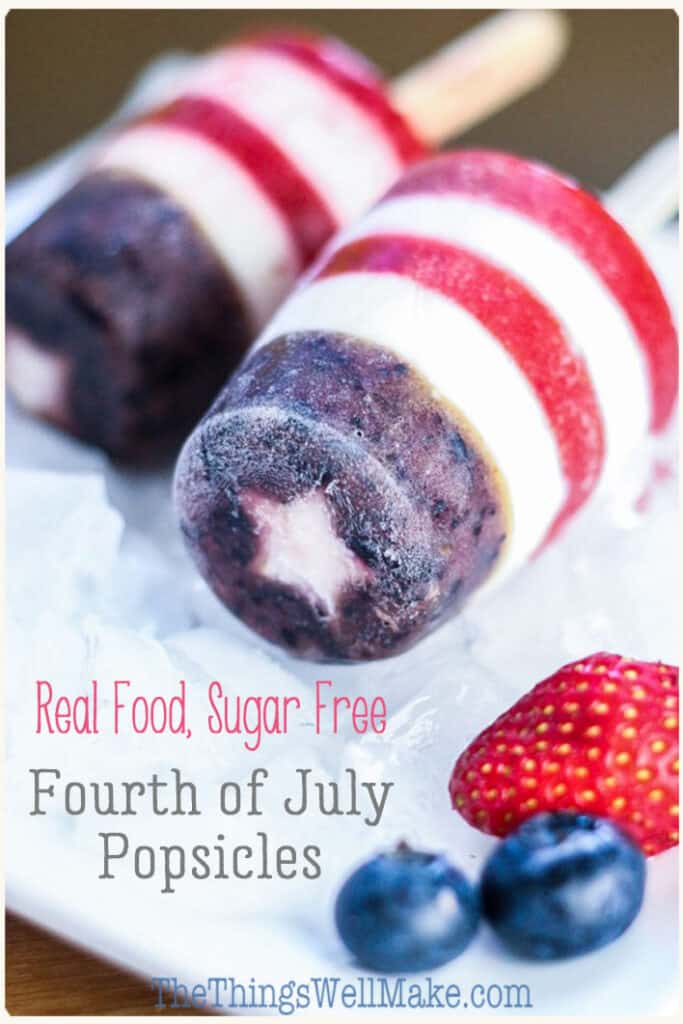 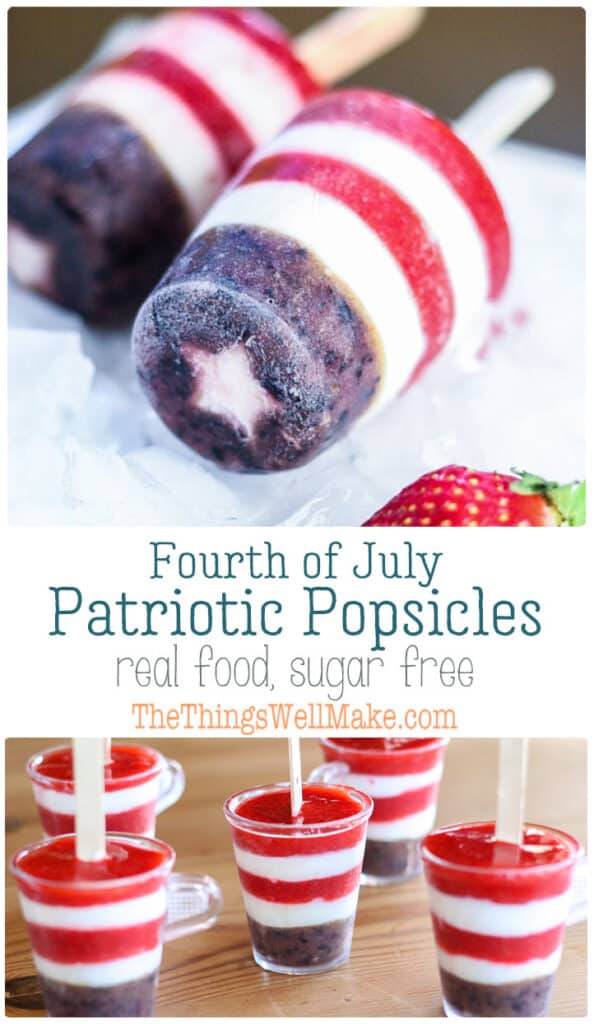 These naturally red, white, and blue patriotic popsicles are healthy and easy to make. They’re perfect for celebrating the fourth of July or any time you want to show off your patriotism.

With the coming of July, comes a beloved American holiday, Independence Day (aka. the Fourth of July).

When I first made these popsicles for the blog, we were in the midst of a FIFA World Cup celebration. Spain had already been eliminated that year, but the US team was still in the competition. (That was quite unusual after Spain had won the last 2 major cups.)

With my German and French neighbors waving their countries’ flags in support of their teams, I also wanted to do something in support of my homeland.

So, the patriotic popsicles were born!

I decided to use real food ingredients to make healthy popsicles. Over the years, I have made these in a variety of ways, with a variety of fruits and other ingredients. Check out the different ways you can achieve the perfect red, white, and blue for your popsicles…

When I first made these, I opted to use fresh strawberries to make a beautiful red pureé for my popsicles.

While I love the shade of red achieved by using strawberries, other red fruits also work well. Last year, when I couldn’t find fresh strawberries at the store, I chose to use raspberries. They were delicious and just as pretty!

If you can’t find fresh berries, you can also use frozen. (That’s what I used this year!)

The white stars and stripes

For the white parts, I chose to use some homemade yogurt. Milk kefir also works well.

If you want to make dairy-free vegan popsicles, try using vegan yogurt. Coconut yogurt is a great option. You can also just use coconut cream or even homemade coconut milk.

For the stars, I used a star-shaped ice cube tray filled with yogurt. If you don’t have star-shaped trays, though, try cutting stars out of thin slices of apple or pear. (Star-shaped cookie cutters make it easier, but you can use a knife too!)

If you want a brighter blue, consider adding some butterfly pea flower powder to the puree (also sometimes called blue matcha). You can also try one of the other blue natural colorings from my homemade food coloring post. (In the end, though, I didn’t notice much of a difference when I added it.)

First choose a suitable mold. If you want to add a white star to the bottom of your popsicles, like mine, you’ll need to find something with a flat bottom.

I used a set of small, plastic coffee cups that they’d given me when we bought our coffee maker. I’ve also done this with disposable cups I had left over from a birthday party. They worked well too.

First, you need to make the white stars. You can either freeze yogurt or coconut cream in star-shaped ice cube trays, or cut out stars from slices of pear or apple.

When the stars have frozen, remove them from the ice cube tray and place one in the bottom of each mold. Pour the blueberry puree over them, and place the molds in the freezer.

When the blueberry puree has frozen solid enough to hold its shape, pour a thin layer of yogurt over it. You can choose to use sweetened or unsweetened yogurt.

If you try to add the yogurt too quickly, some of the blueberry juice may run up the edge which can ruin the look of the white stripes.

Once you freeze the yogurt, the sticks should stay up on their own.

While the yogurt is freezing, prepare a strawberry puree by blending some strawberries (or raspberries) with a blender. You can sweeten the puree if you like by adding a sweetener of choice. (We normally leave ours unsweetened.)

When the yogurt has frozen enough to stabilize the popsicle sticks in place, pour a thin layer of strawberry puree over the frozen layer of yogurt. Place in the freezer again.

Once fully frozen, your popsicles are ready to be served!

To remove them from the molds more easily, run some warm water over the sides of the molds. Gently twist, until you can easily remove the popsicles.

Adjusting them to taste

Just as you can switch up what you use for the various colors of the popsicles, you can also make other adjustments to have these suit your taste.

For example, I didn’t use any sweeteners for my popsicles, but I realize that most people are going to want a sweeter patriotic treat. If you have a sweet tooth, you will definitely want to add a sweetener, especially in the yogurt and strawberry layers. My husband felt they needed a little more sweetness, so he ended up drizzling some of my homemade “magic shell” over his. I think it’s a weird combination, but he loves chocolate on just about anything.

If you want these popsicles to be sweeter, you can sweeten them with honey, maple syrup, stevia, or another sweetener of your choice.

Keep in mind that frozen foods taste less sweet, so make them slightly more sweet than how you’d want to eat them unfrozen.

Also, I chose to make only 4 stripes, but you can keep layering the white and red layers as many times as you like! (It will, of course, depend on the size of the molds you are using too. )

To ensure clean borders between each layer, fully freeze the current later before adding the next one.

In order to fully appreciate the white stars on the bottom of the popsicles, make sure to use cups or molds with completely flat bottoms.

If, when you remove the popsicles from the molds, the white star is somewhat covered by blueberry purée, you can easily expose the stars by slicing off a thin layer off the bottom of the popsicles. (See how I did it at the end of my video.) 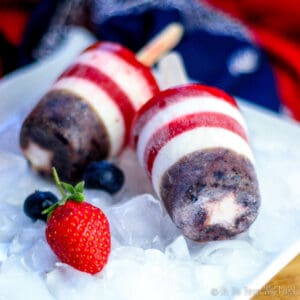 This post was originally published on July 1st, 2014. It was republished in July of 2021, adding new photos, video, and more tips and tricks.